Fishing Tails > All Articles > Reports > Chesil Beach > The best fishing I have known for years.
The Bass are starting to show in better numbers The best sea fishing in the UK has to be around Portland & Weymouth 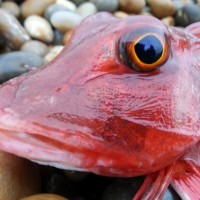 The best fishing I have known for years.

Anglers often ask me when is the best time of year to fish, and my reply is always September and October. This year it has been exceptional, I can’t remember when fishing from the shore or boat has been as good as it is at the moment. I went out on the Boat yesterday to catch Bass. We stopped to feather up some bait, during which time I caught a double shot of Scad and Cod, then Mackerel and Pollock. A quick move and we managed a few Bass. When the tide dropped off we decided to go for some Bream. Within minutes I had my first Bream on the boat, followed by a Cuckoo Wrasse, then a Pout and some more Bream. To catch 8 separate species when I was only really targeting Bass and Bream is what I call a good day.

If you think I had a good day, then Kevin Webb had a brilliant day on Chesil. During one evening session he managed 3 codling, 5 smoothound, 2 dogfish, 18 black bream, 5 gurnard, 5 mackerel, 1conger, 3 pout, 2 whiting and a red mullet. It is not often days come along like that, so I can only say well done Kevin.

Chesil Beach forecast: I am lucky enough to be guiding a few days this week, so Chesil will be one of the marks I will be fishing, and I am pretty happy about it. Your chance of finding Bream, Gurnard, Plaice, Red Mullet and Trigger fish are high. It is not so good on the Mackerel front, as there does not seem to be many around, even from the boat. Garfish on the other hand are prolific.

Mullet are starting to shoal up around Chesil Cove and Ferrybridge. If you get some ground bait in to the water you should be able to draw them in and catch them on Mackerel strips. Best ground bait is Mackerel minced or squashed up and mixed with some breadcrumb. Just don’t let your other half catch you in the kitchen with the food processor 🙂

The best baits for Chesil at the moment seem to be a Squid and Peeler Crab for the Bream and Triggers. Mackerel strips for Gurnard, Mullet and Garfish. For Plaice use Ragworm or Lugworm and plain old Lugworm for the Red Mullet and Cod. If you are targeting the larger species such as Bass and Rays then a large flank of Mackerel or a whole squid would be a good choice.

Portland: Wrasse fishing is still very good all around Portland, but the Pollock fishing seems to be concentrated on the East side. Fraser Monro reports a few Pollock falling to a Dexter Wedge. He has been testing out the new Redgill Evo Stix’s, so hopefully I might be able to persuad him to write a review of them.