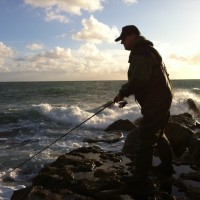 The Sprats are in and the fish are feeding heavily on them. I have been fishing every day for the past 10 days and I can’t remember seeing so many Sprats being chased by so many predators. The surf line has been alive with Bass, Mackerel, Garfish and all around the rocks the Pollock have been hitting them as well. I am sure the Cod are in there too. It would be good to get one of them on a lure from the shore. I have seen loads of Cod caught over the past week and I have managed quite a few myself on the rare occasion that I have been bothered to sit behind a couple of beachcasters. I have had far more fun hunting down the Bass that are in abundance. It is by far the best time for Bass and hopefully they should stay around until December. In the last 3 days of guiding we have managed to catch more than 60 Bass on lures. The highlight of my week so far though was when I managed to catch a Allis Shad from the beach on a lure.

I have been going on for months about how good the Seaspin range of lures are and yesterday was a perfect example of how versatile a range they are. I was guiding with a client and was joined by a good friend of mine, Elliot McBryde. We were fishing a rock mark that meant we needed to have a lure that would work just over the top of the shallow rocks and weed. We had two choices an IMA Komono II or the Seaspin Coixedda 100. At half the price the Coixedda had to be the number one choice for both myself and Elliot. He opted for an orange over white belly and I went for the silver Mullet version. The lures cast very well despite the wind and almost first cast Elliot had a knock. This was followed on the second cast with a Mackerel and on the third cast a nice little Bass. My client Sandy, managed to hook and lose 3 fish before finally landing a Garfish, whist I was also into a Bass at the same time. After catching a Garfish Sandy hooked into another fish the next cast and this time he managed to land a Bass. For Elliot it was almost a fish a cast until his line caught on his line clip on his reel and sent it flying out to sea. To say he was gutted was an understatement. All was not lost as I lent him my silver Mullet Coixedda after I had changed to a yellow and orange one. We had a manic half hour of non stop fish until the tide and large waves pushed us back from the edge. It was time for a different type of lure that would allow us to fish at the same depth but from a higher angle. Out of the box comes the Mommotti. A slim minnow type lure and straight away I was into fish. Unfortunately for Elliot he didn’t have one in his lure box and despite changing to several others he didn’t manage another fish. 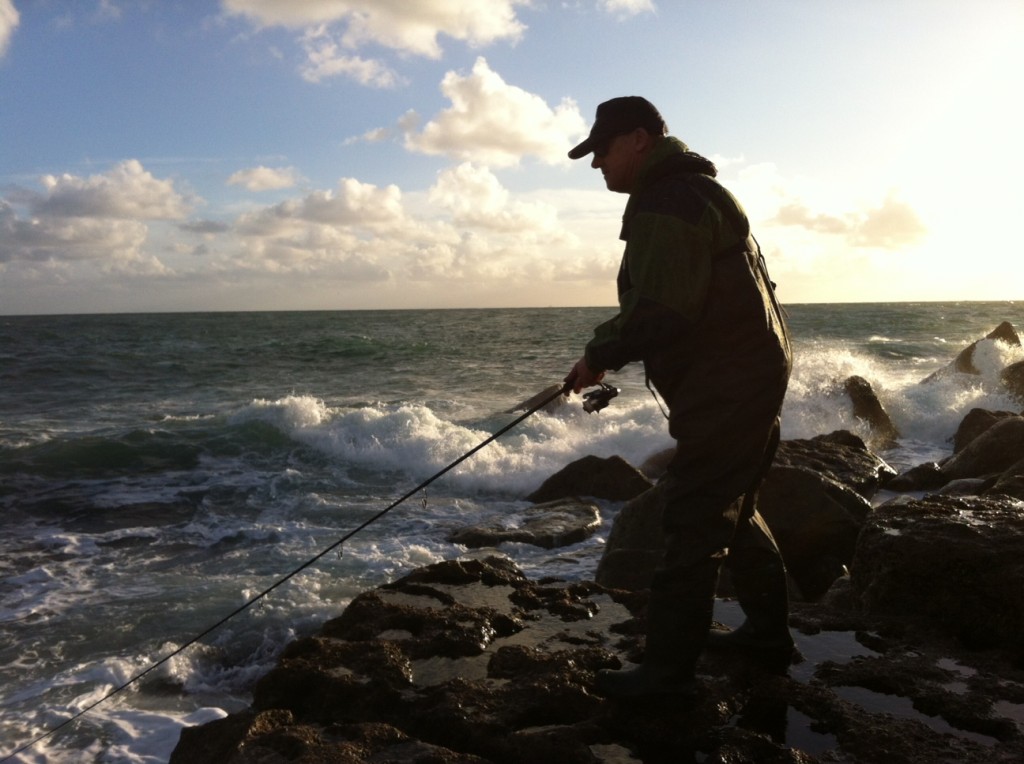 Rough conditions on the rocks

As the water levels increased we were pushed on to a much higher ledge. This time we needed a lure with a bigger lip to bite into the water from such a high vantage point. I opted for a silver with a black back Seaspin Buginu 105 biu, which is a 105mm jointed lure. I was worried that the small size and relatively light weight would mean a cut down casting distance, but it cast really well. The bib allowed it to dig into the water and swim perfectly. Sandy chose a Zonk 120 and managed to get a Pollock with it. I managed another couple of Bass on the Buginu before we decided to call it a day. A fantastic session that made up for what had been a quite early part to the day. I can not recommend the Seaspin range highly enough and the best thing is the finish is great but they cost about half the price of an expensive lure. 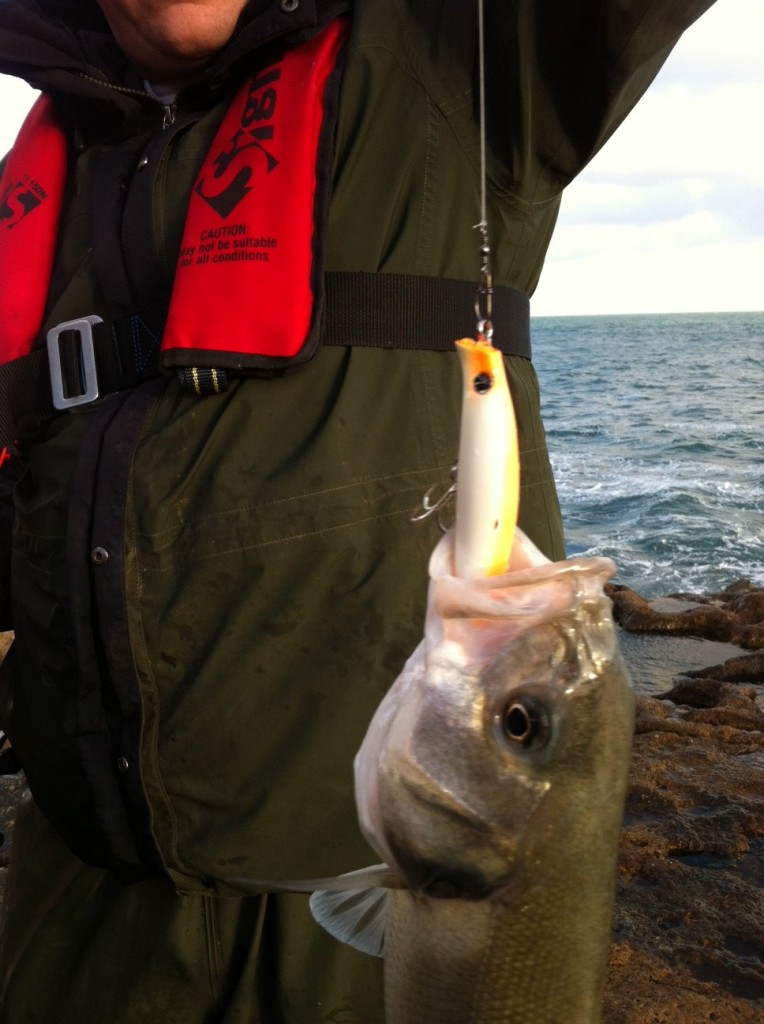 Portland: Rough with some very large dangerous waves. The water is slightly coloured.

Weymouth Bay: Calm but the water is still holding colour

Chesil Beach forecast: Bass and Cod would be the main target fish for today if you can get on the beach at all. I for one will be staying clear of it.

Portland: No Wrasse today but Pollock and Bass on lures if you can fish one of the ledges that are safely above the water level. I always wear a lifejacket of flotation vest if I fish in these conditions.

Portland Harbour: One of the better options for today. You can find plenty of shelter along Hamm beach or down at Sandsfoot Castle. Ragworm will produce Bass and Flounder with the odd Wrasse in the reefy areas.

Weymouth Bay: Stone and Pleasure Pier will produce some nice fish and you never know what it will throw up. Garfish, Pollock, Mackerel and Bass plus Flounder and Wrasse. The water inside the harbour is too dirty for any Mullet fishing.

Guiding:  A few extra guiding days have become available for Bass over the next two weeks. Don’t miss out on this fantastic opportunity to catch some of the best sessions before they disappear. I have a couple of more sessions available in October mainly for Bass fishing but I might be persuaded to do a bait session for Cod or a late Plaice. As I mentioned earlier there will be a very few Cod or bait fishing days in October and will be based around what I believe are the best tides. I am taking bookings for both Bass and bait guiding sessions for November. Don’t miss out on the best months fishing. These can be tailored to your requirements including mixed days of bait and lure fishing. Drop me an email for more details sean@fishingtails.co.uk