Fishing Tails > All Articles > Reports > Chesil Beach > This could be the best fishing weekend of the summer!
Temple Reef Mytho Rod review Sole fishing at Southbourne 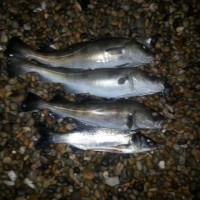 This could be the best fishing weekend of the summer!

Cod, Cod and more Cod. No this is not a cut and paste report from last winter! I have been gathering in the reports over the past two days and the Cod, along with the Rays have been featuring heavily. The stiff South Westerly winds have been churning up the shore on Chesil, creating a swell of almost 2m. This has made the water coloured. Far from ideal if you are after Mackerel, but brilliant for Bass and Cod. I had a message early yesterday from Robert Raybould, asking if I thought Abbotsbury would be fishable. Knowing that he was was a decent Angler I said yes. A few hours later I started receiving messages and pictures of his catches. In the end he managed 3 lovely Cod and a Bass. He lost a double figure Cod in the surf when his tapered leader snapped. 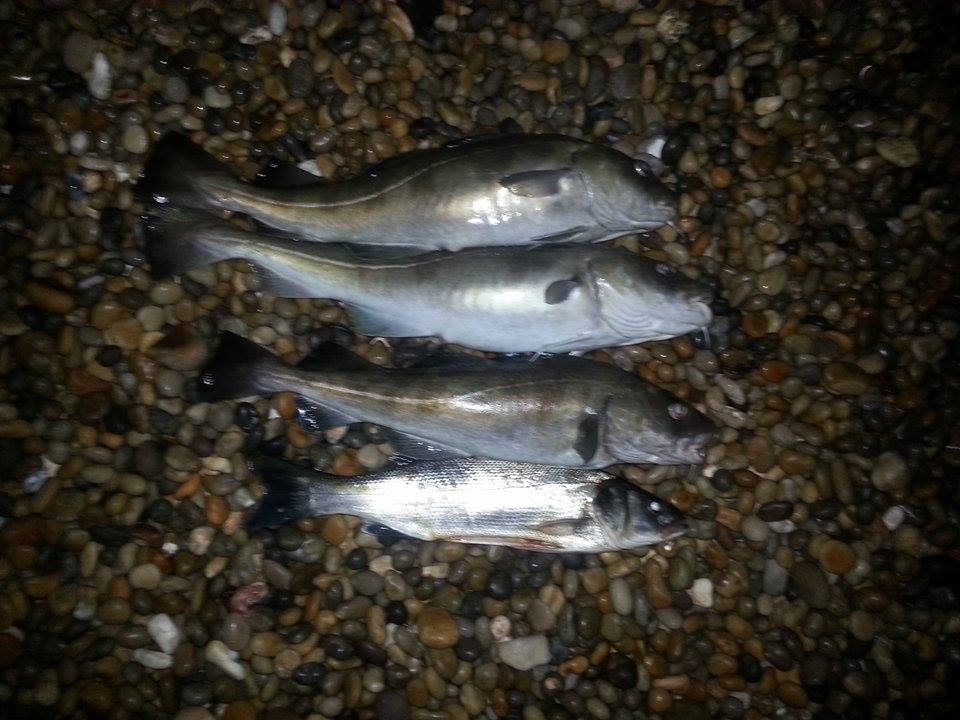 On the note of fish lost to tapered leader, I have also lost two decent fish to them this year. I would like to hear other peoples views on tapered leaders, just leave a comment.

Angler Ian Clarke fished Chesil overnight on Tuesday, with his mate and was rewarded with a nice 5lb Bass. As the sun came up on Wednesday they both enjoyed plenty of Mackerel and Gurnard. 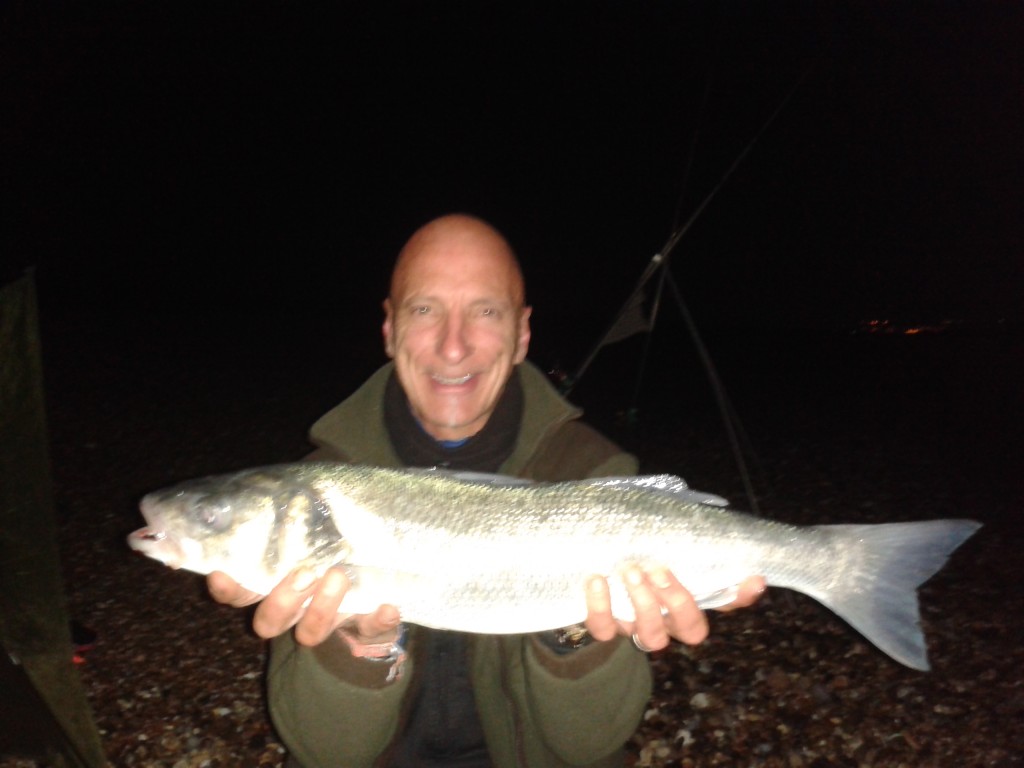 Local angler Matty Mizzen has once more been catching the Rays. Not sun rays, but Undulate and Thornback Rays. After catching two rays of almost 10lb on Sunday night, he returned mid week and started off by catching Codling, before landing this stunning Undulate of 17lb 8oz. 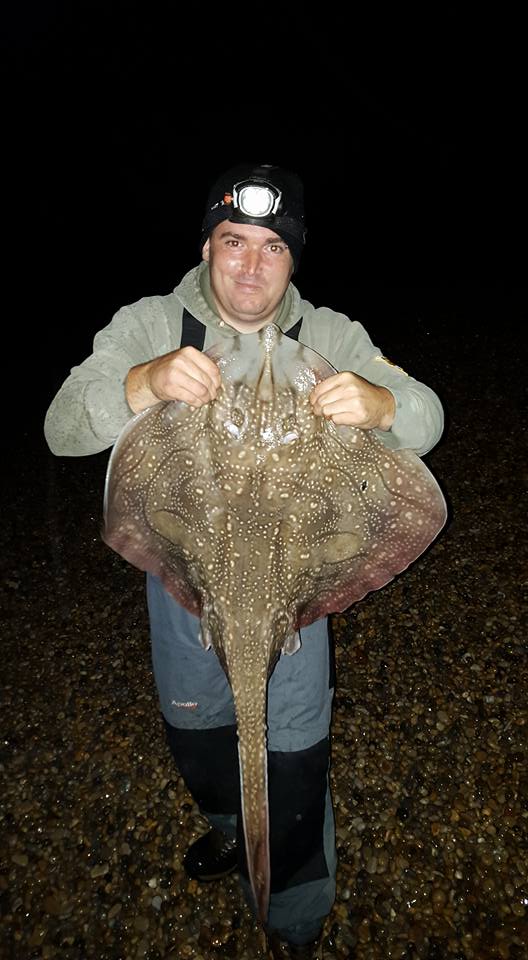 I have just heard the tragic news that a man in his 40’s from the London area, drowned yesterday at West Bexington. Chesil has proved once again how dangerous a beach it can be. There is a strong undertow even in calm conditions. Once you add a swell of even 1/2 a metre it can be very difficult to get back out of the water. Please be careful !

On a more joyful note I wanted to share this short and amusing video, created by fellow Bass fanatic Paul Gordon.

I have fished and guided a lot myself this week, with mixed results. The water colour made lure fishing a bit of a struggle, but we did manage to find some Bass and Wrasse. I spent yesterday fishing with a friend on the Frome, for Brown Trout and Grayling. 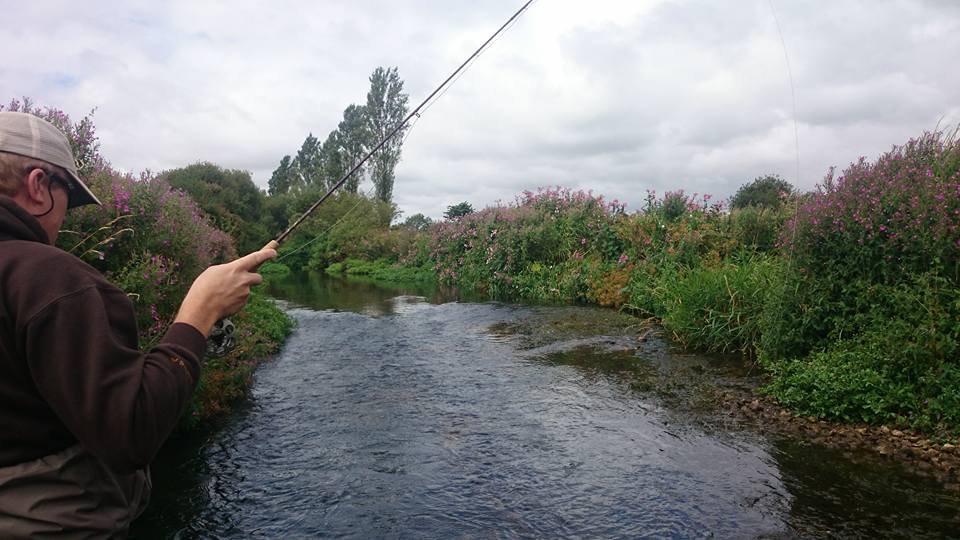 The Trout proved a lot harder to catch than the Grayling on the Fly, but I really enjoyed the tranquility of the river fishing. I am on a mission this weekend to catch a Carp on a fly. I have been given advice on a number of patterns to try for them, so I will let you know how I got on in Mondays report.

Chesil Beach forecast: If you are lucky enough to be able to have a few hours spare this morning or early this afternoon, then it is well worth getting down to Chesil. The water is still coloured, but the wind has dropped to almost nothing. Now is the time to grab a Bass, Cod, Ray and Smoothound all in one session. Opportunities like this don’t come along very often, and it wont last long either. By late afternoon the water will start to clear.

Once the water does clear you can expect Mackerel, Bream, Gurnard, Red Mullet, Plaice and Smoothound. As I mentioned in the title, it could be a fantastic weekend of fishing.

Portland: As the waters clear the hungry Wrasse will be on patrol looking for food. When the water is coloured and there is a heavy swell, the Wrasse have problems finding food. Once it starts to clear they will feed aggressively once more.

The Pollock wont show in numbers until the water is clear again, but night fishing should produce Conger, Rockling, Pout and the odd Bass. Big fish baits such as Mackerel or Bluey normally produce the most fish.

Portland Harbour: This was one of the better marks for Bass over the past few days. All mine fell to lures, with the Seaspin Pro-Q 90 and 120, taking most of the fish. As the tides start to fall away the harbour never fishes as well. You can still expect Mullet and Flounder.

I have not tried to catch any Gilthead Bream from the harbour this year, but this is normally the time that they are around. Shellfish baits and Lugworm work well. I like to fish them on a 2 hook flapper rig with size two hooks.

Weymouth Bay: Both pies will be busy over the weekend, as they will produce lots of small fish. The Stone Pier is always good for Wrasse. Float fish from either pier for Garfish, Pollock and Mackerel. Set the float to around 6ft, and use a small sliver of Mackerel.

Dabs and Gurnard can be caught from the sandy beach at Preston and Bowleaze. However they are popular with swimmers, so avoid them during the day.[codepeople-post-map]

2 Responses to "This could be the best fishing weekend of the summer!"