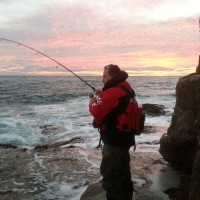 It feels like the colour is never going to drop from Chesil. I fished it yesterday near Ferrybridge. It was pretty calm because of the Easterly wind, but there was a 2m swell. The water is still a light brown making it useless for lure fishing. I could see a lot of baitfish activity very close in. There was lots of fish feeding as I had a Pout or Dogfish almost every cast. The guys fishing next to me had the same plus some Whiting. One Whiting he caught was the longest shore caught one I have seen. It took a live pout. If it had been in good condition it would have easily gone more than 3lb, but it was very skinny.  All in all not a great session for this time of year but with poor tides it wasn’t that bad. I think the building tides from today onwards will see a lot more better fish landed.

Chesil Beach: Calm with a 2m swell, the water has a green milky tinge to it.

Portland: Choppy on the East side and around the Bill. West side is calm with a 1.5m swell. The water is fairly coloured

Weymouth Bay: Small to medium size waves but the water is pretty coloured especially on Preston Beach where there is a lot of surf.

Chesil Beach forecast Lots of fish on the beach during the day, with most of them being Pout and Dogfish and Garfish close in. The Cod seem to be more towards Cogden at the moment rather than at the Eastern end towards Portland where they were last weekend. The Plaice have moved off the beaches around West Bexington and have moved into deeper water. A few have been caught towards Ferrybridge end. No sign of any Bream during the last few days. I hope they have not gone already. I have no idea why, but the number of Conger that have been caught in the last couple of weeks has been incredible. Fish up to 35lb have fallen for all sorts of bait even small Ragworms.

Portland: I might give the beach a rest today and try a few hours on Portland. I should be able to fit in some work around the tides J Target for this morning will be Wrasse, Bass and Bull Huss. I will attempt to get a few nice sized Wrasse on my lure rod whilst waiting to see if one of the big Huss takes my bait. A later session will see me having a go for Pollock and Bass down at Church Ope Cove towards dusk. The other alternative would be the Bill for dusk. I have had a fair bit of success down there recently. 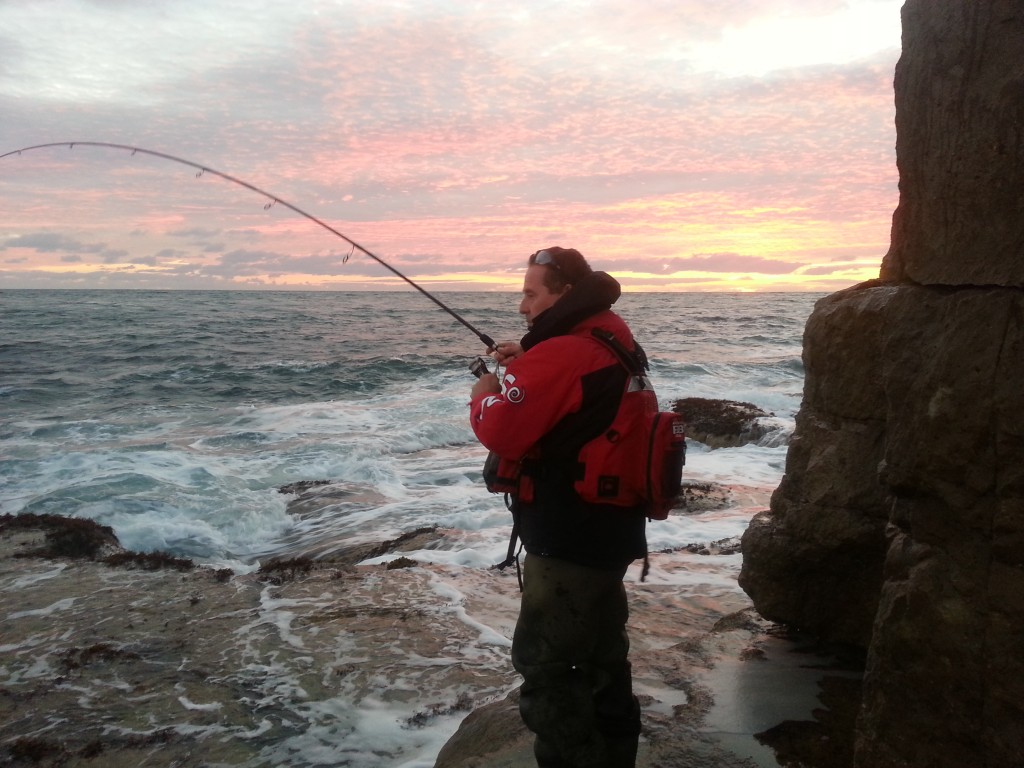 Into a fish on Portland

Portland Harbour: The tides will build over the next few days and when they do the harbour will start to fill up with fish again. Try fishing with Ragworm along Hamm Beach for Flounder and Bass. Use a large fish bait or Peeler Crab to tempt a Thornaback.

Weymouth Bay: Plenty of fishing coming from both piers and reports suggest that there is a few Squid and Cuttlefish around now. It seems as if everything is early this year. Preston could produce a Bass in the surf, but be quick as the wind is due to change round to the SE.

Boat & Kayak fishing: Most of the Charter fleet are fishing the Conger Championships this week. This means that not many boats will be targeting the Shambles or the reefs around it. This year has been one of the best for a long time for Plaice.

Guiding:  I have a couple of more sessions available in October mainly for Bass fishing but I might be persuaded to do a bait session for Cod or a late Plaice. As I mentioned earlier there will be a very few Cod or bait fishing days in October and will be based around what I believe are the best tides. I am taking bookings for both Bass and bait guiding sessions for November. Don’t miss out on the best months fishing. These can be tailored to your requirements including mixed days of bait and lure fishing. Drop me an email for more details sean@fishingtails.co.uk