Fishing Tails > All Articles > Reports > Chesil Beach > Will it be a Cod fest?
Can a tide be too big? Not Tuna but a great day out. 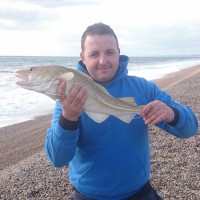 Will it be a Cod fest?

Lots of Cod have been caught from Chesil this week, and I am sure that many of you have planned to come down and have a go for them over the weekend. The question is will it be worth it?

I have fished all week and everyday has seen different conditions. I headed to Cogden on Tuesday, as I knew that the beach would be more coloured there as the wind picked up and churned up the shallower water. I was rewarded with lots of small Bass and the odd couple at 2 and 3lb, but most of the baits were stripped by the Shoolies in no time. THe night tides did start to produce the Cod and quite a few anglers had some good catches.

As the wind dropped on Wednesday and the sea conditions improved, it turned into a Cod fest, with anglers all along the beach catching lots of Cod. What was surprising was that the best bait seemed to be Ragworm and Squid cocktails. I fished next to Ben Collins and a couple of his friends, who had traveled over 2 hours to get to Chesil. They were well rewarded with 7 nice Cod. 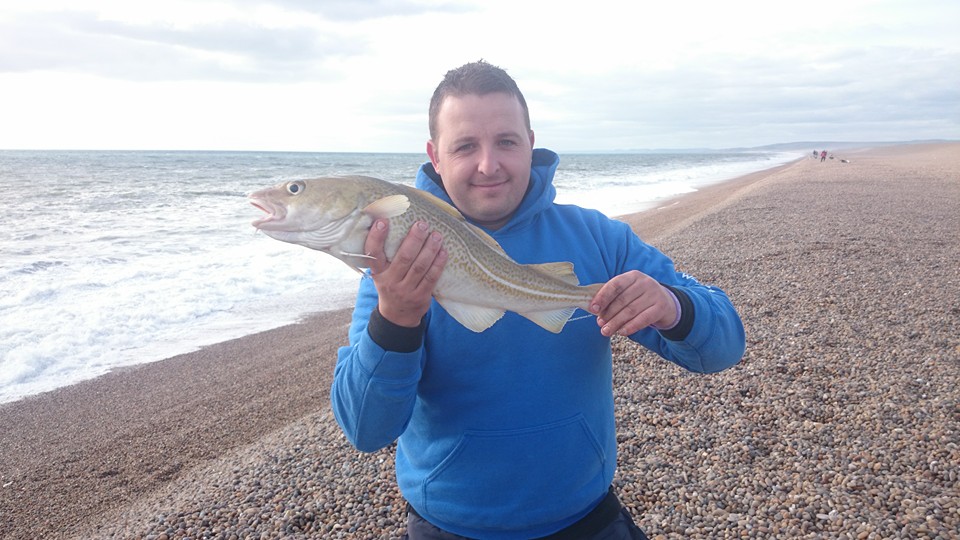 Wednesday evening was even better with loads of reports of plenty of Cod all along the beach. 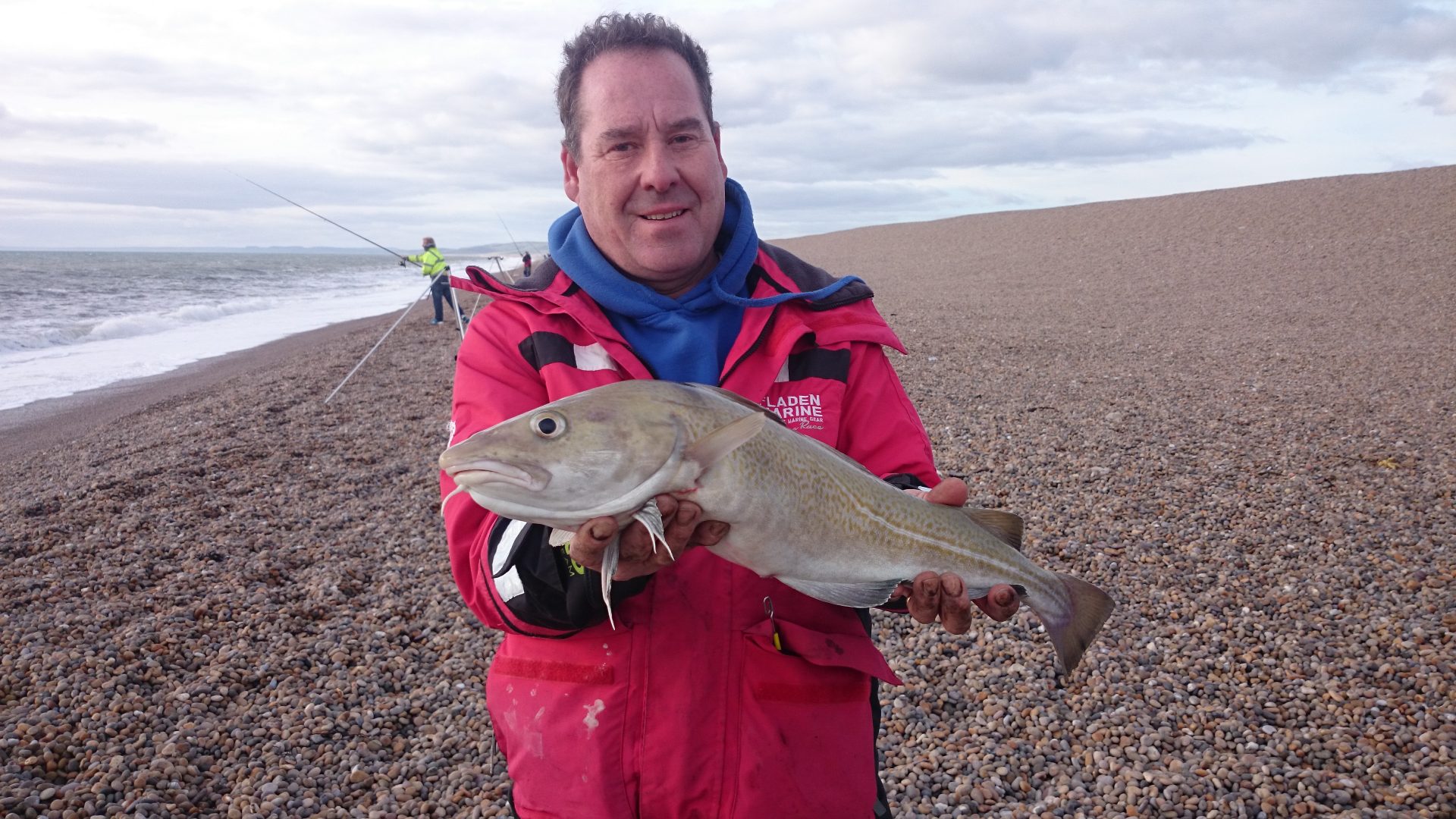 Yesterday could not have been more different. No wind and a much calmer sea. During the early part of the morning the water was pretty coloured, but that rapidly cleared to leave a green tinge. 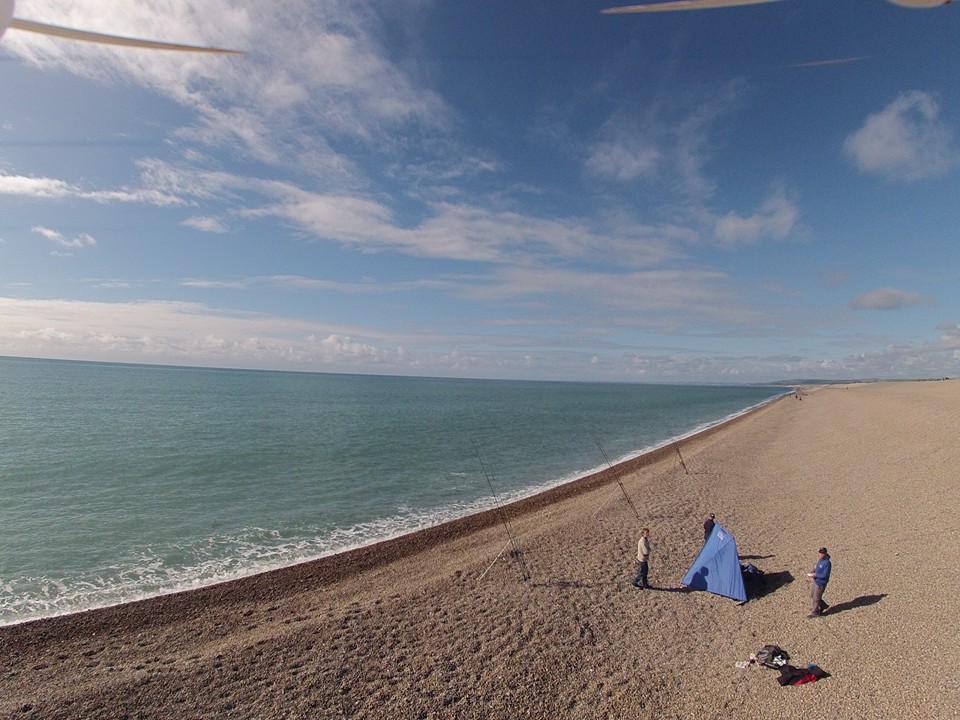 Fishing was very slow to say the least. By mid afternoon I was more confident in catching Bream than Cod, and that is exactly what happened. Even the night tides didn’t produce much other than Dogfish, Whiting and Pout. There was a few Cod caught, but nowhere near the numbers I expected.

The bad news is I really can’t see it being better today. In fact I would say the opposite. It should be ideal for Plaice and Bream, but the Cod won’t be around during the day and once again the numbers will be down at night.

With Easterly and North Easterly winds for the whole weekend, I think the forecast will be similar for Cod.

Chesil Beach: Calm with light colour in the water

Chesil Beach forecast: As I mentioned earlier, don’t expect to catch loads of Cod this weekend. There will be some around and more so at night, but there will be a lot more Whiting and Pout around.

Day tides to the West should bring Gurnard, Mackerel, Garfish and Plaice. Numbers of Plaice have been good from West Bexington and Cogden.

Portland end will be good for larger Plaice, Bream and even some small Smoothound. Mackerel are still around in reasonable numbers and the Garfish are numerous. So even if you don’t get any Cod there are still some nice fish to be caught.

Portland: Wrasse fishing is really good at the moment. THey always feed hard after the water has been stirred up. Pollock should also show around the rocks, with lures taking most of them as usual.

Portland Harbour: I have seen lots of anglers fishing Portland Harbour with lures. Some nice catches of small Bass have been taken, but the bigger fish prefer to come in on the larger tides.

The area around Castletown has a lot of Mullet shoaling up in it.

Weymouth Bay: The piers will fish well for small species as usual, but the main target will be squid.

SUBSCRIBE
Can a tide be too big? Not Tuna but a great day out.