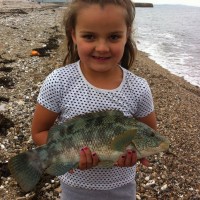 Apologies for late reports this week, but I have not been very well. Thankfully I am well on the way to recovery. I was wondering about how to start today s forecast, when I received an email from Simon Bridge from Bournemouth. He wanted to share a story about a recent trip to Chesil, which I enjoyed, I hope you enjoy it as well.

After an early morning session spinning for  Bass in Portland Harbour, which had resulted in a disappointing ‘blank,’ I decided to try for a few Mackerel  at the Ferrybridge end of Chesil. It was now mid morning and as I walked to the top of the shingle bank I was greeted with an amazing view of flat calm clear water, bright sunshine and had the beach all to myself. This was my first session of the year for Mackerel and I had to tame the urge to run down the bank like an excited child, as the sea looked so ‘fishy’!

As I got to the water line, a strong spring tide was whipping along. I then noticed the water was slightly cloudy  from the shore until about 30 meters out, then went clear again. This was slightly discouraging as I thought I would need to cast out way beyond the cloudy water, so the fish would see the lure in the clear water, but I was to be wrong. I set up my 11″, 15-60gm spinning rod with a small Dexter Wedge. As I did so I was joined by another angler with a beach caster and feathers. Annoyingly, he stood so close that our lines were bound to cross. Resisting the urge to say, ” Excuse me mate, you have 17 miles of beach here, do you want to hold hands and fish?” I just walked away until we were clear of each other. 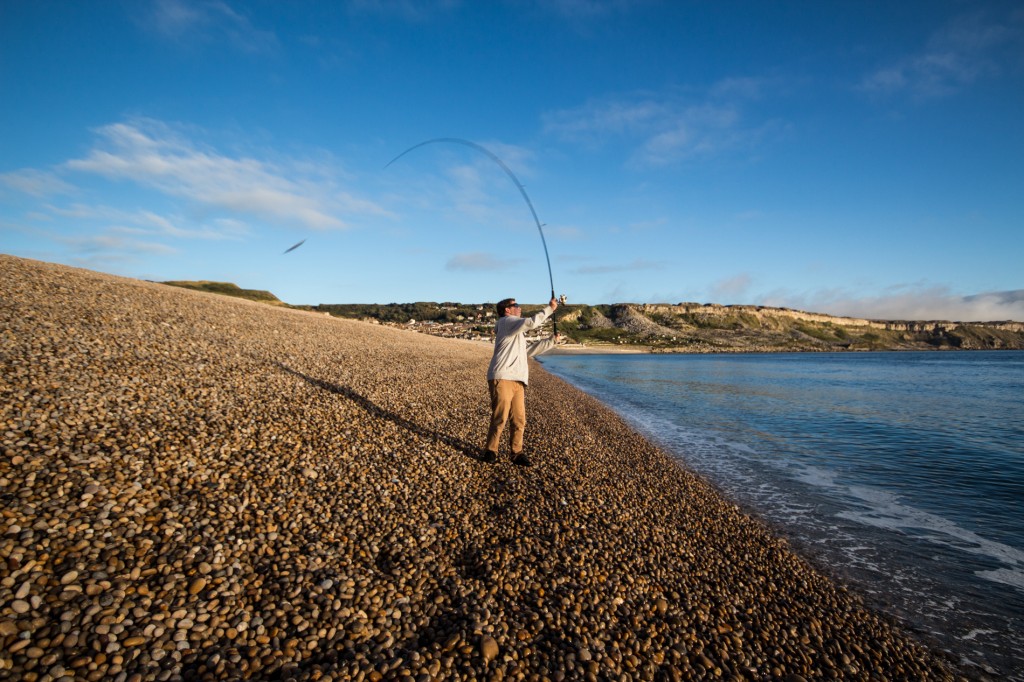 We both cast out at the same time and I could sense the anticipation, waiting to see who would catch first, lures versus feathers! I could see him smiling as he punched his 5oz lead and feathers way beyond my little Dexter, but I had confidence, I could see the occasional splosh of fish breaking surface only 15 meters in front of me. He was so intent on whacking out distance that he hadn’t noticed the fish almost at his feet. Then on my fifth cast, ‘Whack’ a fish took my lure only 10 meters out, putting a good bend in the rod and whizzing out line, the clutch giving on the small spinning reel. As it ran hard from left to right I started to think, “Is this a Bass?” as it fought so hard. After what seemed like ages I slid a good sized Mackerel onto the pebbles. A great fight, lovely conditioned large fish. I treated it with the respect it deserved and dispatched it quickly. A great table fish. I fished on and repeated the same on next cast only this time an even better fish! Then all went quiet and after a while I looked across and saw my neighbour hauling in a line of 6 or so Mackerel on the feathers. It hardly put a bend in his rod as they were pumped up the beach. They were varying sizes, small and large and went straight into a carrier bag. This was repeated then he started packing up and I went over to him. We had a short chat about lures versus feathers, he seemed like an amiable bloke, but  was set on continuing with feathers in future. After he left I moved to where he had been, again I could see Mackerel about 10 meters out in the cloudy water. I guess that’s where all the bait fish felt safer rather than in the clear water. I clipped on a silver and blue ABU Toby lure and worked it slowly through the shoal and picked up another 2 big Mackerel, which fought like crazy. It was time to stop with 4 in the bag, easily enough for a good BBQ. I left the beach having had some great fishing and with a big smile.

So never think fish won’t take lures in cloudy water, they do. The old saying ” Fish at your feet first” really can ring true. Never take more fish than you can eat fresh. Fishing for Mackerel on lures picks out the bigger fish and on a light spinning rod is a lot of fun! I won’t be using feathers again. 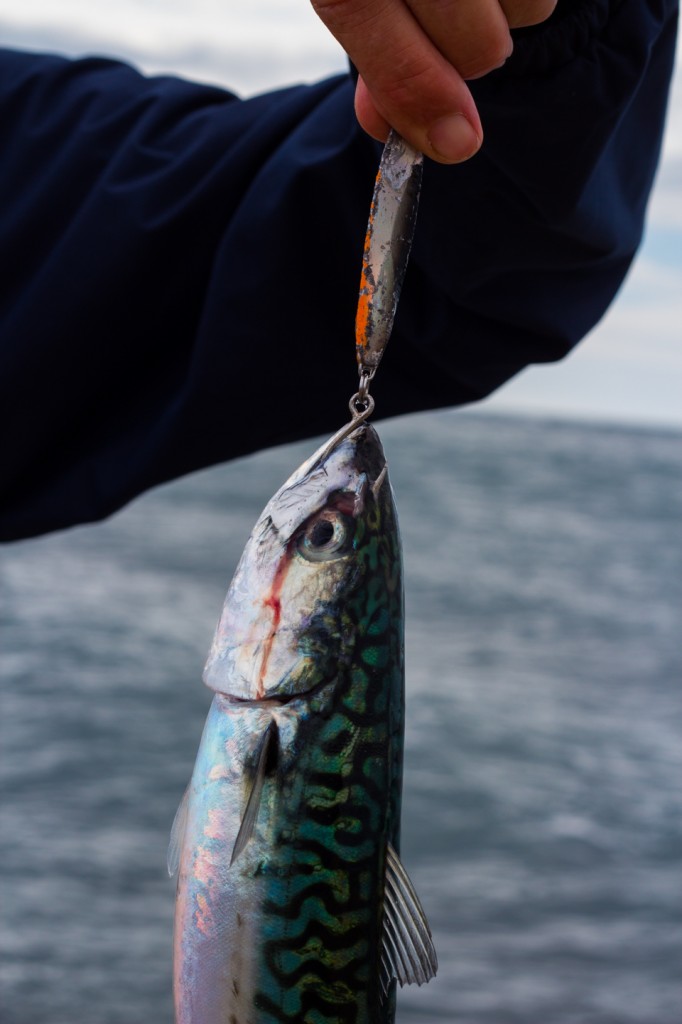 Apart from Simons tale of Mackerel we have had quite a few other species on the beach this week, and I expect that to continue over the weekend. Simon from Weymouth this time, sent me one of the first pictures of a red Gurnard that he managed from Chesil. We should start to see a lot more of these over the next few weeks. 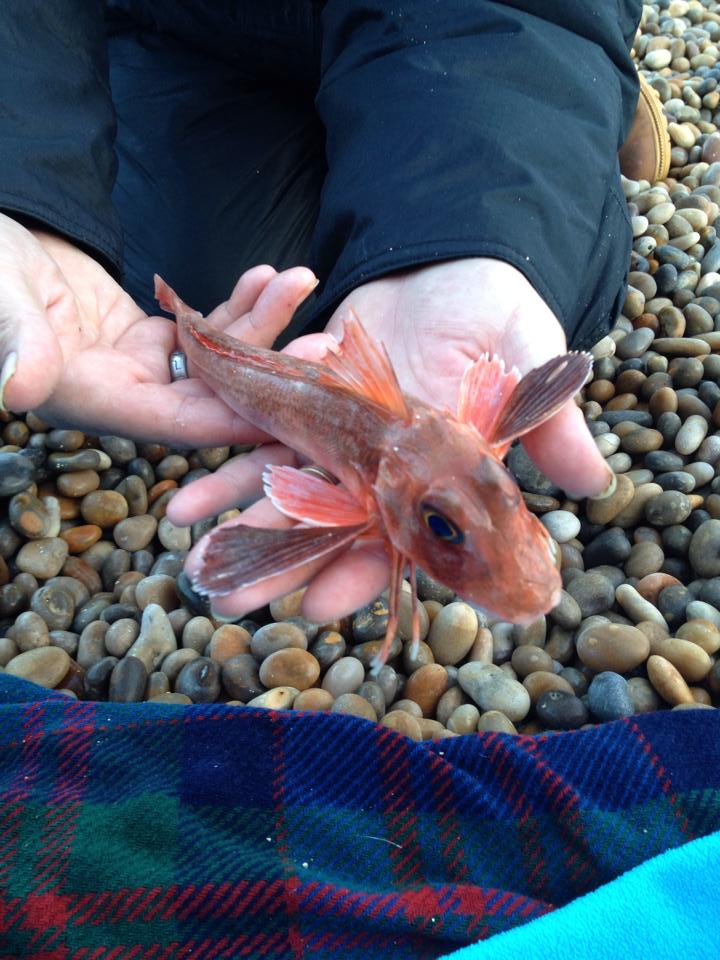 I hear a lot of anglers complaining that Chesil is not fishing very well. I think it is pretty much fishing as I would expect it to do this early in the season. Chesil is never an easy beach to fish, especially if you don’t know the exact marks, but with perseverance and putting the hours in you will start to build up a picture of where you can expect the fish to be at different times of the year. Remember that marks that attract Paice in the Spring won’t necessarily hold Cod in the Autumn.

Fish of the month has produced a lot of entries this month including a couple of fresh water entries with a nice Carp and Catfish. I will update the page over the weekend. You still have a few days left this month and I will take entries up to the 5th of June (fish only caught in May) for more details check out May fish of the Month

Chesil Beach: flat calm with good clarity in the water.

Chesil Beach forecast: As I mentioned earlier, Chesil is fishing reasonably well for this time of year. Plaice and Smoothound are being caught at Abbotsbury and West Bexington, but the Plaice do seem to be at distance. 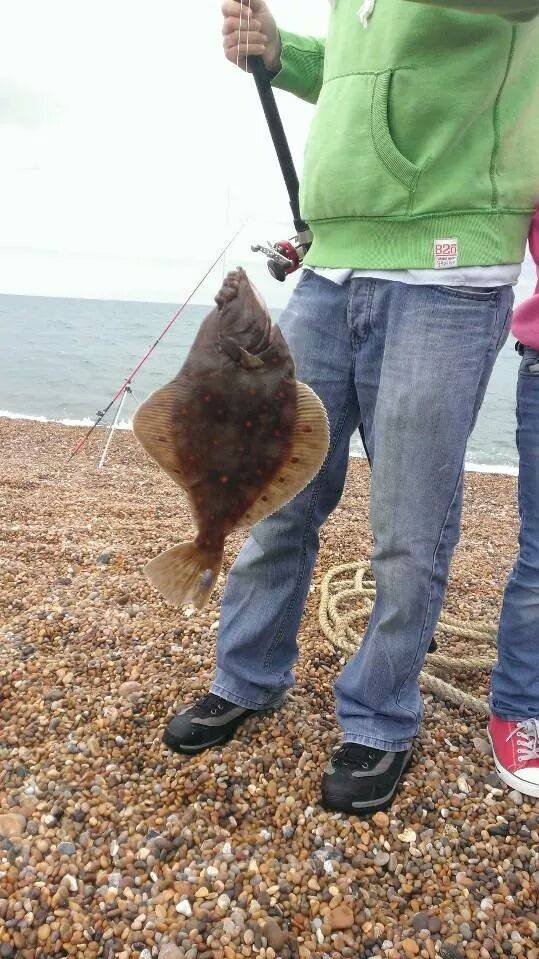 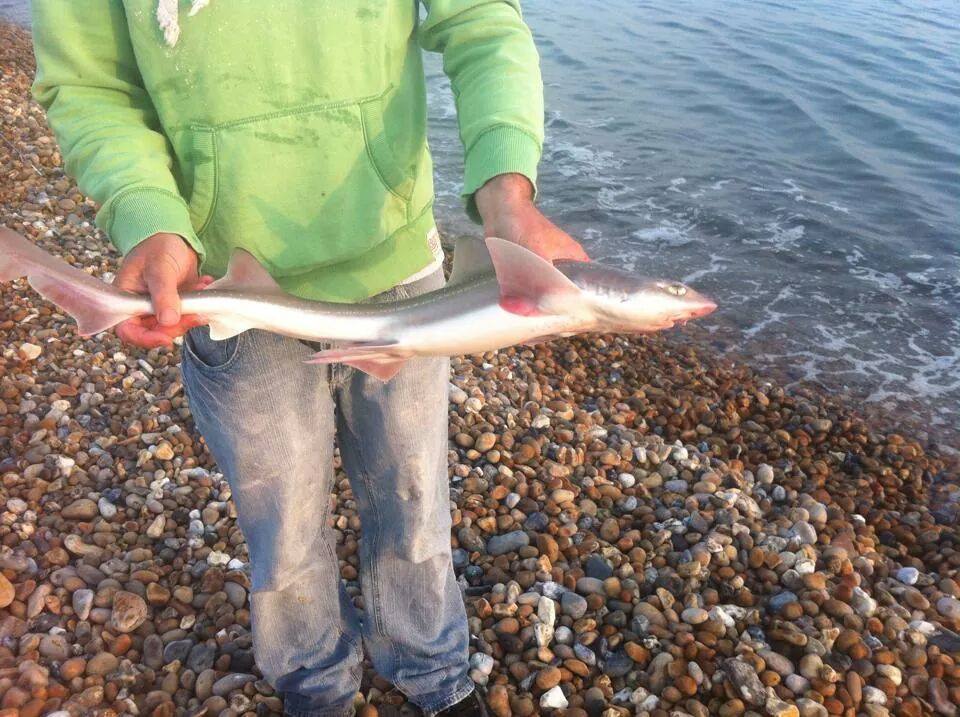 Expect plenty of Mackerel all along the beach. It is worth targeting Bream and Gurnard, especially towards Ferrybridge and Portland. Small hooks baited with small Ragworm tipped with a sliver of Squid work well for Bream.

Portland: Loads of Wrasse being caught and should continue to be caught in these conditions. Bait and soft plastic lures are doing well. The tides are great for Pollock around dusk. Try a White sidewinder lure.

Portland Harbour: Bass, Mullet and Flounder are all being caught from within the harbour. As always lures rule for Bass.

Lyme Regis: The great news is Darren from the Tackle Box in Lyme Regis has agreed to start doing regular articles and reports from that area. He opened with an early morning session with his daughter and Toby the fish monger. They managed some nice Smoothound between them, and a cracking Wrasse for 6 year old Willow. 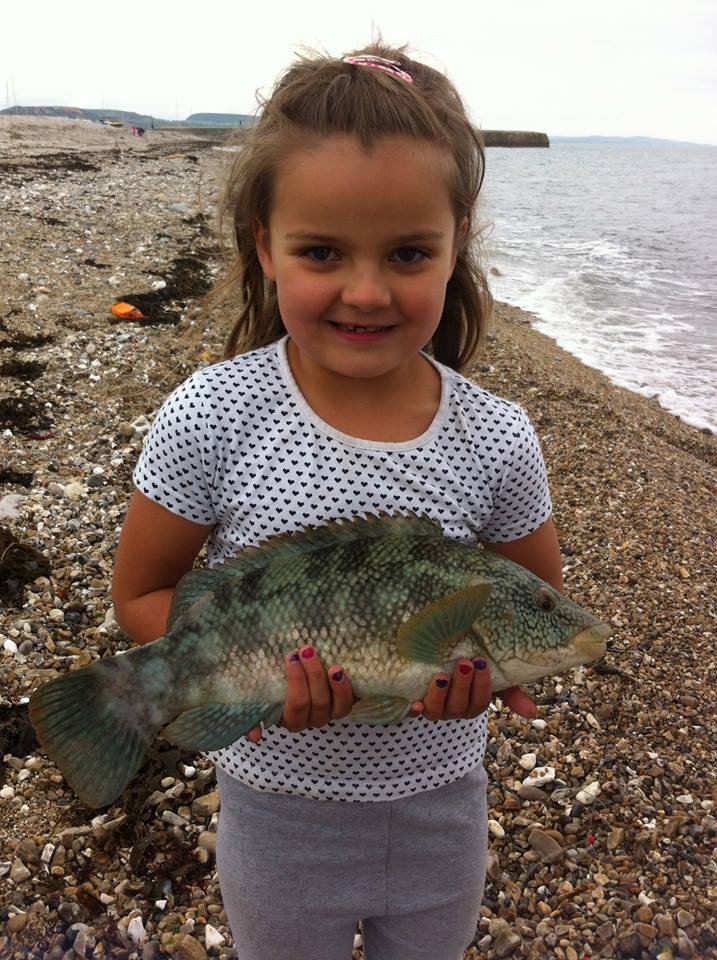 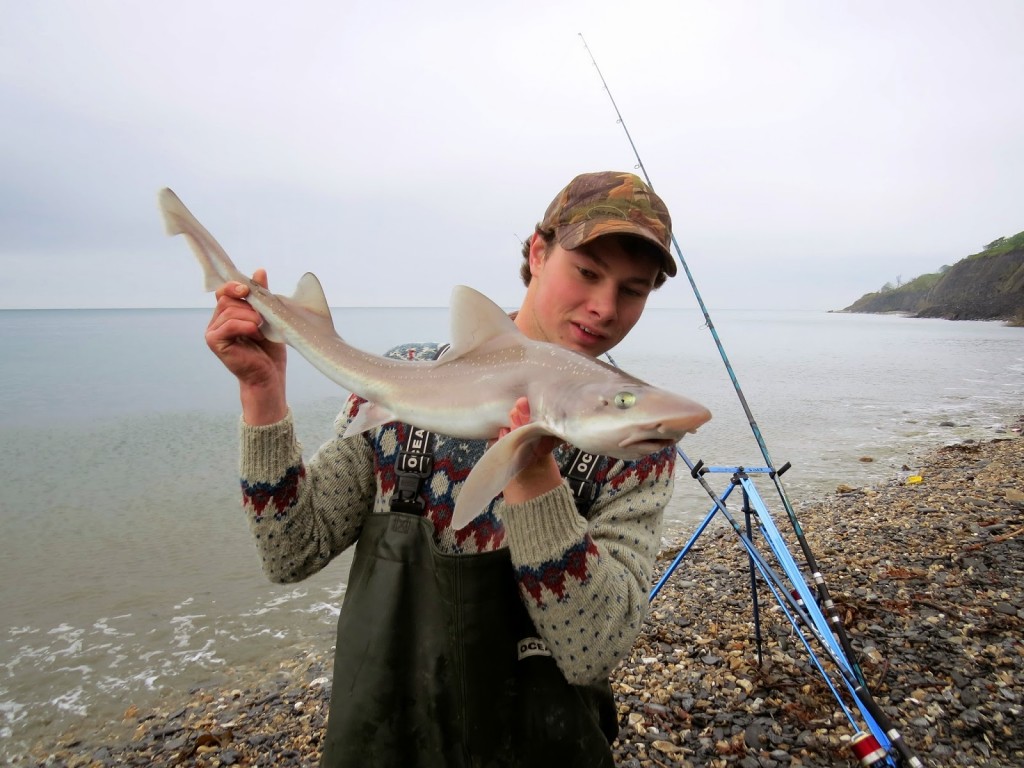 SUBSCRIBE
May fish of the Month 2014 Invasion of the crabs