Fishing Tails > All Articles > Reviews > Rods > Temple Reef Mytho Rod review
Plenty of species in the Poole area This could be the best fishing weekend of the summer! 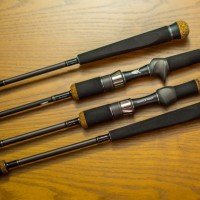 I first came across the Mytho jigging rod late last year, when I watched a video on Facebook by Dan Konig, who runs Adventure Angler. The video which I have included in this article shows him catching some lovely Cod on jigs up in the Shetland Isles.

I got in touch with Dan and he agreed to let me have the rod on loan for a review period. In fact he brought the rod from London, to me in person. I think the offer of jigging  for some Bass  out of Weymouth may have had something to do with that. It was rather unfortunate that after one successful drift, on which I managed a lovely Bass of 8lb, we had a problem with the boats engine and had to return to port. 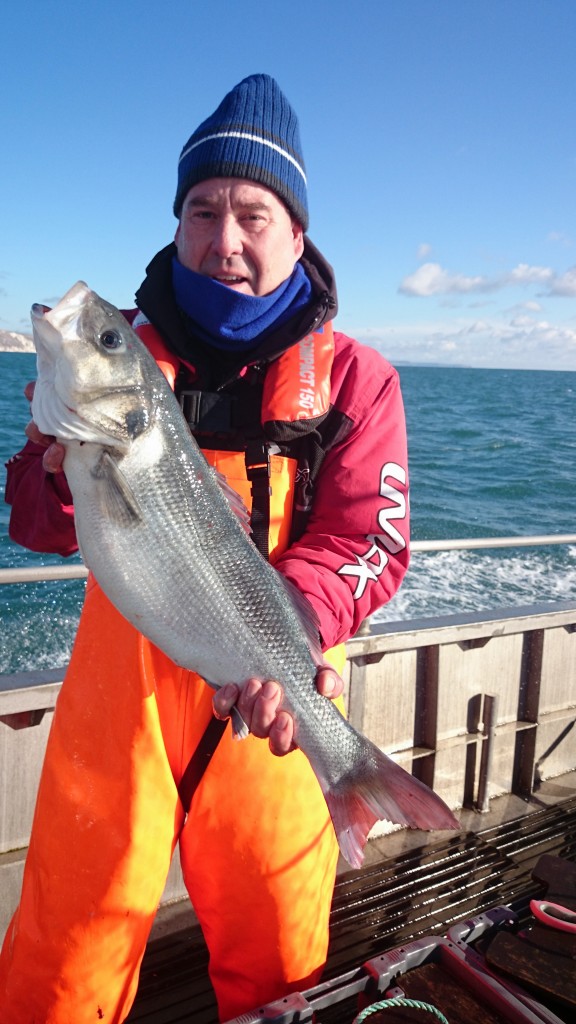 Jigging is a form of fishing that has been around for a long time, but which has undergone a complete evolution over recent years. This surge in popularity for the technique started in Asia, primarily Japan, and has been growing at an incredible rate throughout Australasia, the US and Europe for three simple reasons, it’s great fun, it’s addictive, and it catches fish!

The resurgence of jigging was focussed initially on more traditional ‘mechanical’ jigging techniques, where jigs which are generally long and narrow are worked with a very fast action to entice bites from fast moving, predatory fish. Techniques like this are absolute dynamite on fish like tuna, amberjacks, Samson fish and other fast moving pelagic species. For many years when people though of jigging, this is what they thought of. Heavy jigs, deep water, frenzied jigging pace and a lot of hard work.

But more recently, things have been slowing down. In some cases, right down. Recently there has been a new wave of jig development focussing on shorter, wider jigs, which flutter on the way down – meaning that they still have action when worked slowly. This has meant that a whole new range of species which were not fast or aggressive enough to hit a fast moving jig, can now be targeted.

Fish like cod, Pollock, ling, coalfish and halibut have recently been prime targets for jigging anglers. With the right tackle and the right techniques, many jigging anglers have been significantly out fishing those using more conventional techniques. The erratic action of these jigs can often cause fish to strike out of sheer annoyance, even when they are not feeding and one very well known south coast charter captain was recently quoted as saying that a large proportion of his larger cod were getting take on jig (which when you consider the low proportion of anglers using jigs, is no mean feat). 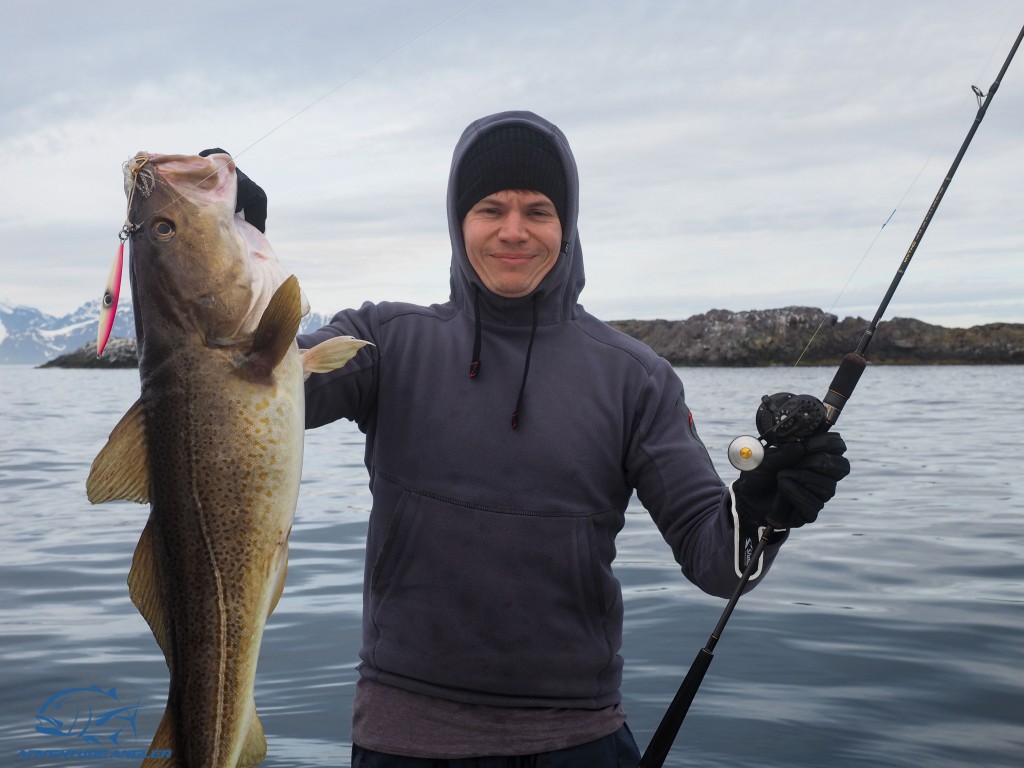 This new wave of jigs has brought with it a new range of rods and reels to go with it. One such rod is the Temple Reef “Mytho” series of rods, which I’ve been able to test recently and which has also been getting put to good use in destinations including the Shetland Islands and Norway as of late. The action of this rod is sufficiently fast to allow it to speed jig appropriately weighted jigs if you ever wanted to use it on fish like coalies or in warmer waters, but is also intended to handle slow jigging and so makes a great all-rounder for local cod, Pollock and the like.

When I first got hold of the Mytho, I was amazed at how thin it was. I have been trying out theLJ510B model with a line rating of  PE 1.2 – 3, and a weight range between 80 and 180gr.I am used to lightweight rods, especially lure rods, but to hold a rod that was as thin and light as any of my lure rods and then expect it to be able to pull up large fish on a boat, was surely asking too much.

The Mytho is a stunning looking rod, made of 36T & 40T high modulus carbon finished in black and silver, withFuji E-KWSG guides and aFuji Skeleton Reel seat with Ion Coated Hood, that gives it a very distinct and modern look.

The Eva grips give excellent grip and comfort, whilst the cork finish makes the rod look stunning. 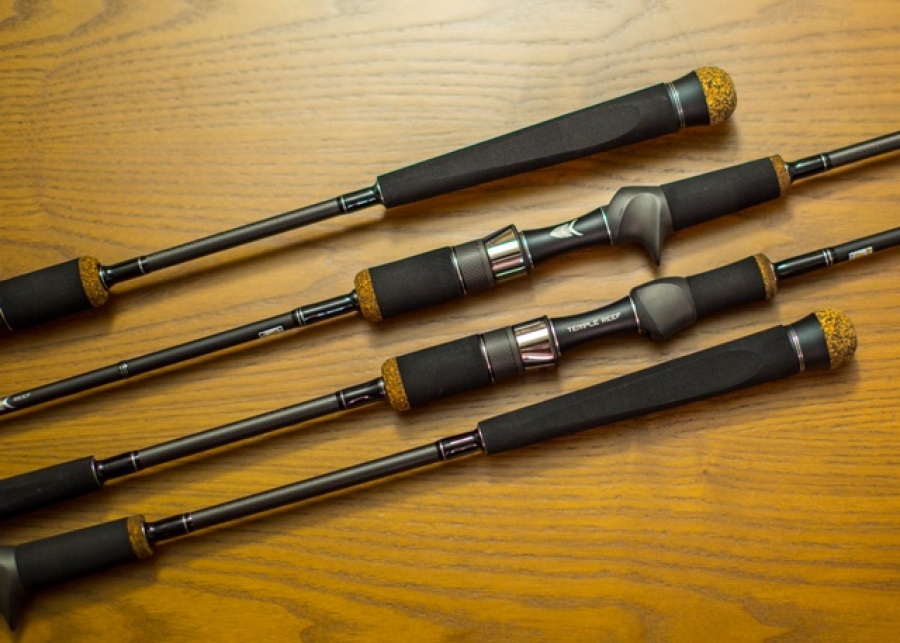 It is all very well talking about high modulus carbons and fancy guides, but what does that really mean to people like you and I that don’t have a degree in engineering. Basically Temple Reef have taken some of the most advanced materials and components and put them together to make a lightweight rod, that is extremely strong, yet responsive. 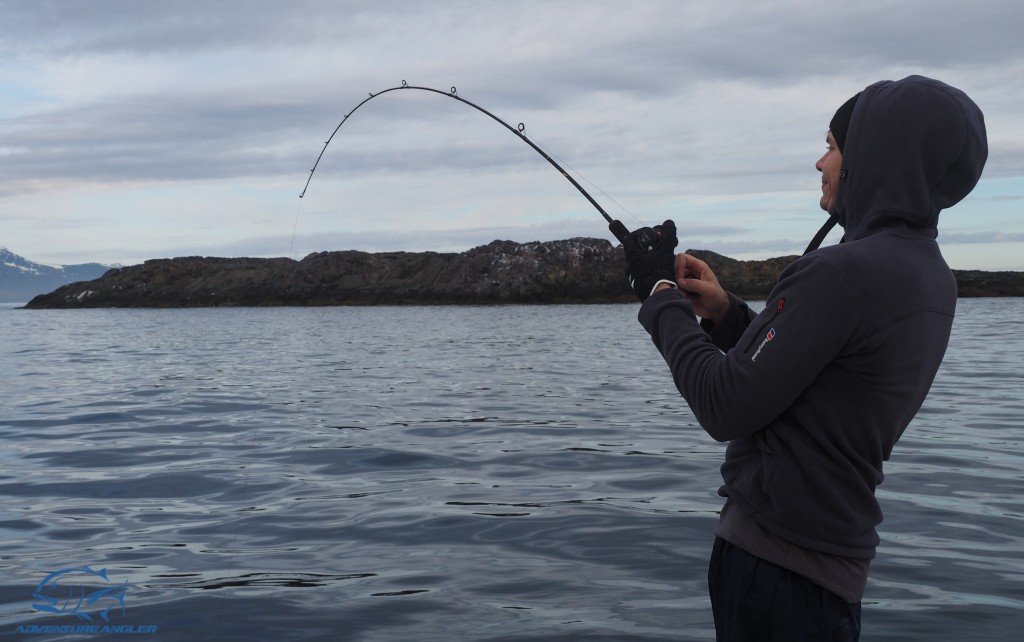 I matched the rod with an equally small reel in the form of a Wiki Jigging 900h. It felt so light and well balanced that I couldn’t wait to try it out. Which is exactly what I did on my next wreck fishing trip where we were targeting Cod.

A lot of the wreck fishing out of Weymouth is done in water in excess of 300ft. To get gown quickly enough you need to use a fairly heavy jig, so on the first run out with the Mytho, I was using 180gr jigs. I was really surprised that despite how thin the blank was, it was able to handle the 180gr. weight without it feeling overloaded. I was still able to impart a crisp jigging motion into the jig. It didn’t take long for me to realise this was a very effective method of fishing. Time after time, I hooked and landed a Cod, whilst others on the boat often had a blank drift. Once attached to a fish the inner strength of the rod took over. The rod would bend into a fish and absorb its runs and violent head shakes. I always thought that it still had plenty of power in reserve. 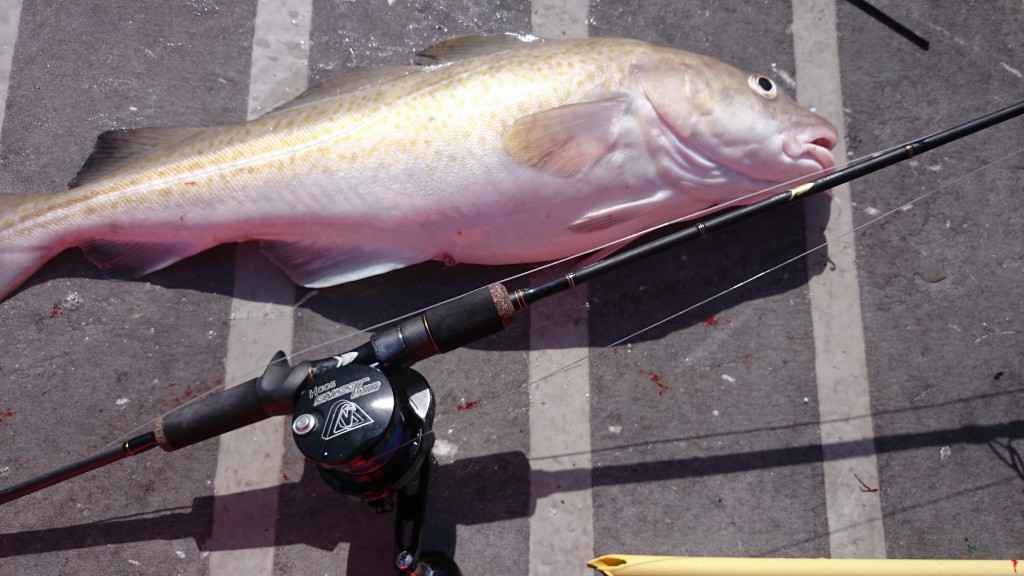 I have also used the rod for Bass fishing of Portland Bill. I did get a strange look or two from the skipper and other anglers when I told them I would be jigging at the front of the Portland Race and the ledges at St Albans. Traditionally I would use a Portland Rig with a Sidewinder or Eddystone Eel, fished on the drift just above the bottom. With the Mytho I was able to use a selection of different jigs and the Fiiish Black Minnow. I have seen video’s of how the French use the Black Minnow from the boat, and I thought that the Mytho would allow me to use the lure quite aggressively. That is exactly what I could do, as I let the lure hit the bottom then jigged it up a couple of metres with short jigs that were rapidly transmitted from the rod to the lure. The Bass found it irresistible.

The Mytho has certainly been put through its paces over the past few months. Dan took the rod out to Oman, where he used it to great effect on numerous tropical species. He also used it extensively in a recent trip to Norway. Landing some big Cod, huge Coalfish and even Halibut on it. 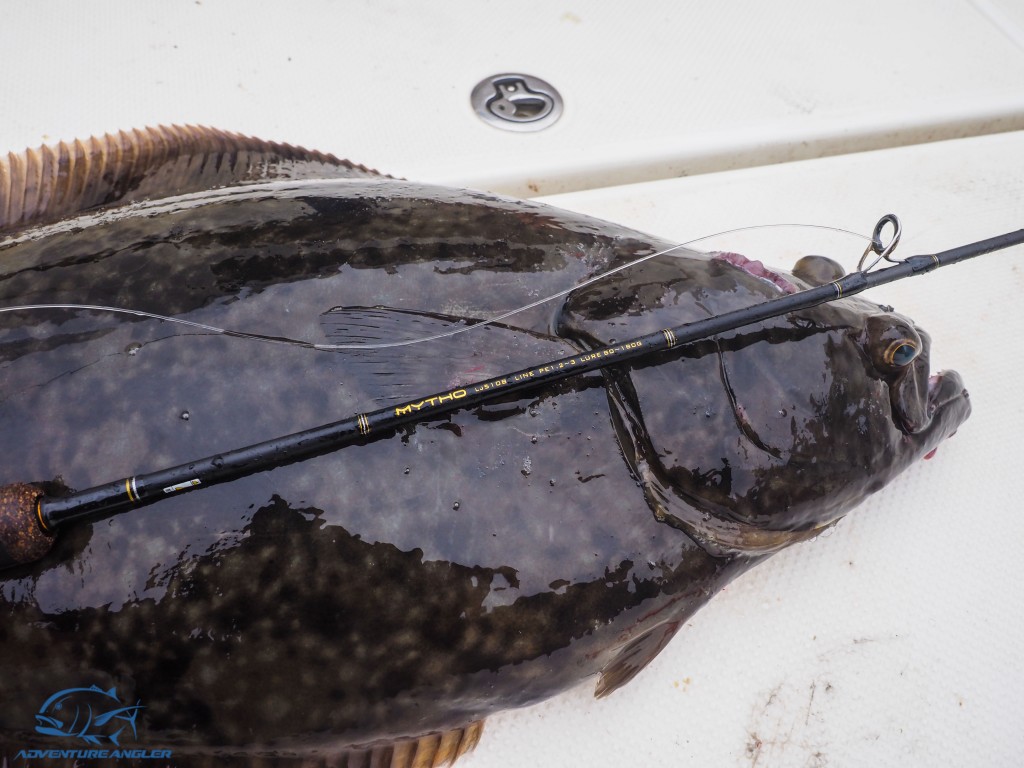 Fantastic action and strength from an incredibly light and thin rod.

The rod is not cheap, but you certainly get what you pay for.

The Mytho is a rod that is likely to change the way you fish. I have never used a rod that is so light, yet has so much strength. It is a pleasure to fish with it.

SUBSCRIBE
Plenty of species in the Poole area This could be the best fishing weekend of the summer!