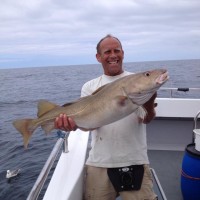 What’s it to be? Bream fishing, Gurnard, Mackerel and Bass. Just a few of the species  you could catch this weekend, and with the great weather we are having, I guess it doesn’t matter as long as you are going fishing. I am going to head West in the search of some Rays, most likely at Seaton.

Boat fishing all around the country has been excellent this week and I can see it continuing throughout the weekend. I always find that the smaller tides are better for boat fishing. Both inshore Bassing and offshore Wrecking have produced some great fish. 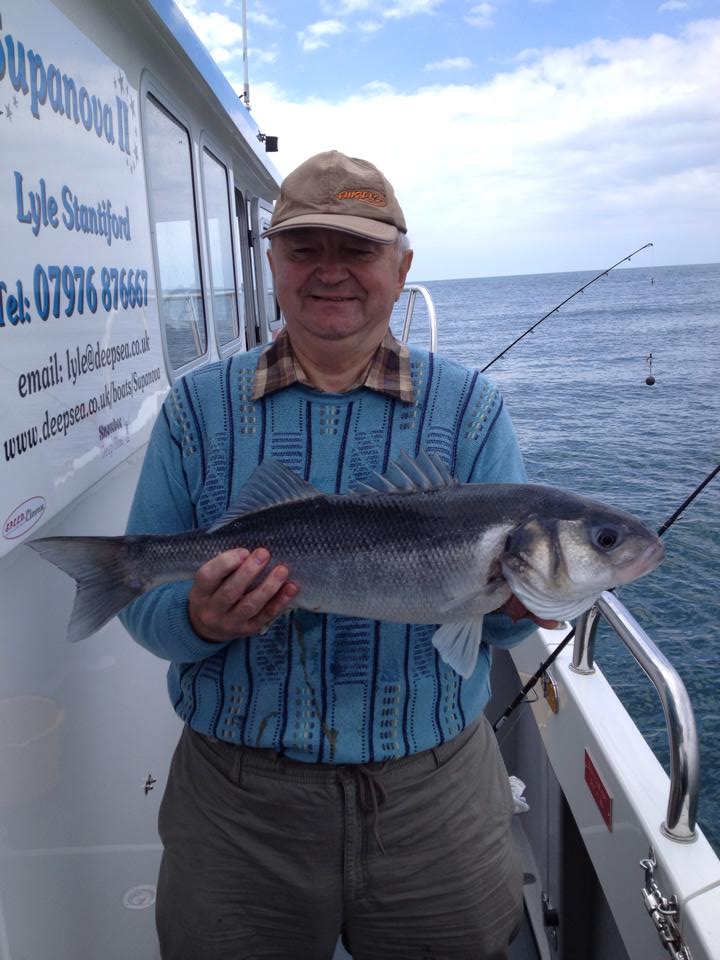 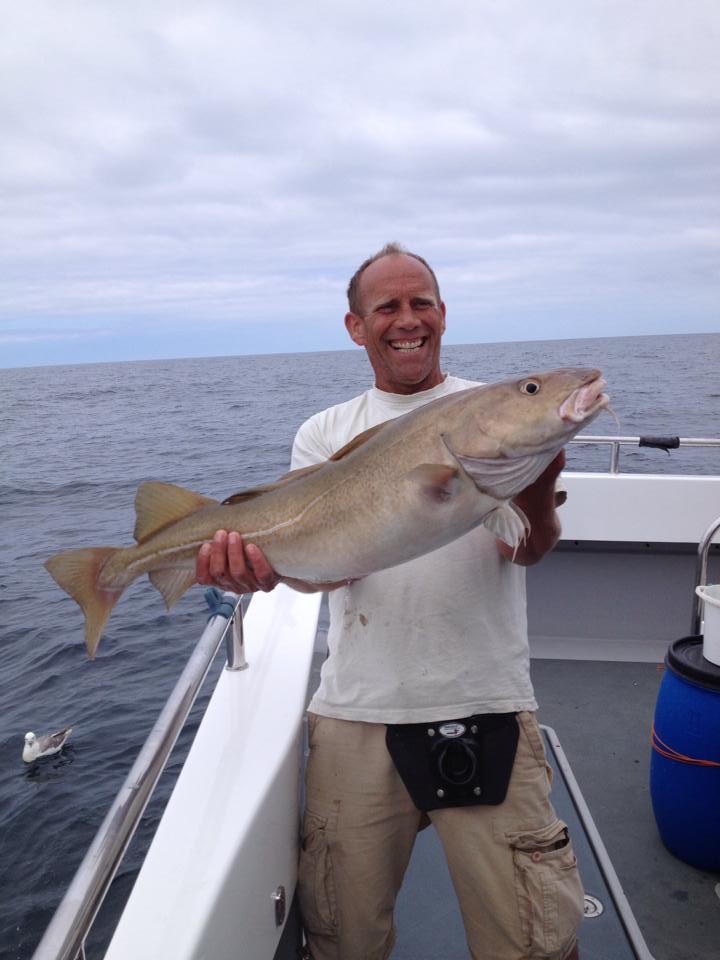 I have been on a bit of a spending spree this week. You may recall last week I bought a Fin-nor fixed spool rod and reel for boat fishing. Well to be honest, I have to say that for the type of fishing I bought it for, it was not suitable. That is the problem when you buy tackle that you can’t find a review on. I will be reviewing it in the next 6 weeks or so once I have fully tested it. Don’t get  me wrong, it is a great rod and reel combo, but just not for what I thought it would be good for.  I have bought another rod to replace my Abu Suveragn 20-30lb rod, which has been my favourite for years. After quite a bit of research I have decided to go for the Shimano Beastmaster AX BT Slim. It looks and feels like a great rod, so thats another one I have to do a review on.

Chesil Beach forecast: I think it will be a great weekend on the beach with Bream, Mackerel and Gurnard all now showing regularly. I had a report from a diver that he has seen a few Red Mullet. Bream fishing always seems better towards the Ferrybridge and Portland end of the beach. This is due to there being more features for the Bream to shoal around. If you are after flat fish then head towards Abbotsbury, West Bexington and Cogden. Rays, Plaice and Sole have been caught there recently.

Portland Harbour: Looking at the amount of bait fish in the harbour at the moment, I would say that the Bass would be around hunting it down. Lure fishing all along the shore in the harbour is your best chance to get a nice Bass. Plenty of Flounder showing as well. I noticed several large shoals of Mullet in the Fleet and around Ferrybridge.

Preston Beach will produce some flat fish, but due to the calm conditions I would not expect many Bass, other than small ones.

Lyme Regis: The following report from Lyme is an extract from Darren Herbert’s (Tackle Box) Blog:

For a lot of anglers, fishing a neap tide is not the ideal time. Many beaches fish much better when the tide is really running, pushing food along in the currents to the fish, but on some beaches like Monmouth beach in Lyme Regis, a neap tide can still fish really well.
Because of the lack of strong currents Crabs, Prawns, and small fish can venture out of their hiding places in search of their own food. Fish such as Smoothounds, Bull Huss, Wrasse, and Bass will take advantage of these wandering creatures, moving in around the ledges and rocks searching them out.
A neap tide also gives you much more time to fish this beach than a big spring tide, as there is always water over the ledges. A bit of colour in the water also helps when bait fishing, as it gives the fish more confidence to move into the shallower areas of the beach during daylight hours. 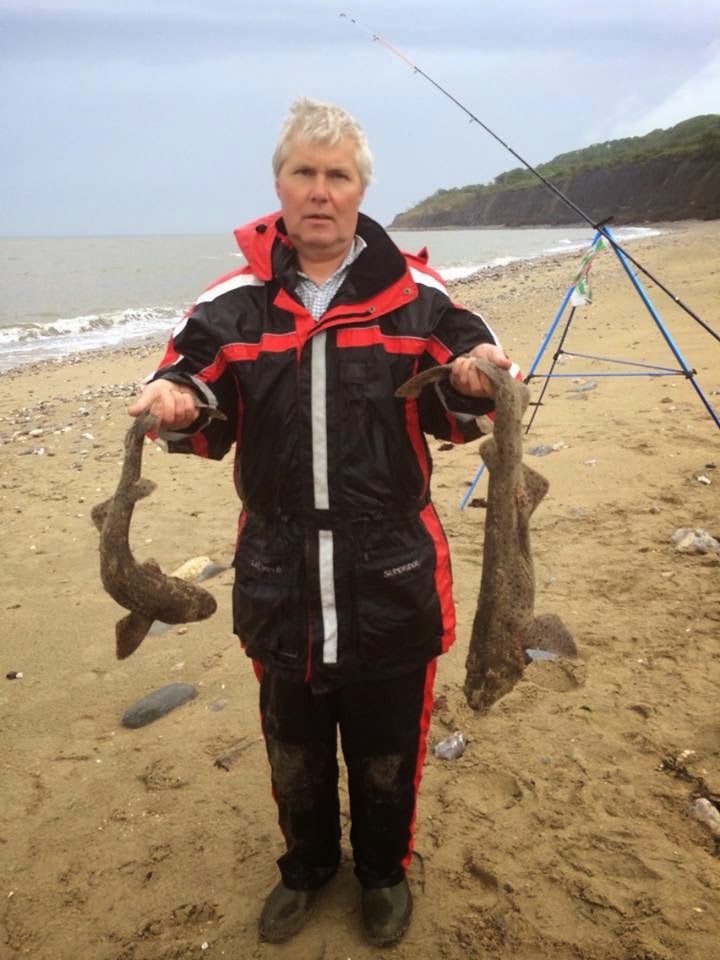 he start of June normally sees the bigger Bull Huss starting to move inshore along Monmouth beach and Pinhay bay (sometimes in Pinhay bay there can be so many Bull Huss, nothing else gets a chance to get to the bait). Pictured here is Mark Cleaver with a couple of Bull Huss caught  during a neap tide at low water. If you want to have some fun and put a bend in the rod fish a big bait (whole Calamari Squid works great, has plenty of scent, and is cheap) on a Pulley rig with a rotten bottom between 20 yards and 60 yards out. In the last few years I have opted for single hook rigs opposed to pennel  rigs, as Bull Huss, Bass, and Smoothounds all have the tendency to wolf down the bait, making them hard to unhook if there is more than one hook. If you are worried that without a second hook a big squid bait will ball up even with bait elastic, try using a couple of half hitches in the hook snood over the tail end of the squid.