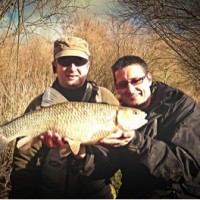 Fresh fish of the week

You may have noticed an increase in freshwater reports over the last few months as we continue to look at how it can be a viable and cheap way to pass the long winter months when sea fishing can be tough!

As part of this crossover initiative  our own pike fishing expert Nathan Edgell invited myself and Sean along to one of his favorite rivers to have a go at catching 20lb + pike on lures! Needless to say diaries were cleared and a date was quickly made, after all what self respecting fisherman who had read Nathan’s recent articles, would not jump at the chance of pitting themselves against a monster river pike 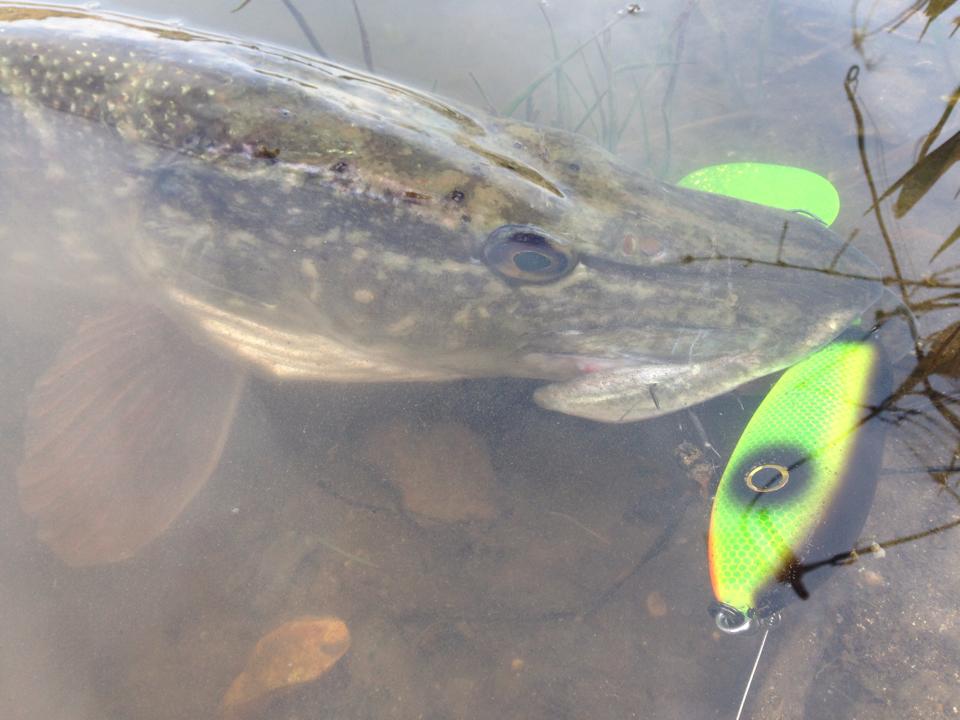 So how do you prepare to go after a big croc? Well for me it’s simple, I used all my standard bassing gear with the addition of the strongest wire traces I could find in my local tackle shop. Packed all my biggest hard and soft lures and headed off into the night to our rendezvous in Dorset. Sean arrived soon after me with some new bits of kit loaned to us from Fladen UK to put to the test and a classic case of man flu! 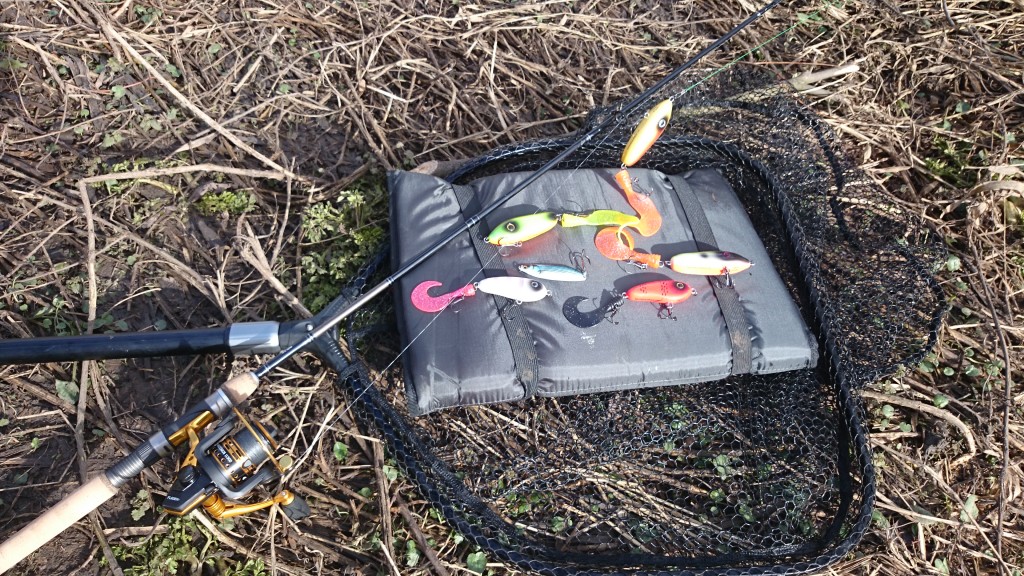 The new pike lures looked huge compared to even the biggest of my bassing ones and when Nathan arrived soon afterwards and produced his quite ludicrously huge soft plastics I was beginning to feel a little bit outgunned! This coupled with the fact that I’m fishing with my lightweight bassing gear with 2 guides at the top of their game, for a fish twice the size of anything I’ve ever caught is getting me more than a little nervous.

Nathan heads off his eyes shining with excitement, here is a man who loves his fishing, dropping little nuggets of information as we head towards the river. Conditions are perfect, little wind, no rain and good water clarity despite the forecast of 40 kn winds!

Sean does not look at all well. 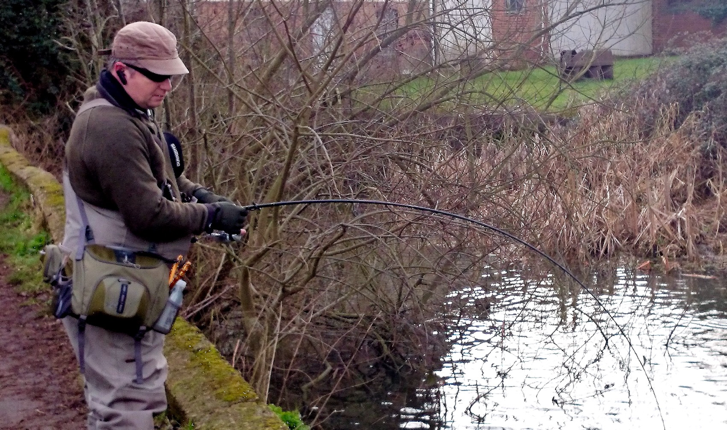 We have not gone more than a few paces before Nathan flicks his lure into a rather uninviting mill race running alongside the path, in a flash a pike grabs his lure and is off again into the murky depths. I have a go and second cast another flash and I have a small pike well hooked. An off colour Sean catches a branch in the water. 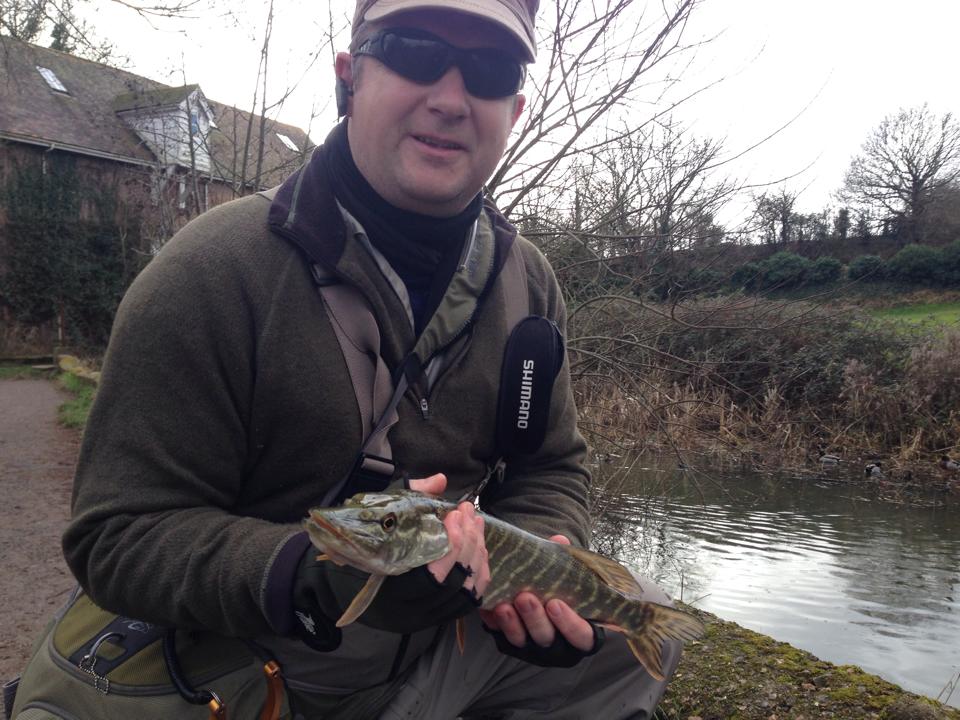 We head off at breakneck speed stopping at some fishing spots, passing by seemingly identical marks without so much as a casual glance all the while Nathan intersperses the banter with little bits of water craft, pointing out features where pike like to lurk. Some of it I know from fishing for Bass in estuaries but most of its new to me, gradually I begin to see why some marks are passed by and others fished extensively. Sean looks as if his man flu is developing into the plague 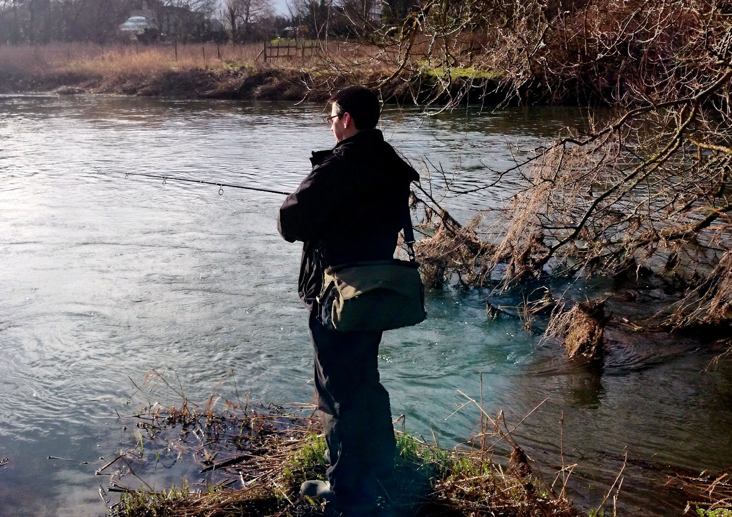 We stop at an inviting mark and even I can see we will be here for a bit, lots of the features  Nathan has talked about over the course of the day are present. I fish hard but it’s been a long day and I’m tiring so I switch to a much lighter lure which caught me my PB pike last month. I like it because it gets down deep quickly and even on a slow retrieve the action is very aggressive, so it’s easy to get into the zone quickly and hold it there as long as possible.

I fan my casts over the river covering as much water as possible until a big thump and fish on. Nathan is quickly by my side “don’t let it break the surface it will shake and throw the hook”, but this fish is pulling strongly, it stays deep I can feel its tail thumping just like a big bass!  I get it close twice but each time it turns and takes line. Nathan says “it’s not a pike” my heart sinks no big croc for me today. Sean shouts “it’s a chub” as it slips into the net. Both guides seem very excited I’m still disappointed not to have landed a 20+ pike.

Both men go into overdrive unhooking and weighing it in quick order. The brand new scales from Fladen say 8lbs 8oz  apparently this is really big, a very special fish! I’m still behind the curve until Sean speaks my language you’ve just caught a 12lb bass equivalent he tells me. Now it get it! (He has since upped this to a 16lb bass) 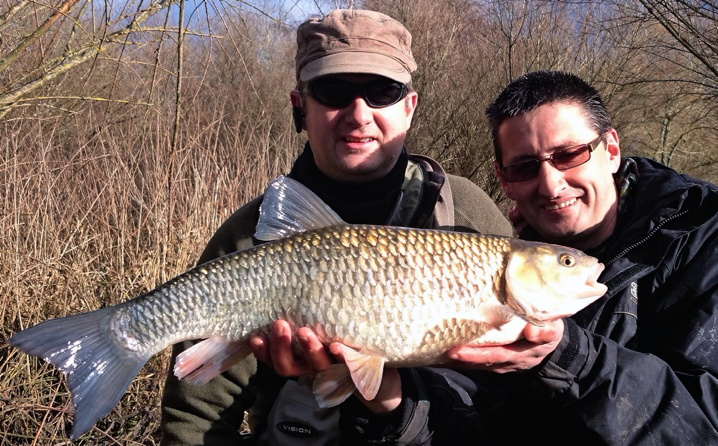 After all this excitement both guides got down to some serious fishing, Nathan breaks out his secret weapon a 35g Abu Garcia Atom and a near death Sean just breaks down. 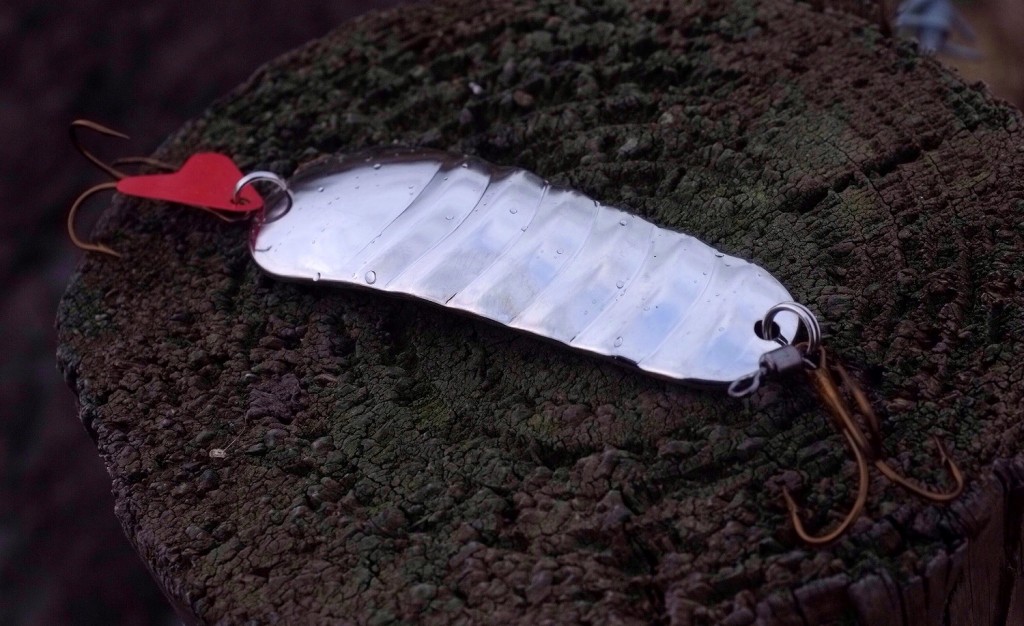 Soon the natural order of things is restored as the water erupts at Nathan’s feet a large pike has just missed the Atom as he lifted it out, quickly he flicks it 5 yards out and brings it back in again the pike lunges and the pike is hooked but only once Nathan has the presence of mind to draw the lure in a figure of 8 at his feet to help it out! 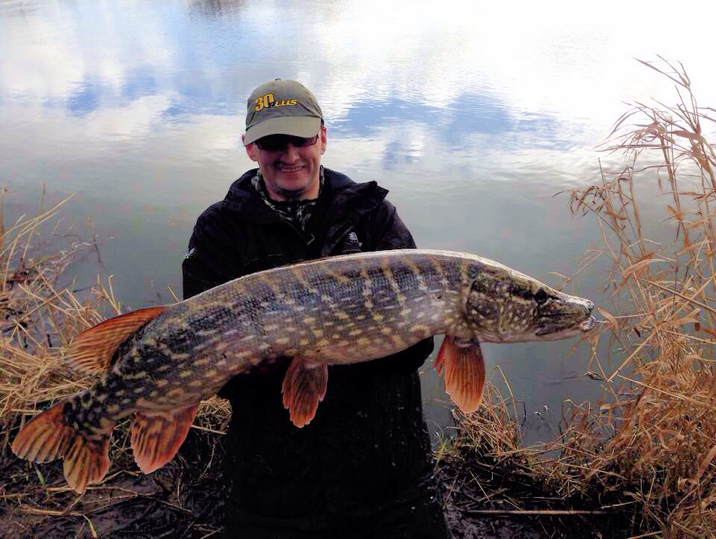 We photograph it and Nathan gives us a masterclass on safely returning the magnificent but surprisingly fragile beast.

That’s it the end of a great day.

Except for one little detail, Nathan posted the Chub  on his Facebook page and the story has been picked up by  Anglers Mail and in today’s publication (10/2/2015) it’s won their FISH OF THE WEEK! 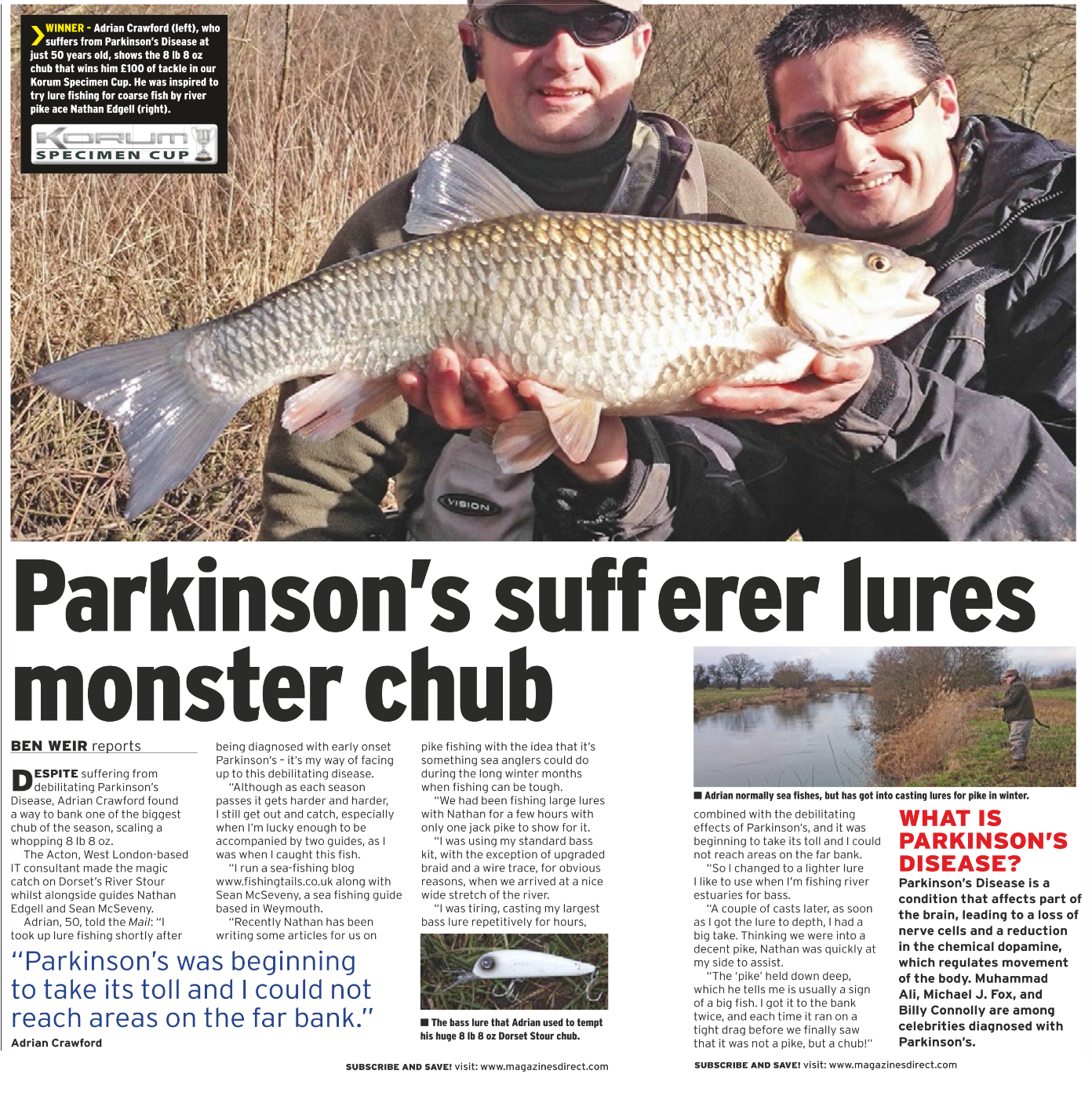 Our own Adrian Crawford wins Anglers Mail Fish of the Week

4 Responses to "Fresh fish of the week"