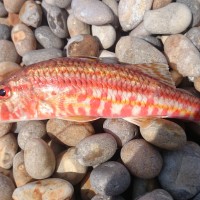 I love to see unusual and exotic species turning up around the shores of the UK. This week I had a message from Stuart McNab, who runs the charter boat Dev Ocean out of Milford Haven. He sent me a picture of a 12 1/2lb Stone Bass that was caught on his boat. Stone Bass are also known as Atlantic Wreckfish, normally live in deep water caves and wrecks. They can grow in excess of 200lb, but on occasions such as this, Juvenile fish will often travel under rafts of weed or wreckage, that drift on the ocean currents. Stuart told me that they spotted the Stone Bass whilst fishing for Sharks. It initially went after the shark bait, but they managed to tempt it on a much lighter rod baited with Prawn. I call that good fishing. 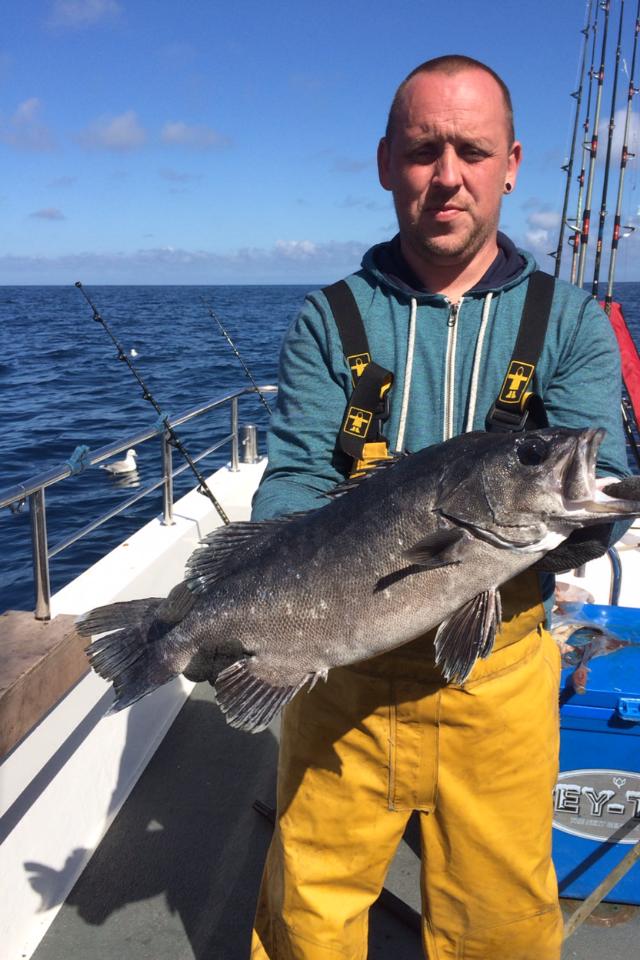 Talking of exotic species, I have been out a couple of times this week in search of Trigger Fish. So far I have had nothing, and I have not heard of any being caught either. I spoke to a couple of divers that had been diving the Landing Craft. They reported that not only were there no Trigger Fish, but there were no bream on the wreck either. Reports from the Royal Adelaide were the same. Lets hope that the next set of spring tides bring more fish back to the shore again.

Whilst guiding this week, one of my guests managed one of my favourite fish, a Red Mullet. There have been reports of a lot of Red Mullet along Chesil at the moment. They like to feed on the bottom, and will happily take worm, Squid or Mackerel baits. 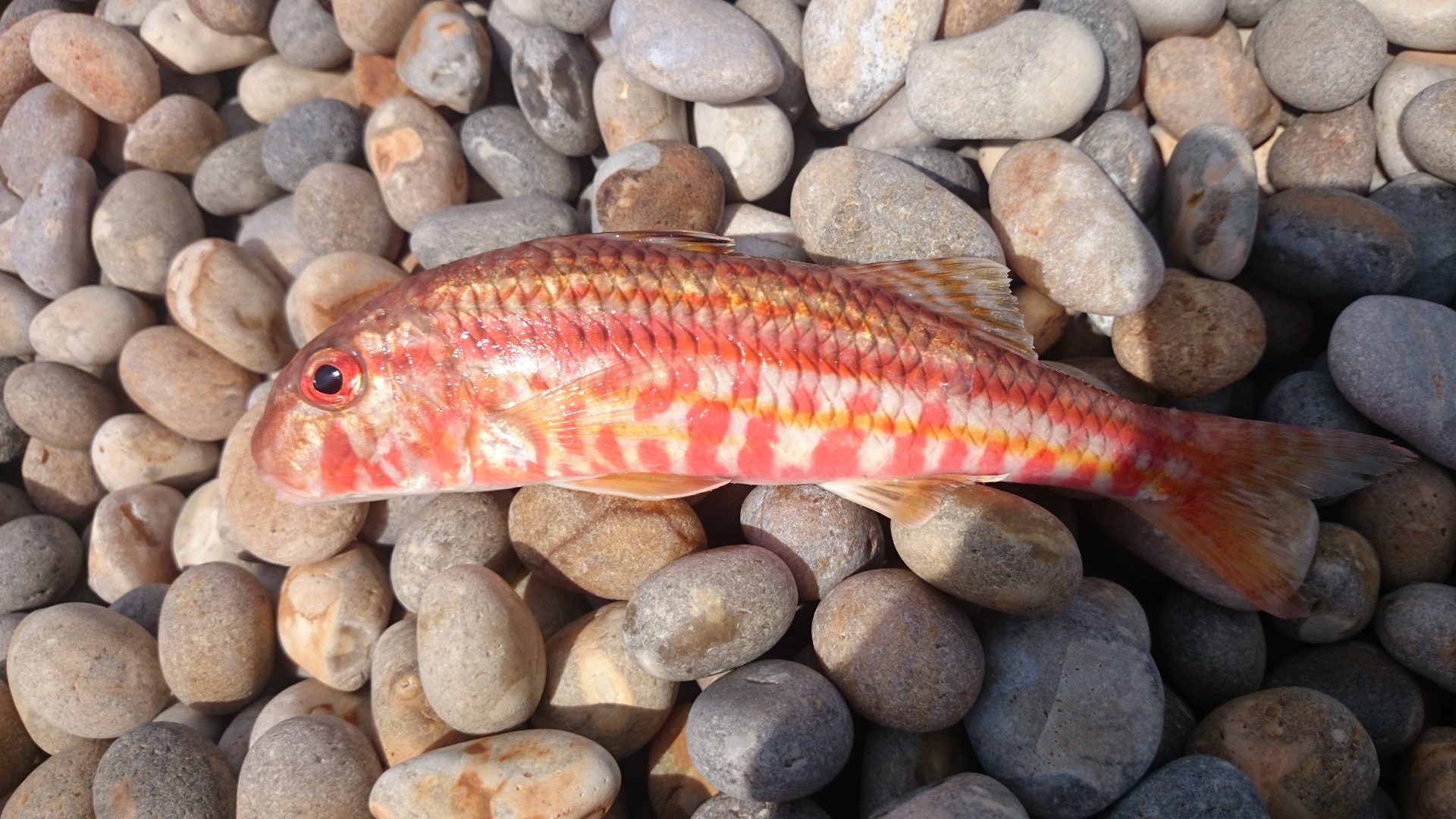 Chesil Beach forecast: I will be honest and say that it is tough going on the beach at the moment. There are Mackerel about, but they seem to be staying out of casting range for many. I have spent a lot of time on the beach this week, and watched people feather for hours in search of Mackerel. Eventually it paid off for most of them, as a few shoals did come within range.

The Bream seem to have disappeared from the normal shore marks, although there are lots to be had from the boats, so I am confident they will return to the shore. Even the Gurnard that were so plentiful a few weeks ago, are much scarcer now.

Plaice do seem to be around in good numbers, most are being caught towards Abbotsbury. Night tides will produce Dogfish and Pout all along the beach.

Portland: I have had a number of sessions on Portland this week. The Pollock are still not around in numbers, but the Wrasse fishing has been really good. I have had a number of successful lure guides this week, where Wrasse have been our target. They all fell to Rapture Rib Slim Shady shad’s in 3 inch size. Black and Silver combo seemed to be the best colour. 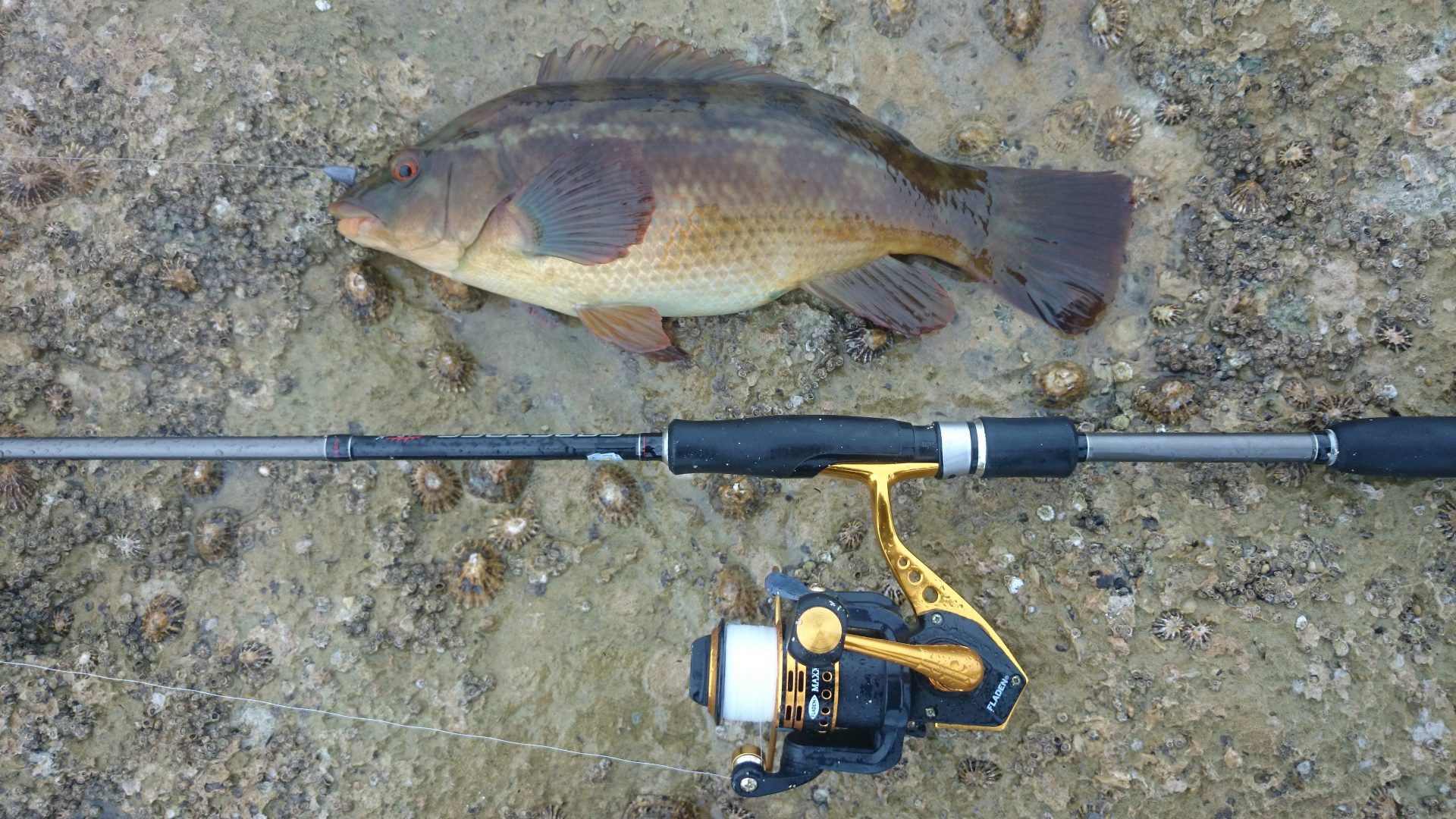 Portland Harbour: This is where I have spent the rest of my time this week. I have been out every day despite the wet miserable weather, and it has been worth it. Conditions looked ideal for Bass in the harbour and they were. All the Bass fell to surface lures. Each different condition called for a different type of surface lure, and when put in front of the Bass, they were happy to take them. There are very few things more exciting that seeing a Bass smash into a lure on the surface, especially if they miss it and they come back several times. Each time throwing a great splash of water into the air, before finally becoming hooked, then shooting off taking line from the drag. unfortunately due to the amount of rain, I was unable to take any pictures, as my phone would not operate with so much water on the screen.

The other unfortunate is that the tides this weekend are poor for fishing the harbour. Bigger tides are far better, but don’t let that put you off too much. The fish are there to be caught.

Weymouth Bay: Garfish and Mackerel have been caught in good numbers from the piers and should continue to be caught. As dusk approaches large shoals of Scad move in. They are easy to catch on float fishing tactics, using Mackerel strip as bait.

SUBSCRIBE
Carp fishing in France Fishing at its best