Fishing Tails > All Articles > Reports > Fishing Abroad > Lure fishing for GT’s and other monsters in Oman.
How to rebuild your rod on a budget. Fishing in March, what to expect. 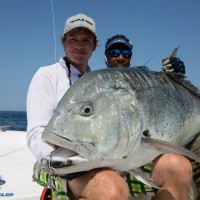 Lure fishing for GT’s and other monsters in Oman.

Late last year I was out in Southern Oman, fishing with the excellent No Boundaries operation. The aim of the game was to try out some new tackle, have some good laughs, and most importantly, catch some world class fish! I was fishing with some Australian mates Tim van Bockxmeer (who I’d previously fished with in Vanuatu) and Josh Racovelli who I knew from the tackle business in Perth, so I knew we’d be in for good times.

The reports I’d been seeing in the weeks leading up to the trip were positive, which had me primed for some solid fishing action. Plenty of great GTs had been taken along with some great inshore action, and to say I was raring to go was an understatement.

As with most people going to Oman my main target was to get some hooks into some monster class GTs. I’d told myself before I left that as long as I landed one of those Omani monsters for the trip, anything else was a bonus. 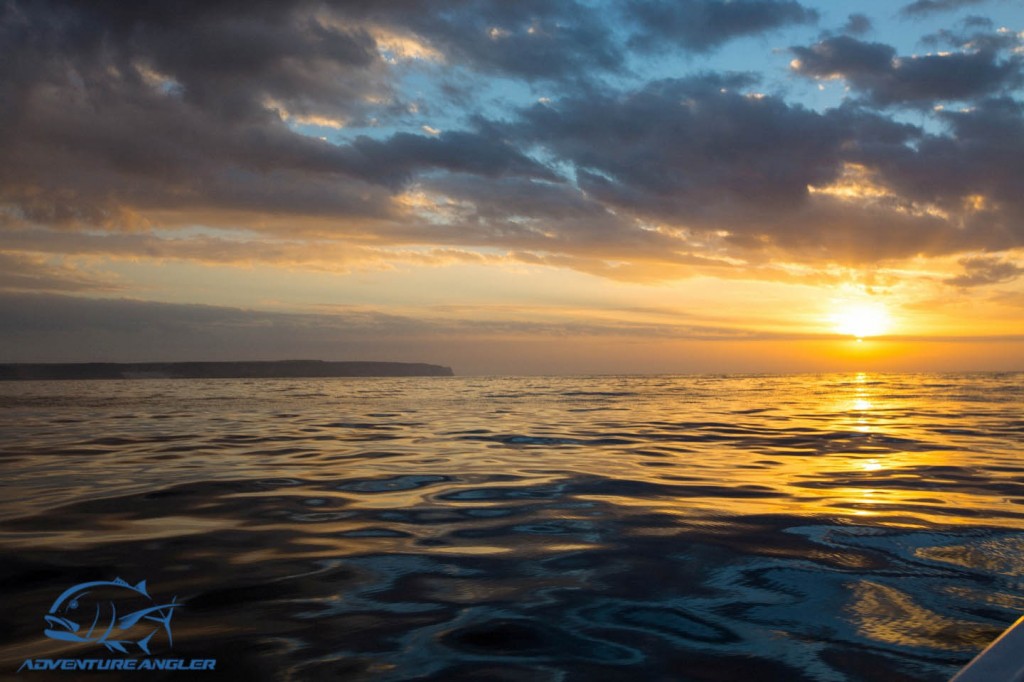 A couple of days prior to the trip the weather forecast started looking pretty average, due to a tropical cyclone passing through the area and we all got a little nervous.

With a decent forecast for the first day at least we had an early start and shot out to the islands to hassle some GTs. I’d just picked up some of the new (and very sexy) Temple Reef Ballista Detonator 168gr poppers to test out on the trip, and had one of these ready to fly on the first cast.

Sadly the fish did not want to play ball (primarily due to the wind direction we were told) and in almost a full day of casting we’d only seen one GT – which made a pass at my Ballista, but didn’t find the hooks.

To ensure we didn’t have a fishless day we spent the last couple of hours doing some light tackle fishing around the islands, where we picked up a handful of small trevally on casting gear. We then switched to some light jigging to find some dinner. This was loads of fun, and showed me why some people travel to Oman to do nothing other than light tackle fishing. There really isn’t any other place like it in the world. 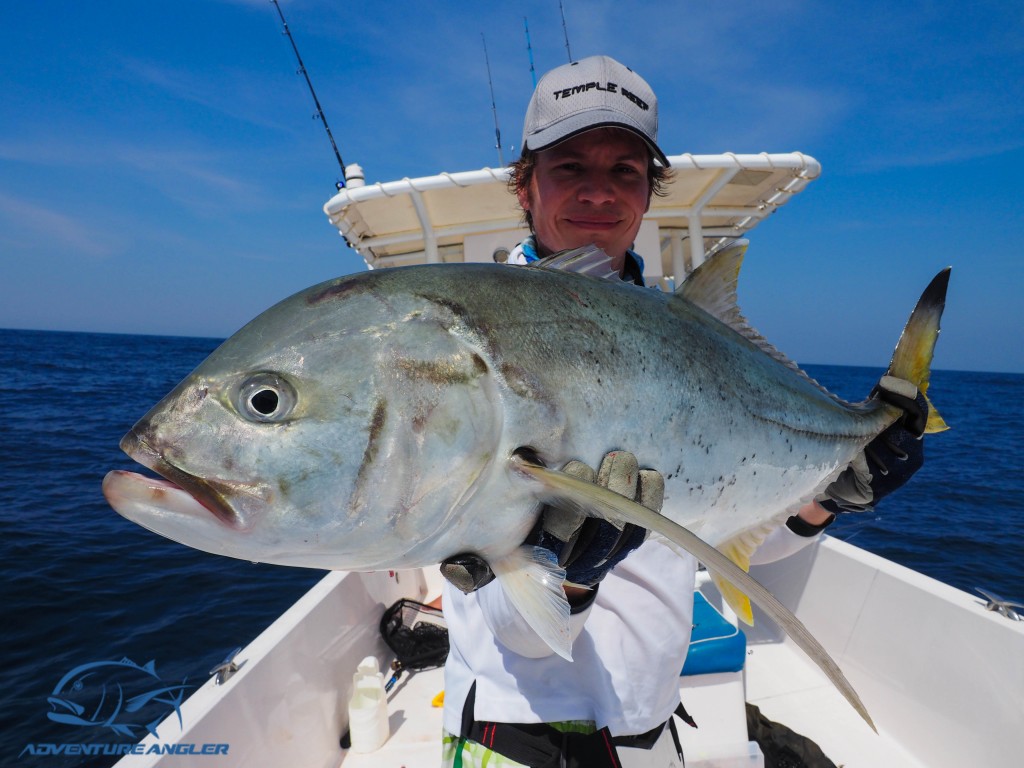 I was using quite a light combo for those waters, in the form of a Temple Reef Mytho LJ510B. This rod was awesome fun, landing me spangled emperor, a longtail tuna and a nice sized grouper all taken on a 175gr FCL Labo SLZ jig. The risk with using this light combo is you never know whether the next fish to grab your jig will be a 30kg+ Amberjack or similar, which most definitely adds to the excitement!

At the end of day 1 we were saddened to see that the weather forecast had worsened, meaning that we’d be stuck with inshore fishing on day 2. There are however worse places to be relegated to inshore duties. Oman is famous for having enormous bream. In Australia this species of bream is widely sought after by sports anglers who dream of the ’40cm to the fork’ fish. In Oman however a fish of 60cm to the fork is not rare at all, so we were keen to get one! 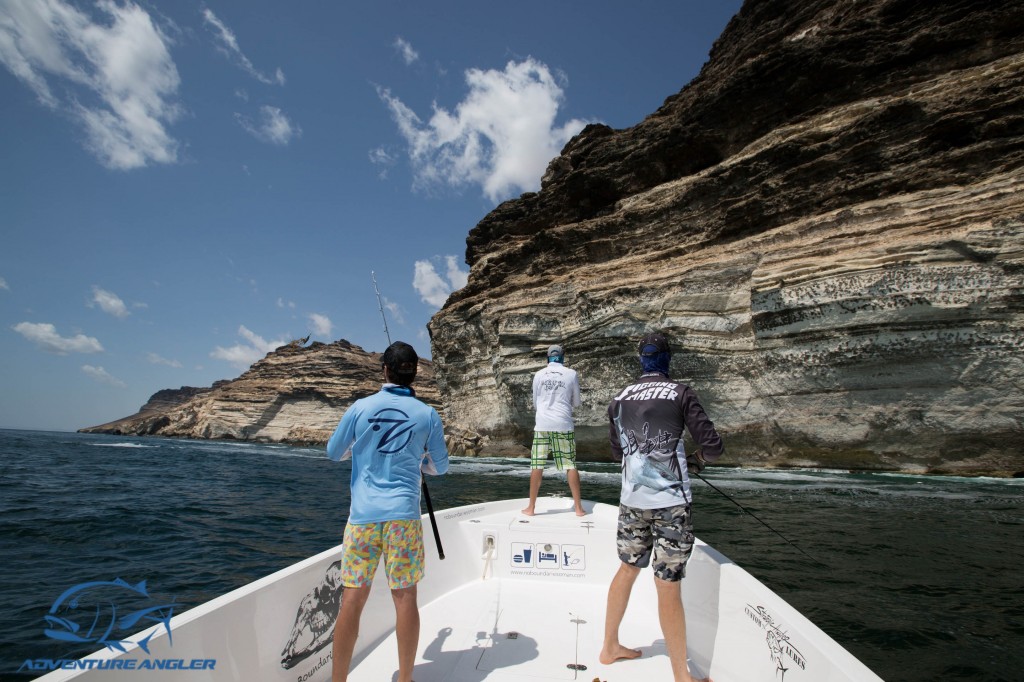 We were chasing these fish on a mix of poppers and stickbaits using a range of light casting rods including the Yamaga Blanks Blue Sniper 77/3 and the Temple Reef Stealth range of rods. The approaching cyclone however had really shut the bite down, and we ended up with only 2 bream for the day amongst us, both taken on poppers. The biggest of these fish was over 60cm to the fork, and around the 5.5kg mark and it nailed Tim’s popper right near the boat. After he’d done the hard work of teasing it (and its mate) in with his popper I flicked mine in the water next to his fish and straight away got another. Good result! Certainly PB sized bream for both Tim and I!

Day 3 and the weather had gotten worse again. This meant that we couldn’t even launch the boat, so we consoled ourselves with hours of re-rigging, a swim at the local oasis to cool off and plenty of cursing the lack of beer availability in Oman!

On day 4 the weather had improved, but not enough to make it to the islands, meaning a second day of inshore fishing was the order of the day. Thankfully the passing of the cyclone had brought the fish onto the chew, and we had a much better session on the inshore stuff with around 8 bream landed (almost all on popper, the majority taken on a Feed Cone 25) and some other trevallies and odds and sods also falling to the lures. One standout capture was Josh catching the first known bonefish ever caught on lure in Oman, which put up a great account of itself. It took a Nature Boys 155gr jig, being worked on a Temple Reef Mytho Plus 62S. Great catch! 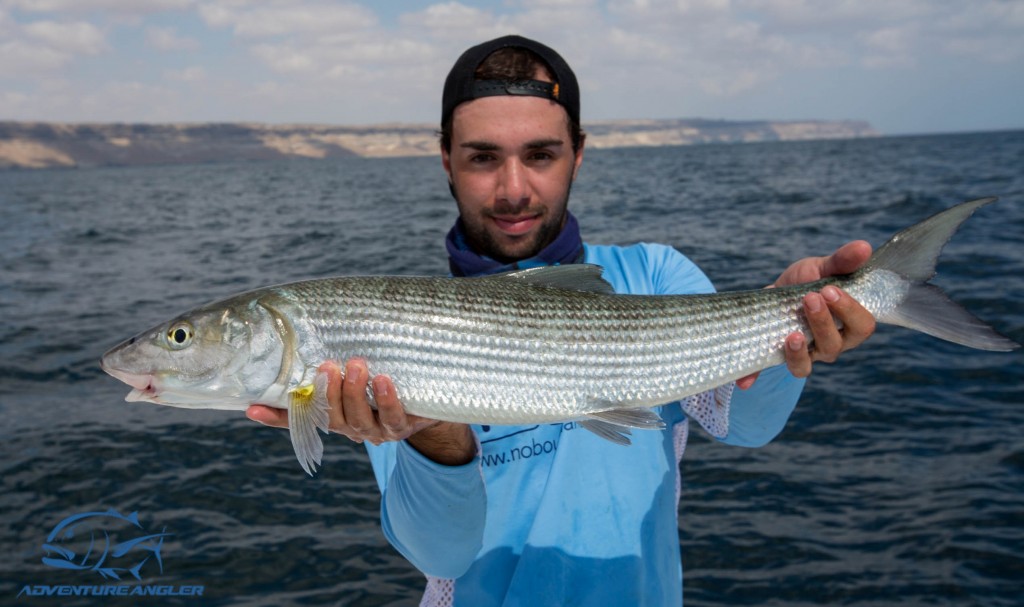 With our last day looming and us not having put a single GT on the deck yet, the pressure was well and truly on. We shot out to the islands in less than ideal conditions, ready to cast the water to foam.

Once again I reached for the Detonator 168 popper and we started to cast. Within half an hour of casting, the moment we’d waited for had come, as a massive splash erupted in the water and a GT nailed my lure. I set the hooks, and settled into what I was sure was going to be a brutal fight with what (I hoped) was an Omani monster class GT.

After spending 4 days psyching myself up for this fight the adrenaline was well and truly flowing and I got the fish in fairly quickly. It wasn’t until we had it up on the deck that I realised how big it was. 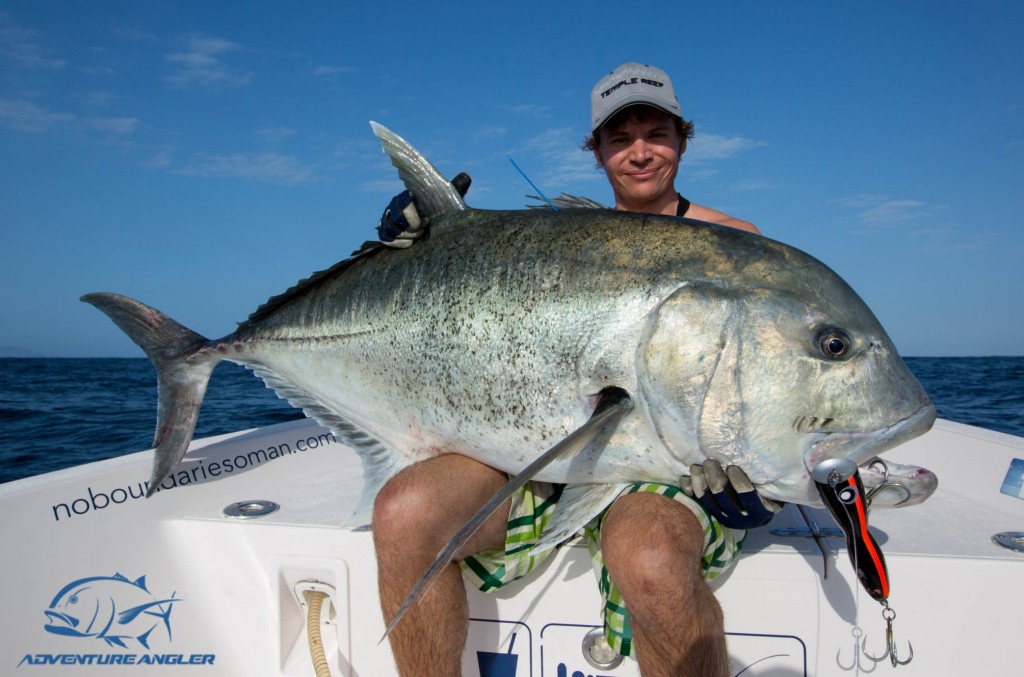 Weighing in at 50kg it was my PB GT and I was stoked to say the least. After being weighed and a few pics the fish was tagged and released, and for me at least the trip was now made. I’d have been happy catching only this one fish for the whole trip, and it’s funny how one cast can make or break a trip.

Thankfully though I didn’t have to make do with the one! The fish were really firing after the storm and we ended up landing 11 fish for the boat, 6 of which we caught in the course of two triple hookups where mobs of GTs pack attacked our lures. It was truly an incredible experience seeing these huge fish nailing your lure as soon as it hit the water with 1 or 2 other fish already mid-fight on the boat. 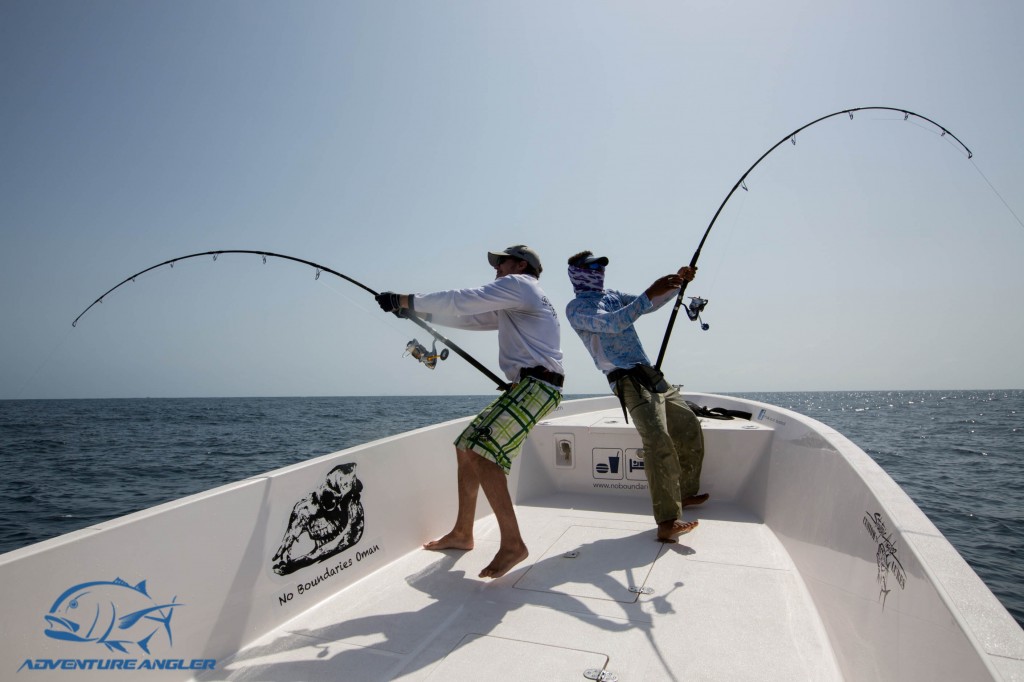 I ended up with 4 fish for the day weighing in at 45kg,46kg, 48kg and 50kg all taken on the Detonator 168, which has now earned its place on the No Boundaries lure wall of fame at the lodge where it has now been retired. Other successful lures on the day were Hammerhead Tobi, Temple Reef Balista Bull 140 and SACL Walker. I also caught a nice mahi mahi on a Craftbait GT3, which sadly didn’t give much fight on the PE10 gear, but made for some great eats that night! 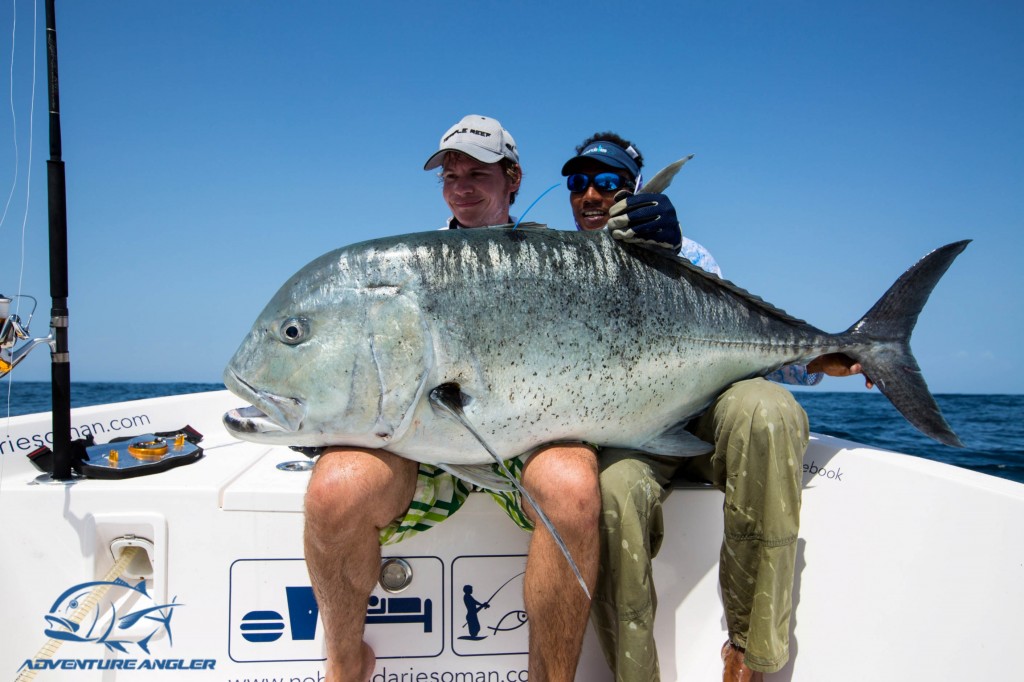 Towards the end of the day the wind had died off, and the GT bite had died off with it. With all of us having caught our PB GTs that day we were very satisfied, so I grabbed the Mytho out to try and jig up something else to go with the Mahi Mahi for dinner. Two great Spangled Emperor hit the deck in short order, with the second being a PB for me at 70cm and putting up a great fight on the light gear. 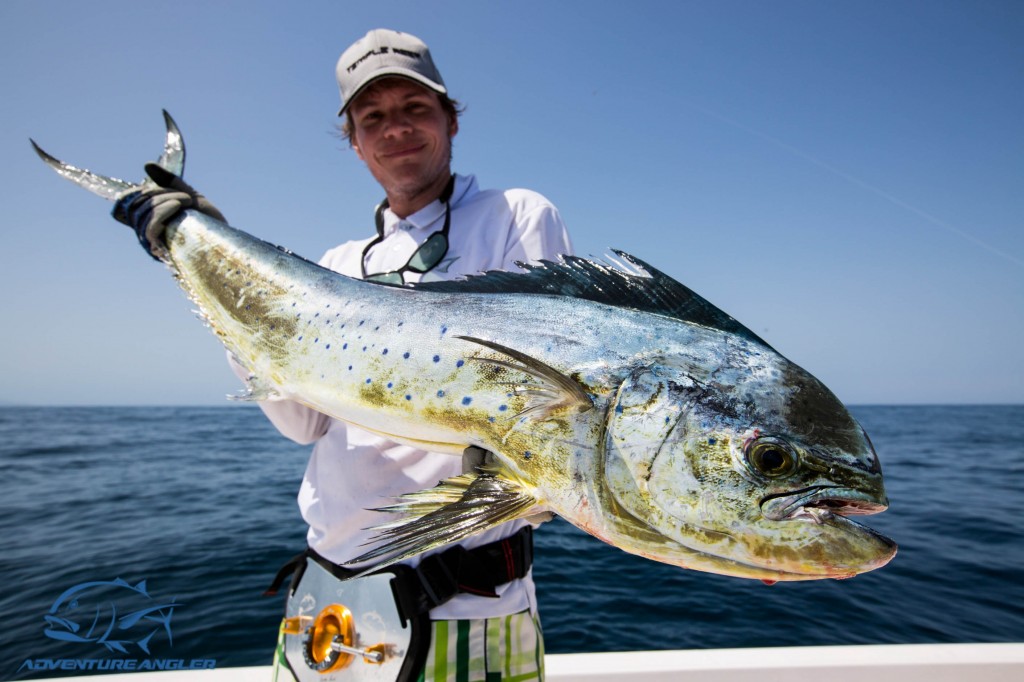 There’s no doubt that the last day made the trip, and I can’t wait to get back there. Ed at No Boundaries runs an incredibly professional operation, and the fishing there is really world class. My next trip out there is only a few days over 2 months away (but who’s counting?!) and I hope to be able to write a detailed report when I’m back.

For those who are interested in kitting themselves out for a similar trip, a large portion of the rods and other equipment used as well as more details on it all can be found on my site at www.adventureangler.net and for anyone that’s keen to follow Adventure Angler including to some exciting new European destinations, you can find lots more info on the Adventure Angler UK Facebook page. 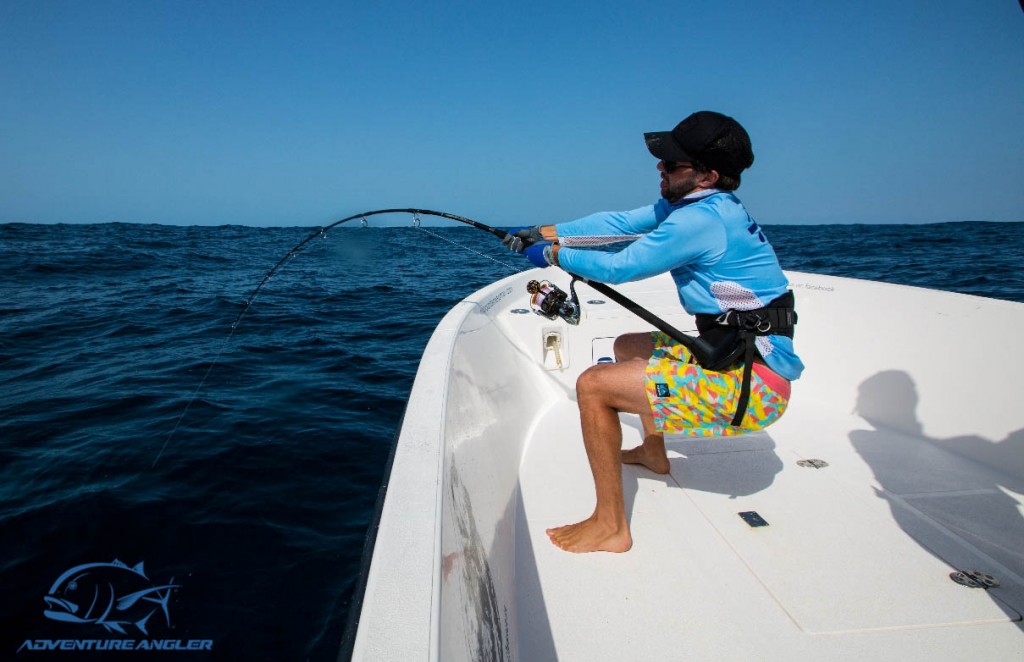 All shapes and sizes of Stellas, but primarily 18,000 sized reels with PE10 line for the GTs and 4000 and 5000 sized with PE2 and PE3 for the light casting
Shimano Ocea Jigger
Jigging Master Power Spell

Too many to mention (due to my mates being even bigger tackle junkies than me!), but the standout lures were:
Temple Reef Ballista Detonator 168 in the Black / red stripe colour
Temple Reef Ballista Bull 140 (in blue/white stripe)
Hammerhead Tobi (in a blue/silver colour)
Strategic Angler Custom Lures Walker Series (in fusilier)

SUBSCRIBE
How to rebuild your rod on a budget. Fishing in March, what to expect.