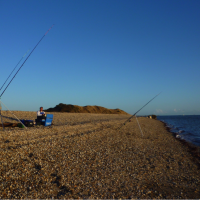 Last session of the year at Browndown

The final fishing session of the year was going to decide which out of the two of us, myself and my husband Rich, would win this year’s fishing competition, purely on highest number of fish caught. We count them to keep fishing interesting, fun, and a little bit competitive between the two of us. Rich has written an account of what happened when we fished our last session on Boxing Day. This is as it happened in his own words and an unbelievable fishing tale, one that you really couldn’t have predicted would end like this.

With the weather dictating when we could get out and fish we had our last session on Boxing Day to decide who would win our 2013 fishing competition. With a break in the weather we headed into Browndown on the Solent hoping to hit into a few Whiting with me in the lead by five fish. 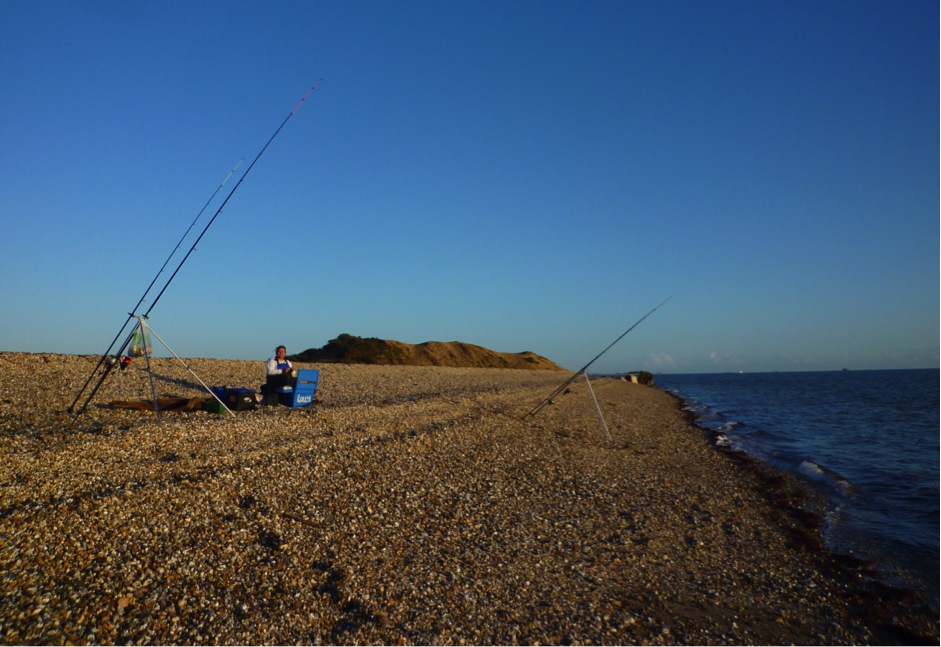 We set up the rods and started to fish during the daylight for a change, but with the horrid red weed coming through we had quite a bit of gardening to do on each cast. Lolly was in good spirits and having done a couple of fishing matches recently she seemed to have a quiet confidence about her.

With the weed hanging onto the boom flapper rigs we were both using, it was hard to detect the bites so we checked the rigs frequently. Lolly wound in. First fish of the day to Lolly, a whiting. Now four behind.

As darkness descended I land another Whiting to get my five fish lead back. Then Lolly is into a trio of Whiting. Now two behind. Then she does it again, taking the lead by one fish. Her surprised look says it all. 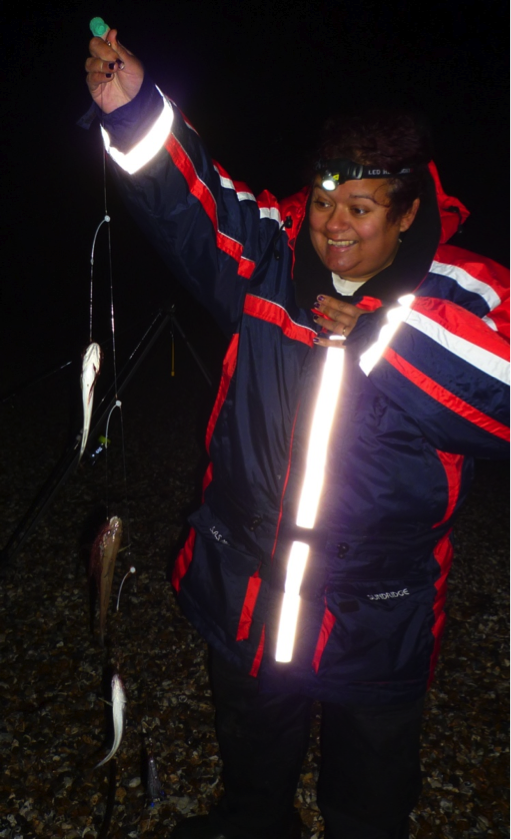 I then scratched back with a small Whiting, equalling the score. On the next retrieve, Lolly declares her next catch to be another three Whiting. This was not looking good for me. I pulled in another Whiting closing Lolly’s lead to 2 but with her bringing in triple shots I was beginning to think it was going to be Lolly’s win.

Next fish went to Lolly with a beautiful Pouting putting her 3 in front again. I then got another Whiting bringing me within two fish again but I could feel this session going away from me. I came out leading by 5 and was now chasing Lolly again. I needed something special. That moment came with my next retrieve, a double shot of Whiting putting the scores all equal again. 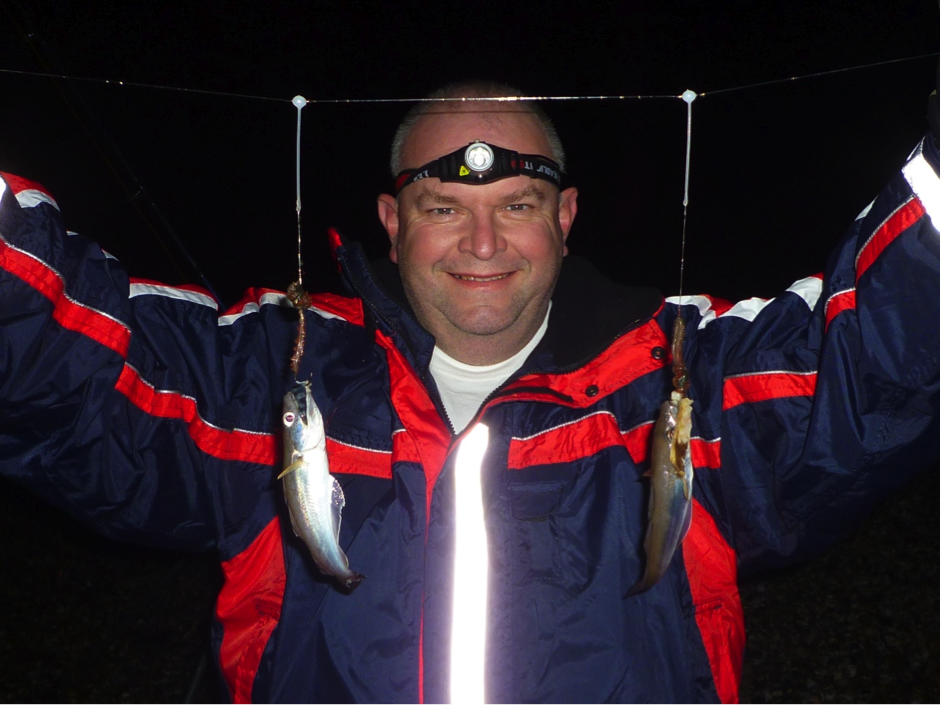 With the bait dwindling we were down to enough for one last cast. The tension was really mounting as we cast out at the same time and waited for bites. A whole year of fishing coming down to the very last cast. You could not have written this!

As we waited my rod bounced into life but it was a moment to think, do I bring it in or leave it out for another fish to bite? I wound in only to find there was nothing on there! I could now only hope to draw. Lolly kept her rod in the water but with no bites showing  she wound in only to reveal that she had no fish as well. So the result for the year was 318 fish each. A draw!

Lolly had a 12 fish lead at one point in the year and I had to fish my butt off just to stay within striking distance of her and at the end of the year it came down to just one last shot. We both agreed that neither of us deserved to lose, so the draw was a great result.

What a year 2013 has been! We have fished allsorts; from boat, pier, beach, and all different methods including LRF, ledgering, lures and float; we have even fished in Florida. We’ve had some new personal bests and I’ve even had a go at match fishing. We’ve enjoyed catching fish from just inches long, to a 12ft Hammerhead shark and everything in between. It really could have been anyone’s win this year, and then it came down to the last cast as bait ran out. You really couldn’t have written this. Thank you to the humble Whiting for making this final session so exciting. This is what keeps fishing interesting and exciting for us, and our love for just catching fish, no matter how small or how common. Once you lose the love for that, you’ve lost your way in fishing.

The draw is a fitting result for this year, we’ve learnt so much, improved our skills, and met and fished with some truly fantastic people throughout the course of the year. Thank you all for widening our experiences. And here’s to next year, onwards and upwards as they say. Roll on 2014 for the next fishing adventure. Until then, 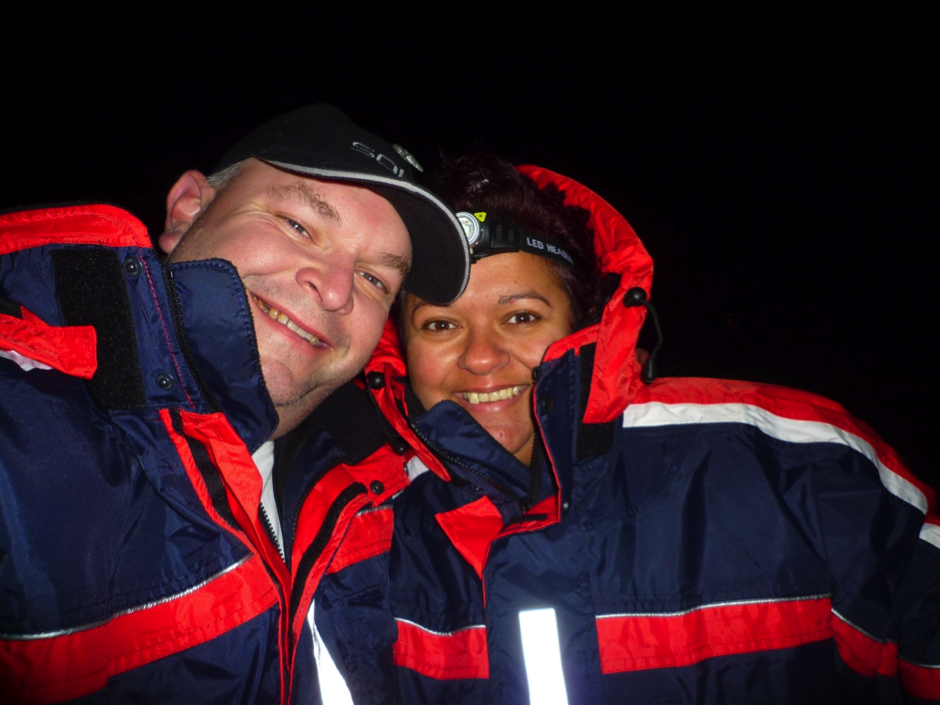