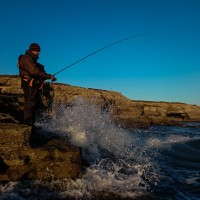 Have the Cod gone?

After months of brilliant Codling fishing, it seems that the run is finally coming to an end. Reports from the past week shown a marked decline in the numbers of Codling being caught. Yesterday I did manage number 299 since September, but that was after sitting on Chesil all day with all of  the best baits, that have been catching recently. 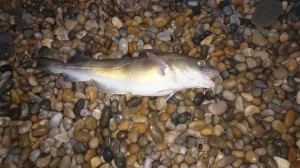 This is nothing unusual, as the Cod normally move on from Chesil during January. I am uncertain where they go to or why, it may be that they head further north to their breeding grounds as the water temperature falls, or as some suggest, they chase the shoals of sprats that head into the deeper water.

I think that if the conditions are right, we will still see a few being caught, especially at the deeper water marks such as Langton Herring and Bridging Camp. or immediately after a big blow.

So if the Cod are going, what else can we fish for? Well there are plenty of Whiting around and they should stay around for at least another 6 weeks or more. The shallower beaches such as West Bexington always seem to produce more fish. As the water temperature hovers just above the 10 degree mark, the Bass fishing is pretty much coming to an end as well, but there is always the chance of a larger Bass.

Phil Wilson managed a lovely Bass from Cogden on double peeler yesterday to prove that they are still around. 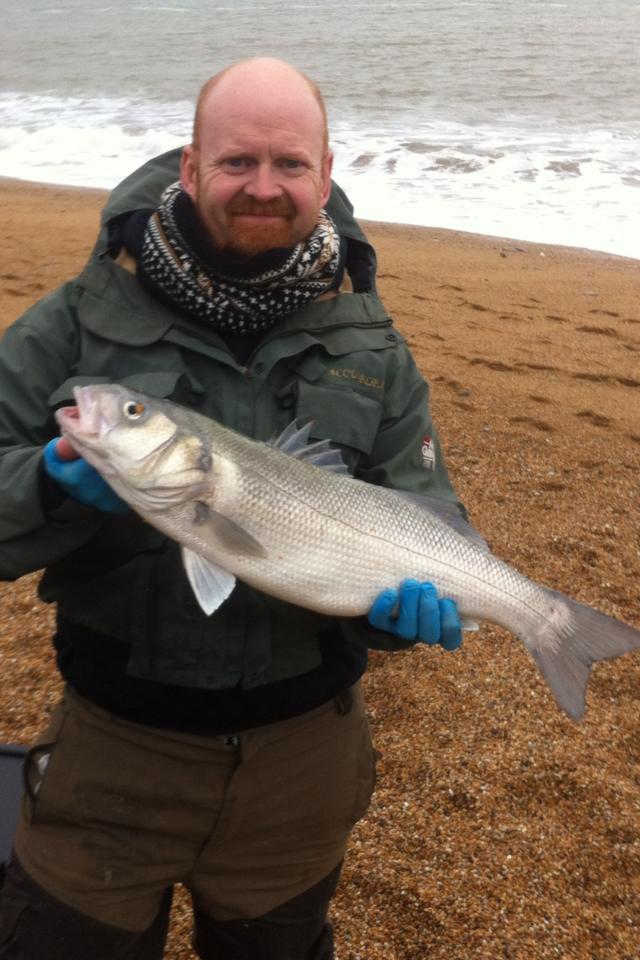 If Bass are not your cup of tea how about a double figure Thornback from Chesil, caught by Paul Dixon on a Mackerel fillet. I also know of an Undulate of the same size. 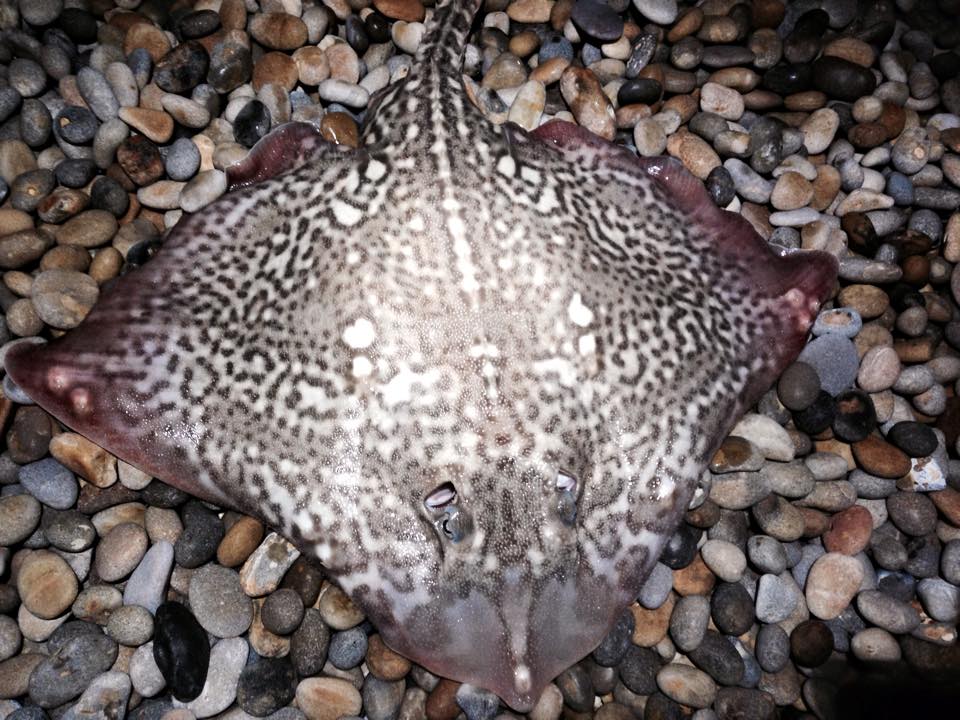 I hope you all like the new style of the website. We (ok Adrian) spent most of yesterday ironing out the inevitable bugs, but if you find things are not as they should be then please let us know either through comments or email him directly at adrian@fishingtails.co.uk

One of the areas that quite a few people complained about was that there were no longer wind and tide details. We still have these, but we have taken them out of the home page articles, but they are still there if you go through the reports section. This is to allow us to put in the weather and tide details for different areas as we expand further.

Chesil Beach forecast: With winds forecast to be mostly strong from the SW for the next few days, Chesil is not going to be the most comfortable mark to fish, if it is fishable at all. There are a few windows that will be fishable, and during those you may be able to track down the isolated shoals of Codling. If you head more towards Abbotsbury and West Bexington, you will stand a better chance of picking up some Whiting.

Portland: I had a go at lure fishing from Portland yesterday, but conditions were not ideal. 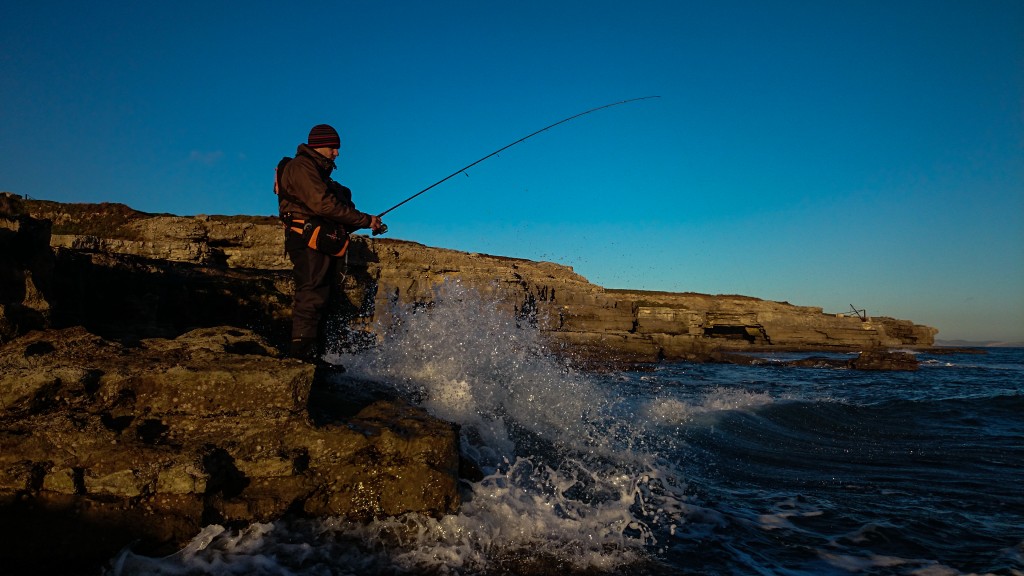 I was unable to fish the West side over low water, as the wind was too strong for lure fishing. So we headed for the eastern ledges to the east of the Bill. Conditions were much more pleasant as we were able to get shelter from the NW winds. However trying to fish the much shallower ledges proved to be a waste of time. I was hopeful that we might see some Pollock towards dusk, but they were absent once again. If conditions were a little bit more settled I am sure we would have caught a few.

I am fairly certain that if you were to target the Wrasse on bait, you would be successful. Although there is a bit of a swell, the water is pretty clear and the temperatures are still high enough to encourage the Wrasse to feed. At this time of year I normally use hardback crab, fished on a single 4/0 hook on 30lb line, tied to a 3 way swivel. I also use a rotten bottom attachment with a 4oz. weight on the swivel to help get a fish back should I managed to hook one. The Crabs always seem to get the bigger fish.  If the Wrasse are around in numbers, it can sometimes be worth trying Ragworm. The Ragworm may also pick up a Pollock or two.

Portland Harbour: I also fished a large area of the harbour with lures  yesterday, to see if there were any late Bass still around. Unfortunately the harbour looked pretty quite, with no sign of the birds working bait fish, and not a single Cormorant, that would indicate there was any food source for the Bass.

This doesn’t mean that the Flounder fishing wont be good. Marks such as Hamm Beach and Sandsfoot sailing club, are ideal in strong SW winds, and I would expect to see quite a few Flounder from either of those marks.

Weymouth Bay: Lots of Whiting coming from both piers, with some of them being more than a 1lb. The Flounder fishing from the piers and into the harbour is very good at the moment. If you try using small sabiki lures there is a good chance of picking up some Herring.

Preston Beach is a good mark to choose for those after a fishing fix, and not wanting to be blown away on Chesil. It rarely produces and Codling, but it makes up for that with loads of Whiting at times. Dabs and Flounder feature in catches, as do the odd late Bass. Worm baits work well at this venue.

4 Responses to "Have the Cod gone?"