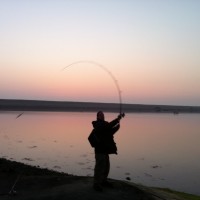 How can I catch a bass on lures from the shore in Dorset? As a fishing guide I can tell you , you dont have to spend hours lure fishing to catch Bass. Most of my sessions are fairly short, sometimes as little as 15 minutes, but most last a couple of hours. It is all about knowing when and where the fish are most likely going to be.  I have quite a few clients that want a short insight into Bass fishing and joining me after work for a couple of hours chasing Bass on a lure is ideal for them. 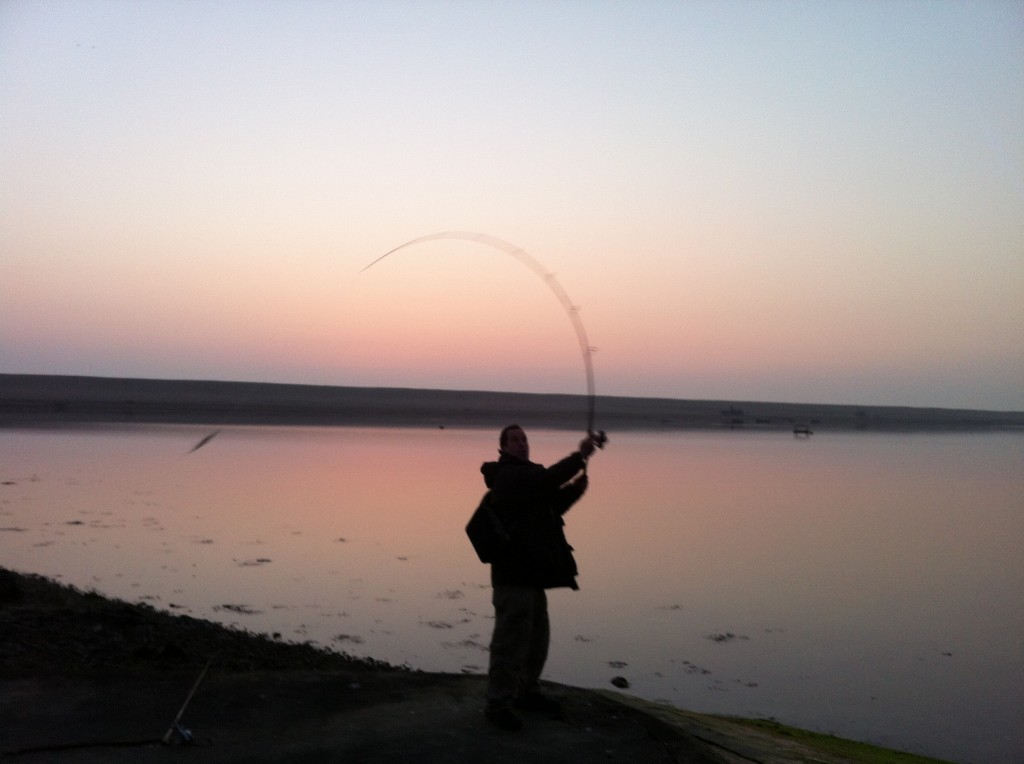 Last week I was contacted by James, who told me he had never caught a Bass in the 2 years that he had been trying for them on lures. He wanted some pointers on where and when was the best time to go and what are the best lures to use. Due to his busy work schedule all he could do was fish a 2 hour session. What he was asking was a bit too much to fit into such a short session, so I suggested that we meet a few days later and try a couple of hours on Portland to work on a few techniques, and I would show him a couple of good spots.

We had been having a few days of settled weather with light winds, making the sea conditions fairly calm with clear water. On the afternoon of the day we were due to meet, the conditions suddenly changed. A fresh SW force 5 sprang up creating  2m high waves and a lively surf. Perfect conditions for Bass on a certain mark that I keep as a bit of a secret. A quick phone call to James to see if he had any waders in the car, which I thought was unlikely, as he was already on his way. As luck would have it James works for Dorset Wildlife Trust, and often wears waders for work.

We met in the car park and I explained why I had decided to change venue. James was somewhat dubious as to whether we would be able to fish in these conditions. He was convinced I was mad as we approached the beach, he cold see the size of the waves and could feel the wind blowing in our faces. I could feel the excitement course through my body, as I knew conditions couldn’t be more perfect. I was certain James would get his first Bass.

As we approached the surf at my chosen mark, I explained to James that we would not be able to cast very far, but we wouldn’t need to, as the Bass were probably only  15ft out. We clipped on a Megabass Zonk 120 and cast it as far as we could into the wind. Instantly James complained that he could hardly cast it 10m, and that we were wasting our time. “Trust me”, I told him “I know what I am doing”. Sure enough after a couple of more casts James felt a thump on his rod. “I think I have just had my lure smashed onto the shingle” he shouted over the noise of the surf. Then with a realisation that their was actually a fish attached to the end of the line, his face transformed into a huge smile. I rushed over to him to talk him through landing it in the ever increasing surf, but with in a few minutes he landed it like a seasoned pro.

James could not believe that he had at last caught a Bass and a lovely one at that. I estimated it to be around 3 1/2lb, but I am sure James will tell you it was bigger than that. 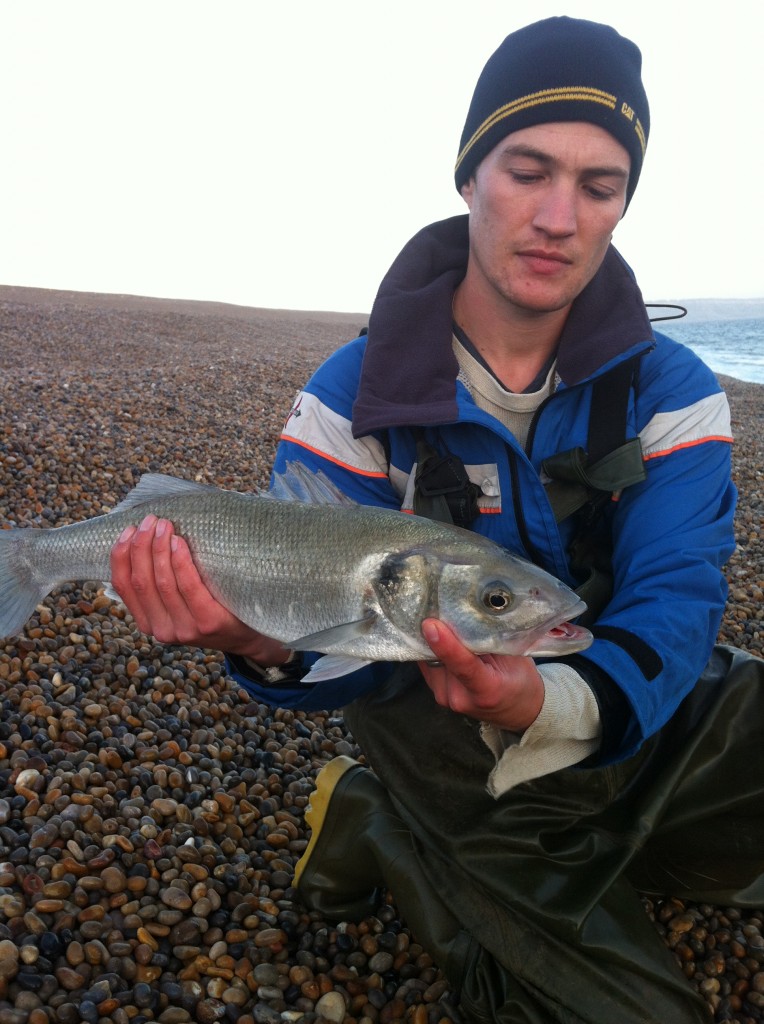 After catching it James wanted to sit and enjoy the moment. I was not up for that. I jumped and headed straight back to face the elements, turning round and shouting to James to hurry up as the window of opportunity would close shortly, as the waves were steadily increasing in size. Soon it would be too risky to continue fishing.

I lost my Zonk 120 and decided to try a new lure which I shared with James. I opted for a Seaspin Mommotti 140. Within 2 casts I had a fish on and landed a similar sized fish to the one James had just caught. This spurred him on to get going again. It wasn’t long and we both had another couple of smaller fish landed. 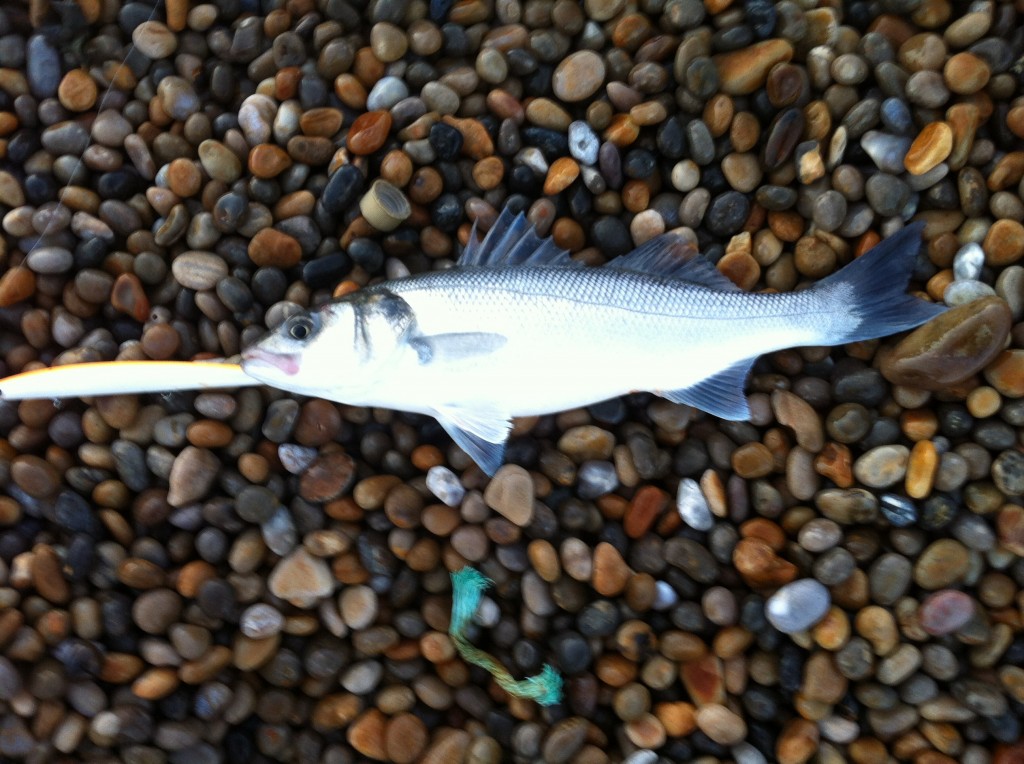 All in all it was a great short session, just proving that with the right knowledge, you can make the most of an opportunity in the right conditions and make the best use of your fishing time.

One Response to "A short Bass session"