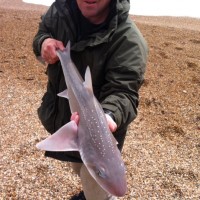 I notice that that sea temperature is increasing fairly steadily again. With some luck that might tempt some more summer species to move a little further north in to our waters. I had a very good day fishing yesterday, with a short session on a completely empty Chesil in the morning taking a customer on a 1 to 1 lesson, which resulted in a nice Smoothound of around 5lb. This was followed later by a lure session covering dusk and into darkness. I was delighted as I used some of my new soft plastic lures that I had developed. They worked even better than I had hoped, resulting in several Bass landed to 3lb. Unfortunately I couldn’t work out how to get the flash on my iPhone to work so no pictures of the Bass this time. 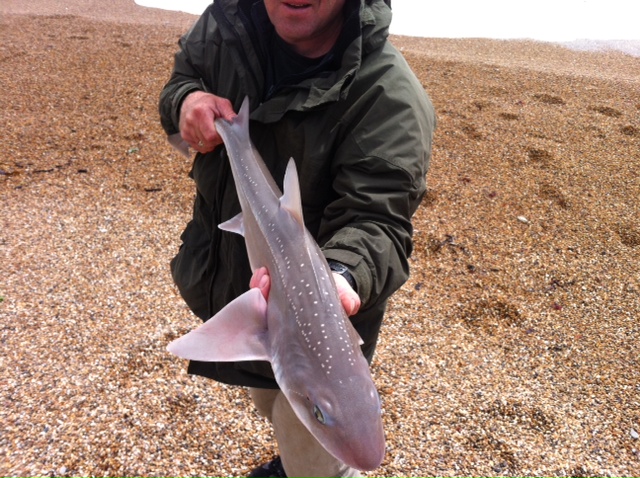 I have just been looking at the site statistics and I am delighted to say that since starting in late February, the site has now surpassed the Million hit mark.

Chesil Beach forecast: The slightly rougher weather has pushed the Mackerel outside of easy casting range. You need to be getting at least 80yds to be able to target them, but that is a distance that with a little practice most people should be able to achieve. Other species that are within reasonable casting distance are Gurnard, Bream and Bass. Try using a Mackerel head no more than 15ft out. If you look back at the beach behind you and imagine that those shelves and steep banks are replicated further out into the water. You want to place your bait on the shelf immediately out in front of you. There will be an extra 10 to 15ft of water within a couple of rod lengths. It is an area that holds lots of fish at different times, but the most common ones are Mullet, Garfish and at dusk Scad and Bass. As you move further West along Chesil and especially at the furthest extremes of the beach the water is much more shallow closer in and slopes more gently. This creates warmer areas that flat fish like to use as ambush points. Ragworm tipped with Black Lug and Sandeel or Peeler Crab baits all work well, especially if you fish it using a simple flowing trace.

Portland: I will be heading for a Wrasse session on Portland at some time today. I want to try my new soft plastics on the Wrasse after last nights success on the Bass. I may pick up a Pollock at the same time, though the best time to catch a Pollock is at dusk. You can off course try catching your fish with some smelly bait such as Ragworm for the Wrasse and Mackerel strips for the Pollock and Garfish. Night time sessions with big fish baits should produce a Conger or Bull Huss.

Portland Harbour: Wrasse and small Pollock are being caught around Ferrybridge. Mullet are plentiful around Sandsfoot Castle.

Boat & Kayak fishing: Plenty of good Turbot and Plaice coming from the Charter boats, but not many people are fishing in Portland harbour so I can’t say what is happening in there.