Fishing Tails > All Articles > Reports > Chesil Beach > Will Chesil Beach ever be the same again.
Back to basics No Plaice showing yet. 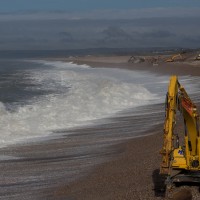 Will Chesil Beach ever be the same again.

I had a walk down to Chesil Cove this morning to have a look at the fishing conditions. I can not believe how much the eastern end of Chesil has changed. The picture with my lens cap, shows the size of the pebbles that we are used to in the Cove. Now most of those have gone and we are left with pea sized shingle. The environment Agency are struggling to prevent the sea defence wall in the Cove from being swept away, as the foundations are becoming exposed.

Despite lower winds there is a wicked swell hitting Chesil. So much so that the only water users were surfers, enjoying waves that any Cornish surf beach would be proud of. The size of the swell makes the beach almost impossible to fish at the moment unless you are a long range caster. If you are planning on coming down to fish Chesil this evening (Friday), you might want to re-think your plans. It should be much better tomorrow, as there is very little wind forecast. 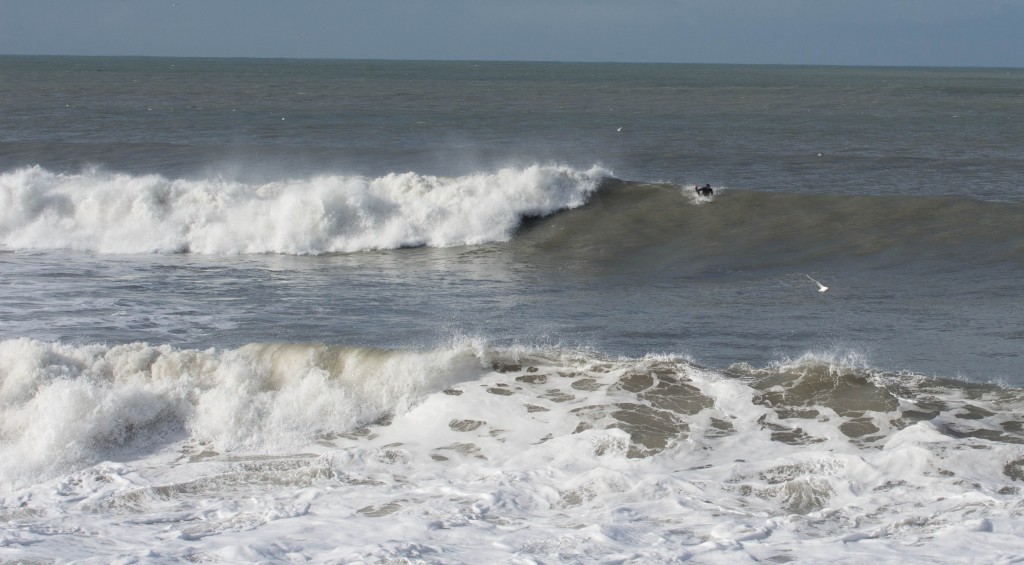 There is some good news; Abbotsbury is now open. Vehicles can now pass through the village. I am sure Tom at Abbotsbury Tackle will be delighted to see customers back in the shop.

Chesil Beach:  Large swell up to 4m. The water is heavily coloured.

Portland: Swell in excess of 4m with  coloured water.

Weymouth Bay: 1.5m surf, with the surf line going out at least 100m. Water is coloured

Chesil Beach forecast: Fishing on Chesil is going to be very difficult until the swell drops down a bit. Because the surf line is running so far back you are in danger of having your gear buried under the shingle on every cast. When it does drop fishing may be quite good. There are a lt of birds feeding close in to the shore, indicating that there is plenty of food in the water.

I know not many people have been out fishing recently, but I know that a few that have been, have managed several Bass in their catches. It is unusual to see Bass during February, but the water temperature has not got as low as it normally does. Hopefully this has not prevented the Bass from moving to their breeding grounds.

With the water still very coloured, I would expect to see Whiting, Pout and Dogfish during the day as well as at night.

Portland Harbour: May be worth a try for some Flounder, but apart from that, it is very quite in the harbour.

Weymouth Bay: If there are still Bass around, then Preston Beach and Greenhill are well worth trying, as there is a lovely surf washing in there with this easterly wind. Bass love feeding in the shallow surf. Peeler Crab, Squid and Lugworm will all catch if the fish are there. Keep it simple and light, just use a pulley rig and a large bait.

One Response to "Will Chesil Beach ever be the same again."