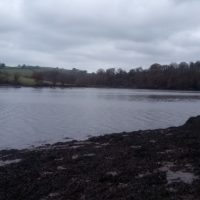 Journeying around the South Devon coastline visiting different venues, the fishing has become pretty tough in the past couple of weeks, typical of this time of year. The weather certainly hasn’t helped matters. East winds have buffeted the coast for nearly two weeks, not a friendly wind direction for most of the open coastline in South Devon. The flounder fishing, always a good option when the coast is rough, has not really kicked into gear either. I have tried my luck a few times but it has been a struggle, here is my latest report from a couple of recent sessions.

Having looked back at my recent set of fishing sessions I noticed that I hadn’t ventured to a venue on the open coast since the end of September. In my last posting I speculated that the East winds might see the bass feeding in the surf. With that firmly in my mind I decided to put the flounder fishing on the back burner for a week to try my luck with the bass. With such a huge range of venues to choose from it was difficult to make a call on where to head to. One mark did spring to mind however, Beesands beach in the South Hams. This beach has become one of the premier beaches in the area in recent years. Huge numbers of plaice have been landed in the spring from this stretch of shingle. Smoothounds, sole, dabs and an increasing number of spotted and small-eyed rays have been showing though the autumn and winter months. I hadn’t fished the beach for years and decided it had to be worth a visit. Joining me for this trip was my good friend Mark. Both of us were concerned that the strength of the wind would make the beach unfishable but as always I had a backup venue in mind. Driving along the road past Slapton the sea state there did not look too bad with swell crunching the shingle. Beesands is the next beach along so our confidence rose. As we pulled into the small car park I was very surprised by how much the beach had changed since my last visit. The huge winter storms of the past few years have completely altered the beach. The shingle bank is vastly reduced from what it once was with the western third now filled with rock sea defences to protect the sea wall. The road along to the East at the back of the beach no longer exists. We surveyed the beach, watching the swells and waves sets in murky conditions. It was rough, very rough but there wasn’t any visible weed in the surf line which would have made it unfishable so, after a chat about it, Mark and I unloaded the gear and got ourselves setup. It was pretty clear it would be a tough session casting into the teeth of a strong, cold wind. When you are prepared to tough it out from the outset I find it easier to put up with the conditions though. We both fished large baits close in feeling that a decent bass would be our primary target. I also used a second rod with small baits to gain a bit more distance. Bites were very tricky to see with the waves breaking over the lines on numerous occasions no matter how high you got the rod tip up in the rest. Fortunately there wasn’t any weed and holding bottom on the flood tide was remarkably easy. Darkness came over the beach an hour before high water and the fish came on the feed. Unfortunately not the bass we were hoping for but a whiting on my small frozen black lugworm bait. 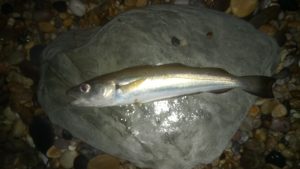 At around half a pound this is the average size of fish I would expect to see at this time of year. With whiting around I tried a live bait rig on one rod in the hope a bass would pick one up but this didn’t attract the necessary live bait! More whiting followed as the tide started to ebb, with a couple of double shots coming up the beach. As the tide dropped further though the waves increased in size and power and our lines started to get buried under the shingle signalling it was time to pack up. On returning to the car we realised we were both encrusted by salt spray! A brutal session at times but worth a go. It wasn’t a surprise to find the whiting but the lack of any other species was.

With more East winds raging throughout the following week I decided it was best to avoid the coast and continue the flounder campaign. My dad joined me again for a session in the Dart Estuary. Flounders are an elusive target in the Dart Estuary but they are there. I have witnessed cormorants taking decent sized fish every so often. The Dart winds its way through South Devon and is a deep water estuary with many marks to choose from. Most involve a bit of a hike to get to. Our session was to take place on a rising tide at a spot on the main river not too far from Stoke Gabriel, many miles upstream from the river mouth. We arrived in failing light onto a deserted foreshore flanked by high banks of trees providing protection from a cold wind. Conditions on the estuary looked excellent. The fishing had been good to me at this mark previously for bass and eels. 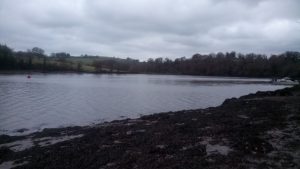 We chose to set up on a small rock promontory with the deeper part of the channel almost below our feet and mudflats either side. My dad was using large ragworm baits and I had some lovely peeler crabs, both top flounder baits. We lost the light soon after setting up. The peace and tranquillity of the location was only occasionally broken by the hoot of an unseen tawny owl. Bites were few and far between initially. Crabs stripped the hooks bare. As more water flooded into the area the fish did come on the feed. The bites were strange rattling affairs which didn’t look like either school bass, eels or flounder. We both failed to hook the first few. I left one a bit longer to develop but nothing further happened. A reel in to change the bait revealed the fish behind the bites – a whiting of about 6oz! I knew that we had had very little fresh water in the estuaries for a few weeks but I never expected to hook into whiting so far up the river! More of these mini whiting followed. The bites were only interrupted by finger long school bass hitting the baits. 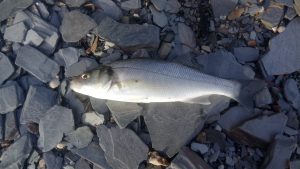 We enjoyed a calm evening out of the wind. However once the ebb tide began we had to call it a night. The tide run on the ebb was fierce and our lightweight rods and leads were not able to cope. With the main channel less than thirty yards from the foreshore even a bait cast in close was being swept along at a rate of knots! Another tough session but great for the learning curve on how far upriver the sea species will venture given the right salinity in the water. The whiting certainly are everywhere! This is a mark that will be worth a try again in the future to see what else the deep water might hold, it certainly looked a great spot to find some larger bass in the warmer months.

With the East winds blowing the fishing has been patchy for many people along the coast. The whiting are out in force at the moment with large bags of fish up to 1lb available from most of the beaches, the average size being 8-12oz. These were accompanied by the odd dogfish and pout.

The wind has now switched back to its prevailing South Westerly which will calm the seas down quickly. Flounders will be the target for many in the lead up to Christmas. Mild weather will mean the crabs will be feeding in the estuaries making it tough to get through them to find the fish though. However the mild weather will also mean that conger eels, large bass and occasional mackerel and garfish will all be viable targets from many of the open coast venues. There is always an very outside chance of codling showing at the deep water rock marks in Torbay but getting through the whiting shoals can be an issue.

One Response to "Whiting Everywhere"