Fishing Tails > All Articles > Reviews > Rods > The Pen Rod – Mightier Than The Sword?
Squid starting to show on the South Coast Fishing in September, the best month of the year 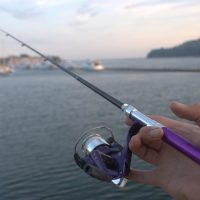 The Pen Rod – Mightier Than The Sword?

You will have likely seen a ‘Pen Rod’ in your time perusing the internet for fishing tackle. If you’re not familiar, they are a very cheap and short telescopic rod, that collapses into a comically oversized pen, complete with lid (though lacking any ink!). For the bargain price of little over five pounds you could be the lucky owner of one, but is it just a novelty or a genuinely usable bit of kit? I recently bought one to find out, this is my short guide on how to use these bizarre rods. 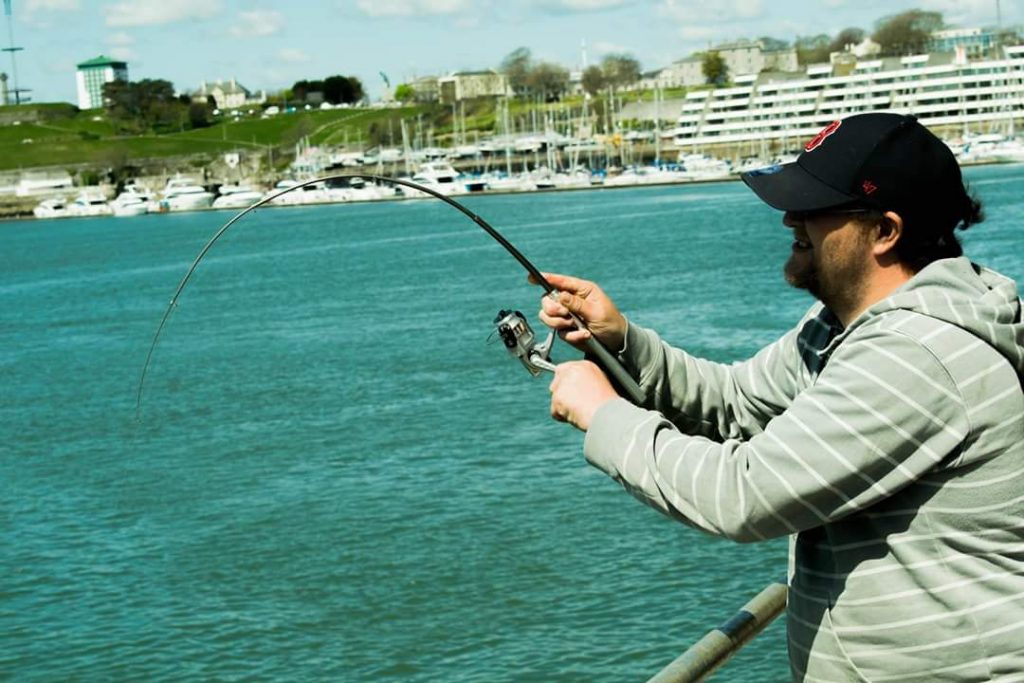 Plymouth local, Ben Grout bent into a decent ballan wrasse on the Pen!

First of all lets get the negatives out of the way…

Being under a tenner and mass produced in China is not a hallmark of quality, and you can seriously tell! They come in that horrible plastic packaging that will quite vindictively cut you if opened wrong. They are also very light and flimsy, the eyes only line up if you force them too and the reel’s drag leaves a lot to be desired. But then again we’re not expecting fine workmanship here, what we desire is a rod that will make our mates laugh whilst also being genuinely capable of landing a fish. So does the pen rod succeed in this mission?
I have to say 100% yes in the laughter test, more like 50/50 when it comes to the job it’s actually designed for. 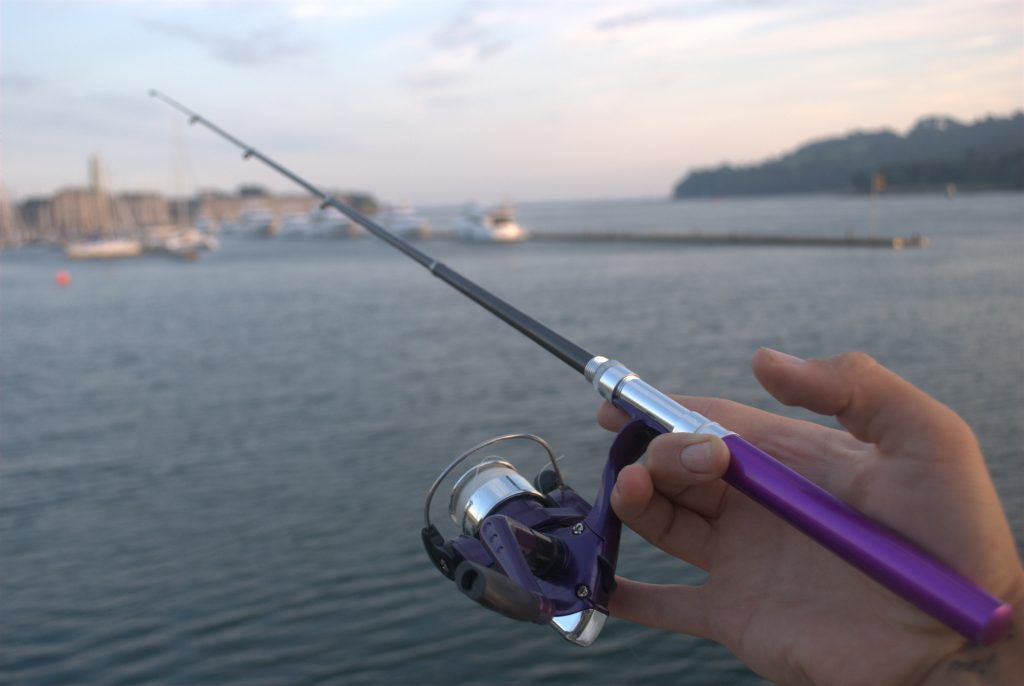 Definitely more of a toy than a fishing rod, The Pen Rod can be so bad it’s (nearly) good.

The action is certainly slow, with the 50cm or so of telescopic rod bending right to the handle. Bite indication is unexpectedly ok, as long as you haven’t been using a decent LRF rod beforehand. The constant free movement of each section can certainly grate on you, so make sure the rod is fully extended and secure. Though it really struggles with any decent size fish, in my time using my Pen Rod I was never concerned about it breaking, which is either a testament to the sound engineering of the Chinese factories or my devil-may-care attitude to a rod that cost less than a pack of Isome!

The line that comes pre-spooled on the tiny plastic reel has more memory than an elephant, yet it is also surprisingly hardy – when caught in snags I had decent hooks bend out before the line broke, so at least it’s tough. A real connoisseur of the Pen Rod would change the line but I found it more compelling (and simpler) just to fish it as it arrived, but if you intend on using it with the kids (who, lets be honest, are the only humans capable of pulling off the Pen Rod look), I would recommend changing the line to something less tangle prone. As mentioned before, the drag is not smooth and gave out on me a few times whilst playing larger fish, but considering it’s made out of plastic and not much else, you can forgive its comical awfulness.

My biggest tip I can give to anyone desiring to try one for themselves, is use a heavy weight. A two gram jighead will just coil up in the spring-like mainline, you need to go heavy, up to an ounce or more. This will give you the control and the tight line required to detect bites, it will also help you cast a surprisingly (if not completely accurate) long distance. The rig I used was incredibly simple. Essentially a simple Carolina-style rig, an in-line lead, bead, split shot (to stop the weight getting too near the hook) and a size 12 hook. Using this combined with Isome (you could just as easily use ragworm or mackerel) I caught a great variety of species in my local marina. Try to fish over fairly clean ground at first, preferably off a harbour wall or pier where the water directly below you is deep. Once you are successful, you can push yourself by fishing rocky gulleys or changing to techniques like dropshot. At the end of the day it’s a piece of kit to have fun with, how you use it is up to you. 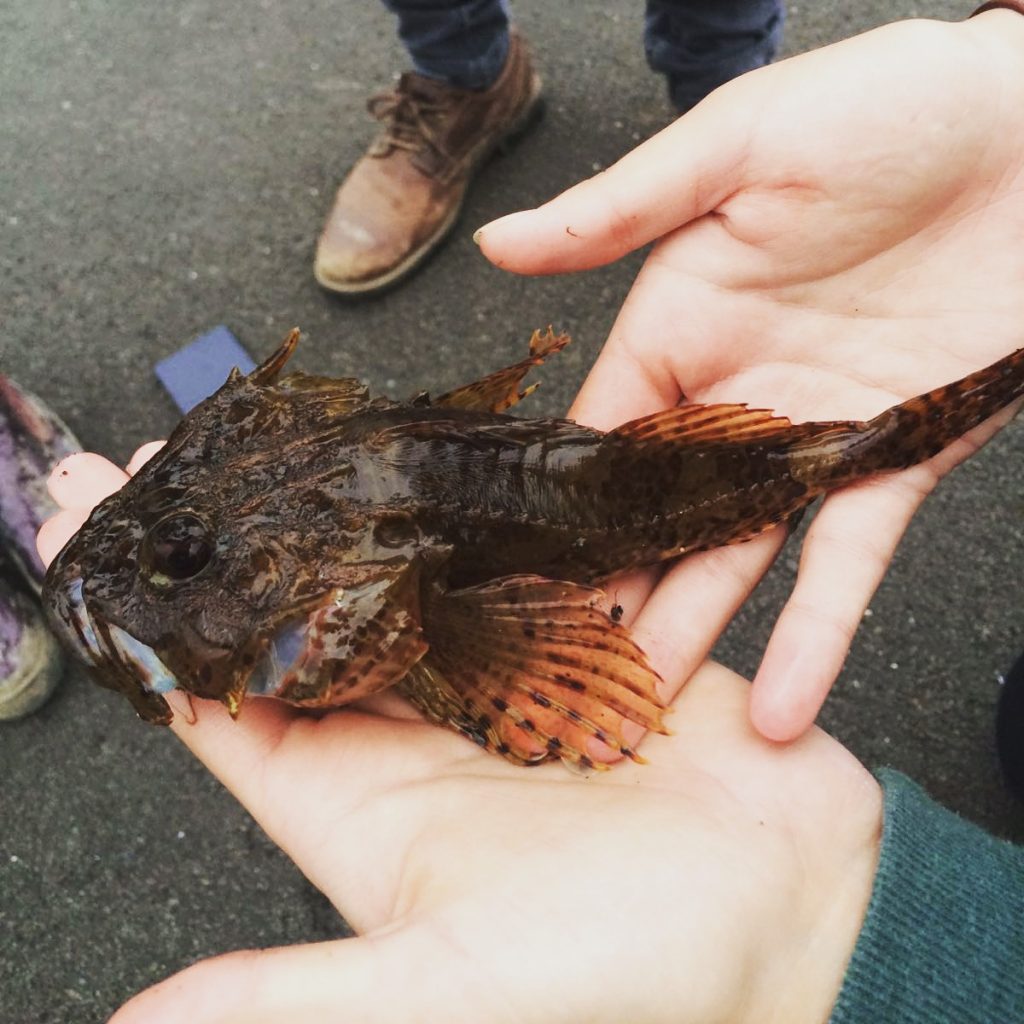 Succesfully catching species such as this specimen scorpion fish, feels all the more satisfying when caught on such laughable tackle.

So, what realistically can it handle? In the right hands over clean ground with plenty of luck? Pretty much anything up to ten pound. But it’s definitely not built for that kind of stress and it’s quite obvious this is a rod built for catching the tiddlers. It will make mackerel and small wrasse feel like leviathans and you’ll quite likely curse it’s unreliability if you hook anything bigger than that. You can have fantastic fun using it for species hunt’s though, as I did when I recently took part in a local competition, the variety keeping you casting, wondering what fish will fall next to the power of The Pen!

So you might look like a complete fool to the passing strangers, but you might also rekindle some of that childhood joy you only get from terrible tackle and simple tactics. There’s only one way to find out and that’s to try it yourself.

If you enjoy unusual fishing, species hunt’s and stories of me falling over, then I’m sure you’ll love my blog, have a look at http://www.fishchallenge.blogspot,co.uk

SUBSCRIBE
Squid starting to show on the South Coast Fishing in September, the best month of the year

One Response to "The Pen Rod – Mightier Than The Sword?"