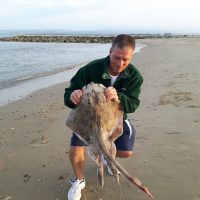 As I left for my holidays the summer was really hotting up, not just in temperature but in fishing terms as well!  With big stingrays, large smoothound, bream and bass all being caught locally in good numbers I was almost disappointed to be going away. On arrival back in the UK. I caught up with Fishing Tails and some social media sites to find things had got even better with Smoothound getting bigger and being caught in higher numbers.

That was all the incentive I needed and by Tuesday night I was down at the beach armed with a bucket of peelers and a flooding spring tide, ready to get my fishing fix. With it being so warm shorts and tshirt was the dress code for the evening. My favourite type of fishing.

After setting up two rods both blasted as far as I could get them. I noticed the angler next to me ,Cliff Brand, bent in to a good fish. After a good tassle Cliff walked a 12lb undulate ray up the beach. 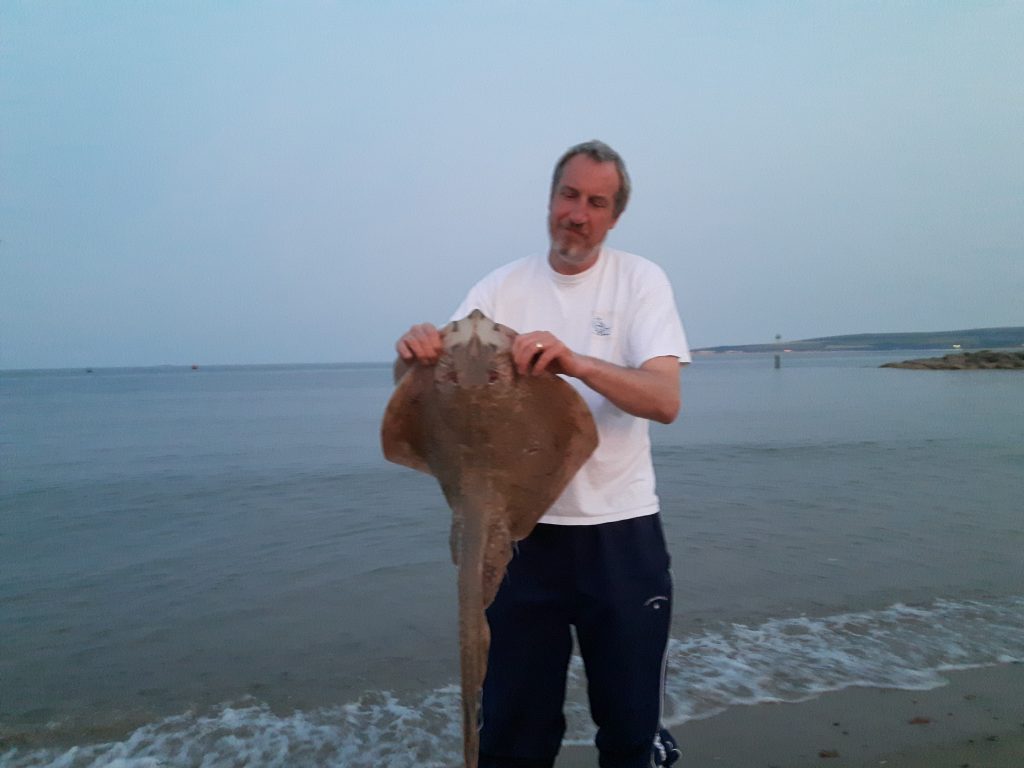 After a few snaps the pregnant female was carefully released. We got chatting and I learnt he caught it on a running ledger baited with small frozen Sandeels, I congratulated him and went back to my smoothound fishing.

Minutes later Cliff came up the beach and offered me a bag of Sandeels. What a star! Out went Sandeel on a pulley rigs on my second rod. and within seconds I had a screaming take. I wound fast and swept the rod to set the hook. only a little resistance and a few light lunges told me it was a small ray. At a couple of pounds it was a carbon copy Cliff’s double earlier, just in a smaller version. 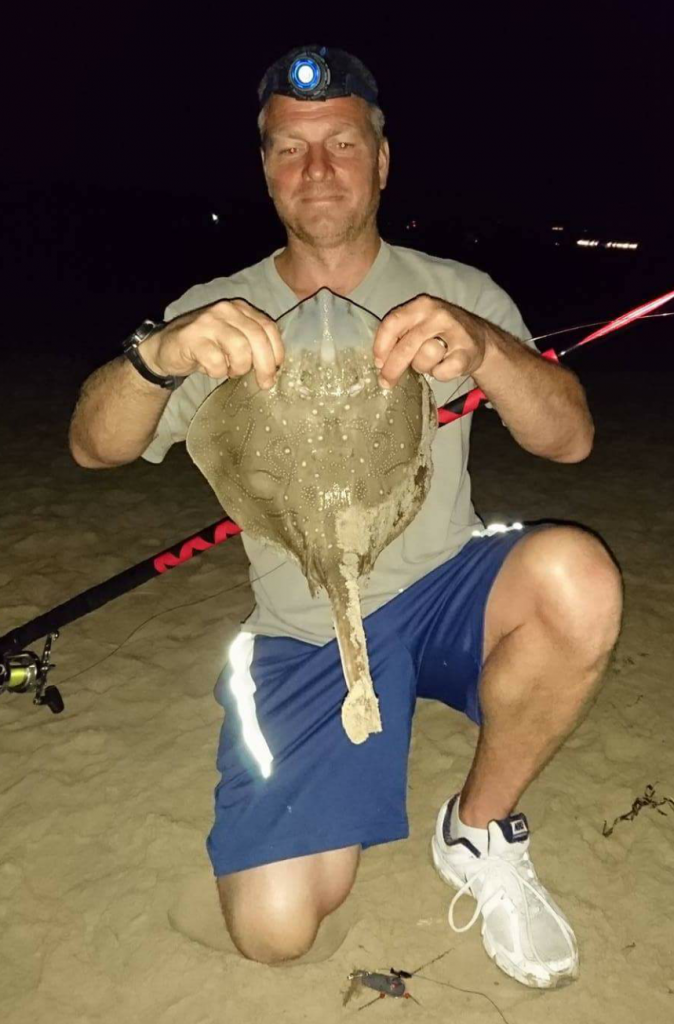 An hour later later I helped Cliff land and release a slightly smaller undulate around 8lbs. 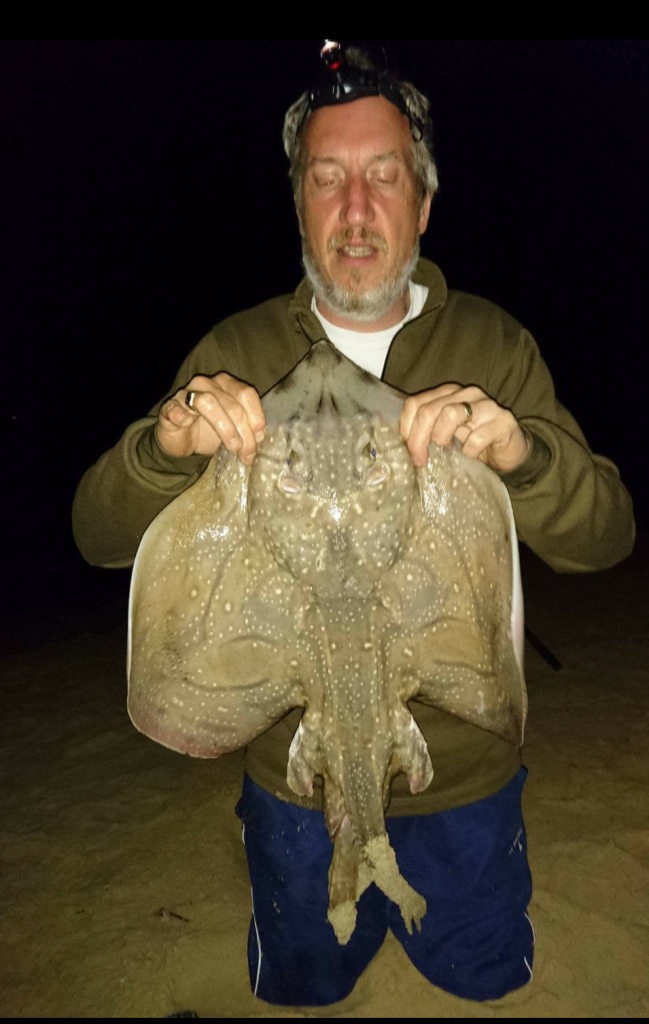 Walking back to my rods,I saw on the ray rod the line was bellied into the water, a classic slack line bite!
Cursing myself for not paying more attention I wound in the slack and line taught I leaned back and felt the solid thump of a ray at the other end. fish on, another undulate! At this point my phone died, so it back up the beach again for to Cliff to do the honors with his camera. Legend! 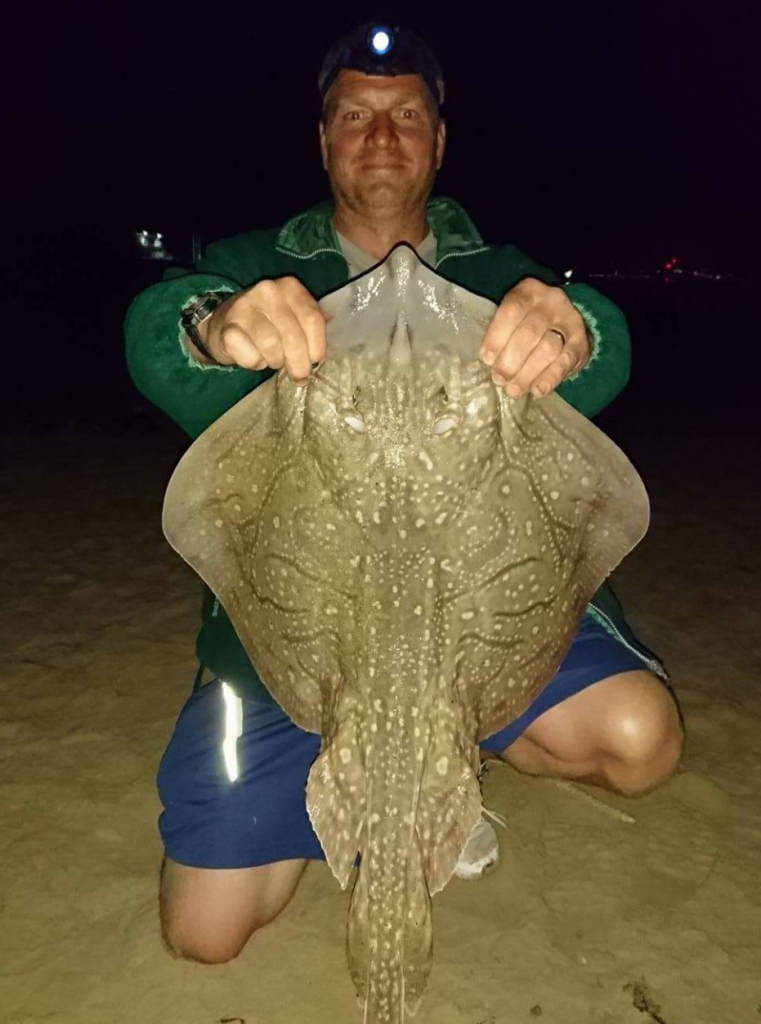 By this time it was getting on for midnight and it was getting too cool for shorts. As I packed up ,Cliff shouted over, he was into another near double undulate. What a night a couple of hours fishing with five undulates in the bag. Incidentally between us we never even saw a smoothound!
After the success of Tuesday. I decided to have another go Saturday night. Conditions were going to be very different as I would be fishing the outgoing ebbing tide to low water around 10pm. With plenty of tidal movement I was confident I might get a smoothound on peeler but I wasn’t sure about the ray?

After a couple of hours it got quite breezy and I was beginning regret wearing shorts. I had a fleece on, but shorts were probably the wrong choice for the conditions. The breeze was also bouncing the rod tips around which was making bite detection difficult. Watching carefully I noticed a slightly out of synch flutter on the ray rod, I picked  it up the rod and slowly leant back. The rod bent over as a ray picked up the bait and slowly swam uptide.

After a few hairy moments with weed jammed in the leader knot I beached another undulate around 8lb. 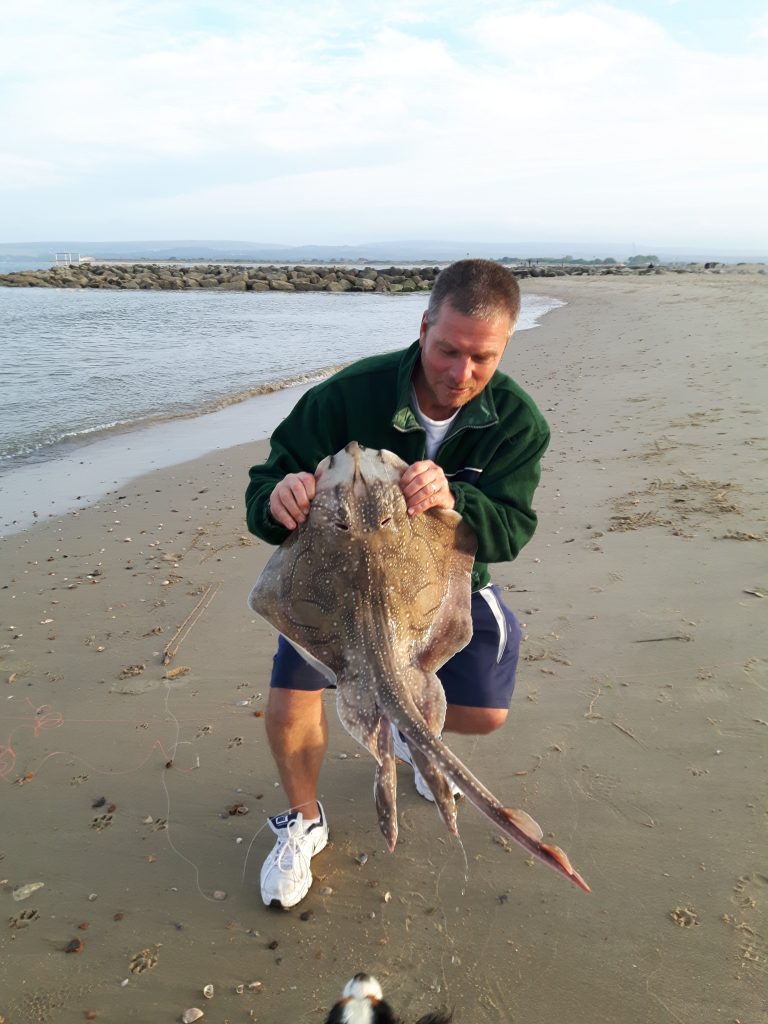 Ten minutes later. I had the smoothound I had originally set out to catch on Tuesday. It was only a pup but welcome nevertheless.

Over the weekend and all of last week I have heard of undulates being caught all up and down the south coast and in good numbers. I feel that this in part has been due the conservation of this species on a commercial basis. It really is starting to become evident that given the chance these fish are benefitting from the commercial fishing ban on them and long may it continue.

Recently I received an email from Shane Munford who is also benefitting from the undulate success story. Fishing several marks along Southbourne beach he has caught small eyed ray to 4lb 8oz and several undulates to 13lb 8oz. 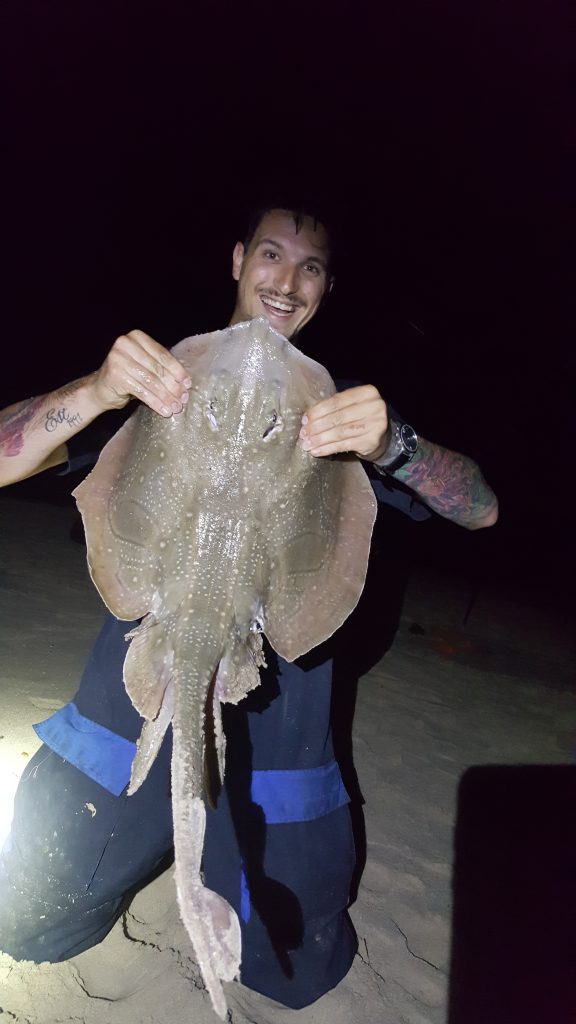 He also has set himself a task of species hunting. Something I have not tried myself!
Using different methods to target specific fish. Saturday he was using worm baited small sabaki feathers to target weaver fish. With a little persistence he caught this spiny critter.

They don’t have to be monsters as long as it’s the species you’ve set out to catch. . Well done Shane!

Needless to say all the marks from the Purbecks to Hurst castle are all in full summer swing. As well as the rays and smoothound, there are lots of smaller species available too as Shane proved.

With the longer summer nights I will be offering guiding trips throughout the week nights. As well as weekends day or night.
Mullet, bass, ray or smoothound or any other species. With hours tailored to suit all needs!!