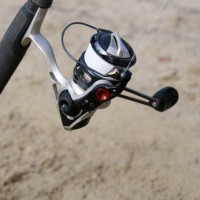 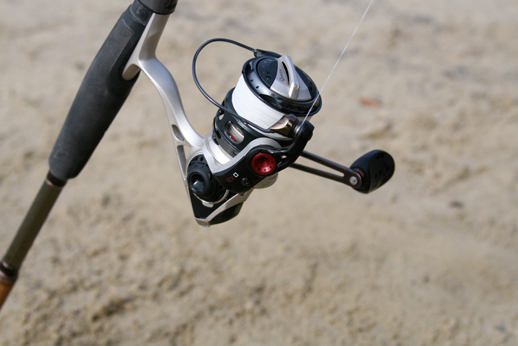 Back last November, I needed a reel to replace my worn Shimano Technium 4000. I also wanted something a bit smaller as I didn’t think that I needed a 4000 sized reel for the type of lure fishing I was doing in the UK. Mike Fulmer  at my local tackle shop, Chesil Bait n Tackle, had been telling me for weeks about the new reel from Quantum, that had been released in the US and was heading our way. Having seen the spec on it, I decided to wait and have a proper look and feel of it.

Because I fish most days, and sometimes I am lucky enough to fish all day I needed a reel that was very light. My other major requirements from a reel are a smooth drag, and a gearing system that won’t seize up after a few months hard work.

When it eventually arrived in mid November, he called me up to say it was in, I couldn’t get round to the shop fast enough. When I set eyes on it I started to drool. It set all my tackle tart alarms off at once. To be honest the pictures that I have taken and the ones in the catalogue do not do justice to this beauty of a reel. Quantum call it an exoskeletal hybrid construction. I call it formula one sleekness, with a hint of bling. 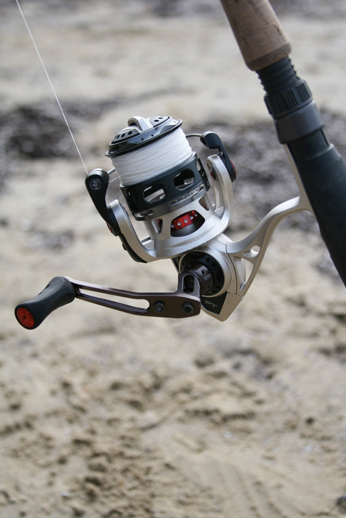 What really appealed to me with this reel is the weight. Because of its cut down construction, it weighs a mere 200g for the 25 size that I opted for, and only a few more grams for the 30 size. The frame is made up of a combination of lightweight composite material, and for the load bearing parts a ultra rigid aluminium alloy. Despite cutting out non load bearing areas where ever it has been practical, Quantum claim that the frame is six times stronger than a graphite composite frame, much favoured by Shimano in their high end reels.

The only difference that I can see between the 30 and 25 size reels is the size of the spool with the 30 having a capacity of 200m of 15lb braid and the 25 having a slightly smaller capacity of 170m of 15lb braid. Gear ratios are the same at 5.2:1, which is more then adequate for almost all types of lure fishing.

Enough of the technical stuff, how does the reel perform in action: In a nutshell fantastically! Its size and weight, gives my 9ft rod a great balance, allowing me to cast all day long without fatigue. When you consider that I once worked out that during an average 8 hour session I retrieve over 14 miles of line, that’s pretty impressive. So far the reel has shown no sign of wear apart from a small annoying squeak from the handle, that was soon taken care of with a quick wash and a spray of WD 40. I have to be honest and say that I really do not look after my gear very well at all. I think I may have only washed the reel once in the 5 months I have had it. During that time it has been totally submersed on several occasions, including lying in the mucky bilge water on my mates boat.

As for Performance under load, it has been faultless. According to my diary, since November, I have landed over 300 Pollock 80 Bass, numerous Mackerel and Garfish and a few crash diving Wrasse. Each time the clutch has performed smoothly with no sudden jerks, allowing line to be stripped as needed to cushion the impact of a fast running fish, or the smash of the surf.

Like every product nothing is perfect, the few points I can raise are that the clutch lacks the micro adjustment that I love on a Shimano. It does not come with a spare spool as standard. The other point, and I have to say it is not a point that bothers me, is there is no reverse mechanism, so for those who like to play a fish by back winding this facility is not there. I have never played a fish like that and I actually prefer there to be no backwind on the reel. 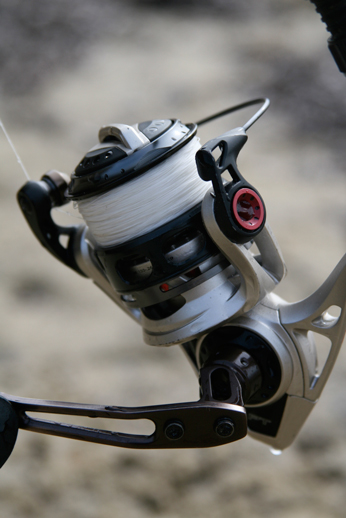 Close up of the EXO

This reel is an out and out lure fisherman’s tool. Fantastic to use for hours even in the harshest saltwater environment and powerful enough to tame anything that swims around the UK waters. It is priced at just under £200, so it wont fit into everyone’s budget, but if you are looking for a high end reel then the Quantum EXO Pti has to be a contender.