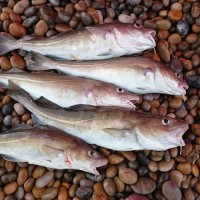 One of the best day’s fishing on Chesil ever

Yesterday was without a doubt one of my best days of fishing on Chesil, if not the best day. What made it even better was I was guiding, so I was able to share a great day with my client. We both went home buzzing, it was one of those days that you remember for a long time. The final tally was 32 Codling. 1 Bass. 1 Whiting, 1 Pollock and even a Plaice that took two 5/0 hooks with 5 lugworm.

I have had a lot of anglers ask me if I think it will fish as well today and tomorrow, in truth I think it will still fish well, but not anywhere near as good as it was yesterday. The sea is a lot calmer this morning and with light winds it will only become even flatter, especially tomorrow. However the water is still coloured and that will take a few days to clear up. Having said that I was amazed at the shear number of Codling that there was. On Several casts  I brought back two Codling on the Pennel rig. 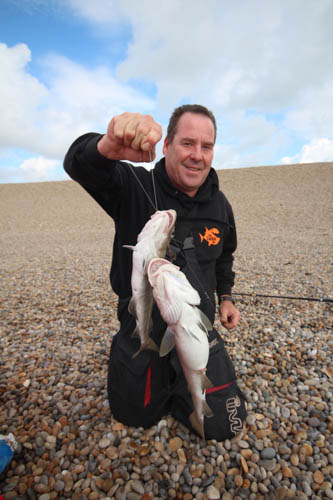 I had a good selection of baits with me, but I found that a large Lugworm bait worked better than everything else for us, even better than Peeler Crab. I was using a Pulley Pennel Rig and putting 4 or 5 worm on each cast. A couple of mates that fished along from me did well on Squid, and my mate Paul Black managed 5 Codling on his last Peeler Crab. 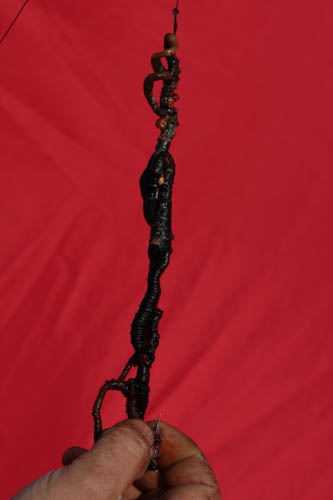 Here is a quick video of my client landing a Codling

I have had a look at the forecast for the rest of the week and there are a number of days that look like they may produce some very good results, so I will be cancelling my break that I had planned, and will open up the days for guiding sessions.

Chesil Beach forecast: It goes without saying that Cod will feature highly on the target list for CHesil this weekend. However I would be surprised if some large Conger were not caught, especially today. They often come out of their lairs after a storm. One potential problem today will be Dogfish and Pout. I didn’t see a single one yesterday, but I guarantee the sea will be alive with them today.

When the water clears I expect the Bream will still be around and hopefully they will be hungry.

Portland: Conditions are good for Bass and Bull Huss, but the Wrasse do not like these conditions. Pollock are often put of with coloured water, but I would still expect to see some caught, especially at marks on the East side such as Church Ope Cove.

Portland Harbour: The Harbour is fishing well at the moment, espccially for Bass. One of my mates had several Gilthead Bream near Ferrybridge, as well as a couple of Flounder.