Fishing Tails > All Articles > Reports > Chesil Beach > This is why I love fishing so much.
The last Cod session of winter; live updates from the beach. Final Flounder trip of this season (maybe) 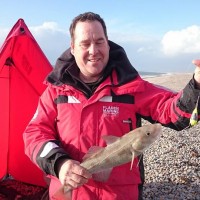 This is why I love fishing so much. 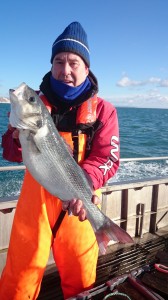 The past few days have been perfect examples of why I love fishing so much. On Friday I managed 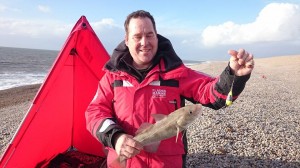 to land my 300th Codling of the winter season. Then yesterday, I was out on the boat and managed to land an 8lb Bass on a lure on the second drift. I am sure I would have had a few more, but we had engine problems and had to limp back home. All in all a fantastic start to the year.

I have to admit that I was beginning to think I would never get the 300th Cod, as I had been after it for a few weeks now. The first 70 were easier to catch than the last two.

It is not just about the fishing, as I spent both of my sessions this weekend with some great people. On Friday I was lucky enough to be joined with my professional photographer friend Gavin Parson’s, who wrote the photography articles for the site last year. He is working on a lot more video stuff this year, and has been helping me with some new videos. One of which I hope to get out this week. As a taster of some of the videos that I will be releasing in the next few months, enjoy this short intro video. If you like it and don’t want to miss any new ones we bring out, then make sure you subscribe to my Youtube channel.

Yesterday I was joined by Dan Konig, who runs an outfit called Adventure Angler. Dan is an Australian, and is one of the few people that I know that are even more passionate about fishing than I am. Part of his business focusses around Jig fishing, and he was keen to prove to me that Jig fishing would be as great for Bass fishing as it has been for him on Cod and Pollock. Unfortunately due to those mechanical problems we had on the boat, he was unable to show me how good jigging with lures was. However I was so impressed with the look of the technique and the stunning super light tackle he used, I managed to persuade him to leave the rod and reel with me, to allow me to test them out during this week.

Chesil Beach forecast: Now that the water has cleared and become calm I wouldn’t expect to see many Codling until next season now. I don’t think that the daylight fishing is going to be great for quite a few weeks. We will start to see Rockling feature in most catches, with the odd Dab. Night tides will produce plenty of Whiting, Dogfish and Pout.

Portland: Expect to see some Pollock from all the rock marks, especially the BIll. Wrasse will be happy to take crab and ragworm baits. They won’t be plentiful, but they should be large.

SUBSCRIBE
The last Cod session of winter; live updates from the beach. Final Flounder trip of this season (maybe)

2 Responses to "This is why I love fishing so much."