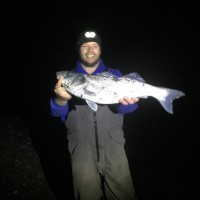 Well here we are again fishing fans, this month has flown by and what a challenging month it was! 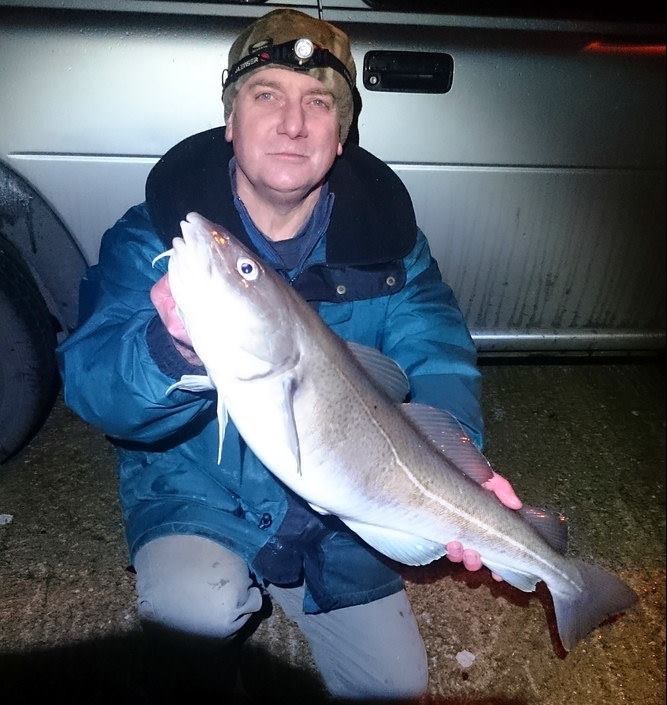 February is usually a tricky period for most anglers and the dwindling Cod pushes the club anglers further a field in search of Huss, eels and early Ray. 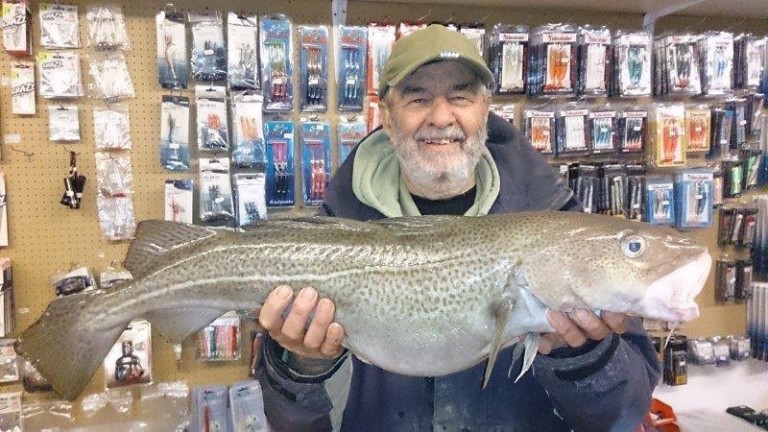 Local Angler Joe Gardner kicked off the spotted Ray fever with a gorgeous specimen on a south Hams beach followed by Edward Reilly. 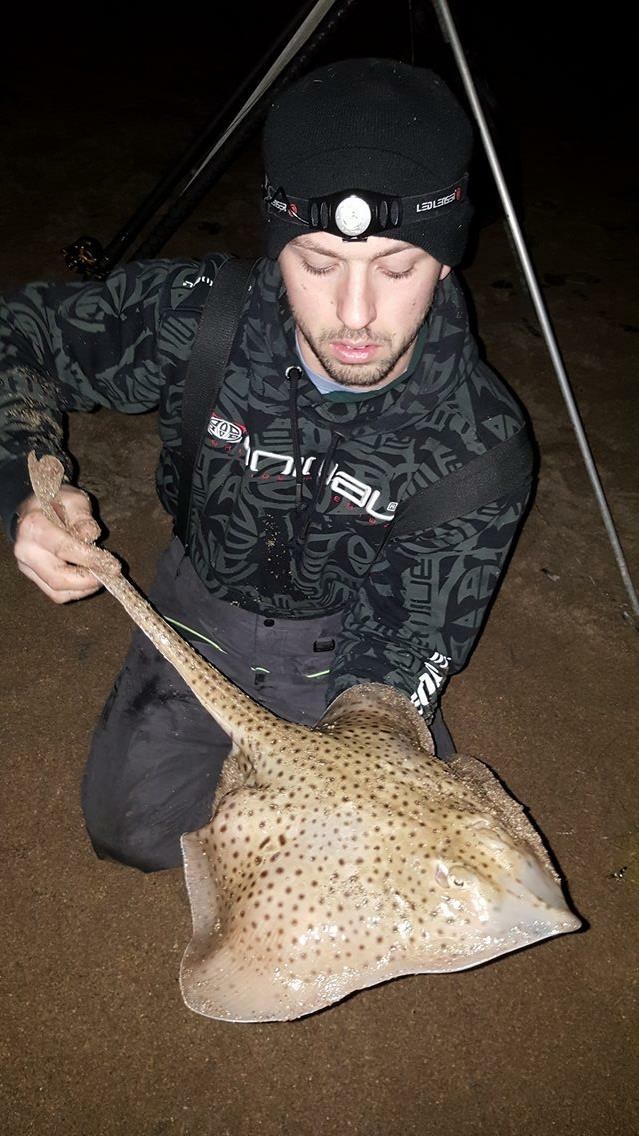 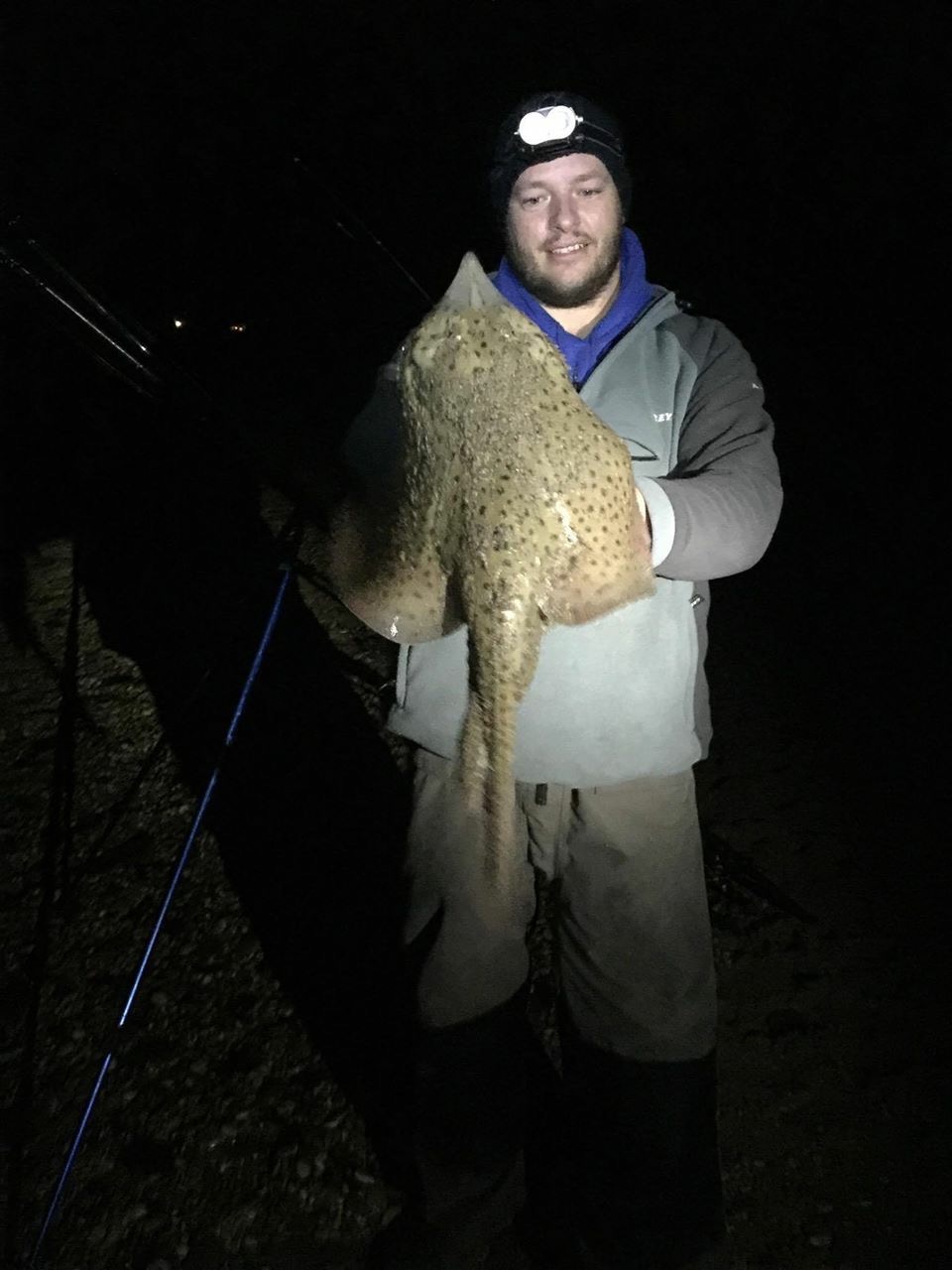 Then there was LRF angler Frankie Costello, who fancied a night on the bait and bagged a real stunner. 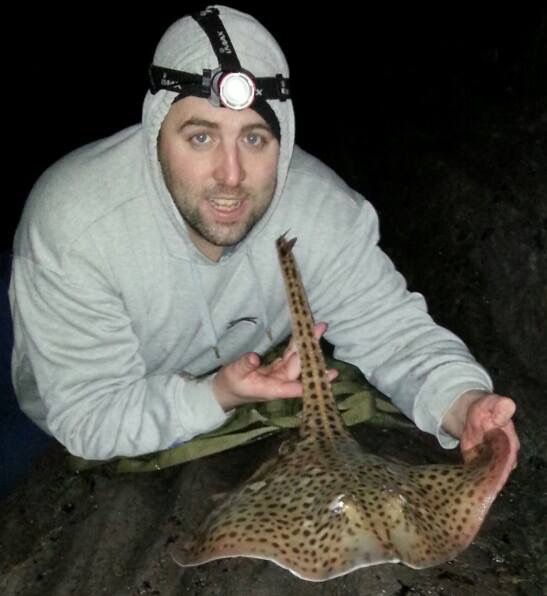 This sparked off several more spotty’s from the same mark with the odd Cod thrown in for good measure. 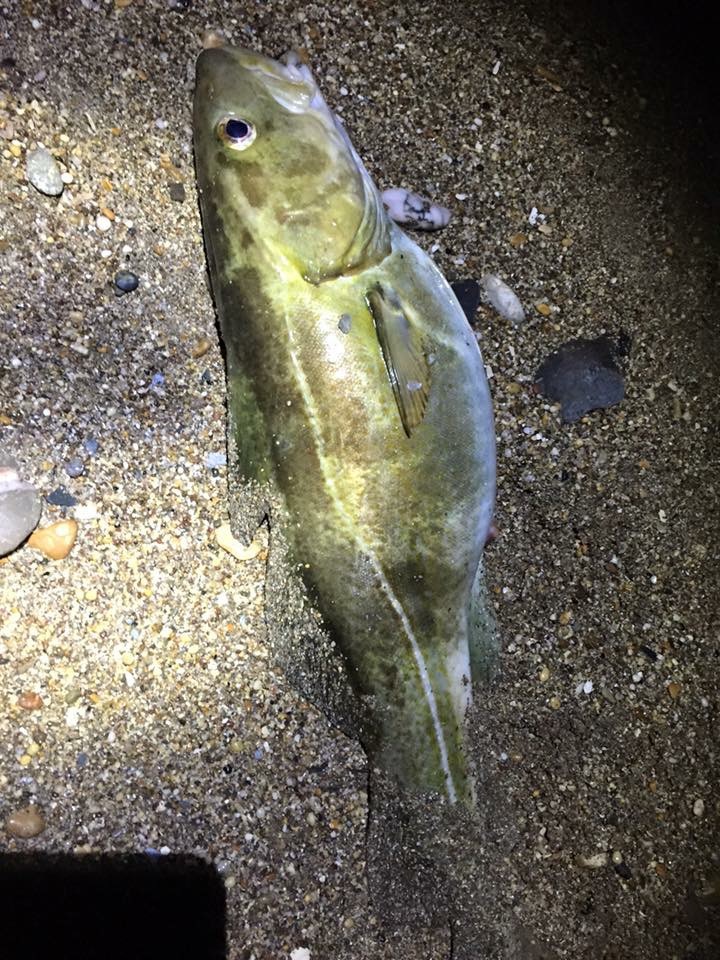 It was Carl McCormac who had the first and PB Spotty of 6lb on the nose, whilst using up his peelers in the river Tamar late into the month, and what a beauty it was.. 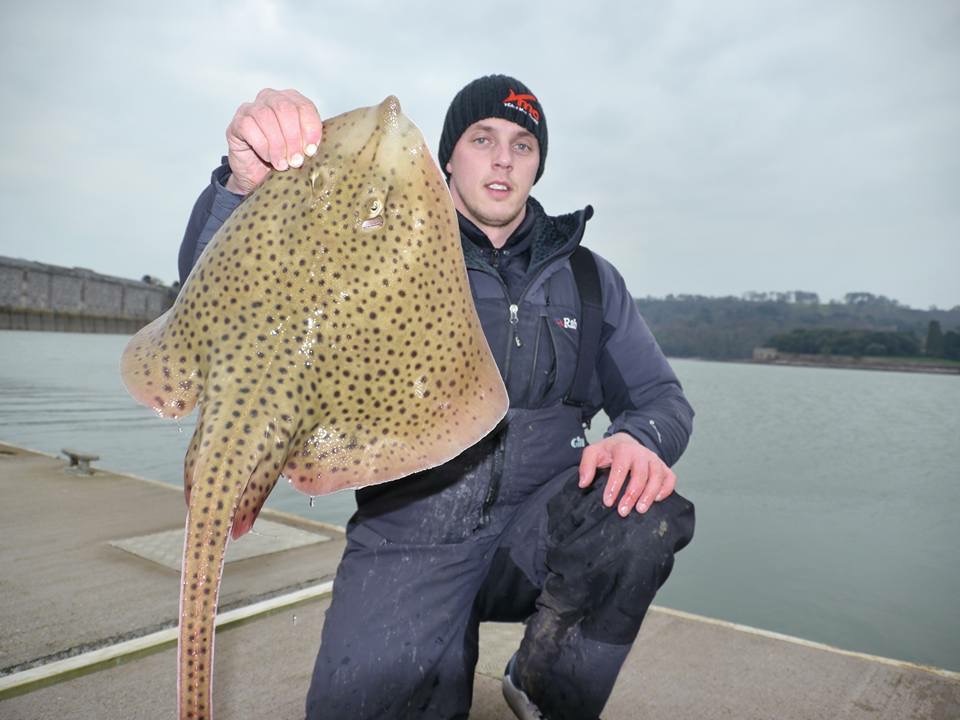 Pesky Pins and pout have been pretty predictable in the main 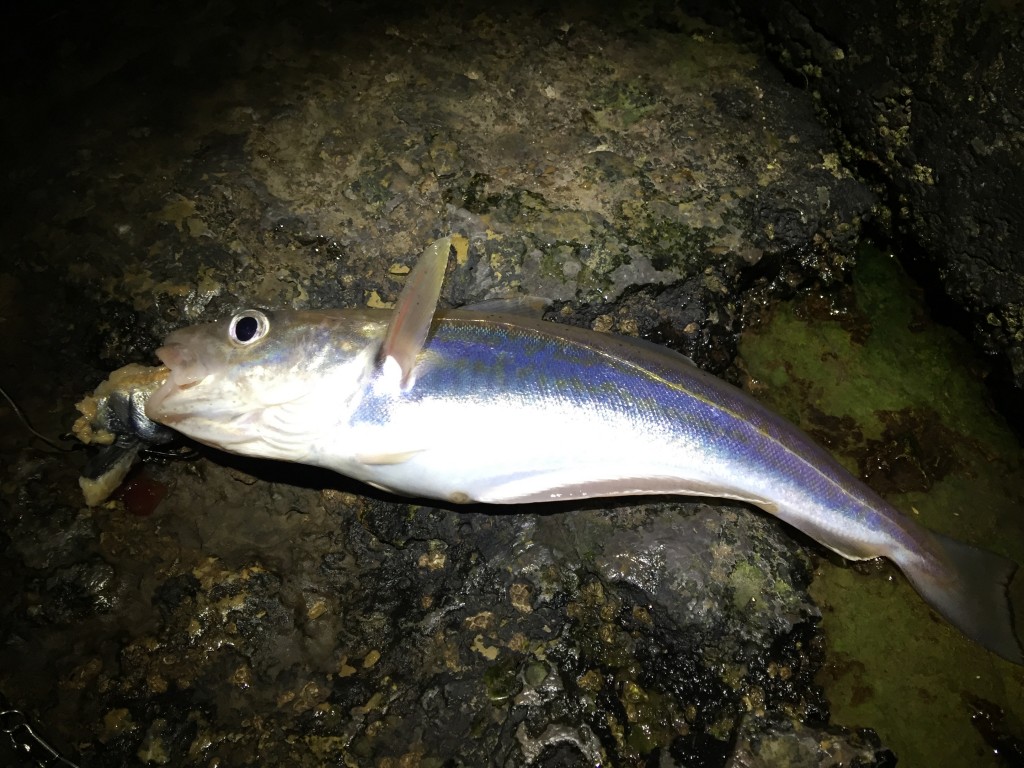 The Dogfish have been on form even taking worm baits when used as avoidance tactics!, 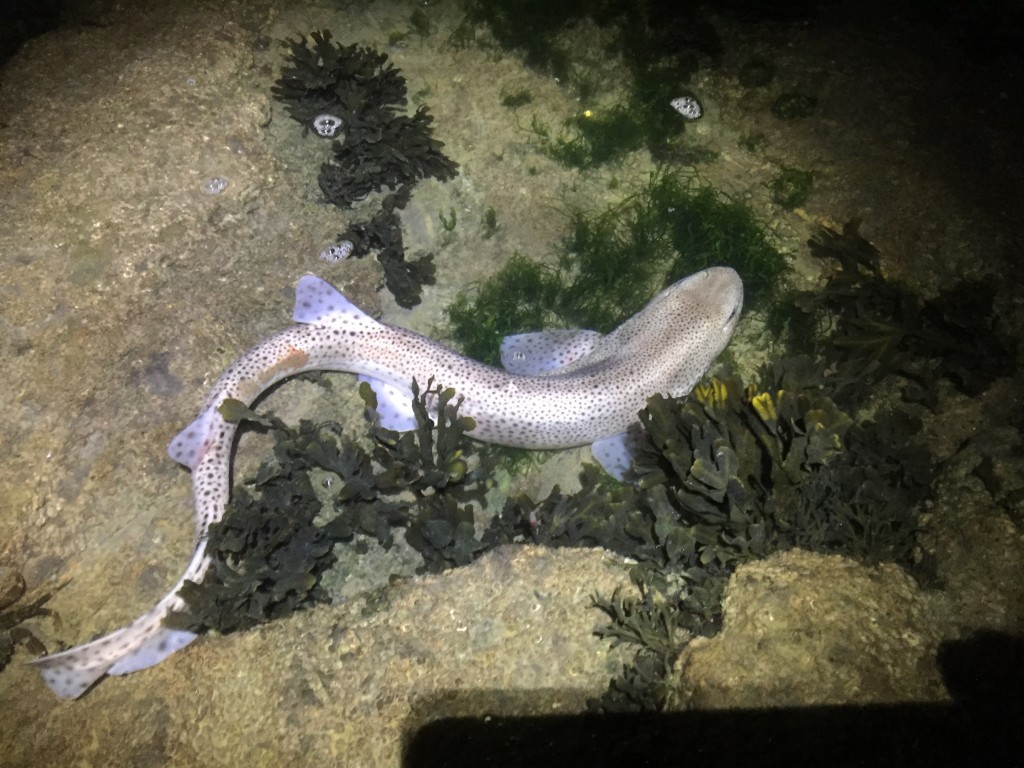 strap eels have also been unusually plentiful along with a few modest 20’s encountered whilst On the Huss hunt, Nathan Giddy with a smile on his face :)) 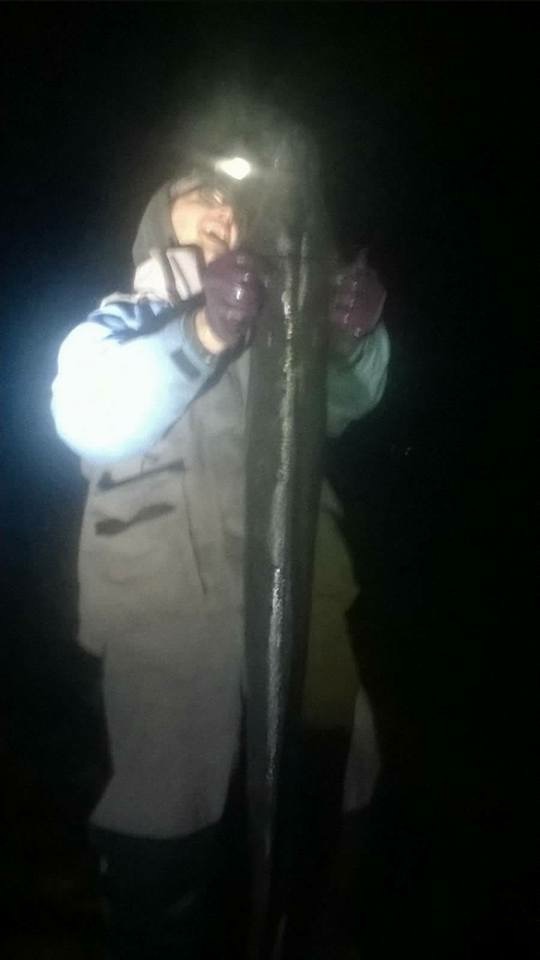 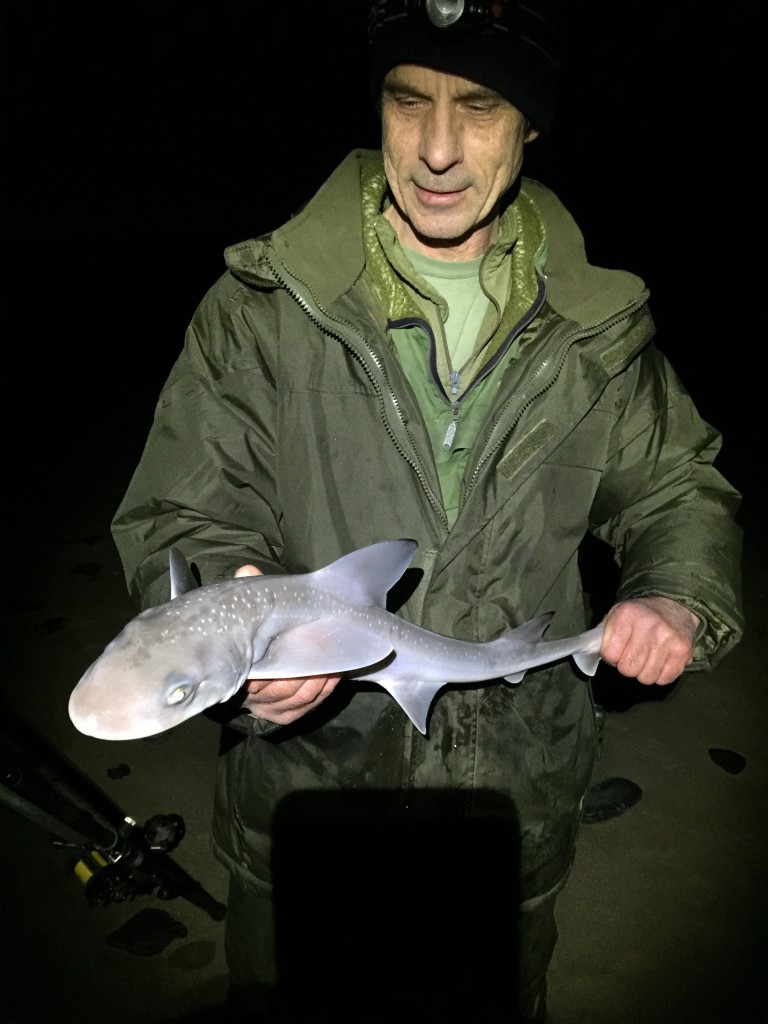 A few small eyed rays have been caught West of Plymouth over low tide up around the specimen weight falling to sand eel sections.

Staying with flatty’s the flounder continue to show with some being nailed on LRF gear in and around Sutton harbour, using lures and gulp baits, the estuaries still throwing up specimen fish, Andy Smith lured this one! 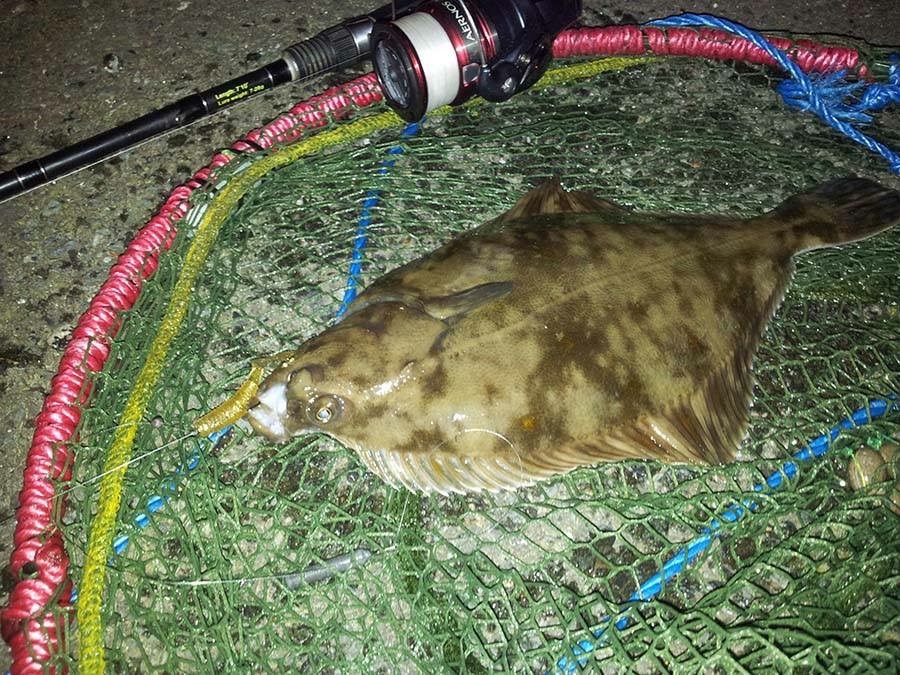 On the LRF theme, it’s been a relatively good month for the hardy drop shotters with plenty of pollock to keep the hands busy, Leon Studden with a nice wee Pollock braving the cold, these fish go well on U.L tactics… 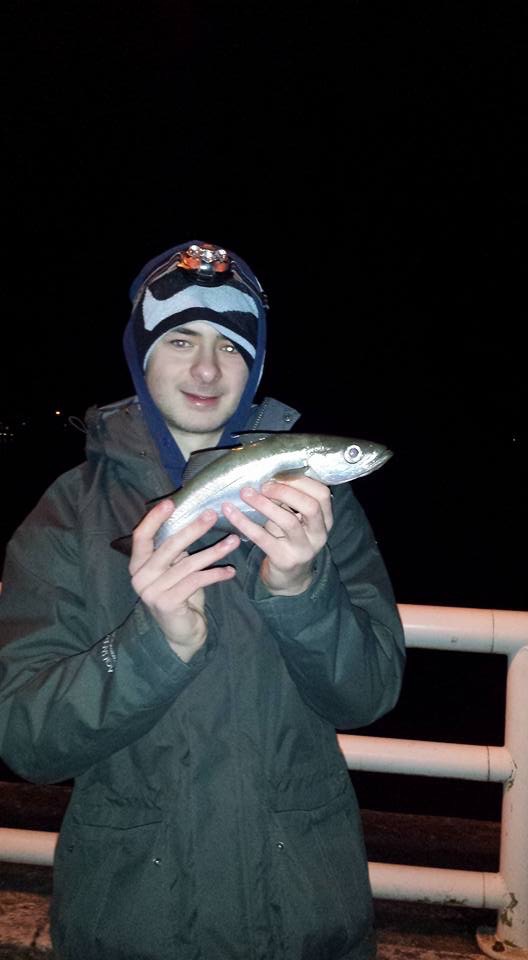 as well as a good number of Herring being nailed on the bottom with Isome worms in all colours working well, so if you haven’t tried yet, get down to Mutton Cove and catch your dinner or bait! 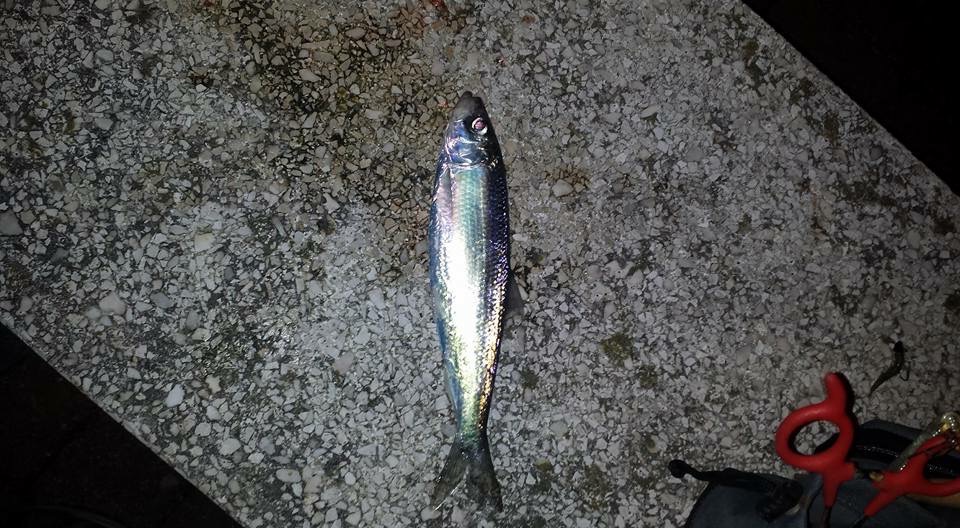 As mentioned the Cod are still about in the Tamar but I’m seeing less and less reports, the permit only Rubble Jetty has produced Cod around the double figure mark for those privileged few

Now what about the Bass situation….?, well they are definitely off the menu literally due to the pointless unfair law bestowed on us all!, in case you are unsure, ALL BASS MUST BE RETURNED TO SPAWN UNTIL JULY 1ST, After that, 1 Bass per day per angler may be kept if over the new MLS of 42cm. 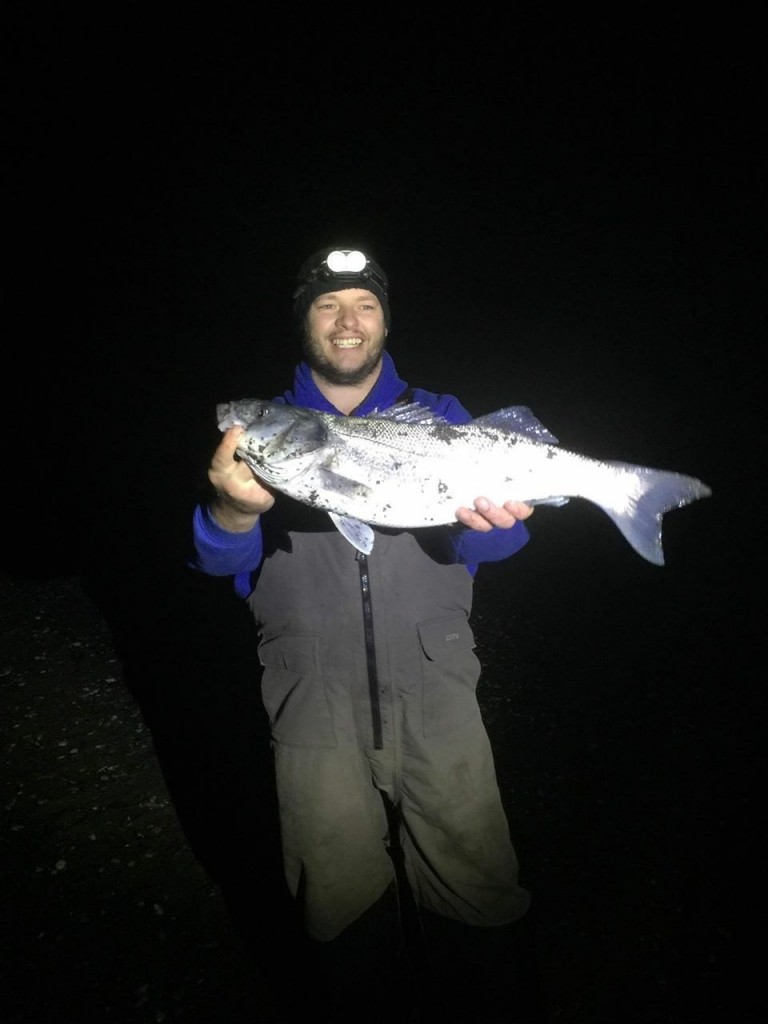 Edward Reilly picked up this beauty while Ray fishing just west of Plymouth, 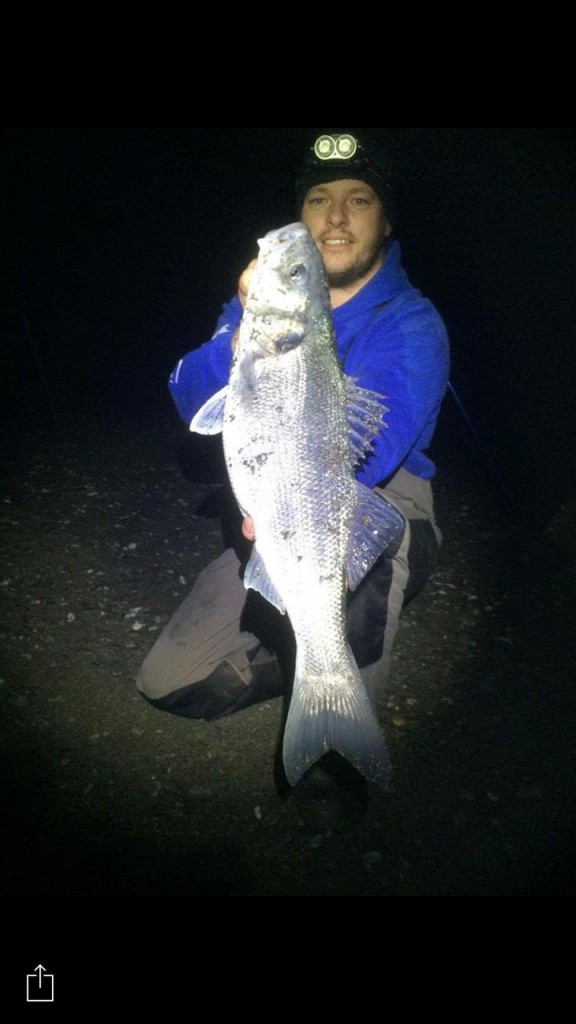 The old pesky blank saving Rockling have been gorging on our fish baits as is normal in February, 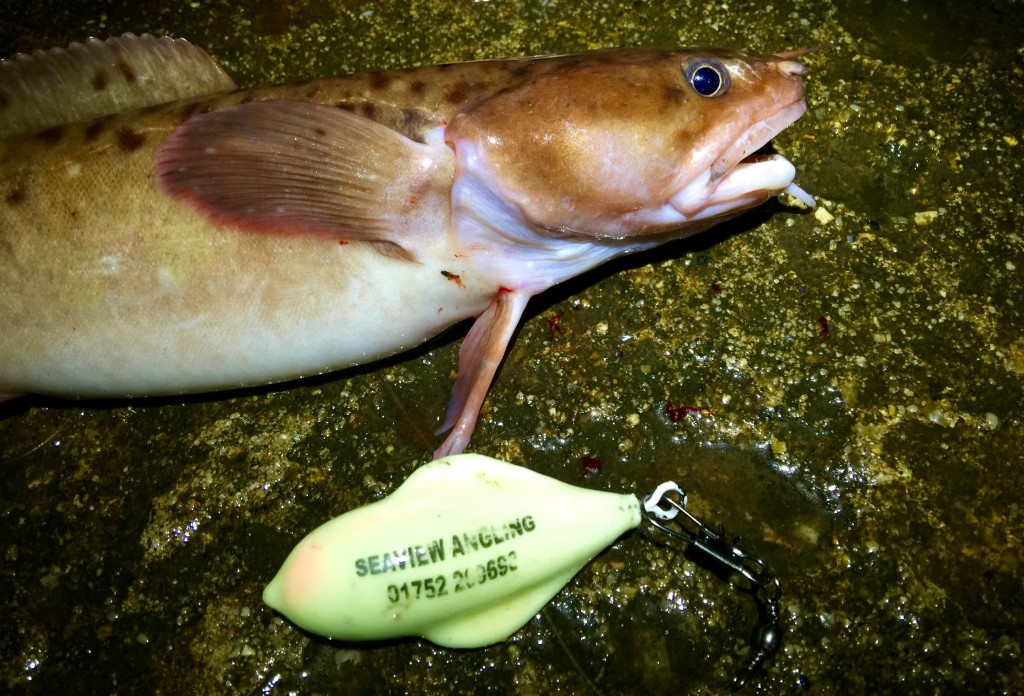 I have had a few myself on the big gear and a few have been real stunners. 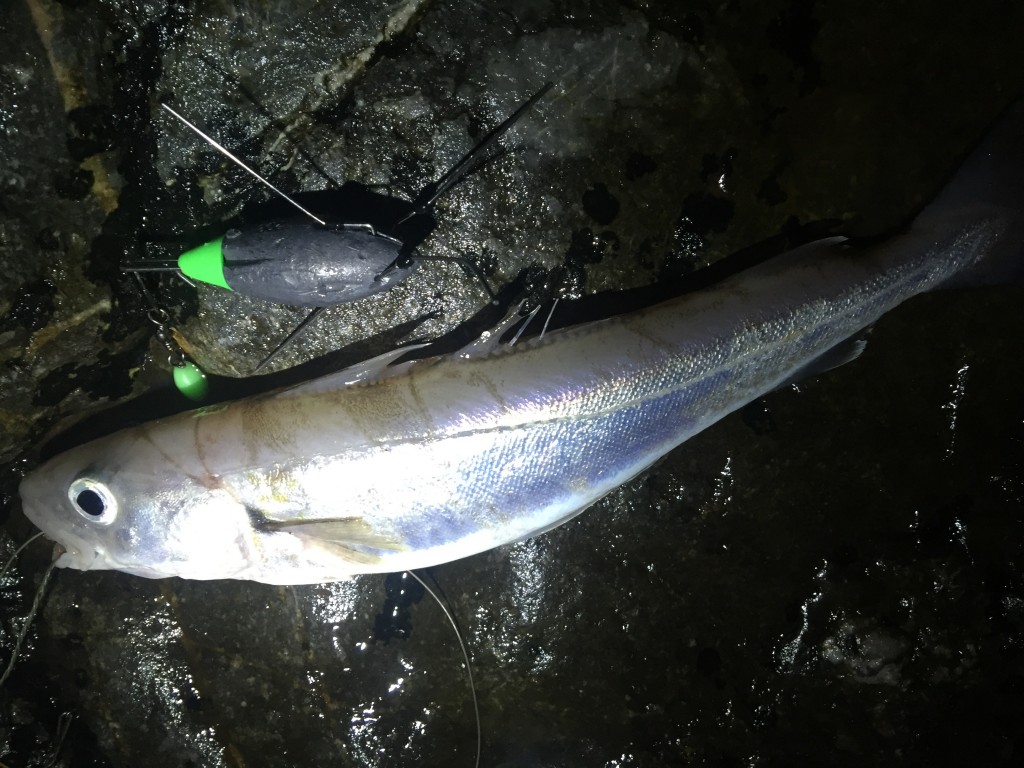 plenty of fish weighed in with the winning fish being 2lb on the nose, I managed to sneak into the prizes with a fish around the pound mark , happy days. 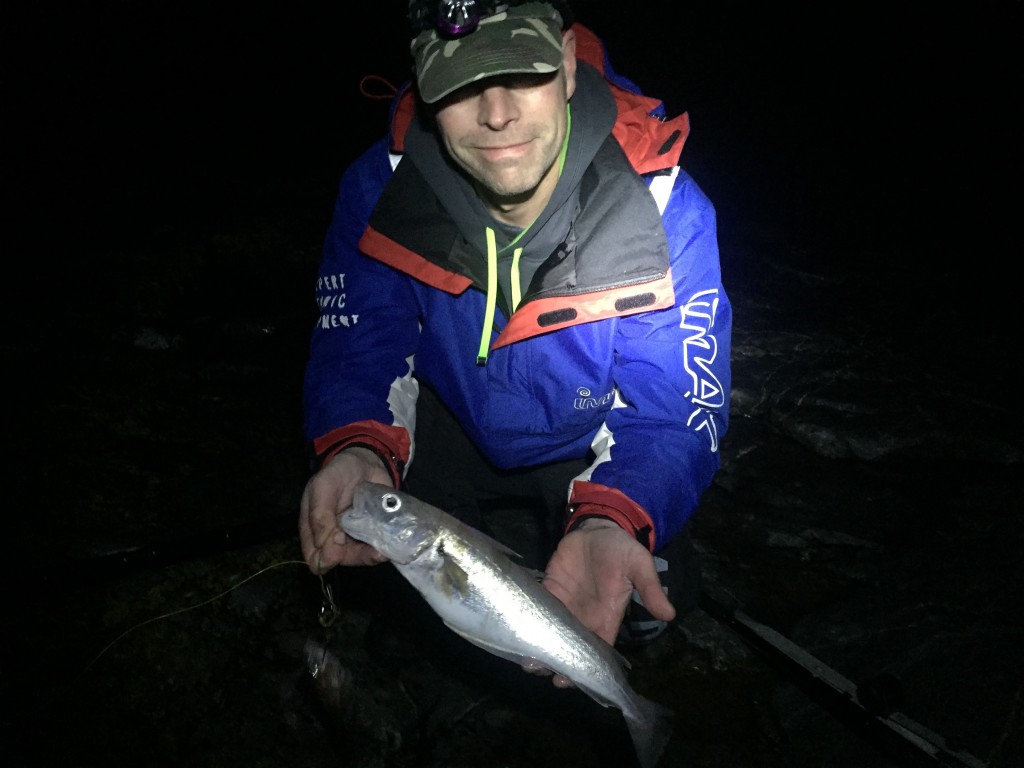 Plenty of Doggies being caught at just about every mark I’ve fished in the whiting comp which gives hope for Seaview’s month long Dogfish competition which has just started. 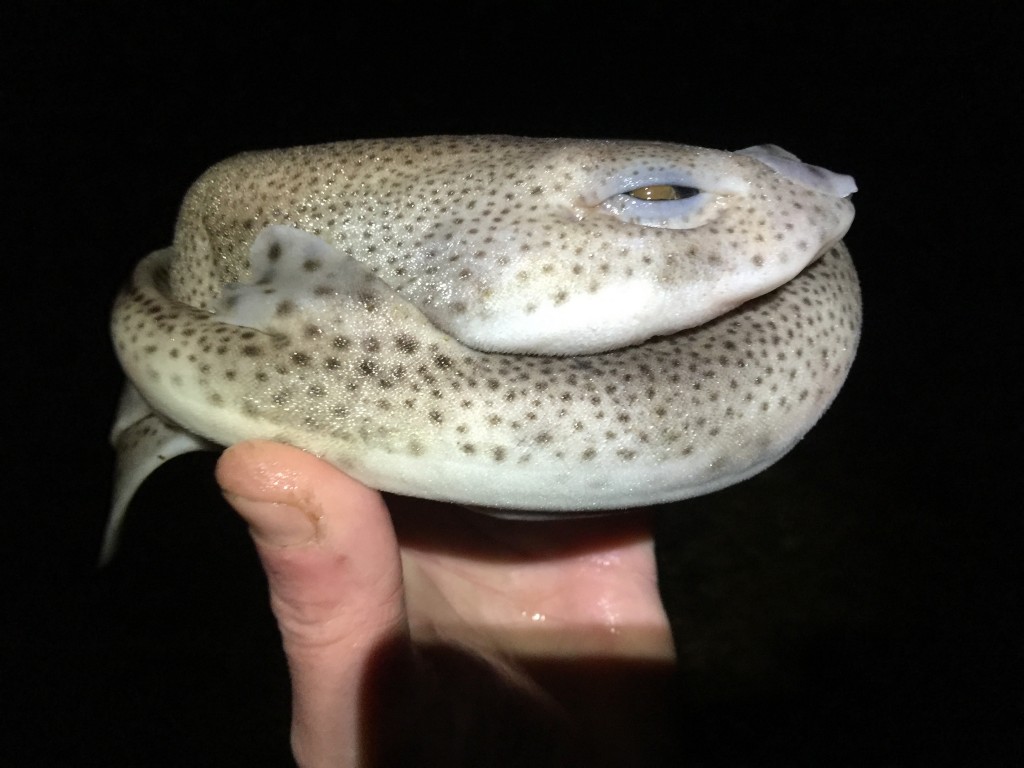 The Mullet are here but not many anglers are fishing for them, I’ve heard reports of fish to 4lb 12oz being caught but there hasn’t been any photos. 🙁 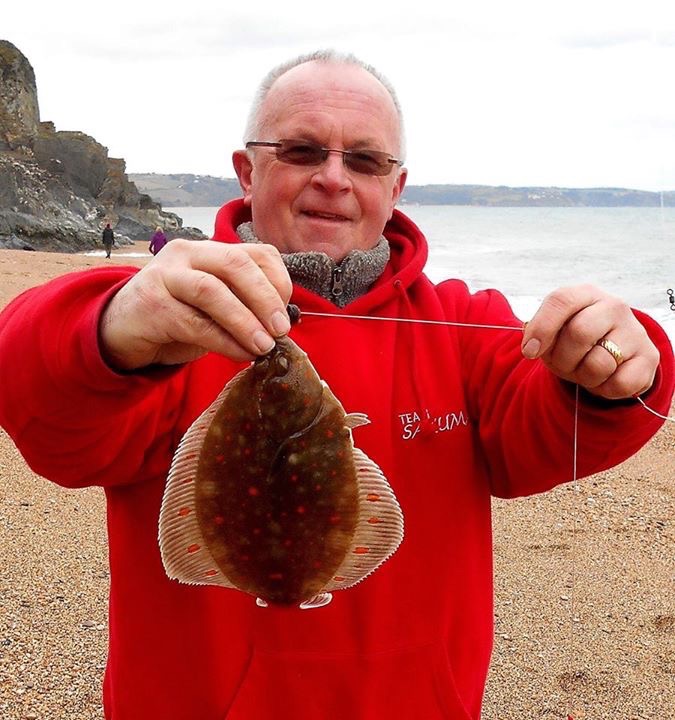 Moving on and those Mackerel munching BIG BULL HUSS have been prolific on the nights with more ground swell and plenty of doubles have been caught on rock marks close to Plymouth, fishing buddy Brett Annetts here and Carl McCormack with the spoils… 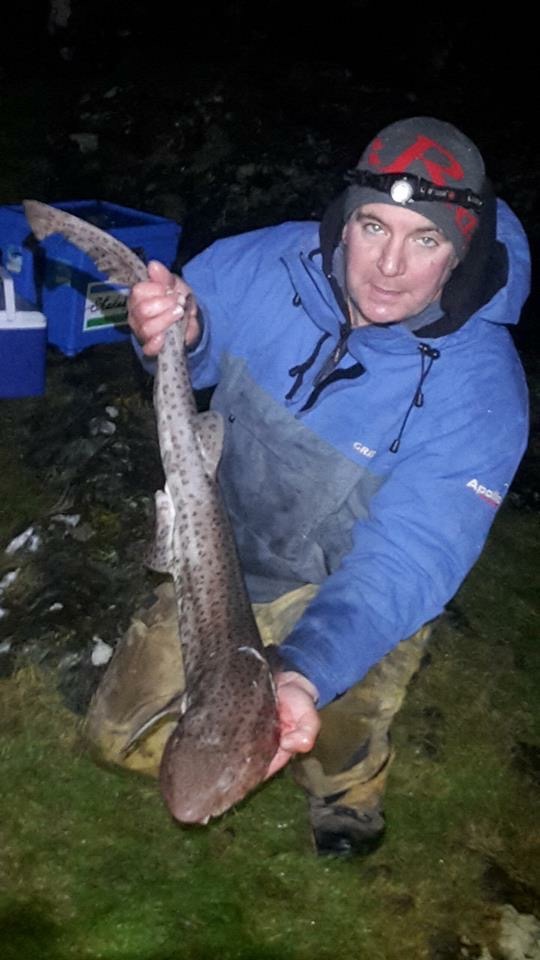 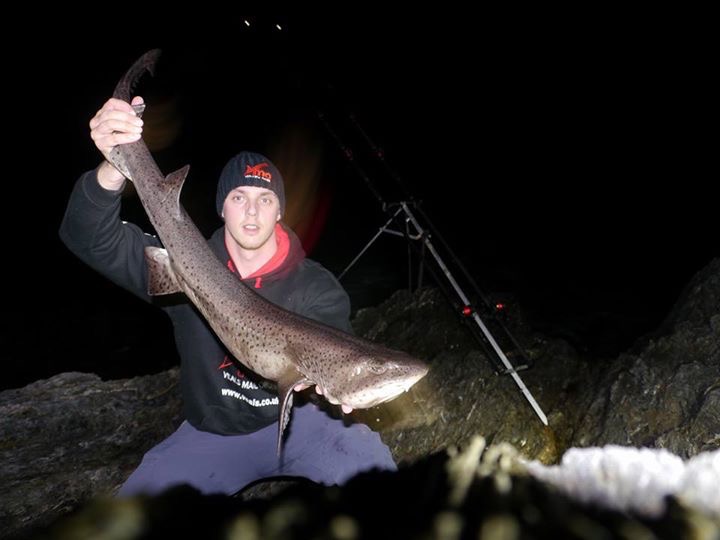 Please please be careful if you are a novice, always take a buddy with you and watch each other’s back whilst landing fish, there has been a couple of near misses with rogue waves catching out the seasoned HUSSTLER!

Looking ahead into March and I cannot wait for those big Thorny’s to appear, also the spring run of Mullet and no doubt Bass, it won’t be long before we are chasing those big blondes again!

I hope you enjoyed reading my report as much as I enjoyed writing it.