Fishing Tails > All Articles > Reports > Boat Fishing > On board Valkyrie 6 with boat angler Allan Yates
Not Tuna but a great day out. Best laid plans 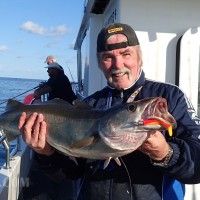 On board Valkyrie 6 with boat angler Allan Yates

Fishing out of Hayling Island many times in the past  millennium so I know the area quite well and recently this year I booked a place on the boat Valkyrie 6 with skipper and owner Glen Cairns who has many years of experience and local knowledge of the fishing grounds he frequents and is a regular visitor to the channel islands and the rich fishing grounds around Alderney.

Northney Marina is all relatively new and the facilities are top notch with great toilet facilities. you can even have a shower after angling for the day if you want to. A large HD screen delivering all the latest weather information to prepare you for the days conditions on the fishing marks, is available in the reception area. Parking is FREE so that’s a bonus and it’s secure, so when you arrive you don’t have to worry about getting a ticket and it’s not far to get to the boat at it’s mooring either with trolley’s available if required for all your gear if you take that much but best to travel light.

The boat I was booked on for a 12hr wrecking trip was the 11mtr Valkyrie 6 the older of two boats and it was skippered by Glen, Valkyrie 6 is an 11mtr South Cat powered by twin 330hp Iveco diesels.  There are 14 times comfortable suspension seats for individuals in the wheelhouse plus tables and even charging sockets for your phone if needed and an on deck toilet, fast boat too cruising at 18knots with loads of all round fishing space so with a full compliment of 10 anglers there is no need to worry about room to fish.

In the wheelhouse the latest electronics for GPS and fish finding plus all the required safety equipment, radios etc. all in all a really well thought out angling boat oh and plenty of tea and coffee or if you want to heat a pie full galley facilities and it’s warm for winter fishing.

There is also Valkyrie 7 launched in 2013, she’s an 11mtr BWSEA CAT powered by twin 200hp Nanni Diesels, cruising at 18 knots and has all the latest touch screen electronics, skipper is Zac Cairns who is Glen’s son and has been well trained by his father. I will cover this boat in a separate article as I have fished on both now.

So what was the fishing like on this first trip ? well weather was awesome as you can see from the images just like fishing on the village pond, nice comfortable ride out to the first wreck that produced some late season Pollock and I had Fish Of The Day … AGAIN !! in a lively double figure fish taken on one of my Awesome Eels. When the fishing eased off on the first wreck we had a quick move to another.

Next wreck produced more smaller pollock and bream as we anchored it and drifted back onto the wreckage with a great system organised by the skipper for the back of the boat fishing, where everyone fished in rotation and tangles were eliminated. Not that productive so onto a third wreck holding Cod and Valkyrie 7 was already there and taking fish and so were we from the first drop and a steady stream of fish with enough for all to take home before time was called for the steam back to the marina.

All in all great day and when a second trip I was offered a space for another wrecking session I jumped at and this one also a 12hr trip of which we would again drift and anchor mid channel wrecks for as the skipper said to target anything that lived on them.

It’s well known Glen always goes the extra mile to give his anglers a good day, well today that extra mile was close to 50 out of Hayling Island to find and anchor on some quality wrecks. Weather for early October as the images show was like a summers day and many ended up in shorts and T shirts, sunrise was magnificent and it shone on us all day with just a very slight breeze.

Fishing was good infact incredible ! first wreck produced Ling, congers with some of good sizes with all but a couple of small ones returned and plenty of Pollock. We anchored and drifted the wreck and a variety of baits were used including lures, as tides changed so did the fishing and time for a move to a second wreck and again we were all into some good fish including good sized Black Bream plus Cod. I managed another double figure Pollock on one of my Turbo Supercharger Eels small size in a rhubarb and custard colour.

The crew, some I had fished with before and good to meet new faces with a father and son team Alan and Alex who can only be described as competitive and the banta ! was priceless, the sweet jar was well and truly raided too thanks to Dave who also looked after the teas and coffee. Full 12hrs wrecking 1st class trip couldn’t have asked for more. Some images from the day which confirms how good it was.

Having spent time chatting to Glen I will be out on the Valkyrie boats again in the near future and more articles will be posted on various species fishing around his patch along with good images and video as he has plenty of advice to offer on his style of angling. If you would like to enjoy what he offers and some quality fishing on well laid out comfortable boats you can get in touch with Glen here via his web site : VALKYRIE CHARTERS  you can also see his diary dates and what is on offer for that day so you can target species or type of fishing that you enjoy.

Some more images shot on the second October trip on board Valkyrie 6.

SUBSCRIBE
Not Tuna but a great day out. Best laid plans