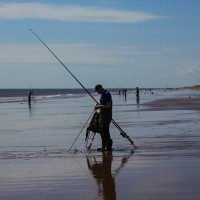 When the opportunity arises to go fishing for Smoothounds and the conditions are perfect, I get a great sense of excitement knowing it’s going to be a great day. Originally our group consisting of myself, Arran and Michael had  arranged to hit the golden sands of Skegness on the Sunday but a keen eye was kept on the weather conditions progressing that week and Saturday was without a doubt the time to try our luck to catch these remarkable species. Flat sea conditions are a must when fishing this venue. Any movement created by easterly winds that puts a bump on the sea will deter these fish. Westerly winds flatten off the sea at Skegness and will allow fish to move into feed at close casting distance.

Skegness is a seaside town located on the Lincolnshire coast of the North Sea, 43 miles east of the city of Lincoln. With so much sandy beach to choose from, it can be quite daunting for the visiting angler, but I knew from previous experience that Chapel Saint Leonards, produces some good fish at the early part of the season.  The 190 mile drive down from Sunderland was estimated to take us around  3 1/2 hours but we made good time arriving on the beach to set up at around 10 am. 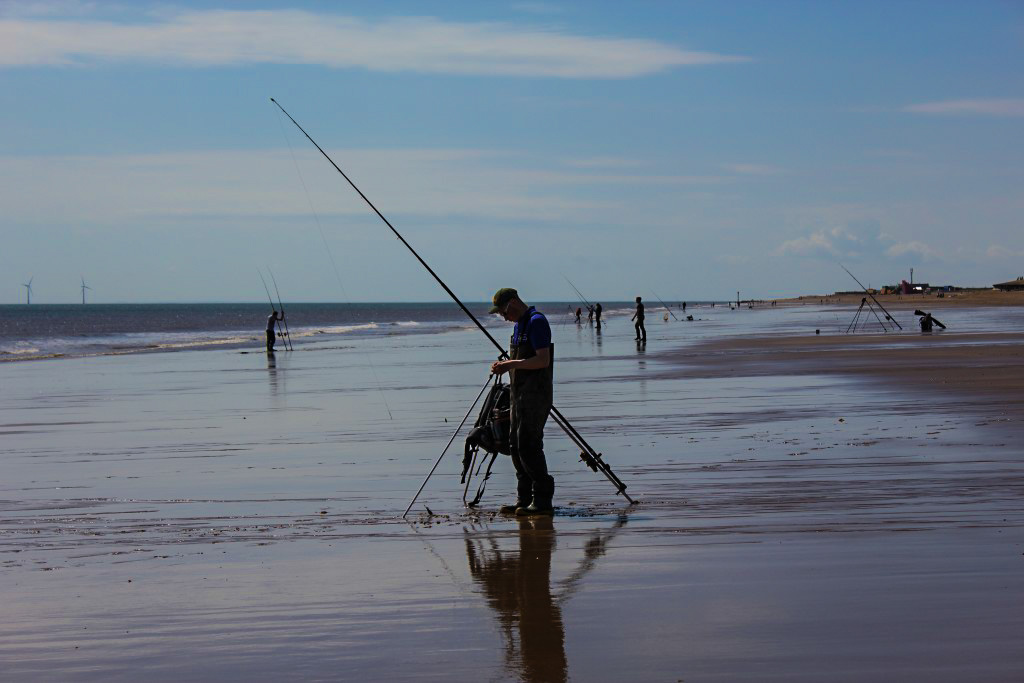 Fishing for Smoothound from the shore is the nearest you can get to big game fishing in this country and can be just as exciting.  These are probably the only fish you can realistically expect to catch from the shore where leaving your rod unattended could mean your tackle disappears into the sea never to be seen again!

The common smooth hound (Mustelus mustelus) is a member of the shark family, its upper body is pale brown, going to off white on the underside.  Smooth hounds feed mainly at night,their crushing bony plates are specially adapted for its diet of crustaceans (hermit crabs, shore and edible crabs) on the sea floor. Most commonly found in coastal shallow waters. 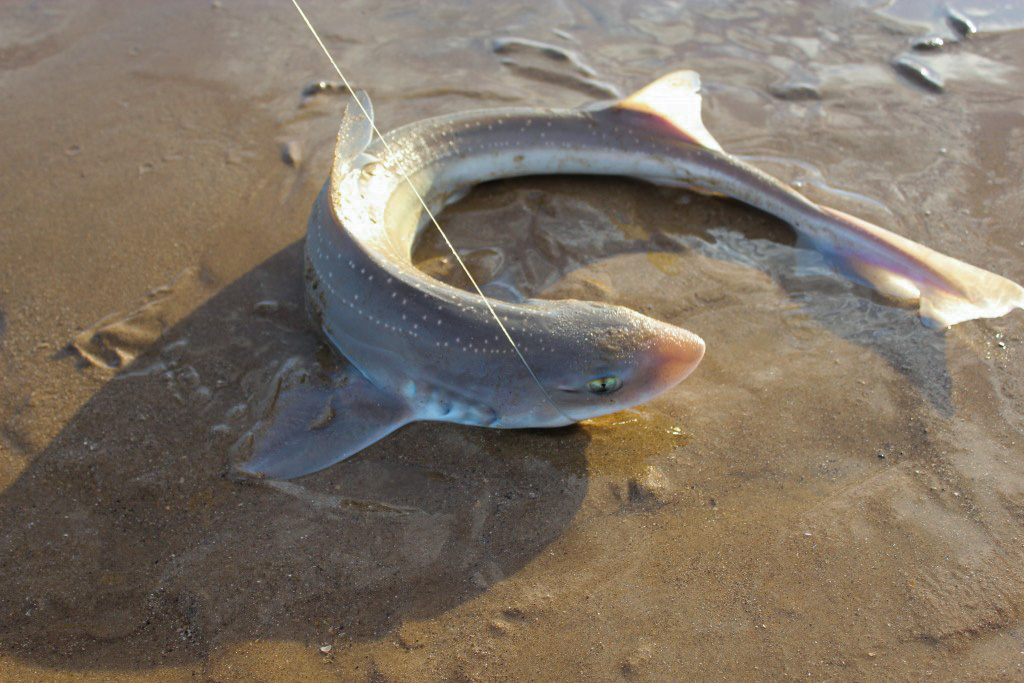 We opted to fish the flooding tide with fishing being at its peak 2 hours either side of high water.  Fish were landed from the off, I managed a nice pup at 6lb, but we were after much bigger than that. Peeler crab and unwashed squid was the choice of bait and is a true favorite of the fish we intended on catching.

Arran Stead from Sunderland tends to use a fixed spool reel loaded with braid to add to his casting distance when fishing for hounds.  Arran said “The extra distance achieved with braid can certainly give you an advantage and get you among the feeding fish”. Arran used a Up and Over pennel rig tied with a 3/0 Sakuma Chinu and a 2/0 Sakuma Manta Extra to land this beautiful Smoothy of 10lb 8oz. 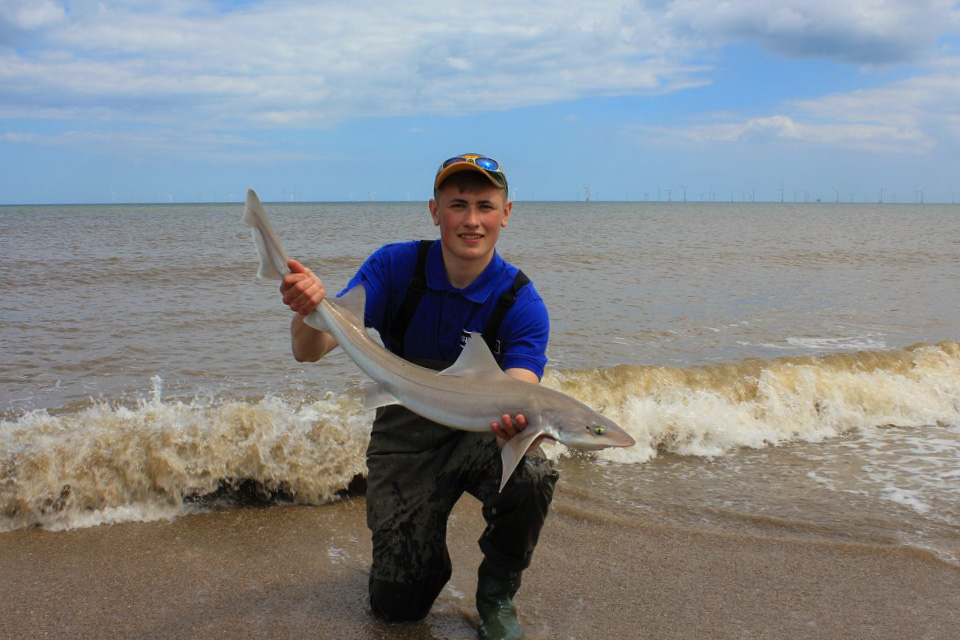 Lots of fish were feeding.  The weather was beautiful with light westerly winds and temperatures peaking 27 ºC.  The sound of  screaming ratchets was music to our ears.  As most anglers know it is best to  pre-bait a second rig when the fish are feeding this way.  We struggled to keep up with the feeding frenzy.  There were plenty of smaller hounds feeding close in to shore. Michael Atchison also from Sunderland decided to fish two rods.  His second rod kept him busy with hounds falling to around the 4lb mark. Michael used a Drop Down rig tied with a 2/0 Sakuma 540 Manta to land this fish. 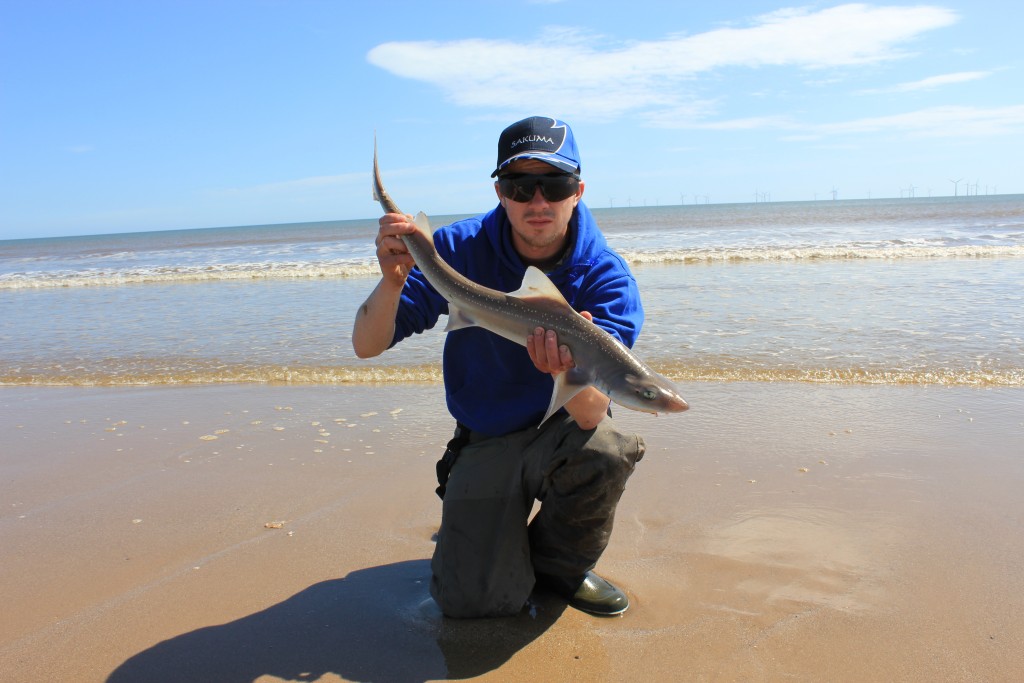 Michel is new to sea angling and is still learning.  His previous personal best from the shore was a 3lb codling.  I don’t think its sunk in yet, but what was about to happen to him was a priceless moment for him and for us all.  On the rod he was using for distance, he decided to load a juicy crab bait tipped with squid which was set upon an Up and Over rig tied with a 2/0 Sakuma 540 Manta.  Michael cast his bait out at around 80 yards.  As soon as the bait hit the water the fish took and began to strip line off his reel.  Michael took control of his rod and struck into the fish.  After a grueling 10 minute fight he was rewarded with this stonking 19lb 1oz beauty… “Well Done” 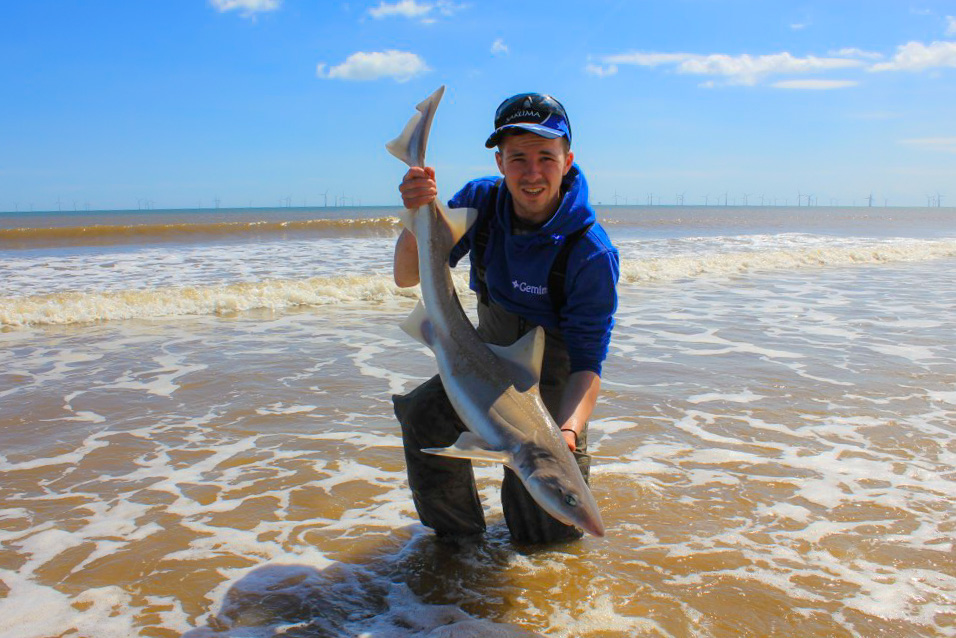 As the day progressed the fishing got better and better.  All in all we managed over 80 Smooth Hounds between us.  Most falling to Arran fished in excess of 150 Yards.  With over 8 double figure fish landed and plenty between 6/8lb.  Moments like this are what most anglers dream of.  I am sure we will talk about this experience for many years to come.  It was most definitely one to remember.

SUBSCRIBE
My scariest catch! At last, a 42cm Minimum landing size for Bass