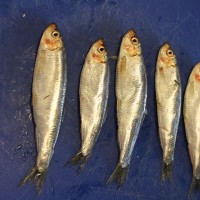 I was very lucky recently when a friend treated me to the Fish at River Cottage course. I have to admit that although I love to fish and cook I am not a lover of fish, but I have always believed that this was down to the fish being poorly prepared and cooked in the most boring manner. Growing up in Scotland our fish was either fried in batter or fried in breadcrumbs. The choice was limited and the mainstay was made up of  what I describe as the three most boring fish in the sea; Cod, Haddock and Plaice. So when I found out that I was going on the course I was very excited.

For those of you that don’t know, River Cottage HQ is set in the Devon countryside just over the border from Dorset and near the town of Axminster. 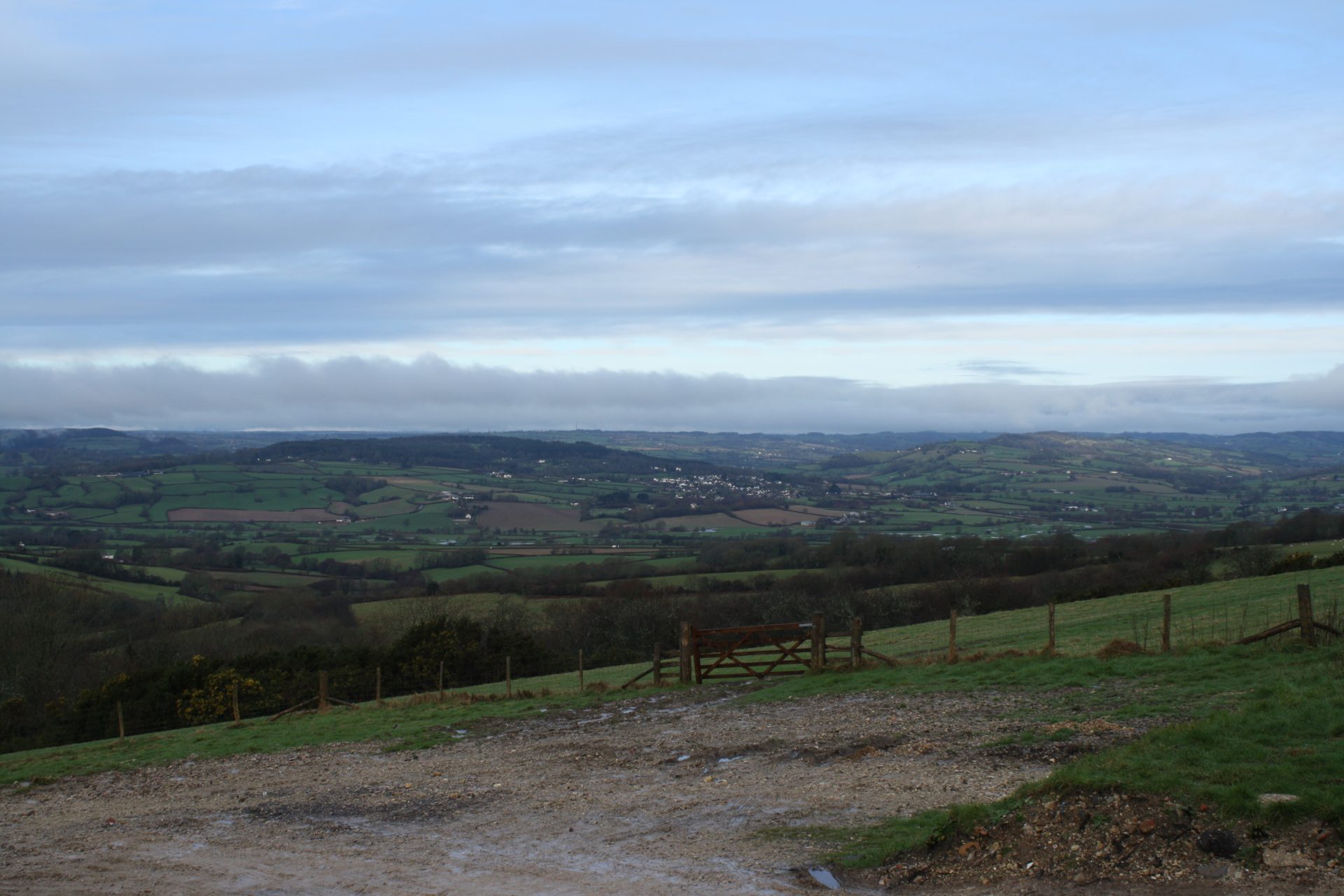 As many of you know I am not an early bird so a 10am start to the course suited me. It is good for those that are coming from a couple of hours away, as they don’t have to get up at stupid o’clock and then spend the rest of the day trying to stay awake. On arrival at the working farm you are taken by a tractor driven trailer down to the main kitchen and classroom area. From this point on my pallet was bombarded by a gastronomic riot. I met with my fellow students and we were presented with the first of the days little treats. Smoked Pollock Rarebit! and oh boy was it delicious.

Whilst we were finishing our coffee and Rarebit we were introduced to Gelf, the Senior Sous Chef and our instructor for the day. 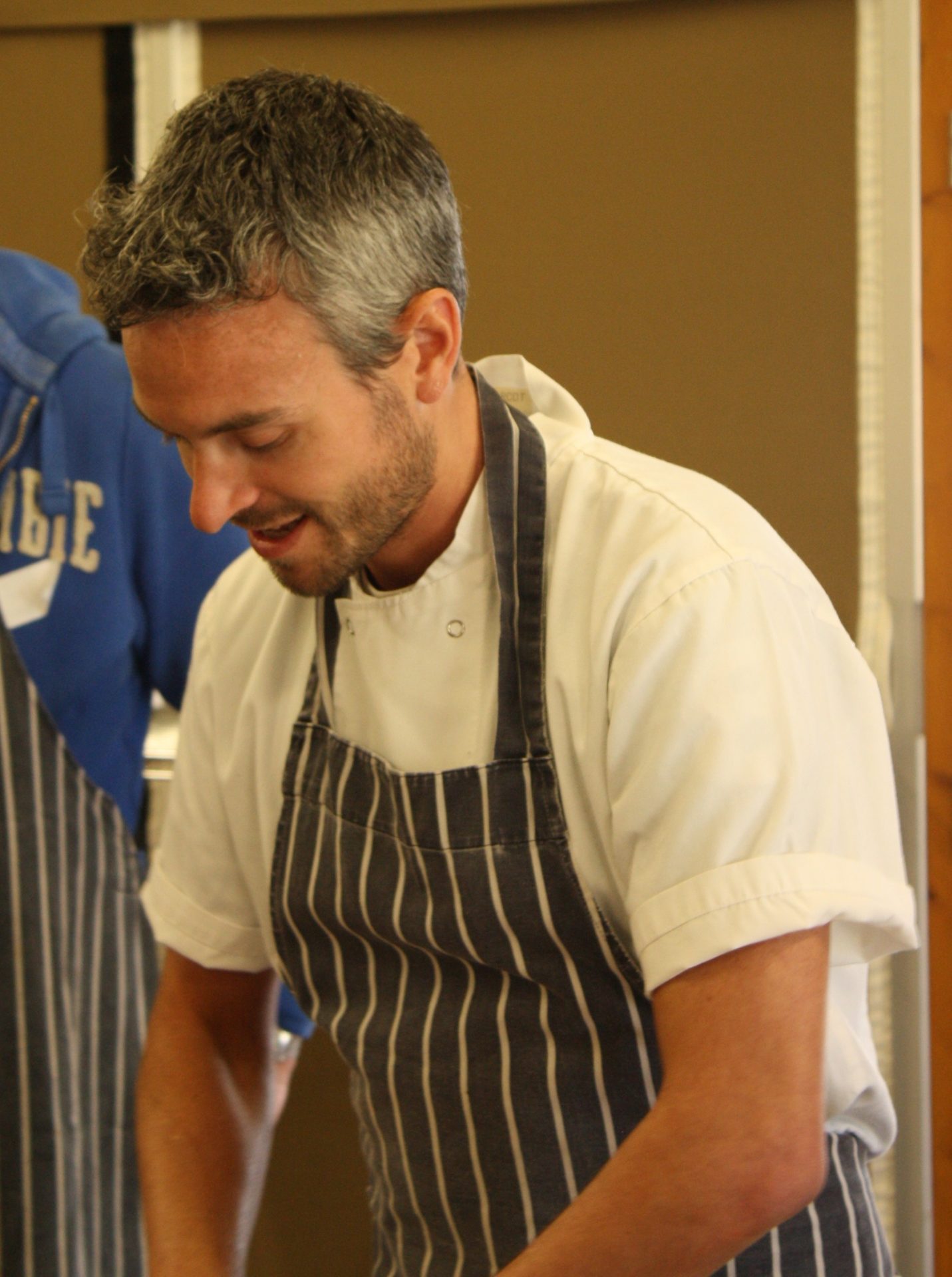 He explained that we would be paired up and would share a kitchen station. At first sight the stations looked quite small, but Gelf explained that they were designed to emulate a small kitchen unit and give a more realistic feel to the course, rather than preparing everything in the setting of a commercial kitchen. 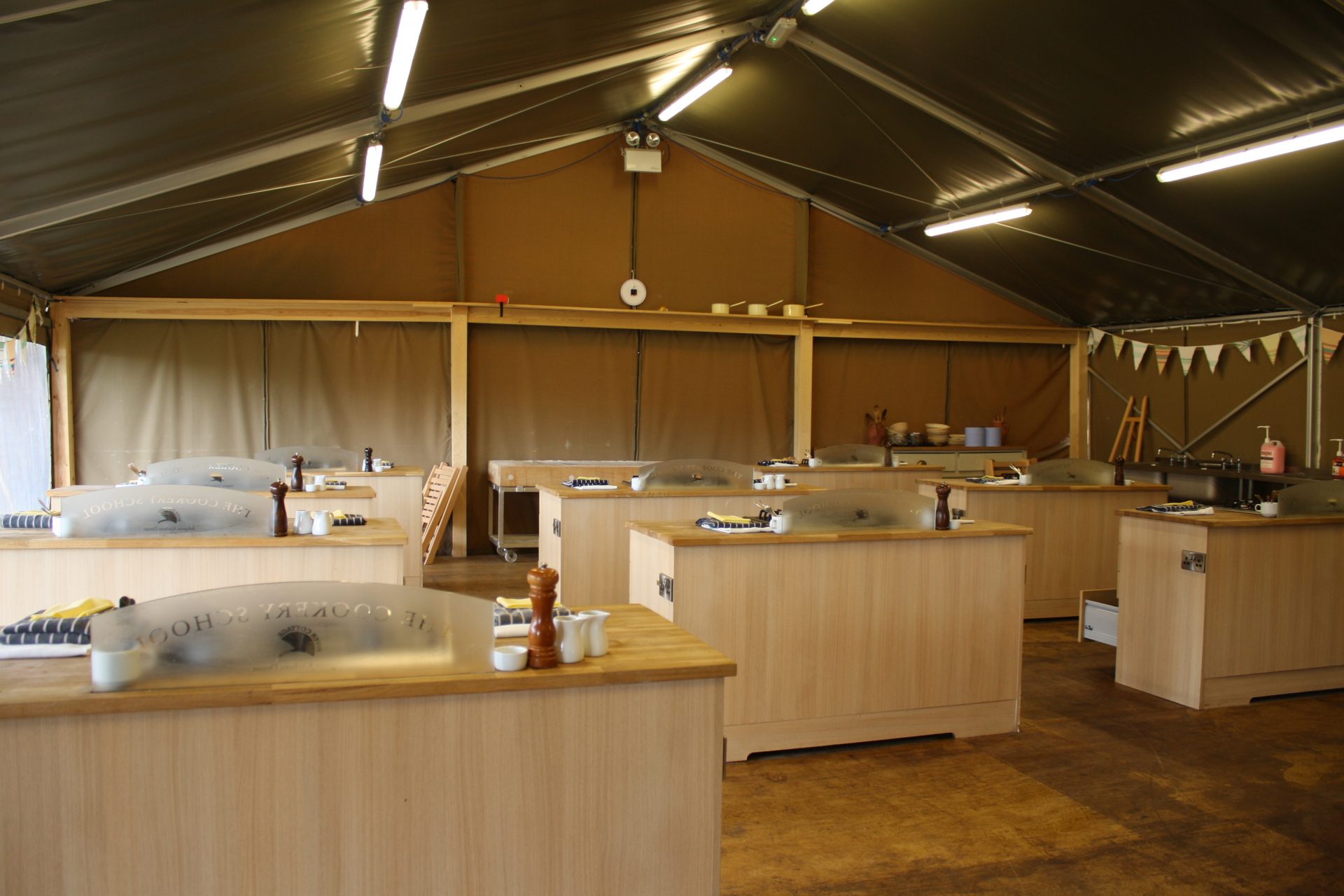 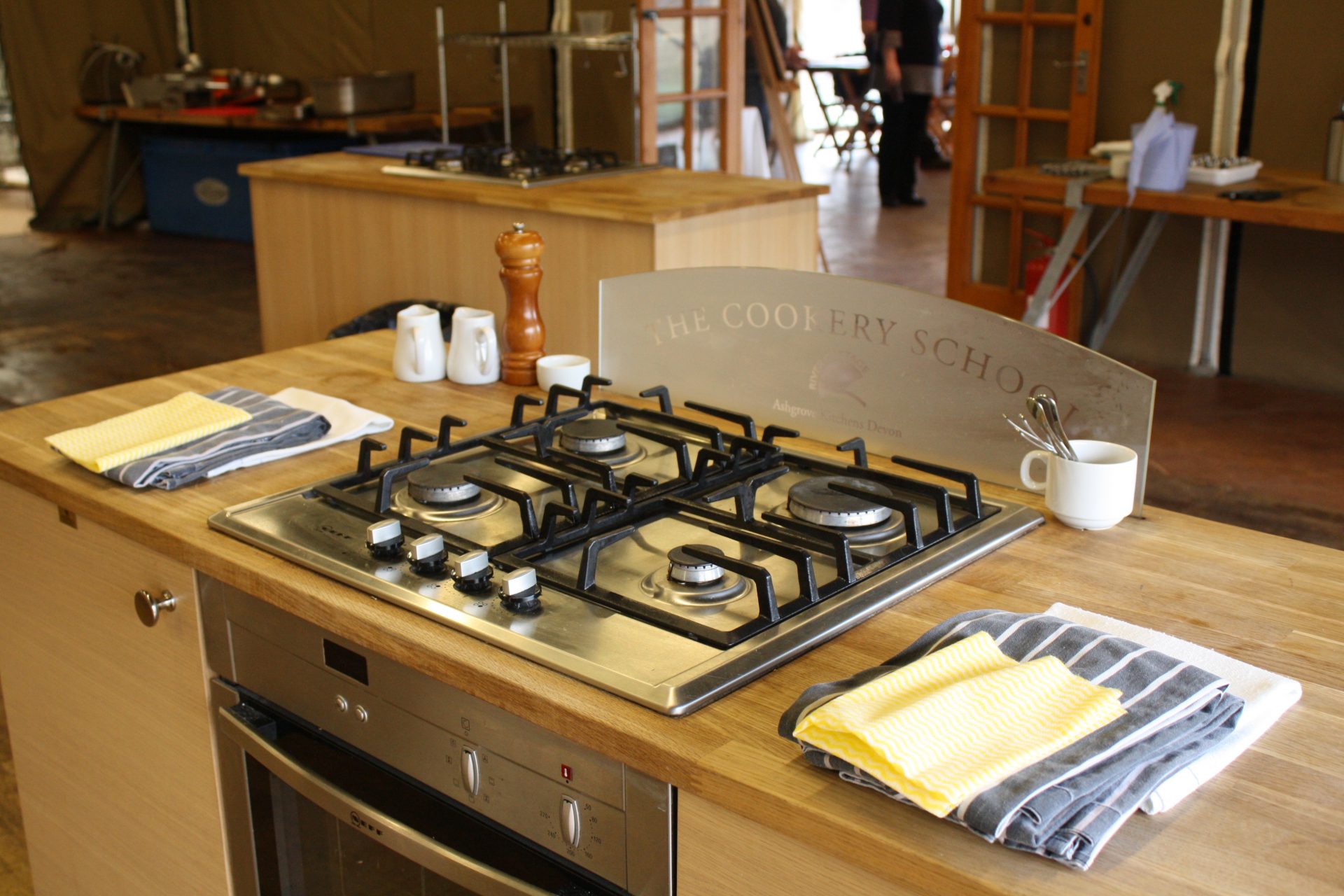 I am not going to take you through the course step by step and I am not going to tell you about every different dish that we prepared, because I don’t want to spoil the surprise for anyone who goes on the course and I know that the River Cottage team change what they prepare based on what is freshly available. What I will do with the help of some pictures is take you through a couple of the dishes.

One of the main aims of the course is to teach you some of the basics of preparing fish and shellfish, so that you can go on and create a delicious dish that you can easily replicate at home. Our first exercise was to fillet a fish. The fish in question was a Herring. A little more difficult to fillet than some fish as it has two sets of pin bones. This is where I really started to learn. I have never been great at filleting and now I know why. It makes such a difference when someone who knows what they are doing shows you. Next up was to get our hands on a live crab. You are taught how to dispatch it humanely before cooking it.

By now it was time for another snack but this time we had to prepare it. I was a little surprised when they brought out some Cod bait in the disguise of Sprats. A quick demonstration from Gelf and we were left to change these Sprats 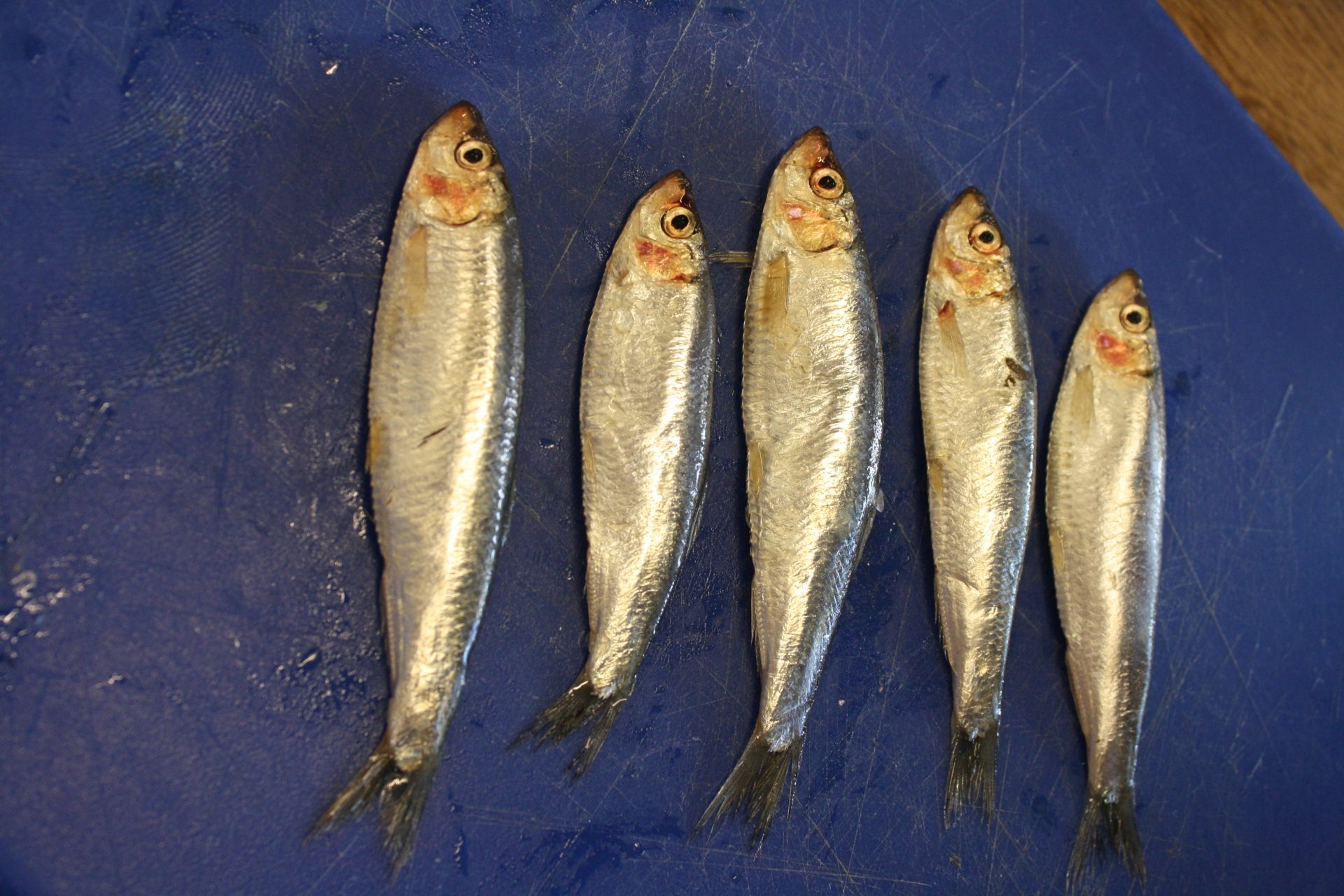 into a delicious bowl of Devilled Sprat’s. It looks like I wont be wasting Sprat’s on Cod any more now that I have found out how great they taste. 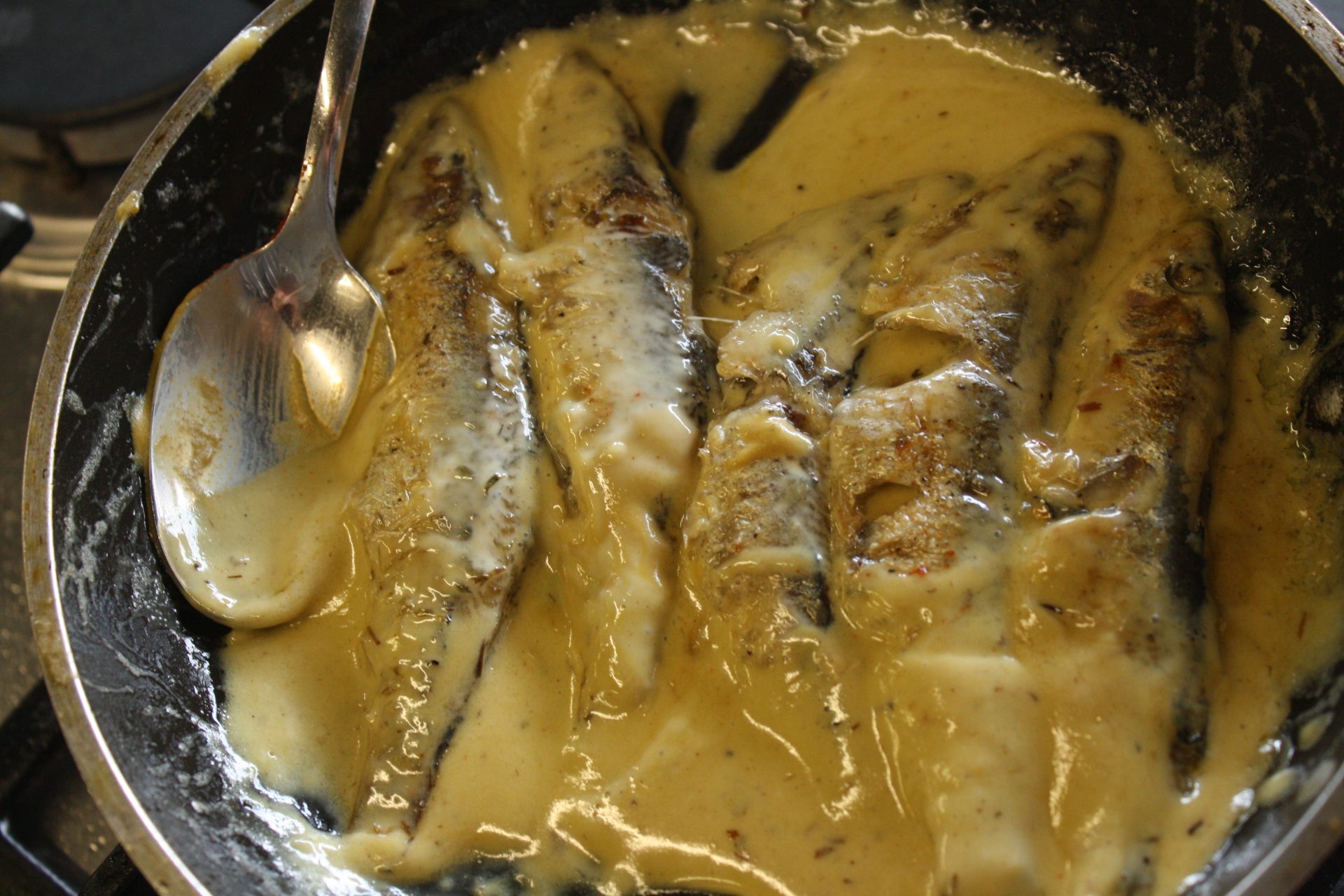 Time now to think about preparing our main course of the day, but not before the crab that we had prepared earlier was presented to us on some toast. I love Crab but this was something else.

Our main course was about putting all the skills that we had learned through out the day into practice. We filleted a lovely fresh Gurnard. 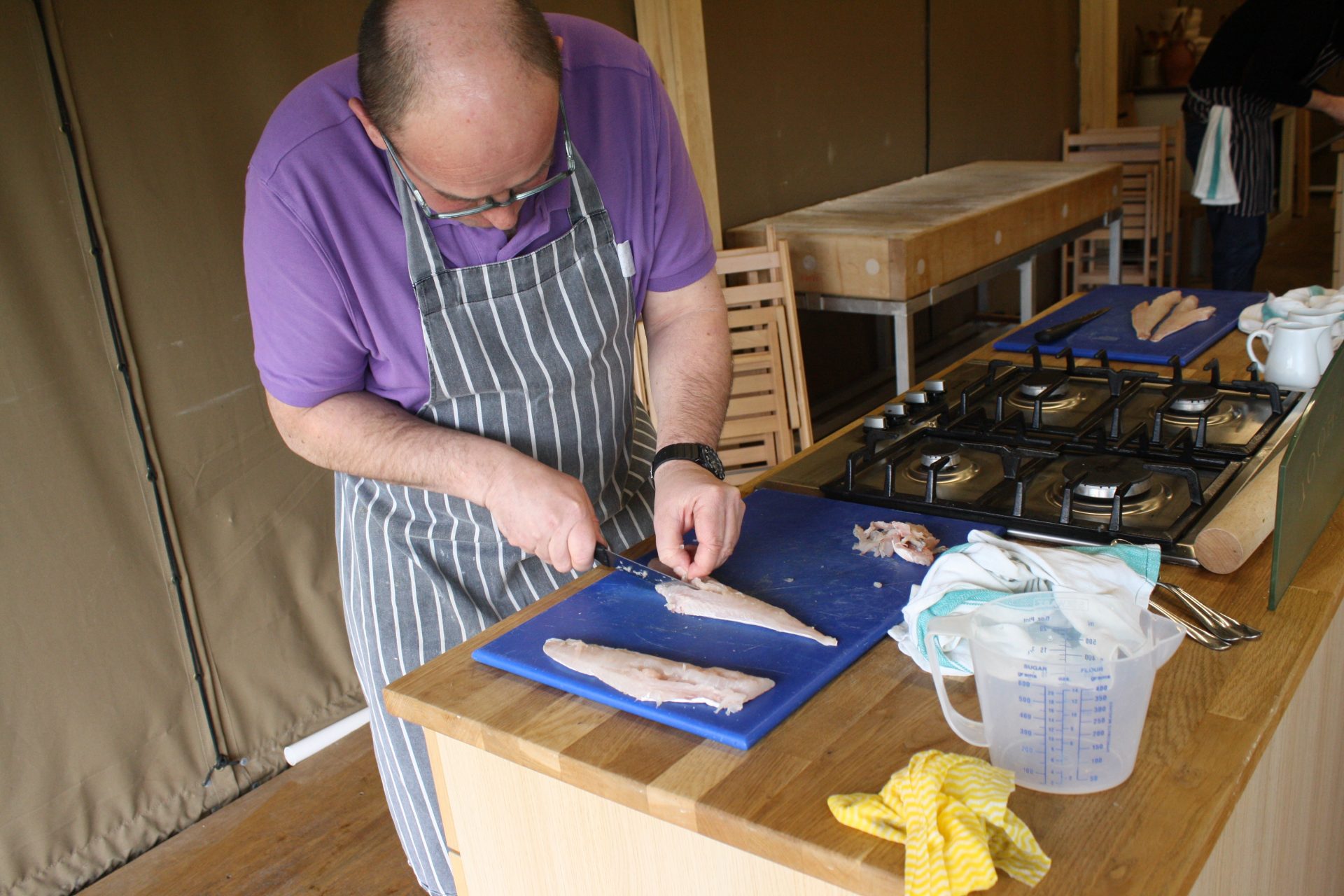 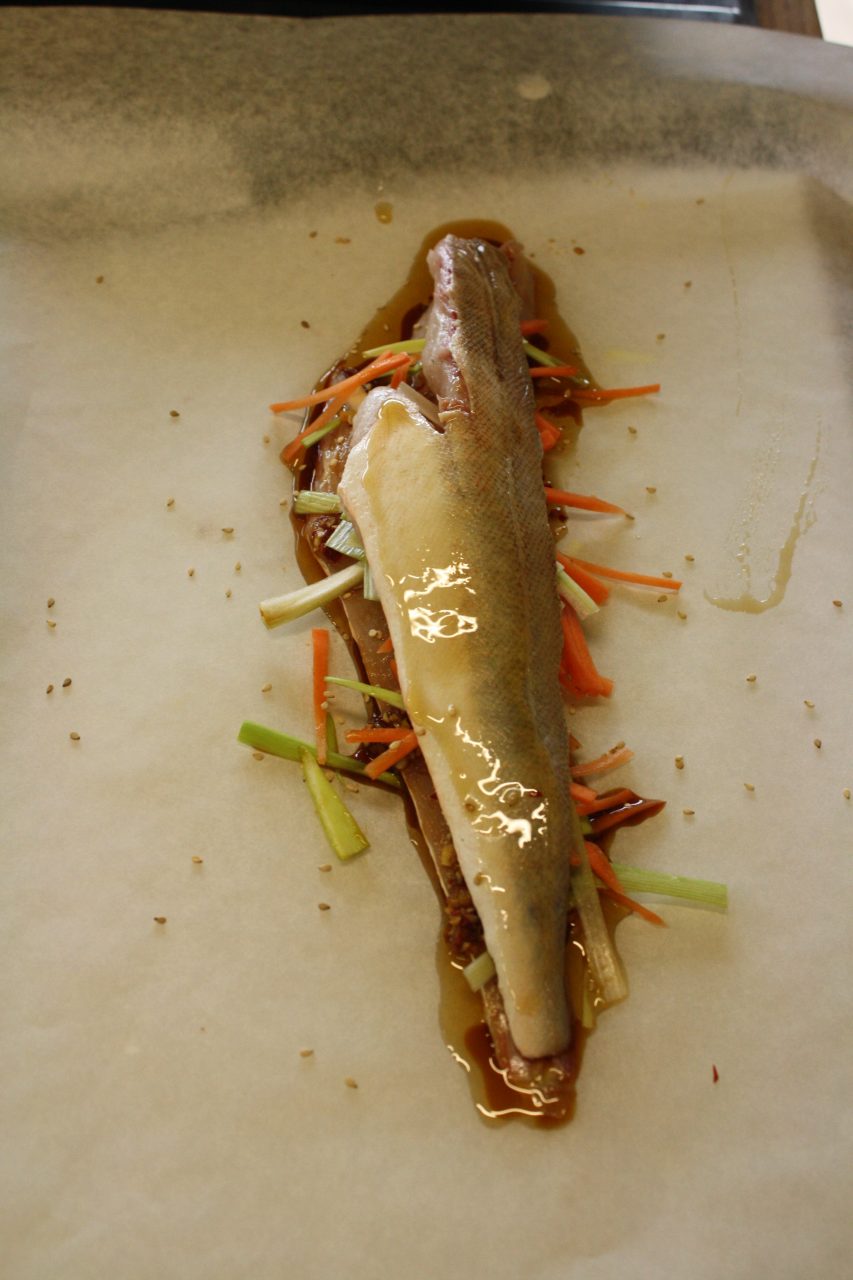 and within a few minutes we had created a dish that was ready to go into the oven. Just as we thought that we were done for the day, Gelf brought out the ingredients for our starter. 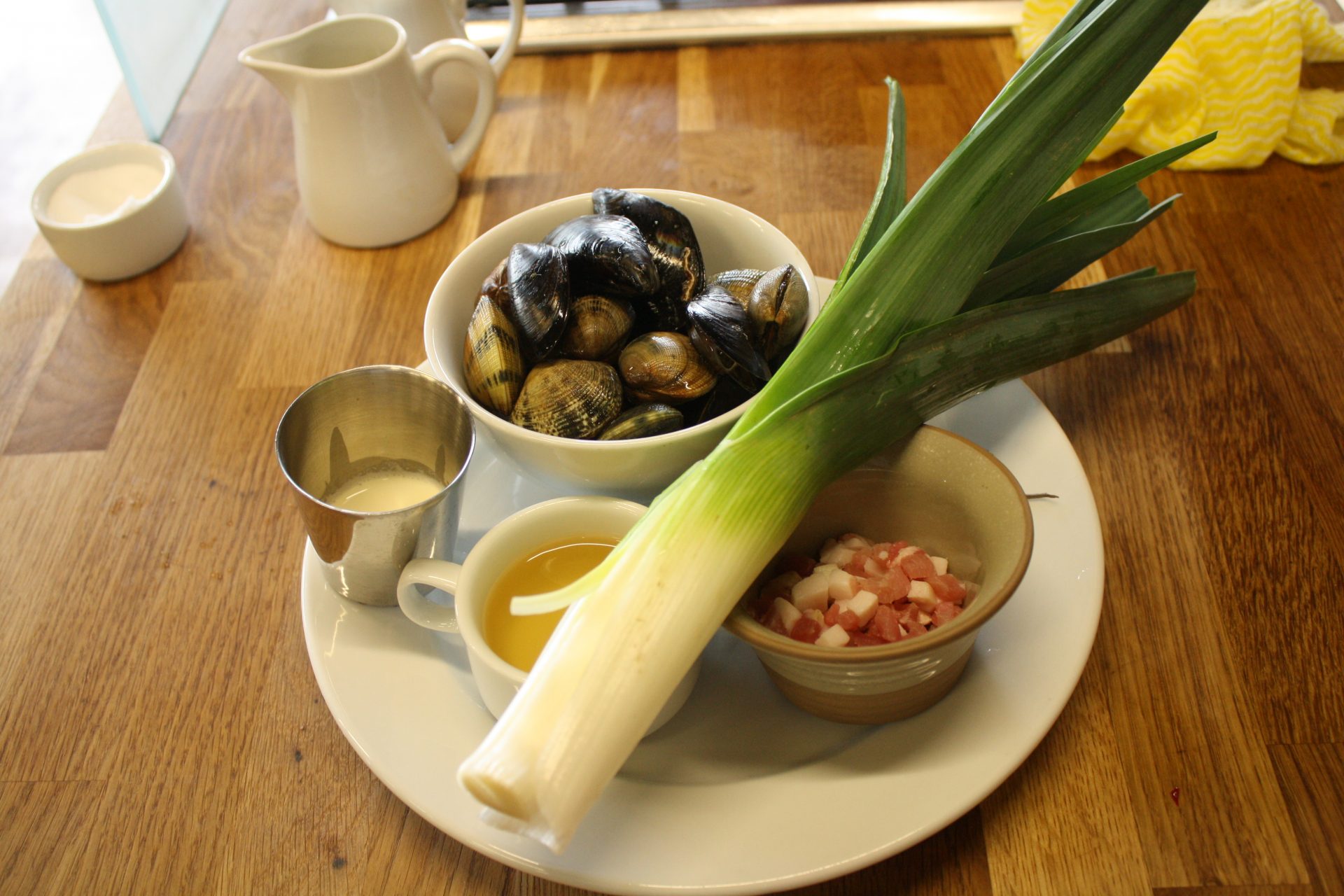 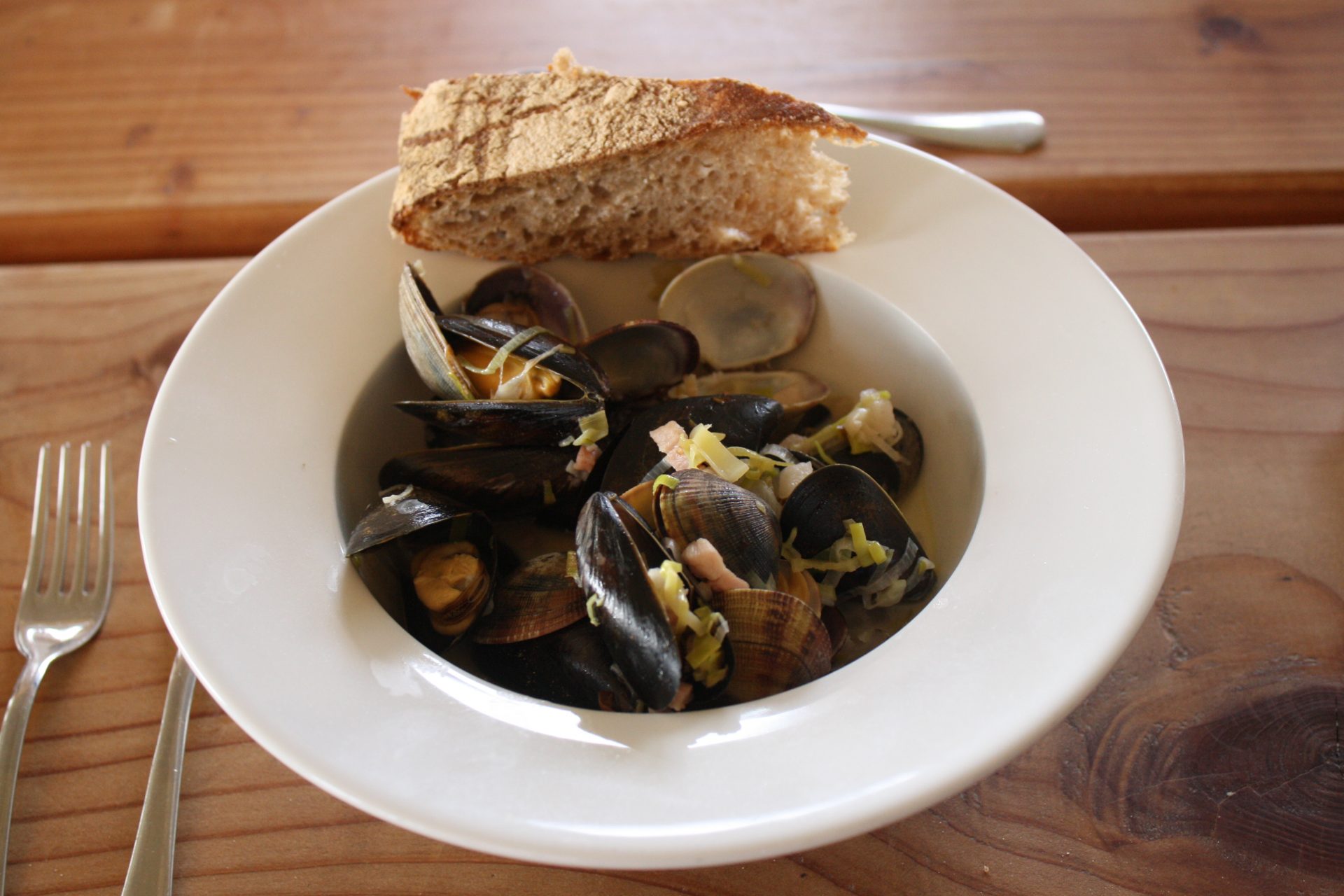 Unbelievably the Mussels and Clam dish pictured above was created from scratch in around 15 minutes. We headed off into the dining area to finish the day with the lovely meal that we had just created. 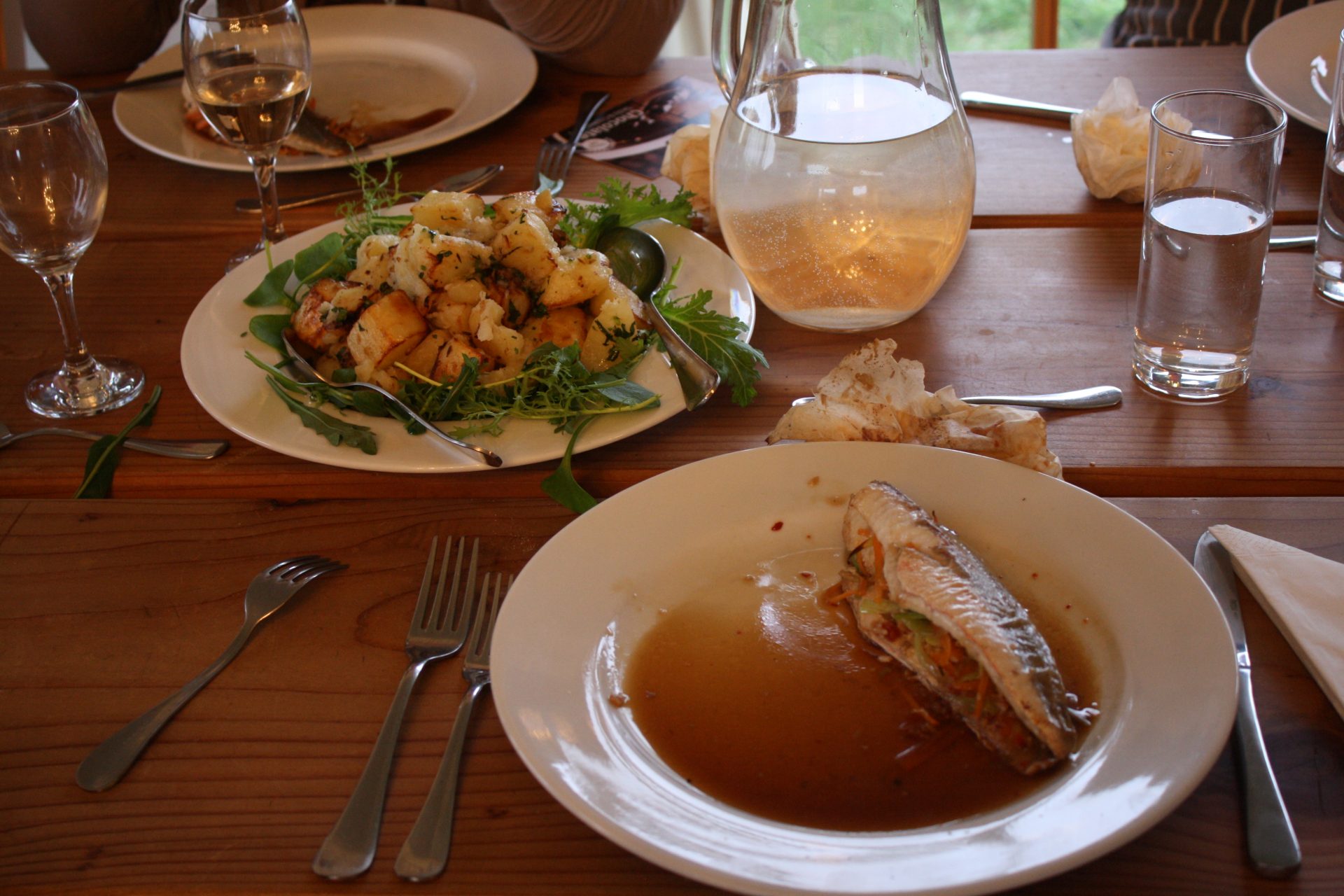 For me the whole course was a huge success. I learned a load of new skills and most importantly I confirmed what I always suspected, fish taste fantastic when it is cooked properly. I can’t wait to catch some tasty species and put my new found skills to use. The day was a lot more intense than I thought it would be. It was never rushed, but we all agreed that it was amazing how much the River Cottage team managed to include in the course. I can thoroughly recommend it to anyone wanting  to learn all about how to prepare and cook fish and shellfish. I will be doing another one of the River Cottage courses.

I have just been sent an email from River Cottage, the events team have been very kind and have offered a discount on the courses for Fishing Tails readers, all you need to do is go to River Cottage and use discount code FISHTAILS20 at the checkout. Offer valid until 30th June 2013.