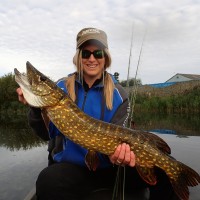 This is my first article for Fishing Tails, so I had better introduce myself. My name is Jo, I am a fly tyer and fisherwoman/wangler whatever the term is! This year I took part in a TV fishing competition called Earths Widest Waters : The Big Fish which took me fishing all over the world, I managed to make it to the semi final before sadly leaving the competition. I love fishing whatever the method, but living near the Norfolk Broads there is one fish that occupies my thoughts most of the time – The Pike. There are many methods used to fish for pike but personally I really enjoy using the fly, and I tend to do this from a kayak.

I tie a lot of pike flies and I have, like most who fish for pike with fly have my favourite patterns. I tend to use large hooks often a 6/0, I really like the Partridge absolute predator hook, some folk may dislike barbless hooks but if the fish is played properly I have always found this hook to work well for me, allowing speedy de-hooking to return the fish quickly. I tend to use natural materials like Nayat and fox tied sparsely in a way that creates a nice big profile without the weight. My flies can range from 6 – 10 inches long, but many pike fly tyers such as Nickolaus Bauer will tie huge flies up to 15 inches. I have often heard the expression ‘big fly big fish’ but is this always the case? Well, definitely not in the world of Salmon fishing, but what about the Pike? I kept this in mind on my next few outings after the water wolf. 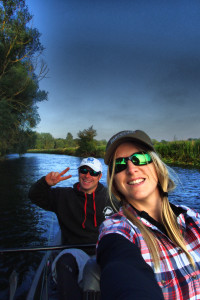 As I have mentioned I fish from a Kayak, a very sturdy two man Kayak by Nucanoe which boasts proper seats and allows you to stand up to cast. I love it!! My husband Jonny and I make a great team when out after pike, we take it in turns to control the yak whilst the other casts. What I love about kayak fishing is the quiet, we can drift silently on the water, and as our profile is relatively low we can stalk the fish without spooking them. One of the rivers we fish is controlled by a sluice gate and on this day the water was at its regular depth for the river, it was a very still, relatively cool but bright morning. Parts of this river can be accessed from the bank, so we carried on past these areas assuming they get fished quite hard, to reach parts that can only be fished from the river itself. We had decided today we would use the big tamer style flies I tie, I tied on a pink one and Jonny a purple one. I sent a well aimed cast just in front of an overhanging tree and retrieved it slowly stopping occasionally to let the fly dip, just as I lifted the fly from the water to recast a smallish Jack rushed from beneath the tree sending up a spray of water as it narrowly missed the fly.

With a rush of added adrenaline I carried on casting in the hope he might return for another look, but soon we had drifted to the next corner and it was Jonny’s turn. At this point in the river there is a drop off point running parallel to the bank, Jonny cast his large purple fly along the ridge of this drop off, a couple of slow retrieves and with a strip strike the line went tight and he was into a nice 5lb Jack. As he was bringing this fish yakside a much larger wolf crept up from the deeper water apparently interested in either what the jack was eating, or eating the jack. Quickly I picked up my #10 and flicked my pink fly just past her, she spotted it opened her massive jaws and in seconds I was fighting a fish also. We manage to subdue our catches whilst taking care not to tangle our lines, and the netted them together. 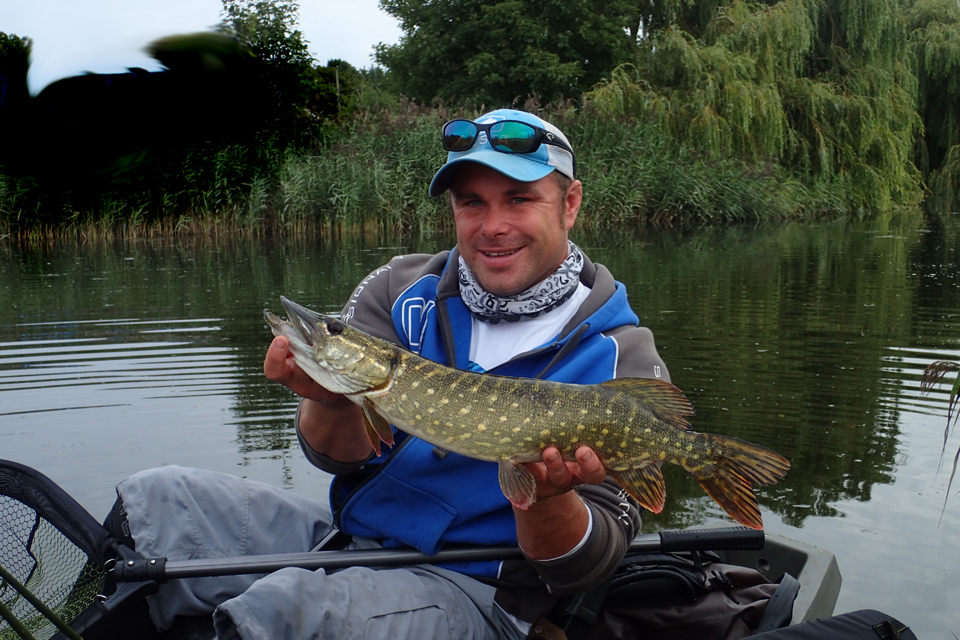 Jonny’s fish a lovely 5lb jack who I owed thanks for my gorgeous 10lb beautie, fantastically darkly patterned thanks to the clear water in which they live. 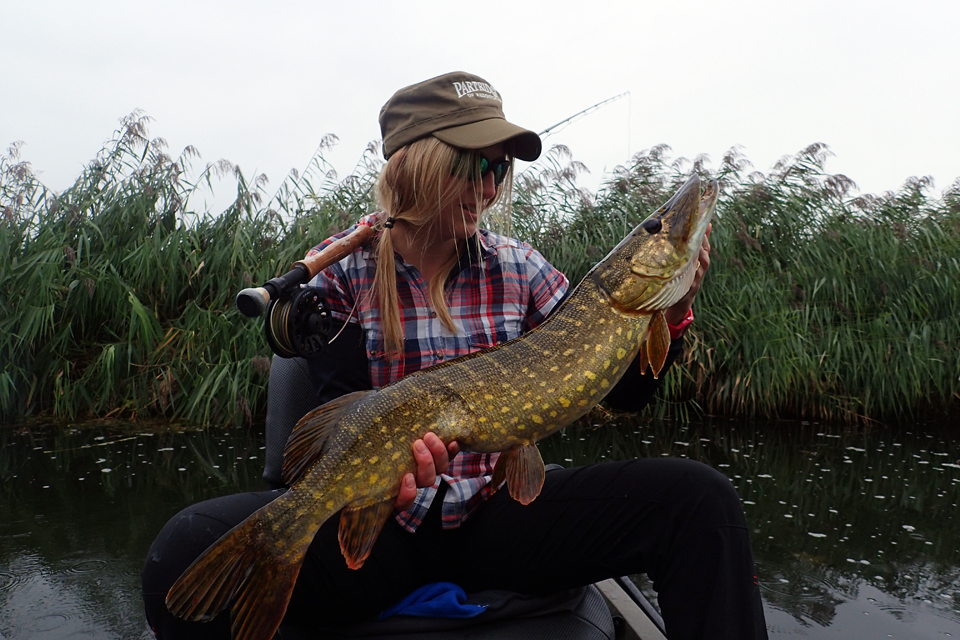 We carried on fishing for the best part of the day, sticking to the flies we chose at the beginning of our session. We caught 10 fish that day, 5 fish each. My largest and PB fly caught pike at around 12lb and my smallest just at couple of pounds. So we can establish that big flies catch both big pike and greedy little pike.

A couple of weeks later we returned to the same river, it was a chilly morning thick with mist. We launched the yak and silently paddled off, the mist engulfed us and there was an intense eerie feeling in the air, so quiet and still. What we did notice however was that there was a change in water level from last time, the sluice gate had obviously been opened and the level was dramatically lower, maybe only a foot and a half in some areas. We paddled on past the bank fishing area, we tied on our trustworthy pink and purple flies again and started casting. The water was exceptionally clear this day and what we noticed was there seemed to be very little small fish in the shallows. Normally we would see little shoals of them darting here and there but there were none today. 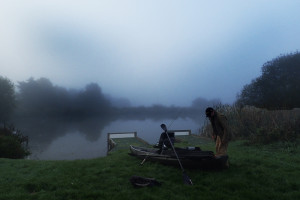 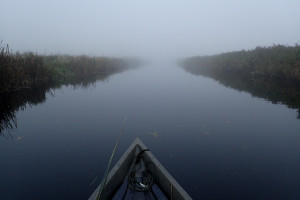 We fished on for a good hour with nothing, not even a follow. It was Jonny’s turn to fish and he decided he would change his fly. A couple of days before I had tied up some small whistler type flies, red and white on #2 PAP hooks and only 4 inches long. As we drifted towards the next corner the water level gets slightly deeper, and of course that was more shallow than normal, we saw a small eruption of baitfish in the deep corner by the reeds. That’s where they have gone, to the deeper water for refuge, but there was obviously something hunting them. Jonny casts towards the reeds once, then a second time and this time the hunter showed itself! The line went tight and the rod arched over, this fish had a bit of fight in it and it took a good few minutes for Jonny to subdue her but soon enough he had a nice size snapper in the net. 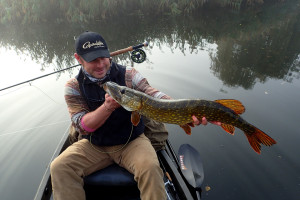 I decided I would carry on with my big pink fly as I had grown confident in it this season, my turn ended once again without a bite. I began to think that maybe my fly was too big this time, maybe something had changed and they just were not interested. 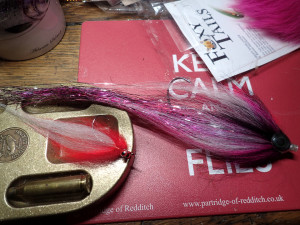 I decided that if Jonny caught again on the smaller fly this time it must be the choice of fly that’s making the difference. He began casting and before long he was in again, another nice sized wolf. Ok, I’d had enough of watching Jonny catch all the Pike so I changed my fly from the 10inch pink tamer, to a red and white whistler half the size.

We were at the drop off now, the water obviously shallower than normal but I cast into the deeper water let the fly sink a bit then slowly retrieved, a hit, strip strike and I was in! Another gorgeously marked pike of around 10/11lb. 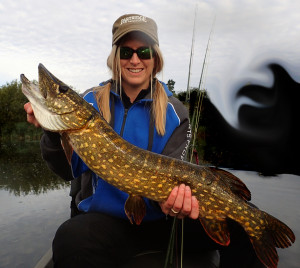 This session was slightly slower but we managed to catch 6 fish, on the paddle back to the launch point we talked about what was different and why we thought the fish had taken the small flies this time. We concluded that due to the much lower water levels all the small bait fish were forced to move out of the reed beds and weedy shallow areas into the slightly deeper waters. The pike had been aware of this and so were switched on to hunting smaller prey, when changing to a smaller bait fish imitation the pike just could not resist! So big fly – big fish is still a relevant and very true statement, but in the same conditions small fly – big fish is the route to success – even in the pike kingdom.

4 Responses to "Does Size Matter?"