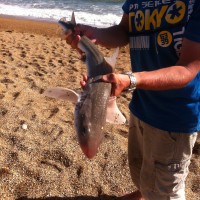 By Sean McSeveny On August 16, 2013 · 3 Comments · In Chesil Beach, Reports
Black Bream, Gurnard and Mackerel, seem to be the main species being landed from Chesil at the moment, with a few nice Smoothound as well. Paul Foster sent me this picture of a nice Smoothound he caught on Ragworm (not the quid a chuck Peeler that I rant about) from Burton Bradstock. 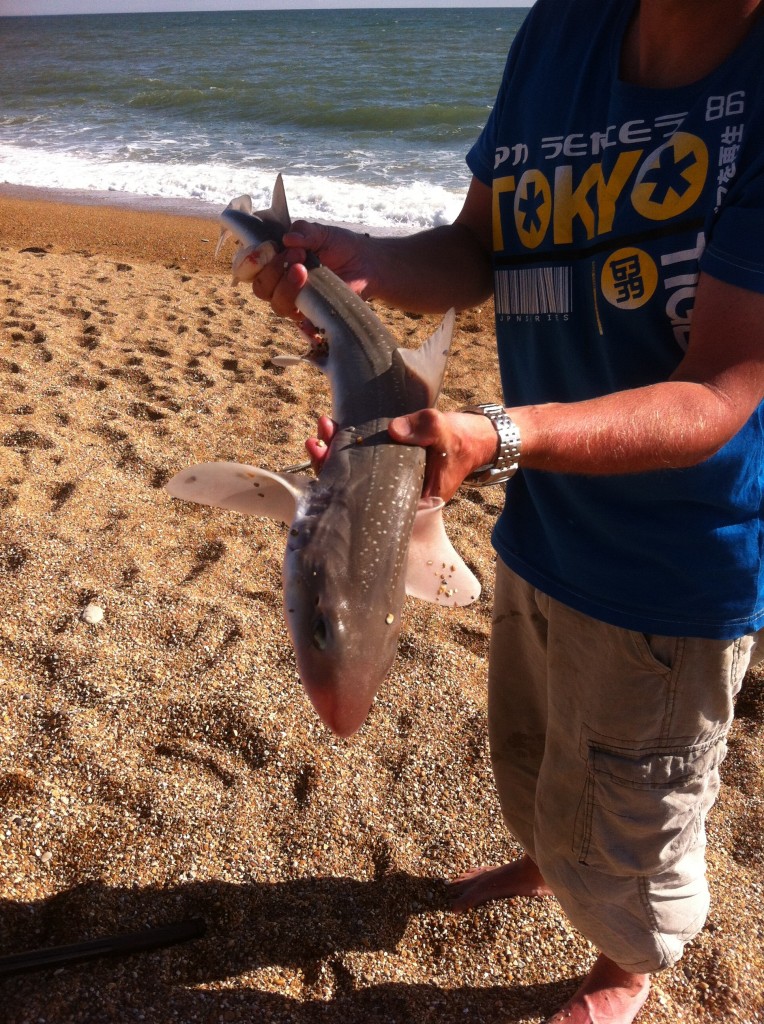 Hugh Nicholson emailed me, saying he tried Peeler Crab for the first time at Abbotsbury and caught his first ever Dogfish. He says it gave and unforgettable bite. I am guessing that you hooked a Smoothound Hugh, and not a Dogfish. Believe me when I say you would easily forget a Dogfish bite. They have to be the laziest fish in the sea. Smoothound on the other hand will drag your rod from its rod rest into the water, and if you are lucky enough to grab your rod before it disappears they will then proceed to drag you along the beach whilst you try to land them, and thats just a baby 3lb fish.

I have just looked at my satellite feed and I can see there is a very noticeable band of warm water off the beach between Chesil Cove and Moonfleet.

One of the main reasons I love fishing Chesil Beach so much is you never know what you are going to catch. I love to hear about unusual species being landed. Yesterday a local angler brought a Spanish Mackerel into Chesil Bait n Tackle. It weighed an impressive 1lb 4oz, and took Bob 5 attempts to land it.

Fishing competition In my last fishing forecast I mentioned about The Big Fish Event being organised by Lyme Regis Sea Angling Club, well I have news about a Weymouth Sea Angling Society open competition for youngsters this Sunday (18th August).

The competition is being held on Weymouth Stone Pier between 3pm and 5pm. Registration is open from 2.30pm at the Stone pier. There will be two categories; Under 12’s and over 12’s (under 18), with prizes for 1st, 2nd and 3rd. There will be plenty of Weymouth Society members on hand to offer help and advice to all the youngsters. From what I remember of the Weymouth junior competitions, all fish count and it is a catch and release competition. This is a great friendly little competition for juniors of all abilities and it is not just for locals. If you are on holiday then bring your kids along, they will love it. If you are unsure where the competition is at, then just pop in to one of the tackle shops in Weymouth and they will point you in the right direction.

Chesil Beach: A bit choppy with a 1m swell, water is clear

Chesil Beach forecast: Today should be good for most species of the beach. Mackerel are around in good numbers as are Gurnard. Bream are more prolific towards Portland and the Ferrybridge end of the beach. West Bay has thrown up a number of Plaice and Sole over the past couple of days, with a few Bass being landed from the harbour wall.

On Saturday it is going to be a bit lumpy on the beach with some pretty strong winds forecast. Not great for Mackerel fishing, but fantastic for Bass. Big baits close in should see some nice Bass landed. Be careful as the swell will probably get up to 3m

Portland: The Wrasse and Pollock fishing is really good from the island at the moment. Some lovely fish have been landed, with several Wrasse exceeding 5lb. They were caught on large Ragworm, which seemed to out fish even Peeler Crab. Church Ope Cove produced Wrasse, Pollock and Bass for my mate the other evening. Having lost most of his weights to the snaggy ground, he found a 15g jig head in his bag and with his last bit of bait, a Mackerel tail, he cast it out on his light lure rod and within seconds he had hooked a 3 1/2lb Bass.

Portland Harbour: Lots of Scad and Garfish have been caught around Ferrybridge over the past couple of evenings. No reports of Bass, but I spotted plenty of Mullet behind the Ferrybridge Pub car park. They looked like Thin Lipped Mullet, which you can target with a baited Mepps.

Weymouth Bay: Both piers continue to produce lots of different species and are easy to fish marks. The harbour has some big Mullet cruising around in it. If I had the time I would be targeting them with bread or dog biscuit on the surface.

Preston Beach is a good option on Saturday if you want from shelter from the strong SW winds that are forecast. I wouldn’t be surprised to hear of Rays, Dabs, Bass and Smoothound coming from there.

SUBSCRIBE
Lure review: Megabass XLush Enjoy your holiday with some fishing in Dorset.