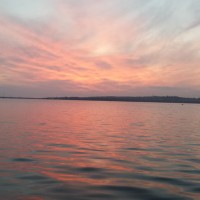 What a difference a few hours can make! I started off on a guiding session yesterday morning in the hope that the May water had cleared enough to make the water clear enough for lure fishing. You can imagine my disappointment when I arrived at my first mark and the one that I thought would be the clearest, to find the water fairly clouded with visibility down to less than 2m. Six hours later and only half a mile down the coast, the water had cleared considerably. The fishing suddenly switched on and what looked like being a poor day turned into a great day. We managed Mackerel, Pollock and several Bass on the lures.

I was not the only one having a good day, in fact compared to some, my day was average. I know that a lot of Bass were caught on lures from several different marks throughout Dorset. Chesil Beach came alive with lots of good sized Smoothound, Rays and Bass being caught on bait.

That was the catch report, the forecast is mixed. Chesil will fish really well for Bass, if you are prepared to take a beating. Conditions are going to be harsh for the next 24 to 48 hours. The sea state will build to make it almost unfishable. Bass will love these conditions and If you can get your cast out far enough then decent Smoothound and large Rays will be caught. Live Peeler is going to be the best bait.

This is a video shot last year, but showing the same conditions on the beach as we have today. The water is much clearer at the moment and there is not as much weed.

Chesil Beach: Rough with waves up to 4m, with winds forecast as even stronger later, I expect the beach to become unfishable at some stage. Water clarity is not bad as of first thing this morning, but it will colour up quickly.

Portland: 2m swell with some larger waves exceeding 4m. Water is fairly clear towards the Bill and on the East side.

Chesil Beach forecast: It is rough and dangerous. Don’t risk fishing it for some Mackerel, there are safer and easier places to go today. If you are after Bass then you could be in for a good day, but do take care. Don’t fish on your own and keep well away from the waters edge. A short cast of no more than 20yds is all you need with a nice big bait. Whole Calamari Squid, a large fillet or head of Mackerel, or my favourite live Peeler crab are going to give you the best chance of a nice fish. I know there will be a double figure Bass caught this weekend, I hope I am lucky enough to catch one.

Chesil Cove often gives a slight advantage to those looking for a Bass in these conditions. The food gets pushed into that corner of the beach and the fish know that. Unfortunately the weed also gets pushed in there.

Portland: The West side will be almost unfishable, but the East side will offer plenty of shelter. If the weed stays out of CHurch Ope Cove then that will be a good option for Wrasse, Pollock and Bass. All of which can be caught on bait or lures.

Portland Harbour: I know that there have been a few Bass and Flounder caught in Portland Harbour this week. Some Black Bream have been caught on the shallow water sand flats on Ragworm. I would avoid Hamm Beach, as the wind and kite surfers will be taking full advantage of the high winds. The area along the Rodwell trail from Ferrybridge to the Sandsfoot Sailing Club is a good sheltered option.

Weymouth Bay: The harbour is full of Mullet, mostly Thick Lipped, that can be caught on float fished bread. I tried yesterday for some Thin Lipped Mullet but every time I cast to them the  Thick’s would spook and scatter making the Thin’s turn away from the lure.

The Stone Pier is fishing really well. Lots of Mackerel and some Garfish are being caught on float fished Mackerel strip or small lures. PLenty of Pout, Pollock, small Black Bream and decent Wrasse can all be caught by simply dropping a bait under your feet.It is likely to get busy down there with anglers trying to find shelter out of the wind. There is no feathering allowed on the pier. Please respect this and make sure you take your litter home or put it in one of the bins.

Preston beach, which for those that don’t know is the beach at the far end of Weymouth beach, away from the harbour. would be my number one choice today if you want to fish a sheltered mark. It will be good for some Bass, Flounder, Gurnard and if your lucky a Ray. Don’t cast too far if you are near the far end of the beach, as there is a reef that runs parallel for about half a mile.

SUBSCRIBE
Catch report & fishing forecast for Dorset including Chesil Beach, Portland & Weymouth Bass fishing on Chesil Beach, when its at its best