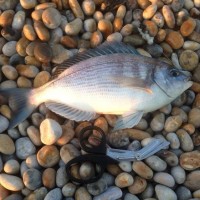 Looking at the wind forecast I can see things are going to start changing this week. Later this afternoon we will see the wind switch from the east to the more normal prevailing South Westerly winds that we are use to. This will bring in much warmer air. It also normally brings in rain. Anyway I am sure you are not interested in a weather forecast, so lets get on with  a fishing forecast.

I ran the first of the River Cottage Shoreline fishing courses at West Bexington on Thursday. Much to my surprise we managed to catch plenty of fish. Although we didn’t manage any Plaice we had lots of other different species. The one common factor was that every single fish was caught on fresh Lugworm. I had almost every bait that you could think of, including my favourite Peeler Crabs, but all that the fish were interested in was Lug.

There have not been that many people fishing Chesil, despite it being Easter holidays. Some of those that did get on the beach managed Plaice, Rays, Pout, Rockling, Dabs and even a few Mackerel. I had an email from an angler from Exeter that says he fished Cogden and managed to catch 4 Thornback Ray up to 8lb. I can’t confirm this as he has not sent any pictures, but he is normally a reliable source.

If you are into competition fishing, or fancy giving it a go then this Sunday (7th April) is the Chesil Beach Flatfish Open.
Signing on is from 9am in abbotsbury Car Park and fishing is from 11am to 5pm.
All fish to be brought back to scales Alive if possible (all anglers recieve a small gift for keeping fish alive.
One Rod three hooks.Fishing defined boundaries between Dragons Teeth to Hive Beach . You can drive between boundaries.
Flatfish only
£500 longest aggregate lengh . £250 longest fish + huge prize table.
Penn Points
More details on www.weymouthangling.com

Water temperature 6*c. This is the lowest it has been, but I think it will start to rise this week (I hope).

Chesil Beach: Calm. The water is finally clearing especially at the Portland end of the beach.

Chesil Beach forecast: Conditions look pretty good for Plaice this weekend. The tides are picking up from the neaps and the water is much clearer than it has been for ages. There is still a bit of colour in the water, so if you are targeting Plaice then think about using beads to give yourself a bit of an advantage. This time of year normally produces some early Ray’s. My favourite bait for Rays are Peeler Crabs and Sandeels.

Portland: With the water now clear around Portland the Pollock and Wrasse fishing should be pretty good. It is still very cold for the Wrasse but the warming sunshine should hopefully induce them to feed. They can be caught on soft plastic lures as well as worm and crab baits.

Portland Harbour: I have noticed a bit of bird activity as I have been driving past. This could meen that the bait fish have started to arrive. This is the first sign that the Mackerel, Pollock and Bass will not be too far behind.

Boat Fishing:  A lot of the Weymouth charter fleet will be out today, as will lots of smaller private boats. Most will be heading for the Shambles to see if the Plaice and Turbot have moved in. Try the Hood entrance for Pollock, early Mackerel and Bass.