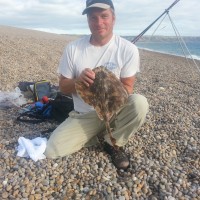 By Sean McSeveny On August 26, 2013 · 4 Comments · In Chesil Beach, Reports
Fishing on Chesil Beach during August has been a bit more hit and miss than normal. It has been very inconsistent. A typical example is when my mate went and fished West Bexington on Saturday afternoon. He had a great session with a couple of Bass up to 6lb, Plaice, Dabs and Sole all before packing up at 9pm. He went back again to exactly the same spot the next day and had nothing but Pout and Dogfish.
Regular contributor Leo, reported similar from the Ferrybridge end of Chesil, where he started catching Mackerel on his first cast, then caught nothing until his last cast when he pulled in this small but perfectly formed Undulate Ray. 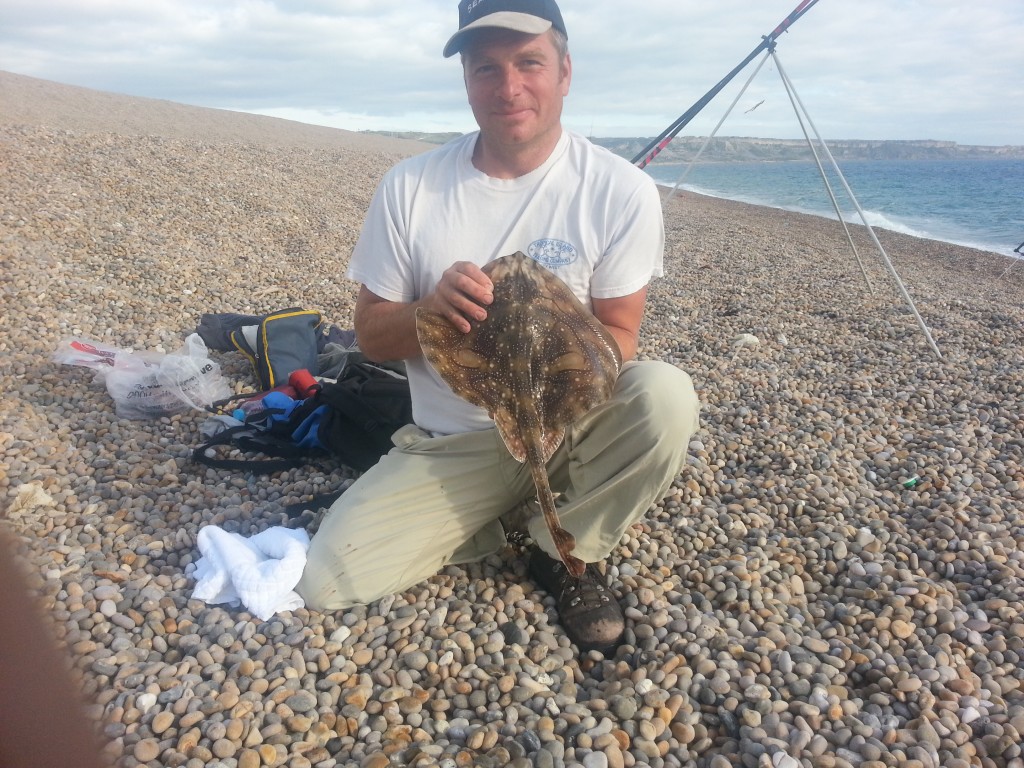 Sorry that the fishing forecast has been a bit irregular recently, but with school holidays and a full guiding program, I have been struggling to find the time. Things will be a bit quieter for me this week, so hopefully I can get back into more regular reports and finish of some of the fishing marks and tackle reviews that I have been promising.
I have heard several reports of anglers catching Codling at Dragons Teeth last week. Many of you may think that this is unusual, but the same time last year we had a run of Codling. It only lasted about a week and it is probably the same shoal from last year, as most of the Codling caught were around 5lb.

Chesil Beach: Small chop with less than 1/2m of swell. The water is clear

Portland: Small chop on the West side. Calm on the East with clear water

Chesil Beach forecast: Still plenty of Mackerel all along the beach with some Bass being caught on feathers amongst them. Sole and Rays are being caught from West Bexington and Cogden with  Codling from Abbotsbury. I believe that the Codling will go as soon as the tides die off. Expect Gurnard and Bream from the Ferrybridge end of the beach.

Portland: Over the past few days the wind has been from the North West, which is quite unusual for us. This has created some very good conditions for lure fishing on the West side of Portland. Especially around the rocks at Chesil Cove and towards the area known as Hallelujah Bay. The wind has pushed food and bait fish into the area, creating an ideal feeding area for Bass. As it can be shallow with lots of boulders then surface or shallow running lures will be the best choice.

Marks at the Bill will also fish well, especially for Wrasse and Pollock.