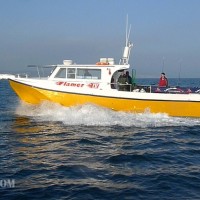 I love wreck fishing out of Weymouth, so I was delighted when I was invited down to Weymouth to film and test some new lures on board Flamer IV charter boat owned and skippered by Colin Penny. The skipper has many years of experience since 1995 and has won many awards, the task for the day was to visit wrecks lying off Weymouth and search out any Cod or Pollock using lures to catch them.

Weather forecast for the day was excellent with low winds and the possibility of some sun too, so drifting wrecks should be quite pleasurable. I arrived early around 6-00 am and the skipper and his crewman Andy Colins where already on the boat as the plan was to leave early 7-00 am and get onto the wrecks as soon as possible for a full days fishing.

Armed with my HD video and stills camera plus a box of new lures for the crew to trial and see how productive they were going to be and with the crew of mixed experience some who have been fishing many years and some that have never fished wrecks before so it will be an ideal lure testing crew to film in action.

The boat itself Flamer IV as its name implies is the latest in a line of Flamer named charter boats and it’s large, fast and spacious, Flamer IV is an MCA registered charter boat, she was built by Tim Clark Boat Builders of Portland Dorset and finished to Colin’s precise specifications and launched in February 2011,

Flamer IV’s hull is an Offshore Pro-Charter design, her vital statistics are; length: 39ft x width: 12ft 6 inches, she is powered by a 450 hp turbo charged CAT diesel engine and has a very good cruising speed of 14 knots. An excellent feature is the centre well of the deck area for all tackle and kit to be stored to keep the decks clear and safe passage around the boat very important on days when the sea’s are a tad bumpy.

The deck space of Flamer IV is laid out for the convenience of the angling passengers with plenty of seating for all. There is also extra storage in the forward fore peak area for anglers spare rods, clothing, lunch boxes etc plus on board WC and plenty of hot drinks with quite an extensive menu, so a pretty well thought out charter boat with safety in mind.

I started off shooting some footage of the boat itself to highlights it’s design, safety and electronic equipment and show the ample deck space, good time to catch this in the early morning light makes for a slightly more dramatic start of the day images plus the boat is nice and clean too.

With the crew assembled, a mixed bunch of amiable guys many from a club in Wales and remainder individuals booked on board to make up the quota, I took the opportunity to introduce myself and show off some of the lures they had the option to try out.

We set off from the inner harbour on time and headed out to the first wreck approx 90 minutes steaming so time to get some more shots in the cabin of the skipper at the helm and all the electronic wizardry used for locating the wrecks and safety equipment like radios, engine monitoring equipment, GPS and depth fish finder kit.

With wreck one starting to show on the sounder the crew where made ready to drop their lines at the start of the first drift, I suggested they all tried their favourite chosen lures for the first few drifts and see how they performed and then change over to mine if they wish to. As the boat drifted over the wreck the first cry of Fish On was heard and one of the anglers was into a nice Cod with couple of other Fish On cries where heard so it looked like this wreck may prove to be productive and my camera was rolling catching the action.

Unfortunately the next few drifts produced very little fish so time to move onto another wreck and see how that one performed. Not too far to steam so the drift was setup using the skippers local knowledge of tide and winds albeit winds were low tides where picking up so moving onto and over the wreck was important to get positioning correct every time and the skipper was well switched on to achieve the optimum positioning.

First couple of drifts a few fish nothing spectacular and then Whammo !! Fish on shouted and then another and more as the boat drifted right over the Cod and the anglers found them apart from one angler sat in the corner of the boat and not getting any takes. Watching him fish as I filmed he was capable just the lures being used weren’t working on this day for him.

So I thought ideal a good candidate for one of my new awesome  eels and I suggested a two tone blue on one of my turbo eel jigheads and first drop guess what Bang he was in and landed a nice Cod, second drift and he was in again so not only was he happy so was I seeing the new lures performing and I was capturing it on film. His fortunes continued taking a fish a drift apart from when he caught into the wreck and snapped off. I had no problem supplying more lures to him and other crew members wanted to give them a try after seeing the results.

Fish where coming onto the boat fast and furious and many on my lures so capturing some great footage and the crew where well happy with the results. As the tide dropped away so did the fish and it was suggested changing rigs to try for a ling or three. Pouting and squid baits went over on basic large hook ling rigs and one of the crew tried my ling jigs loaded with a mixed bait. The boat was still drifting albeit slowly and the first take produced a nice ling aroud 15lb and that woke everyone up.

My ling jig didn’t get a shot as the angler unfortunately snapped off on the wreckage so that chance of footage was lost but other rigs where producing and couple more ling landed with one up near 20lb so those fish closed the day down and it was time to head back to Weymouth. Skippers mate Andy had a busy day landing numerous fish and providing tea and coffee for the crew and now he was setting up filleting stations for the crew to prep their catches on the way home.

With some cracking footage in the can and my lures getting a good outing and performing well for the crew it was a good result, skipper was happy in providing good sport for his party so all in all a great day and the weather stayed kind with just one very light shower. Quick word on rigs used the anglers used a variety with the flying collar being the most used of a tube boom and about a 1.5m trace to lure either hopped on the bottom or slow wind up around 10 turns and dropped back so staying in contact with the sea bed or wreck coming up and over as the skipper gave wreck showing info.

Others tried sliding ledger rigs or Portland rigs all with short traces, not only did they work well but it also reduced tangles to a minimum. Weights of 10oz and 12oz worked with the tides and kept rigs in touch with the Cod. On return to FlamerIV’s berth I hopped off the boat to capture a crew and skipper with mate group shot to finalise the video once edited.

All in all you couldn’t have asked for a better day to capture on film the crew enjoyed good fishing and as usual great banter so everyone went away happy with good bags of fresh Cod and ling with a couple of Pollock too for the freezer and I had enough footage for a good video and shots of the new lures in action. To book FlamerIV visit the skippers website for all the latest info and available dates or places for individuals trips plus you will see plenty of images and reports on how the fishing is: FLAMER IV BOOKINGS WEBSITE 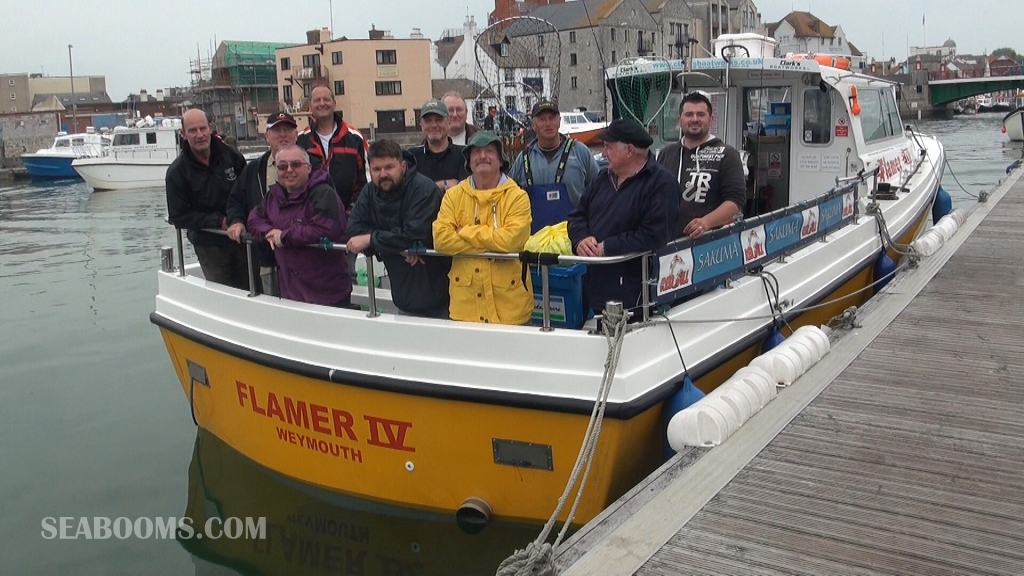 The video is available on my CATCHSEAFISH YOUTUBE CHANNEL along with a video dedicated to the lures used testing my awesome eels and explanations of their key features. I have also added the video here to watch so you can enjoy the day like we did. Lure range can be seen at my website SEABOOMS.COM and you can contact me for any advice needed.

Wreck Fishing on FlamerIV on the Cod.