Fishing Tails > All Articles > Reports > Chesil Beach > Winter Sea Fishing
How to catch Exotic fish on lures in the UK! How to Grill Fish 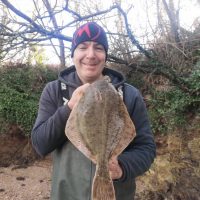 Winter sea fishing is all about Cod, Whiting and Flounder right? Wrong!! They are certainly the species most anglers automatically think of when the last flushes of autumn have gone and we face months of cold and wet weather. However it certainly doesn’t have to be that way, there are still loads of other species around especially ones like Bass, Wrasse and Pollock, which strangely enough are my three main species that I target on lures. I often catch most of my better Bass at the end of the year and if you are ever going to catch a bunker Wrasse, this is the time of year to do it.

I am not going to dwell too much on Flounder fishing in this article, as I have a full feature article on them for next week. Having said that I can’t ignore the fact that this year seems set to be one of the best years for Flounder in the South West for many years. Some Wonderfull fish have already come from some of the famous Devon estuary marks, with reports of fish exceeding 3 1/2lb. This 2lb 12oz Flounder was caught by Brett Annetts using lug and rag cocktail on a running paternoster rig. 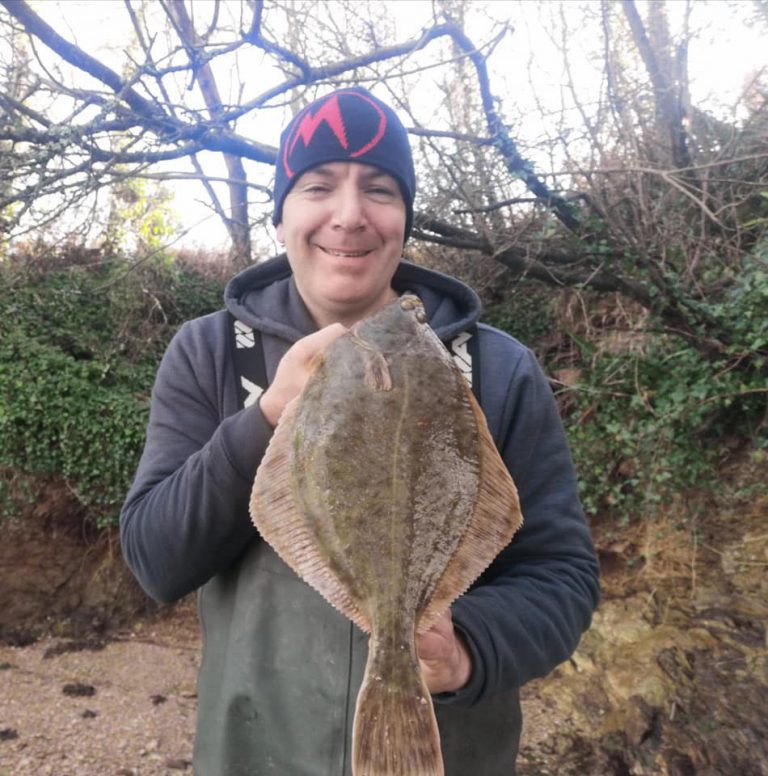 Enjoy the fishing for the next few weeks, because January and February are normally the worst two months of the year. Right now we are coming towards the end of the autumn bounty, but there are still large numbers of fish around including Mackerel and Garfish which proved great sport on light tackle. Try fishing with a small float or bubble float with 18-24 inches of hook length and a small hook, such as a size 6 Aberdeen baited with a small strip of Mackerel. Cast out and slowly retrieve. I would be highly surprised if you don’t have a Garfish or Mackerel hit your bait. You can fish from pretty much any location at the moment and catch them.

Rock Fishing: This is the time of the big Wrasse and the even bigger Conger. Pretty sure you can’t catch Conger on light lure gear, but I would love to give it a go! However you can still catch Wrasse on lures and boy do they put up a fight. Despite my love of lure fishing, I do have to concede the fact that most of the big Wrasse are caught on bait. At this time of year a lot of the smaller Wrasse head to deeper waters, where the water temperature is much more constant, leaving the large Wrasse to freely pick on the crab population. Hermit, Peeler and hardback crab are all equally effective as baits for the largest Wrasse. Personally I go searching for Velvet Swimmers or common shore (Green) crabs to use as bait, as I don’t feel the need to waste a quid a chuck with a peeler crab.

If like me you prefer to challenge yourself then grab your lure rod and some soft plastics and head to the an area with rocky gullies. I have had plenty of Wrasse in December and this season I aim to see if I can still catch them in January and February. One angler that I am certain will still be targeting them during those months is Virgis Ruksnaitis, who consistently lands some cracking fish on lures, such as this beautifully marked Ballan Wrasse. 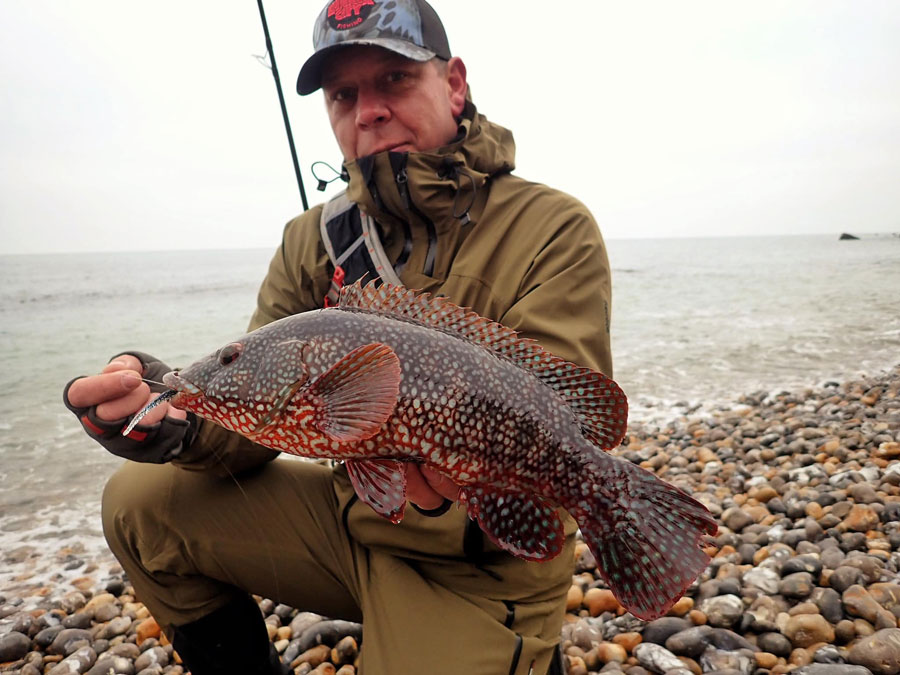 Light Rock Fishing (LRF): Although called light rock fishing, its not really about fishing from rocks, its about going light, having fun and taking advantage of the large number of species that live around our shores, especially the harbours. Whilst it is not exclusively a winter discipline, there does seem to be a larger uptake of it during the more barren months. For me it gives me something to aim for when a lot of our other species have moved offshore. I love catching different species and LRF is one of the best ways to do that. 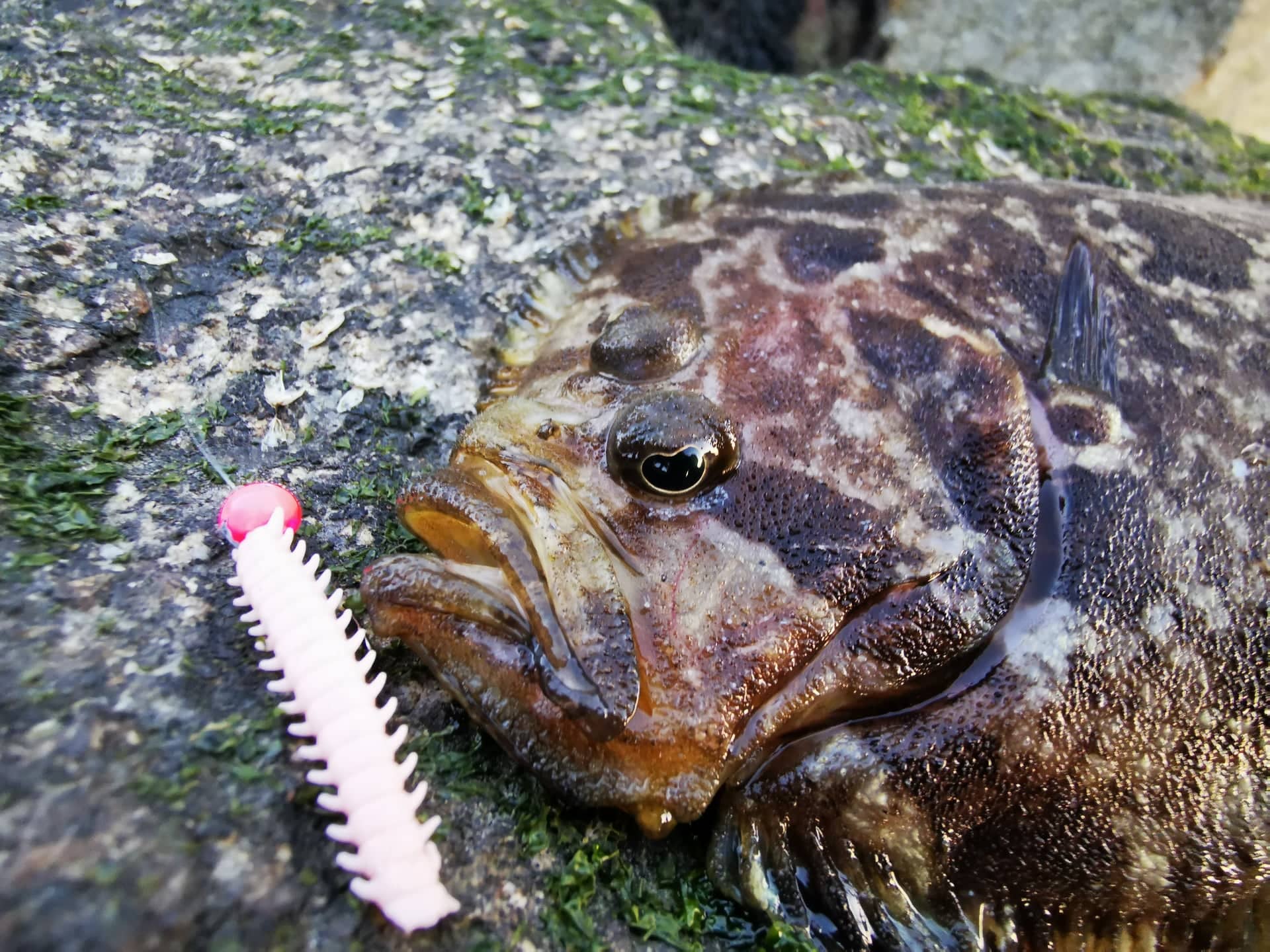 I have dusted down my LRF tackle and am even considering the purchase of a new rod which I will review if I decide to buy it. I have been massively encouraged by the results that I am seeing from some of the LRF regulars that post on Facebook. I won’t go into too much detail at the moment, because it is another article that I have planned, but if you do want to look at one of the best resources for LRF take a look at Ben Basset’s website

Live fishing show: Over the past few years I have wanted to do regular live video fishing broadcasts, but for one reason or another (mostly technology) I have been unable to fulfil that goal. Most of you won’t know that I I was struck down for quite a long time with Coronavirus. Thankfully I am pretty much fully recovered. One of the positives from that was I had time to research what was now around that would allow me to successfully start broadcasting and the good news was that I found a number of new platforms. After spending many many hours and investing heavily in new video equipment I finally managed to do my first broadcast, which went out last week.

I would appreciate it if you took the time to have a look and give me feedback. I already know that it could have gone much smoother and I could have been a lot less distracted, but I have solutions to those problems already. What I really want to know is what you all want. My plan is to do more tackle reviews, give information on how and when to fish different marks and spend time talking about rigs, tips and techniques. I want you to ask me questions during and even after the live sessions and I will happily pass on my knowledge and hopefully improve the broadcast each week. Take a look at the video below and let me know what you would like to see in future episodes.

Future fishing forecasts: For years now I have concentrated on providing a fishing forecast for the Chesil and Weymouth area. Mainly because that was where I was based and Chesil is one of the most popular fishing destinations in the country. I have decided to continue to do this, but I would love to add other areas of the country. If anyone would like to help with other areas by providing reports, I would love to hear from you. Just drop me an email to sean@fishingtails.co.uk

Chesil Beach: 10.5°C, 2.5m swell that is going to build overnight, but it should remain fishable for most of the remaining week. Friday will be rough and potentially unfishable, especially if you are not a great caster.

Portland: 2m swell on the West side, that will build over the next two days. The water is quite coloured and will remain so for the week.Portland Harbour: Wavelets with clear water

Chesil Beach forecast: With the wind being pretty constant the beach will remain quite rough and coloured. The wind will pick up overnight tonight and into early Wednesday morning. This should really stir things up and as the wind will drop considerably from mid morning, this makes for perfect Cod fishing conditions.

Expect plenty of Whiting, Pout and Dogfish on worm and fish baits .The Cod have been coming on Lugworm, Squid and live Peeler Crab baits.

SUBSCRIBE
How to catch Exotic fish on lures in the UK! How to Grill Fish