Fishing Tails > All Articles > Reports > The terror of the drop-off: giant dogtooth in Tanzania
Plymouth Fishing report It is so good to get out and fish 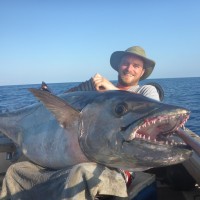 The terror of the drop-off: giant dogtooth in Tanzania

Of all the species of fish in the world, there are a few that haunt me more completely than their peers, that always seem to be there, holding station in the currents of my dreams, rolling and flashing in the dimly lit recesses of my subconscious. The roosterfish of central America, with its elegance and speed; the yellowfin tuna, for the thrill of the chase; the ballan wrasse, permanently reflecting the kelp-swirled gullies of my sun-dappled childhood.

But perched above them all for me is the king of the reefs, the emperor mackerel with the wolf’s head: the dogtooth tuna, terror of the drop-off. Of all the large reef species, they are probably the hardest to bring to the boat. When hooked, their first instinct is to make an enormous, searing run, almost unparalleled in its ferocity. Not only are they quite capable of emptying a spool in that first dash, but also if hooked near a place where the reef drops away, they will head for the depths, cutting the angler’s line on the coral. As if this wasn’t enough, they also have sharp teeth that can cut through heavy nylon or a Kevlar assist cord, and when nearly subdued are a popular target for the local shark population. 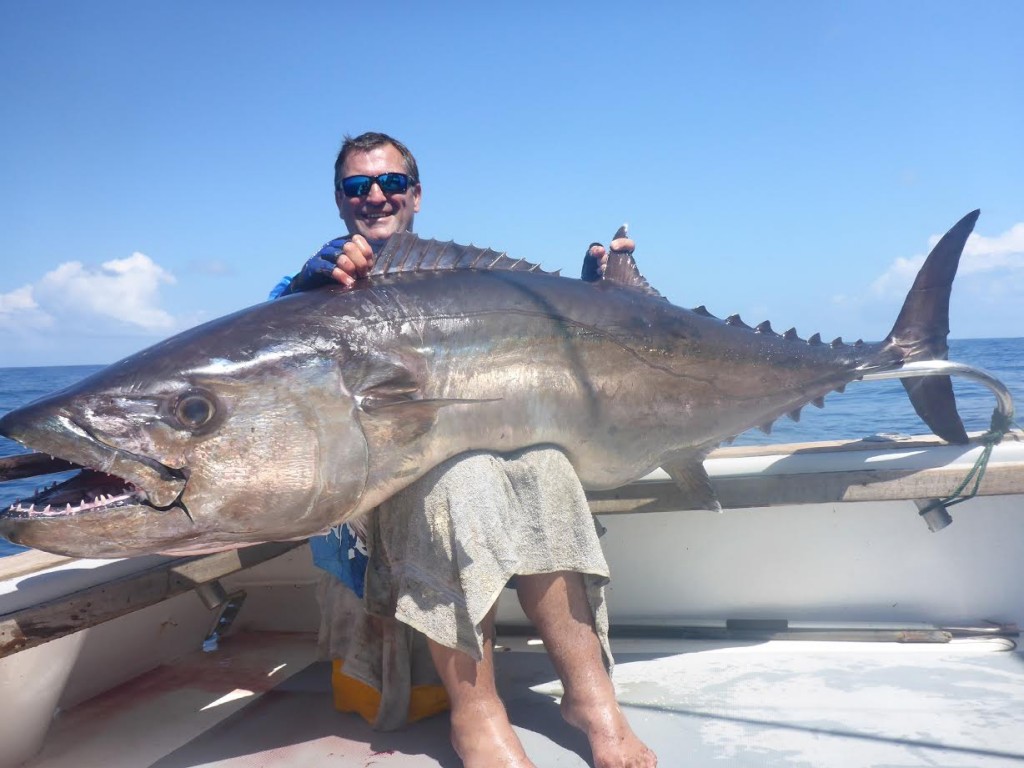 My good friend Jon Patten and I have both wanted to catch a big dog for a number of years now, and we had both been picking up occasional reports of huge fish being caught from Latham Island, a small sandbar and fringe reef complex, 35 miles off the coast of Tanzania. In each case, the same names seemed to be coming up in connection with the monster fish: Jason & Mady, a husband and wife team of fishing guides based out of Dar Es Salaam.

We contacted them via email, and they kindly agreed to take us out to Latham for a couple of multi-day trips, and to try and put us on the big doggies. With a few months to go before the trip, a period of frantic research ensued: jig recommendations were sought, lines tested and selected, reports scanned hungrily for any suggestion that might give us the edge over these difficult fish. I had caught a few on jig before on a previous trip to the Seychelles, but had only landed them to around 50lbs, the larger ones always escaping: pulling the hook or cutting my line.

Our trip was to consist of two excursions to Latham. The first consisting of an overnight trip trolling for broadbill followed by two days at Latham with a night on anchor in between, and the second, following a much-needed rest day, comprising three days at Latham, with two nights spent on anchor. Pick up and drop-off for each trip was from a small bay next to our Lodge, the Amani Beach Hotel, which was well-appointed and picturesque, with friendly staff and good food.

On arrival in Dar, we were met at the airport by our driver Juma. He took us straight to the lodge, where we had an evening and most of the following day to unwind and to prepare our gear for the coming days’ fishing. The next evening, we were driven to a local beach, and after a slightly spooky dinghy ride out over the reef made rendezvous with Jason and Mady on their boat. The gear and provisions having been safely stowed, we were off on the first night of our adventure.

Tanzania has a truly world-class broadbill fishery, with most fish being caught while trolling at night, using skirted ballyhoo, cyalume glowsticks and flashing lights.

I’m not usually very keen on trolling, but this was very exciting fishing: chugging along under a mesmerising canopy of stars and an almost fluorescent moon, shooting stars and satellites arcing overhead, lights flashing eerily in the water behind the boat. 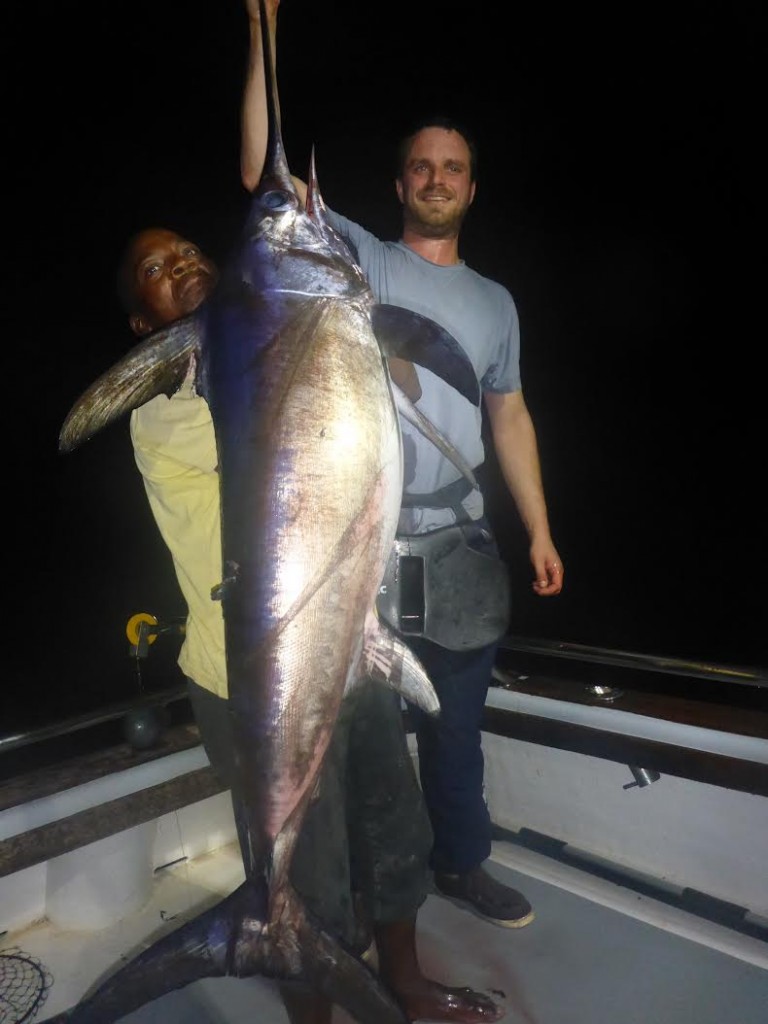 We went two from three strikes, a smaller 80lb specimen for me, and a larger fish of just under 200lb for Jon, which took him around 2 hours to bring to the boat on standup gear. It’s worth noting that conditions here weren’t optimal, with the new moon being preferred. Jason told us that on a good night they could get upwards of 30 strikes. But of course both of us were very happy with the result, as it was a PB for Jon, while my more modest fish was a complete first for me. 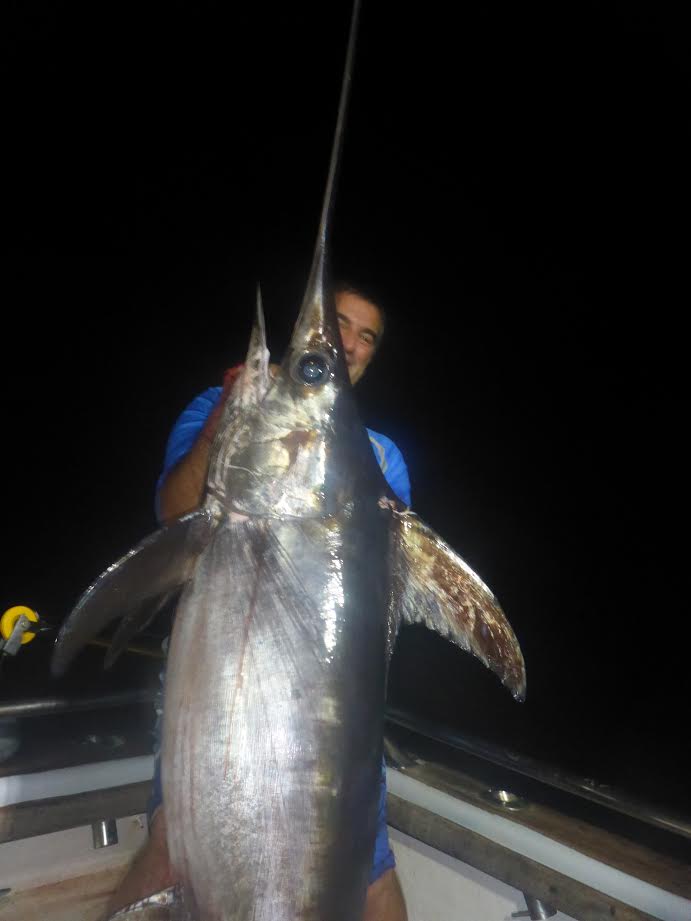 The next day was spent on a mixture of jigging and livebait fishing. As Jason had warned us on the way out, the jigging in particular was unusually difficult for the time of year. Despite spending a fair few hours in various locations, we had about 5 hookups in total, which converted to two fish: a dogtooth tuna of around 50lb, and a ruby snapper. I managed to lose two nice doggies: one to a failed hook hold, and the other to sharks. 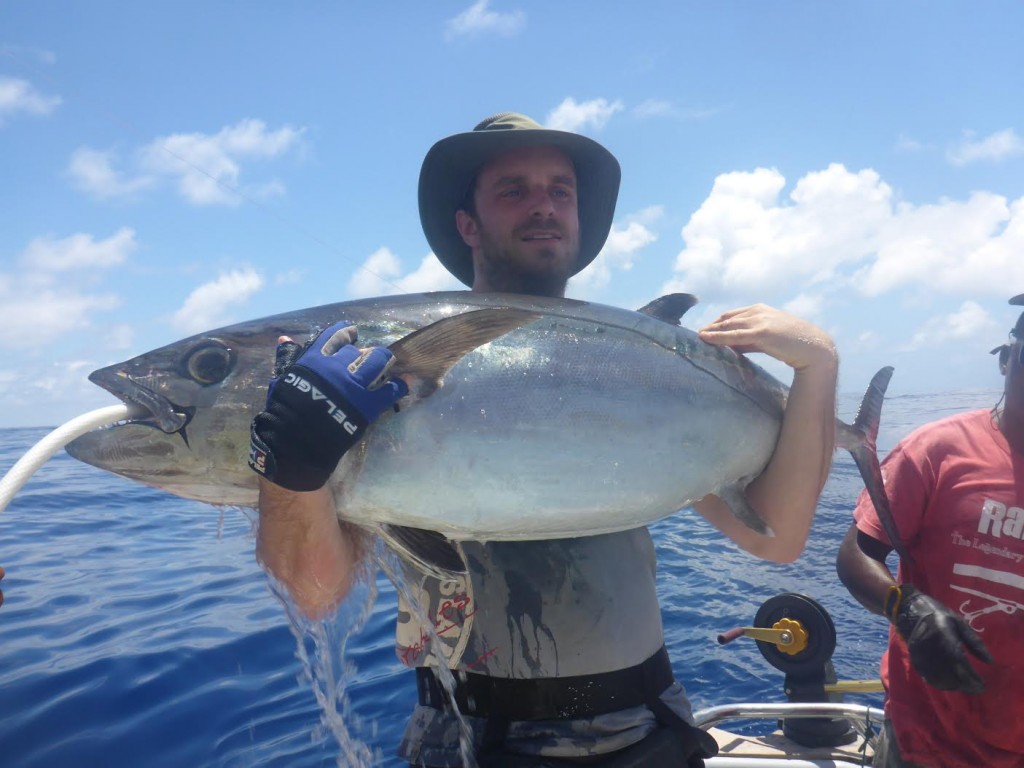 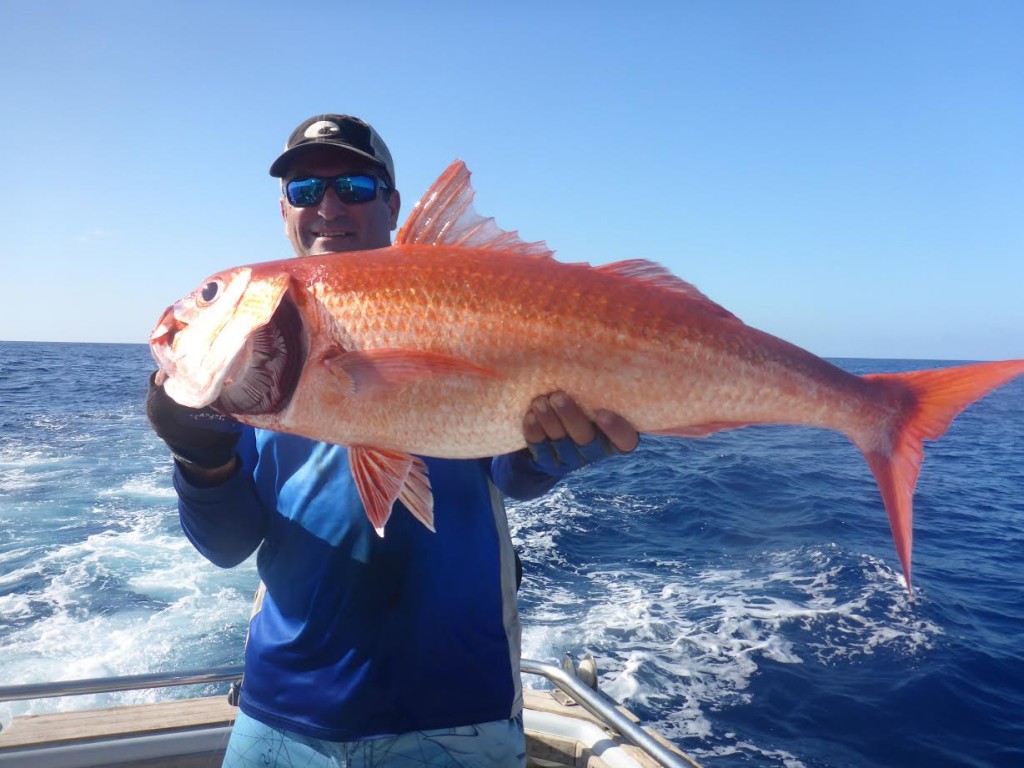 The process of bait fishing consisted of trolling around the reef for rainbow runners or bonito, and then slow trolling these on a downrigger along the drop-off. Bait was incredibly hard to come by. Despite fish being visible on the surface all over, they were preoccupied with small bait and by and large ignored the trolled lures. Eventually we managed to snag one and dropped it down. We got a hookup within a few minutes and after a tense half hour battle it proved to be the fish of the trip, and possibly of a lifetime for Jon: an incredible dogtooth tuna of 107.5kg, beating the current all tackle IGFA record by a couple of kilos! 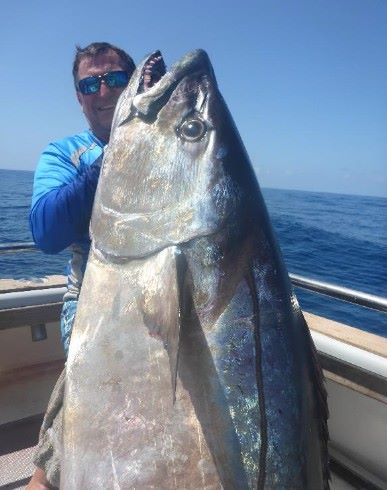 The night was spent on anchor, with Rappalas streaming out in the current while we slept. These took a single yellowfin of around 20lb, which became dinner.

The next day was relatively similar to the previous: a mixture of jigging and livebaiting. The jigging was even worse on this day, without even a strike all day as far as I recall. We managed two smallish dogs of around 50-70lb on livebaits, along with a small GT, as well as a few lost fish for Jon including one which nearly peeled the entire topshot off an 80W Tiagra before cutting him off. Theories included black marlin, huge doggie or large hammerhead. 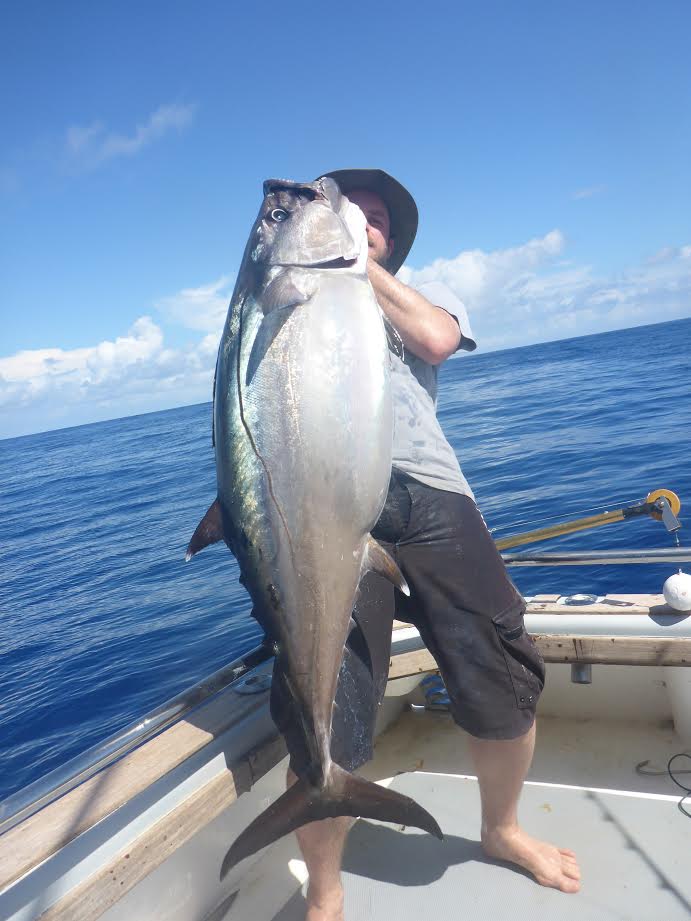 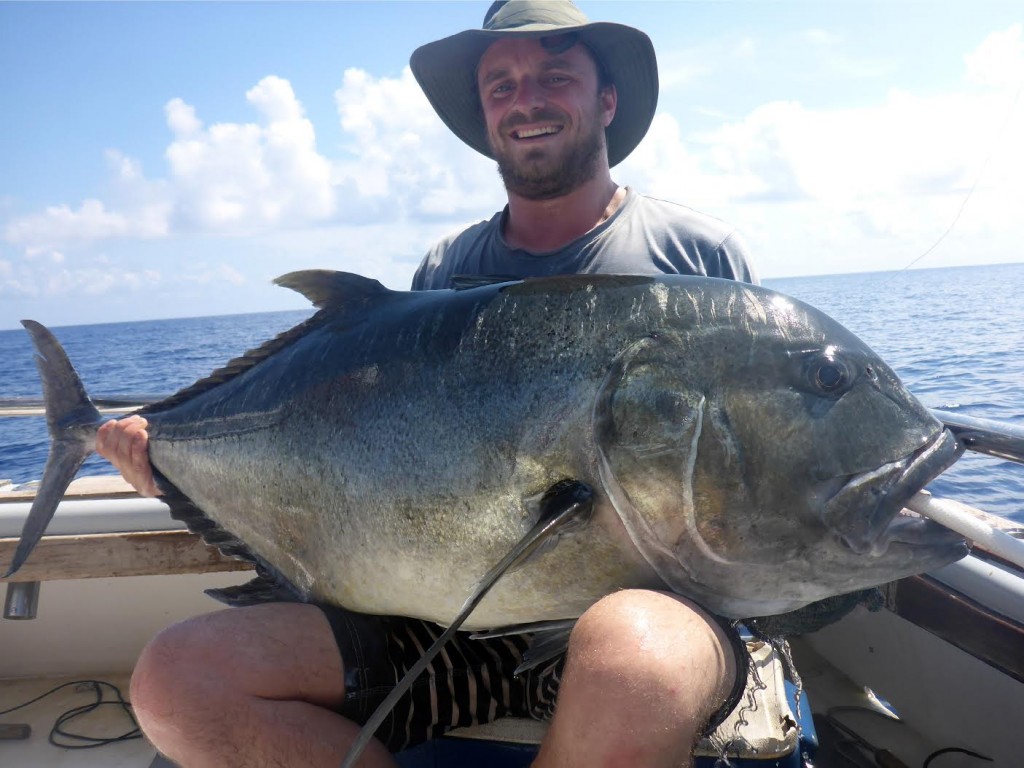 In the evening we returned, exhausted, to Dar, high speed trolling along the way. This produced a couple of wahoo and a couple of Dorado.

After the rest day, we returned to Latham for the second three-day trip. The jigging was generally still slow, especially during the day, though each evening it would improve for a couple of hours and we took a variety of jack species, including bigeye trevally, rainbow runner, black jacks, and small GT. 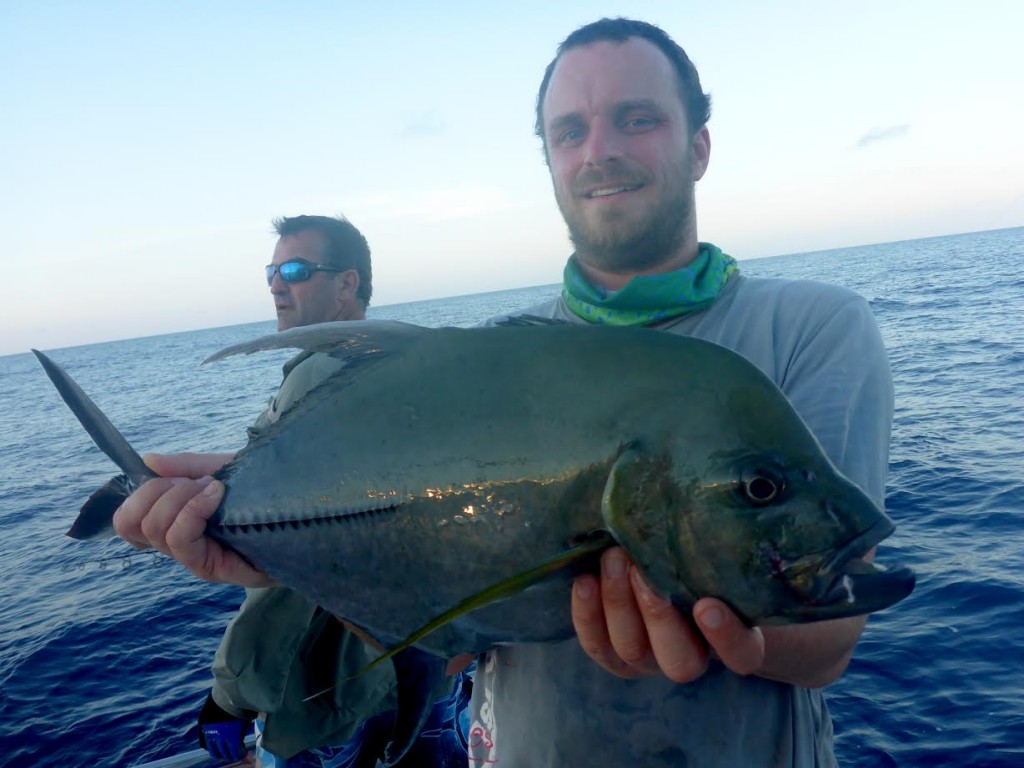 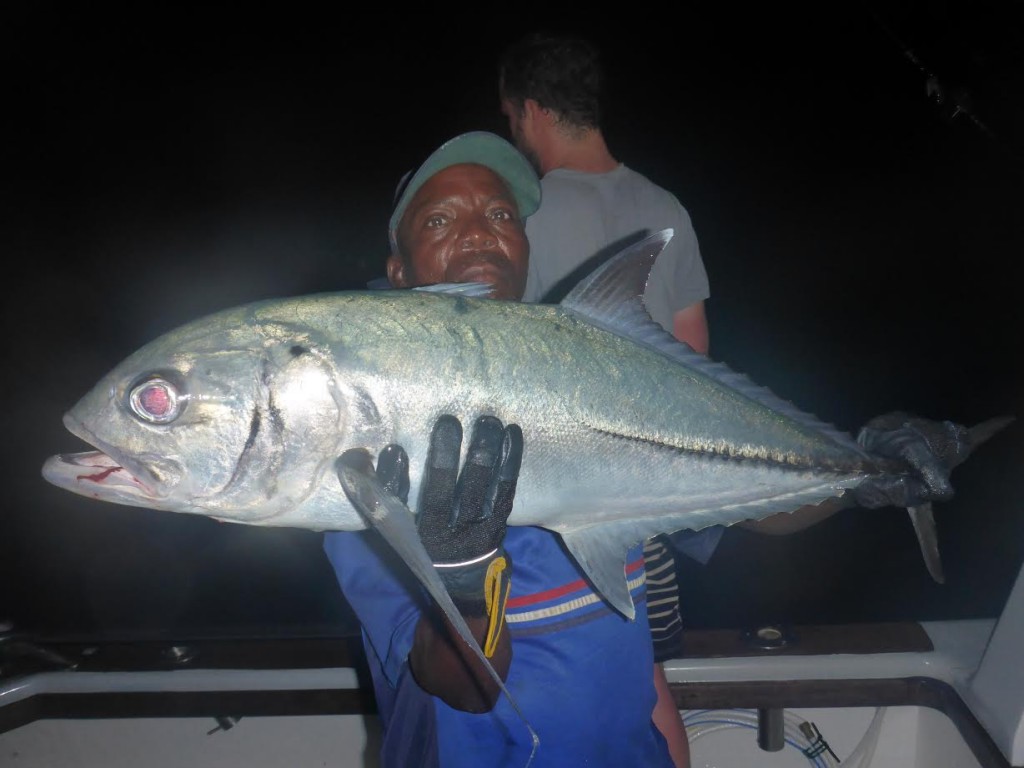 Livebait availability was pretty patchy, tending to poor, though midway through the first day we found a floating FAD, which provided us with a couple of small almaco jacks and a couple of juvenile yellowfin. Each of these when sent down produced a run for us, though several didn’t convert to fish. One did however, and proved to be a trip-saving fish for me: a second enormous doggie, only slightly smaller than the previous: a fish in the 90-100kg class, around 95kg. 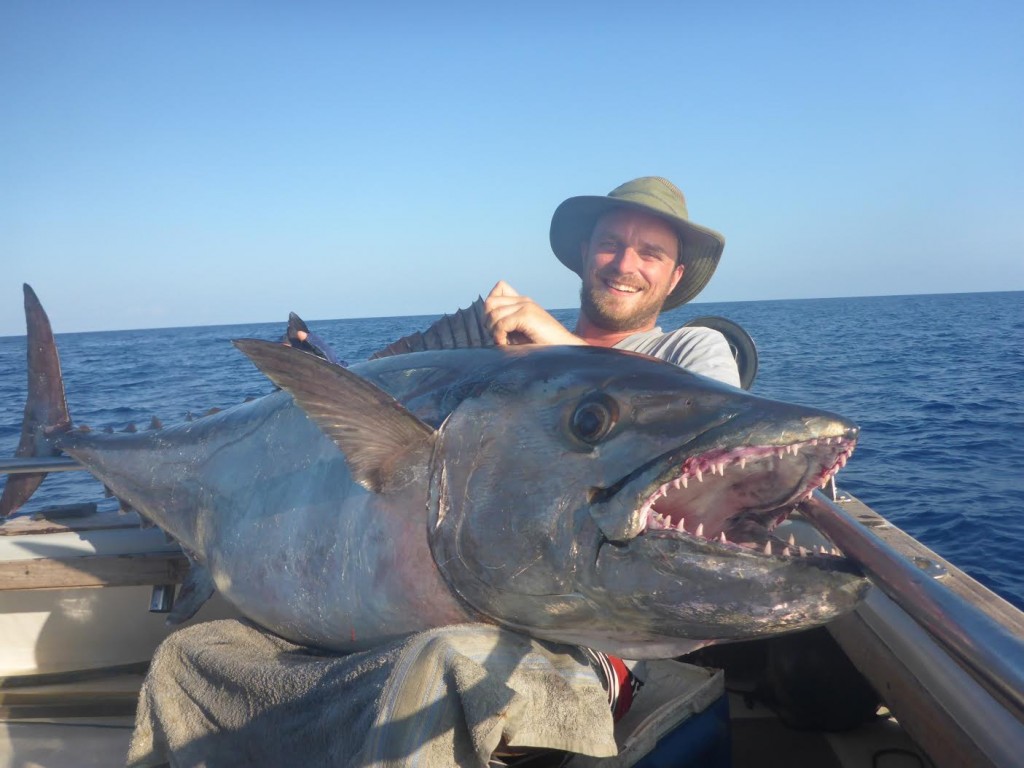 Having both caught large dogs on bait, we were still very keen to have a decent shot at one on jig.  Jason and Mady therefore decided to sneak us off to one of their secret marks, where we did some jigging in very deep water, and had one of the most intense times I’ve ever experienced in fishing.

Hooking and landing these fish on jig is considerably harder than doing so on standup gear with bait, and the task was made far harder by the depth of water and strong currents at this location. In three drops I hooked, and lost, three enormous dogtooth tuna, while Jon lost two of a similar size.  Our guides were certain that most of these fish must have been in the same size class as the ones we’d caught on bait. Two of my three got torn apart by the taxman: one almost at the boat after a long and violent battle, while the hook pulled on the third (by the fight we thought it might have been fouled). Jon’s met a similar fate, with one falling to a shark and the second apparently chewing through the assist. Despite the defeats, this remains one of my most exciting experiences in fishing. Nearly getting spooled so many times in an afternoon on heavy gear is quite an adventure. 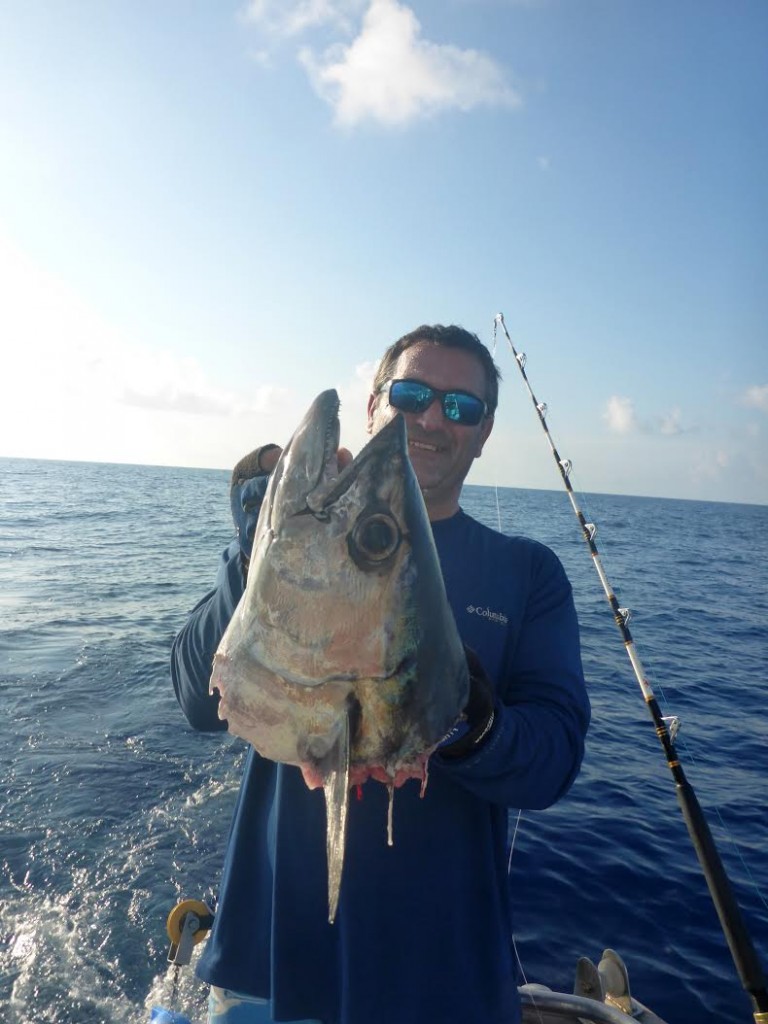 On the final day, we did mainly livebaiting, though we did jig for a couple of hours in the morning and Jon winched up a couple of disembodied heads, after the “HMRC” had taken their cut. The livebait work resulted in a decent GT each and a hammerhead for Jon. 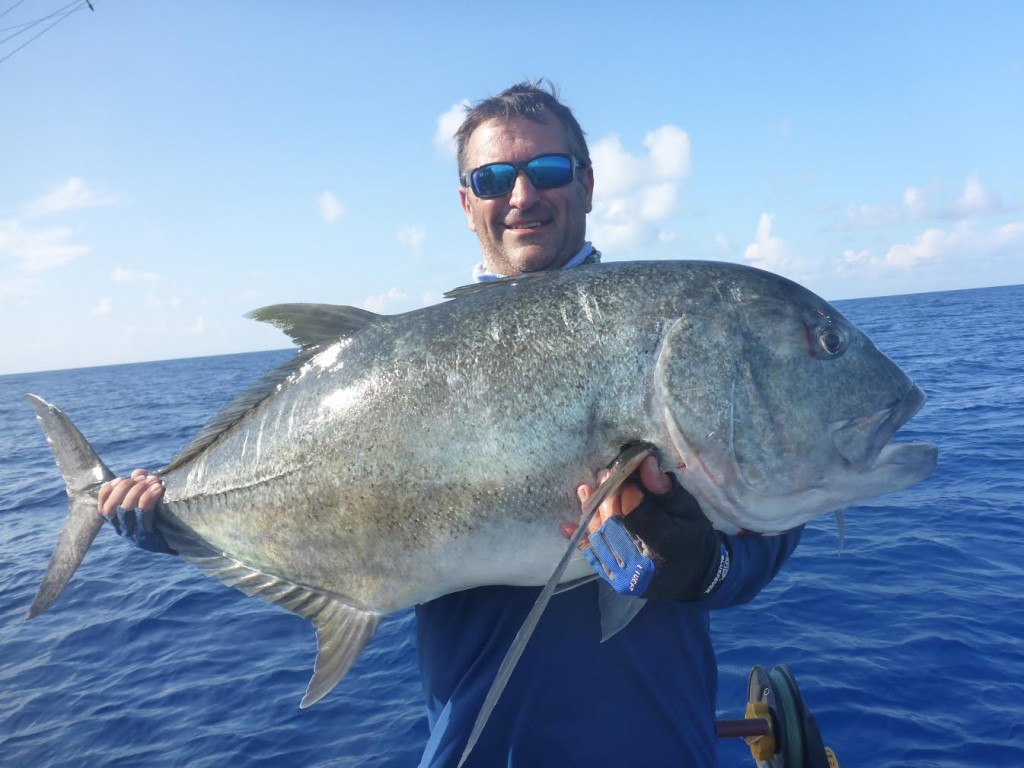 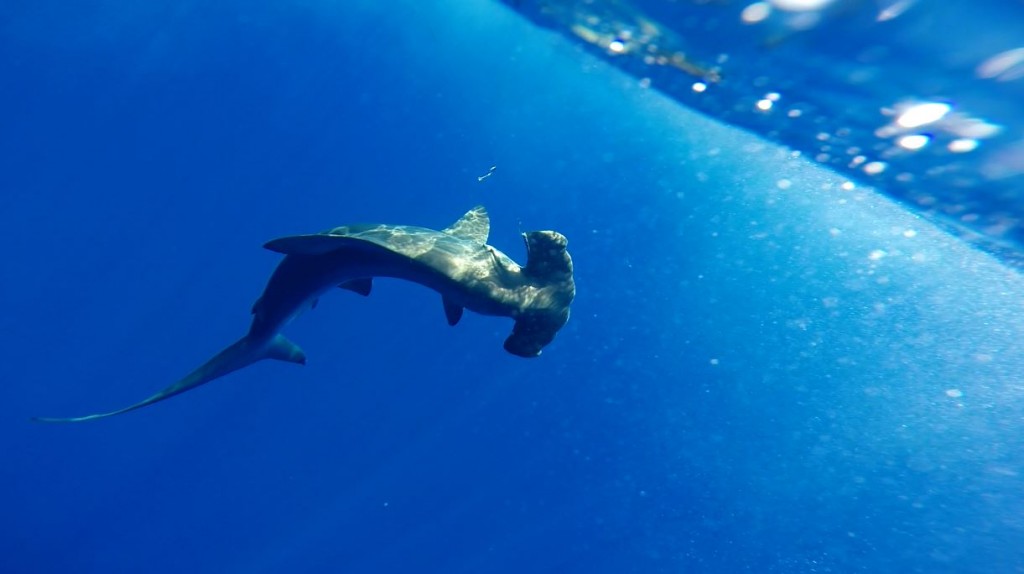 All in all, a very satisfactory trip, despite the difficult conditions. Jon and I are already booking up for our return trip in 2017, so watch this space!