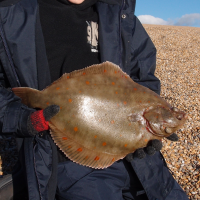 It was no surprise to me that there were not too many Cod caught over the weekend. Cod fishing on Chesil has slipped back into the normal pattern of 1 Codling for every 50 anglers, and you can bet that most of those Cod came from very specific marks.

What has come as a bit of a surprise is the number of flat fish that have been caught recently. A number of reliable sources have reported a lot of Sole from West Bexington, both at night and during the day. Several large Plaice have also been caught from Abbotsbury and Cogden. With settled weather and light winds forecast for the next few days at least, conditions for Sole and Plaice fishing are ideal. A very different approach is needed for both species. The Plaice are likely to be at distance and are normally caught during the day. With small tides, you will need to use long flowing traces, with size 1 or 1/0 hooks. Best bait at this time of year will be Ragworm, tipped with a small strip of Squid. 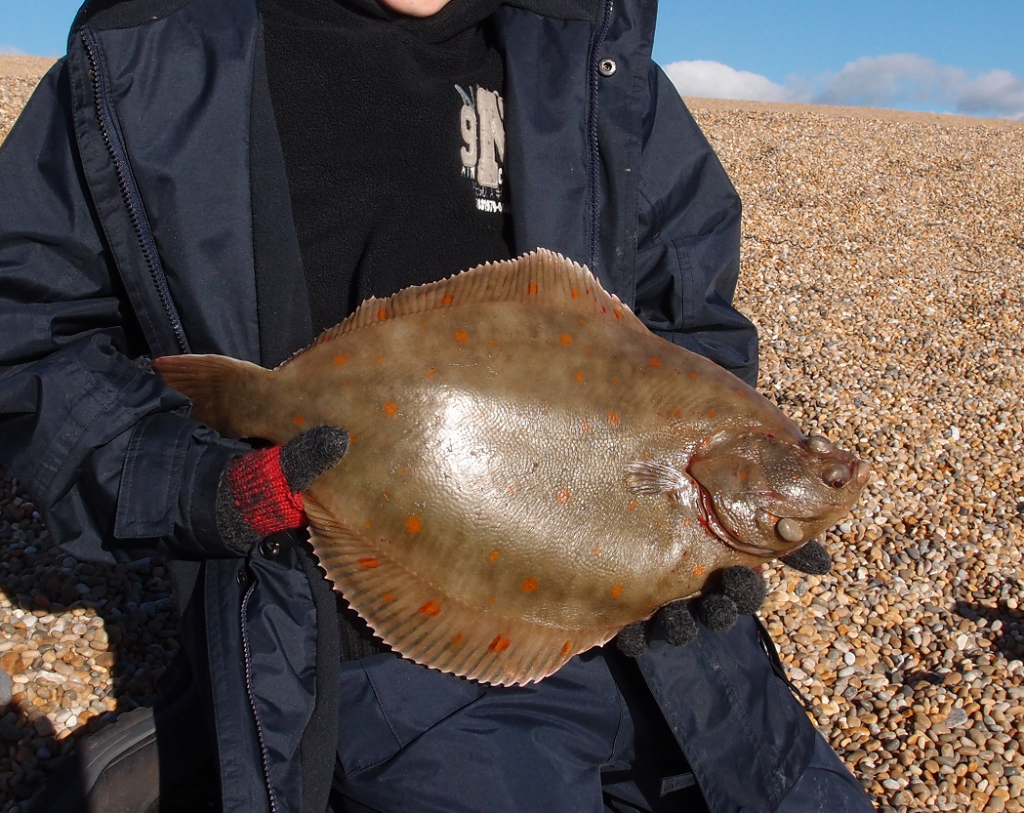 A nice late season Plaice, from this time last year

If you want to target Sole, then keep your casts short. They are often no more than 40yds out. I prefer to use a 3 hook flapper rig, baited with blow lug on size 4 hooks. Keep your rod tip as low as possible and allow some slack line. You might be mistaken in thinking that Sole will produce small bites, like Flounder or Dabs; they don’t. You wont miss a Sole bite, for their size they give a huge bite.

It looks like it could be a good winter for Whiting, as loads have been caught over the past couple of weeks. Night fishing is normally the best time for them, when they will often come in very close.  A simple 2 or 3 hook flapper rig baited with Ragworm and a strip of Squid or Mackerel, will keep your rod tip rattling all night.

Chesil Beach forecast: The water temperature has plummeted over the past few days, but despite that there are still Mackerel and Garfish being caught. Night tides are producing plenty of Whiting, Dogfish and Pout. As mentioned earlier, there have been plenty of Sole coming from the Western end of the beach, as well as some large Plaice from the same marks.

Portland: Portland is fishing very well at the moment, with some lovely big Wrasse coming from all over the Island. I watched a couple of anglers pull in several Wrasse over 4lb in a short time, from Pulpit Rock. I wasn’t brave enough to get up there and take some pictures. I don’t mind heights too much, but that mark is just a bit too exposed for me.

Church Ope Cove will be good for Pollock and Wrasse during the day and Sole and Whiting at night. It can be a bit of a tackle graveyard, but if the Sole are there, it can be well worth the effort.

Portland Harbour: Small tides, normally means that the harbour will be quite with the exception of Flounder and the odd small Bass. It is a good mark to try with a baited spoon for the Flounder.