Fishing Tails > All Articles > Reports > It’s all about the Bass. The reality of a 6 month ban
Deviltail Eels and Shads development Flounder and flying gaff’s 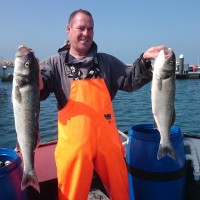 It’s all about the Bass. The reality of a 6 month ban

If there is one subject that has created more interest in sea angling this past year, it has been the changes in the laws regarding Bass fishing. The European Parliament and the Council on the common fisheries policy, met on Monday and Tuesday this week to consider a number of proposals on the conservation of marine biological resources and the management of fisheries. These resources included shellfish and species such as Cod, Hake, Haddock, Plaice, Sole and most importantly to the recreational angler the Bass. The objective of the common fisheries policy is to ensure that we have sustainable stocks of  fish for the future. Since 2009 the commission has increased the number of species allocated Total Allowable Catches (TAC’s) for Maximum Sustainable Yields (MSY) from 2 to 36 in the Atlantic, Baltic and North seas. The MSY is the amount of breeding stock that is required to ensure the species not only survives but thrives, after the catch allowance has been met. As anglers we have seen a direct result of this in the increase of Cod and Plaice catches over the past two years.

In this article we are going to focus on the changes to the policy that affect Bass fishing and try and put into simple words, what this means for the recreational angler. 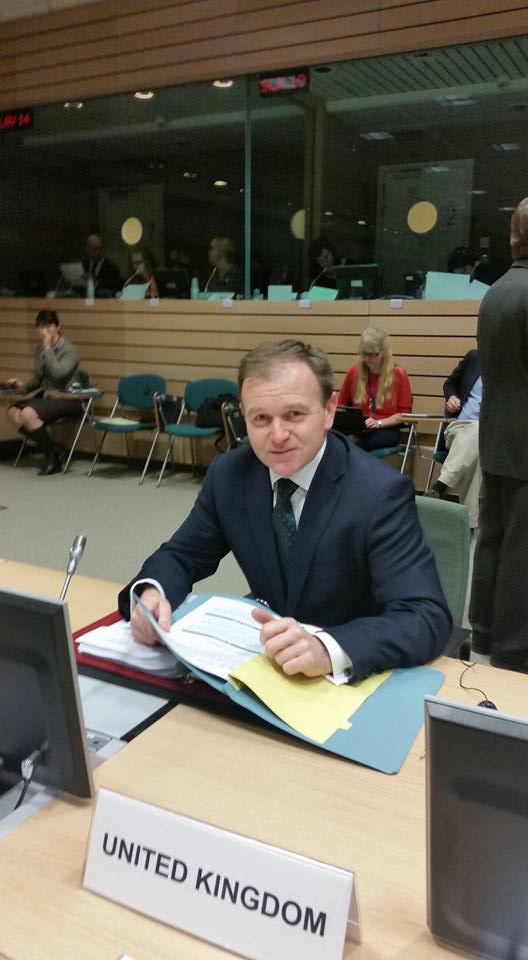 Our representative for the UK was fisheries Minister George Eustice, MP for Camborne and Redruth in Cornwall. George Eustice was able to secure a number of concessions and amendments to the original proposals set out for the meeting. The original proposal suggested a total ban on Bass fishing for the first six months of 2016. This included all commercial fishing and a total ban for recreational anglers. After the six month period recreational anglers would only be able to take one Bass per day. The rules for Southern Ireland were to remain the same as they currently are with a limit of 2 Bass per day.

Commercial fishing will be restricted to low impact fishing for the first six months. It is unclear at this point exactly what is considered as low impact fishing. It is believed that it will be a measure to allow under 10m rod and line boats such as the majority of the Weymouth Bass fleet to continue to operate during this period with a catch limit of 1.3 tonnes per month. It is also believed that it will allow under 10m Gill Netters to operate for part of that period, but not during the main breeding months of February and March.

Larger vessels  will be allowed to land by-catches concerning demersal trawls and seines up to a maximum of 1% of the weight of the total catch of marine organisms on board. This is in line with the current regulations to prevent fish that are already dead, being dumped over the side because they are not allowed to land them.

Since the announcement yesterday, the new regulations have been the hot topic on social media. Many anglers are very distrustful of commercial fishermen, blaming them and foreign commercials for the dwindling stocks. The UK commercials blame the Spanish and French and I am sure they have the same opinion of the British. Let’s take step back and acknowledge that the bounty of the sea is a harvest that we can all share if we manage it carefully.

I spent a large percentage of last year working as a commercial rod and line Bass fisherman on a number of under 10m boats operating out of Weymouth and Portland. As a Bass fishing guide I got a fair amount of stick for sleeping with the enemy. Part of the reason I chose to fish commercially was to find out what it was like to be on the other side. Where your livelihood depended on you getting out in weather that was sometimes just too close to dangerous, so that you could put food on the table for your family. I wanted to see if undersize fish were returned and how  much fish was actually landed by one of the largest of the low impact fishing fleets in the UK.

The days were long, exhausting and often dangerous, but like most of the other fishermen, to me that was part of the attraction of the job. Over the past few days I have read that the 1.3 tonnes that each of the under 10m boats are allowed swallows up a huge amount of the Bass stocks and how that as commercial fishermen, they have made the choice to rape the seas of its bounty, so pleasure anglers don’t care if they suffer financial hardship and loss of livelihood. I want to set the record straight for these fishermen. 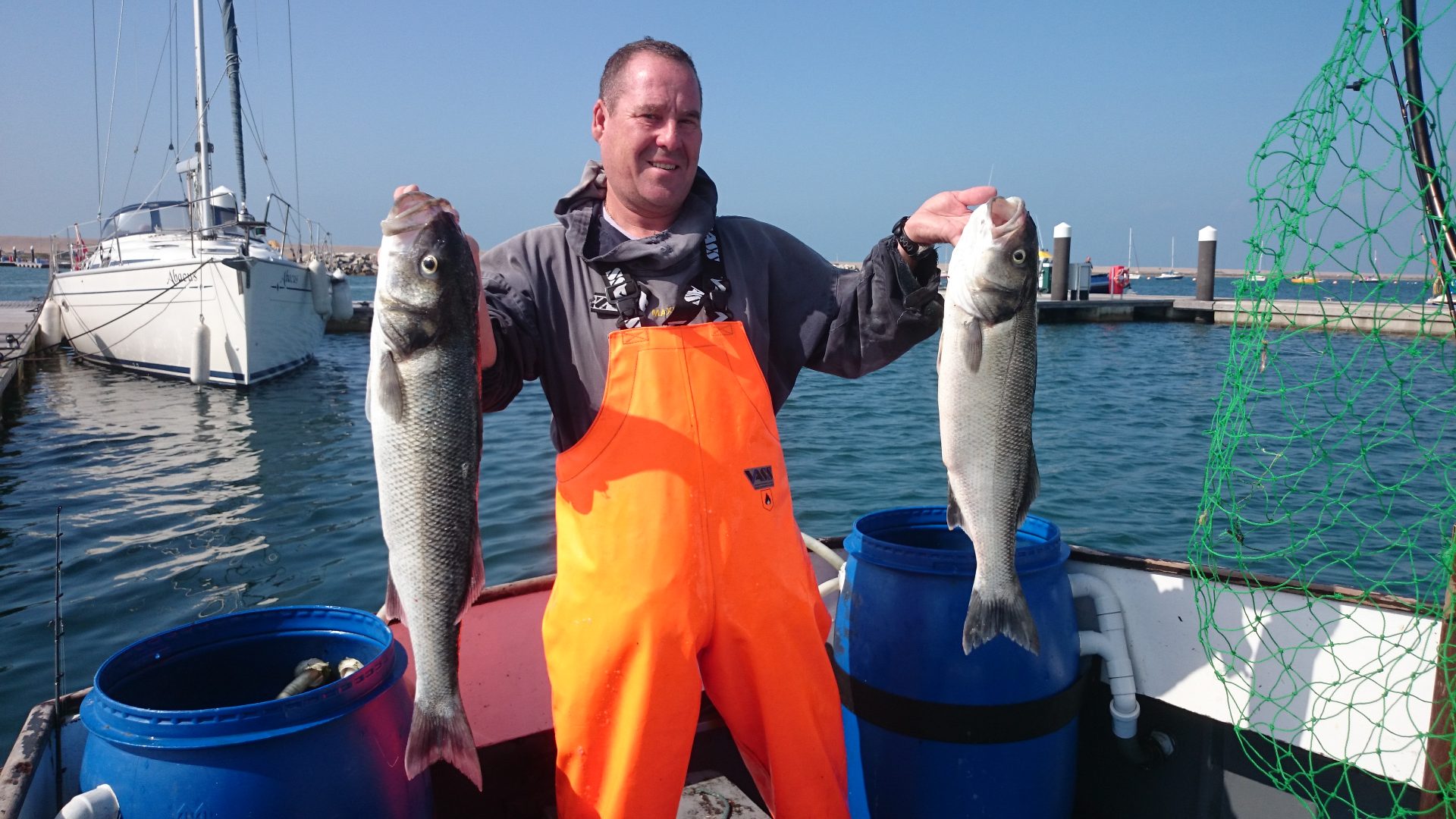 Most rod and line Bass boats don’t even catch a tonne a month. Unlike pleasure anglers they are heavily regulated and frequently checked by the inshore fisheries patrol boats. If a Bass is even questionable on size it it returned. The average Bass fisherman is a share fisherman and makes around £4 per kilo of fish that they catch themselves. If they make £2000 a month that is normally an exceptional month. Never mind the months between February and May that they don’t even go out at all because of weather and the fact that the Bass have moved to the South West approaches to breed.

It is once the Bass are in their breeding areas that they are targeted by the netters. Even the under 10m Gill netters are landing in excess of a tonne a day on some days. Not to mention what the Pair and Seine trawlers are hauling up every time they shoot their nets.

Do I think the commission has done enough and this is good news? I think that it is great news, but I would like to see a full six month ban on all netting

So back to the issue in hand, what does this really mean to the pleasure angler? I want to take a few questions that I received via social media yesterday and answer them:

When does this come into force and does it affect all of the UK?

It comes into effect from the 1st of January 2016 and it covers all of England and Wales. Parts of Northern Ireland and Scotland are not covered under the ban. We will update the information with a map once we have full clarification of the areas.

Ruari Taylor writes: So what should you do if you catch a bass and its swallowed the hook, and it’s not going to survive or will be dead by the time you get the hook out. still put it back to suffer and slow death, or dispatch it humanly?

Ruari I am afraid that unlike the commercials we have no bye-catch allowance. You will have to return the Bass even if it is dead. A way to help combat fish fatalities is to use barbless hooks. If you are lure fishing then it would be a good idea to consider removing your trebles and going for single barbless hooks.

Mark Loader commented: this will never work – most people don’t even know there is a size limit so if maybe 5% of anglers know the rules it will make very little difference

In a recent survey that we carried out it was clear that less than 50% of anglers were aware of the size limits of our most common species. The graph below shows that many anglers do not even know that there is a Minimum Landing Size (MLS) for Mackerel, our favourite summer species. The MLS for Mackerel is currently set at 30cm (Ed: 30cm North Sea 20cm other UK waters ) 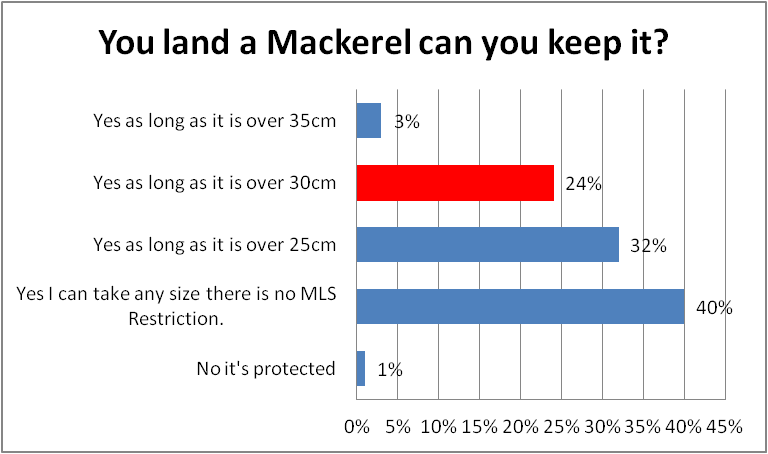 This is an issue that must be addressed. Fishing Tails continually try to educate anglers in size limits and the number of Bass that they are allowed to take. Organisations such as the Angling Trust and B.A.S.S that are funded by anglers for the preservation of future angling should step up and take responsibility for creating a campaign that will better educate existing anglers and newcomers to the sport.

Jan Griffiths makes a passionate comment:  If it’s purely catch and release for recreational anglers (which I don’t agree with in the current/proposed format), then surely catch, photo and release should also be banned as reduces the chances of fish survival? Get those bass straight back in the water, you really don’t need that egotistical self-publicising photo!

Most predators tend to be tough fish and if you handle them carefully and be quick about taking a picture, I don’t see any harm in it. I think it would be a bit of a boring world if we didn’t get to see the increase in size and numbers in a picture format, of the fish that we are trying to help prosper.

Adrian Crawford ask’s: How will the ban be enforced?

There are strict measures in place for the commercial sector already. The main problem is that no one seems to know who is responsible for policing it amongst pleasure anglers. This in reality should be down to Fisheries protection. In these times of austerity, where is the money going to come from to fund the increase in budget needed to enforce this?

Gavin Meade emailed me: How long will it take before we see the results of the ban and how long will the ban be imposed?

As Bass are such a slow growing species it is unlikely that we will see any significant changes to the numbers for a couple of years. The trawling ban imposed earlier this year will help. It believed that as the Bass increase in number and size the TAC will be increased. This should benefit everyone in the long run.

An angry Charlie Taylor posted on Facebook: i am really not fussed about how much fishermen earn. If its crumbs…then get a different job. It just adds more weight to the argument that the majority of the public shouldn’t be punished just so a few can scrape a measly few quid together by depleting our fish stocks.

Harsh and passionate words Charlie, but the reality is that no one group should have a monopoly over the fish stocks. We all should share and work together for a better Bass fishery that we can all enjoy in a few years time, whether that is through our passion for angling, or making a decent and honest living.

We certainly have a hot topic on our hands and we want to hear your opinion. Leave a comment in the comments section below and tell us what you think. I want to leave you with something to think about.

It matters not if they are foreign, or come from our counties

We need to move on and work with our neighbors

The stocks and the shoals, we can save with our labours

Commercial or pleasure, boat or shore.

One thing is certain we want to see more

An ocean of species, rich and diverse

This fighting amongst us, is only perverse

To look to the future, we all must unite

Against greed and stupidity, we all must fight

Survival of them all, is our only goal

35 Responses to "It’s all about the Bass. The reality of a 6 month ban"