Fishing Tails > All Articles > Reports > Chesil Beach > Am I the only one fishing Chesil Beach?
Just one half decent fish is all it takes, to keep you hooked. Where are the fish? 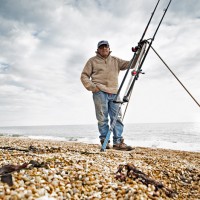 Am I the only one fishing Chesil Beach?

I know I am not the only one fishing Chesil at the moment, but I seem to be one of the few that is fishing down the Portland end of the beach. A few hardy souls have been out at West Bexington and Abbotsbury, but with the exception of some Dogfish and Whiting, very little has been caught.

One thing I have noticed is that there seems to be more Bass on the South coast than Cod. Normally when the water temperature reaches 9°C the Bass head of out to the South West approaches to breed. So far they have not shoaled up there, as the French Trawlers that normally massacre them at this time of year are coming back with almost empty holds.

I have been keeping a close eye on what has been happening in other parts of the South coast, as certain marks give good indicators as to when to expect different species to arrive on Chesil. I was down in Brighton on Monday, where I went to check out how the Plaice fishing was going down there.  Because the water is very coloured in that area as well, it was hard to get a true indication of the Plaice fishing. However I did see a couple of anglers take a few thin looking Plaice. A good indicator that the Plaice will start to arrive on Chesil in about 3 weeks time.

The next question is where on Chesil will these Plaice turn up? The beach has been changed so much it is hardly recognisable. The picture below that was taken by Nina at Underwater Explorers, shows an almost sandy beach at Chesil Cove. Those of you that know Chesil Cove, will know that it is normally where the largest of the pebbles are on Chesil. Now it is a mixture of some pebbles, clay and course sand. If you want to see more great pictures from Underwater Explorers and Chesil Beach have a look at their Facebook page Chesil Beach Watch

Fish are startign to show in other areas such as the Bristol Channel and the Solent. Reports say that a number of marks in the Channel are so full of small Codling, nothing else is getting a chance to get to the baits. This is great news for the future of Cod fishing. Thornback Rays have started showing in the Solent, with some double figure fish coming from Lee-on-Solent and Hillhead. I will ask Lorraine our Solent contributor if she will write and article on the Ray fishing there. It is with great pleasure that I can announce  Lorraine Lolly Perry has been selected for the women’s England shore angling team. We wish her all the luck.

SUBSCRIBE
Just one half decent fish is all it takes, to keep you hooked. Where are the fish?