Fishing Tails > All Articles > Tips > Photography > Fishing Photography: Photographing fishermen creatively
Is that a break in the weather I see? Oh Yes!! Finally a chance to get out fishing on Sunday 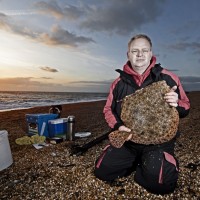 I am delighted that we are going to run a number of features written By Gavin Parsons on photography. Gavin is a professional photographer, and approached me last year to see if we could work together on a couple of projects. Having spent a lot of time with Gavin, we have now become good friends. I asked him if he could help other fishermen like myself take better fishing related pictures. In return I am hopefully going to help him catch plenty of fish to take pictures of. In this first article Gavin is looking at how we can bring some creativity into our pictures. 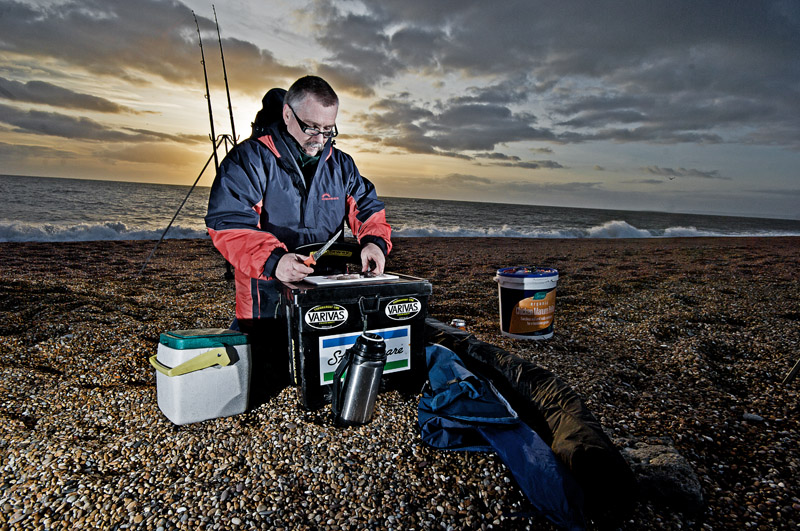 Some people say no and that’s their prerogative. Thankfully most fishermen are more tolerant than many of the pubic and are only too happy to have a photographer take their picture.

I found that out when I started a project on Chesil fishermen a couple of years ago while taking a walk along the beach on fine January day. I was surprised who uses the beach even at the coldest time of year. There were guys from the Midlands, Bristol, east Devon and Southampton. In fact there were only a couple of locals fishing. 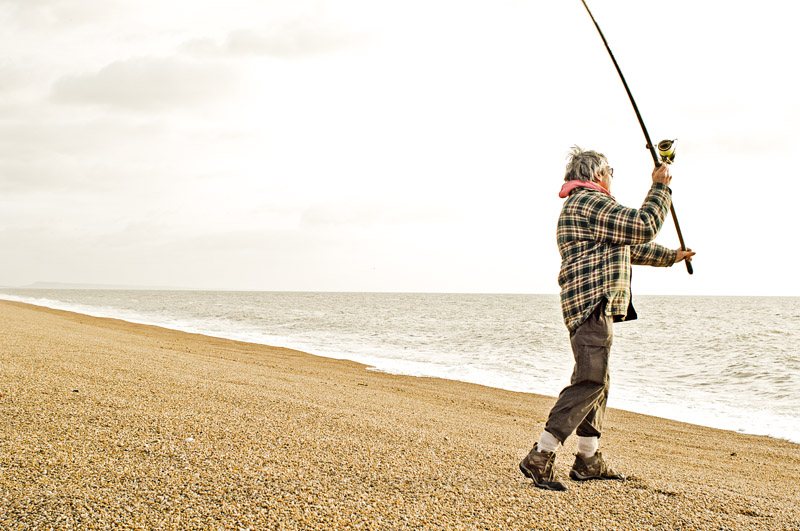 The sun was low in the sky and slapped me in the face spectacularly so I took advantage of the light lancing directly into my lens to create some dramatic lighting effects. 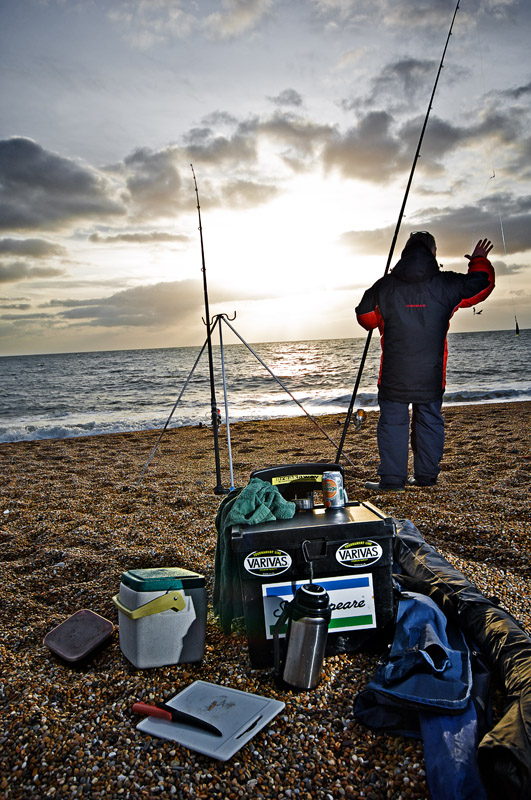 Photography is all about light, but most people tell you to shoot with the sun on your back or at to side. Most photographers wouldn’t dream of shooting into the sun, but it can create some pretty creative effects. The brave snapper who tries this technique will be met with a wall of issues to overcome though. Lens flare, exposure difficulties and focusing problems are barriers to successful shots. But work with them and the results can be incredible. 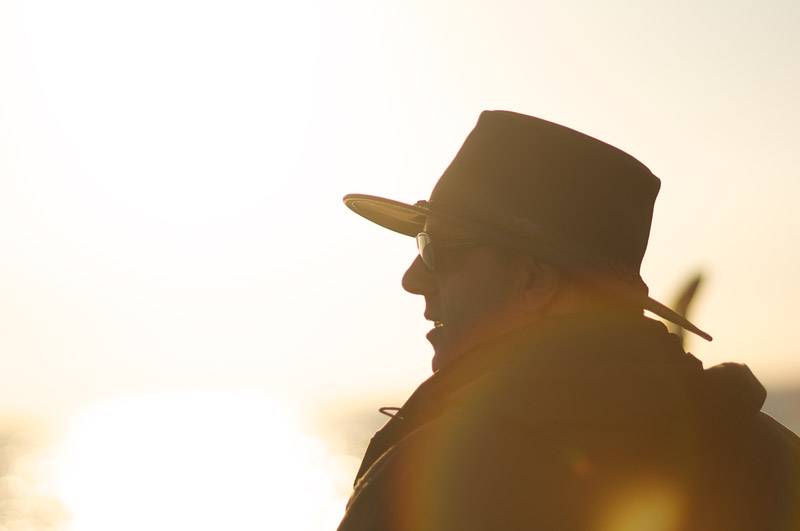 When it comes to lens flare, don’t worry too much. For one you can’t do much about it except buy a better lens and secondly I think it looks great. I like lens flare, it gives a picture reality. Think about how many Hollywood films have lens flare in the most dramatic shots. 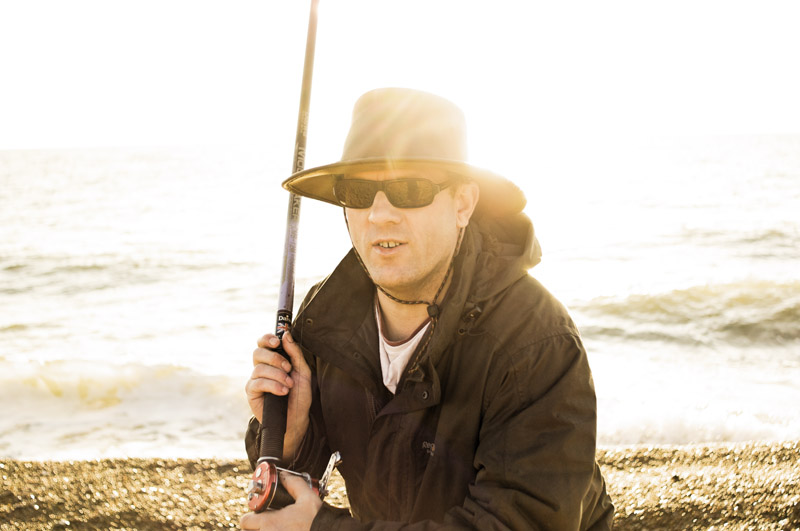 Exposure is a little trickier, but with some playing around with exposure compensation this can be overcome. There are no set rules here because of variables such as the sun’s intensity, its position in the sky and the air quality. In fact anything and everything, can effect the correct exposure. As a general rule though you need to exposure for the face which will be in shadow, so over exposure the reading your camera is saying. Start at +1 exposure compensation and work up to maybe +3. When you get it right you’ll see a very pale washed out image, which is the effect you are going for. 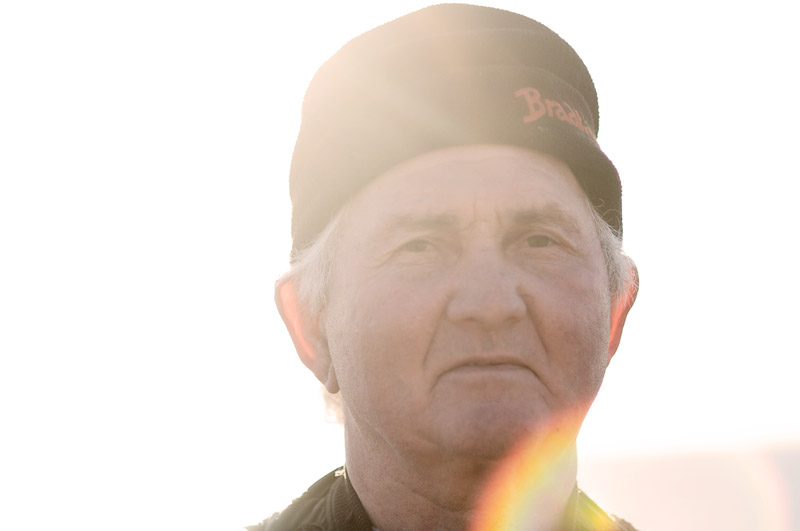 As the sun goes down you’ll have to keep working on the exposure. This is real photography where you need to think on your feet and make the decisions for the camera.

It’s the same with focus. Your camera may struggle and hunt for the right focus point (generally your subject’s eyes) so switch to manual focus. Photographing into the sun can be a tricky way to take pictures if you have never taken control of your camera before, but the results can be equally rewarding if you want something better than just a snap.

My next visit coincided with a fishing competition run by a club from Devon. They too were happy to be photographed and this time I wanted some full length portraits to put the fishermen into the landscape. Being mid winter the sun lasted about as long as a the parking ticket at West Bexington, so I was going to have to finish when the sun set. 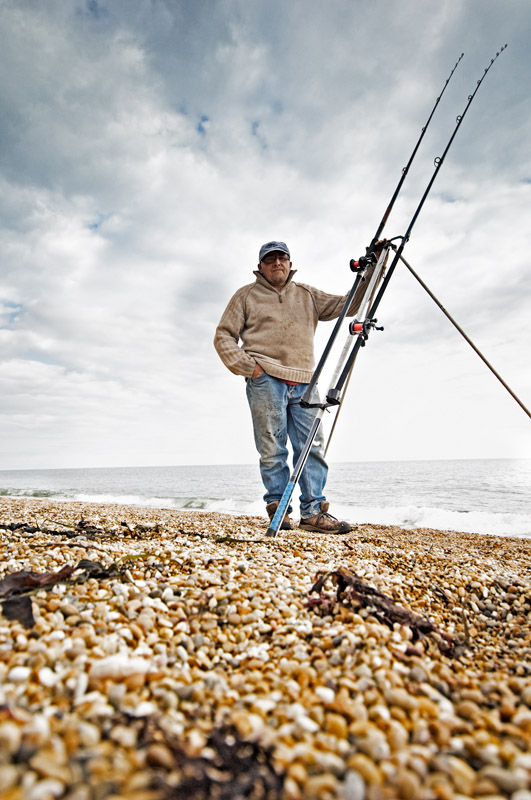 Now, as a commercial photographer I’m not really one for sunsets. There is not much call for sunset photographs because there are so many in the world. This time though I had an excuse so I got on with working out what shots I wanted. As I started the winning fish was landed. A clonking turbot was hauled in so I took the standard cheesey ‘look I’ve got a fish’ picture, but it had the added benefit of a stunning sunset behind. 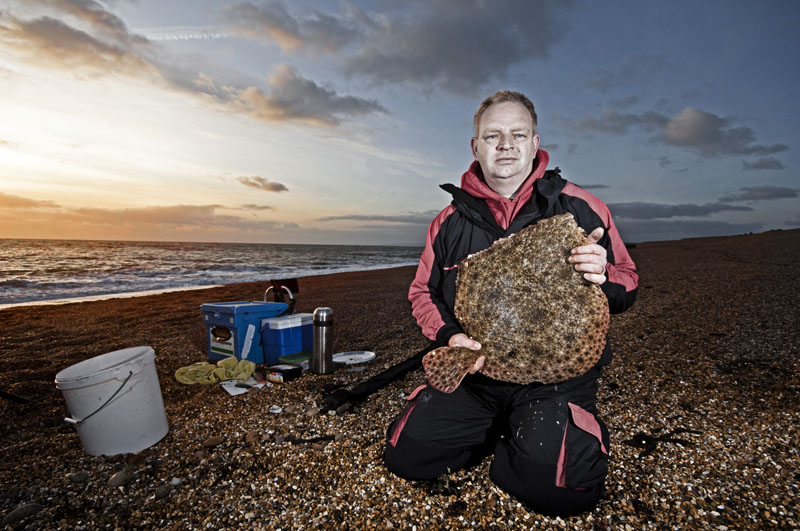 When it comes to fishing pictures, I prefer shots of fishermen actually fishing, rather than grinning holding a fish, so after a couple of shots of the turbot catcher I moved on to get some action (ish) images with an off the camera flash set up I have. I use a radio trigger to fire a tripod mounted flashgun giving me control on where the main light is coming from. I balance the flash with the setting sun so everything is balanced. I find it gives a much more pleasing result, which at the end of the day is what we photographers always strive for.

The Chesil Fishermen project is on going and I will be doing more shots in 2014. So if you are asked to have your picture taken it is probably me. I always ask because that’s the polite thing to do. 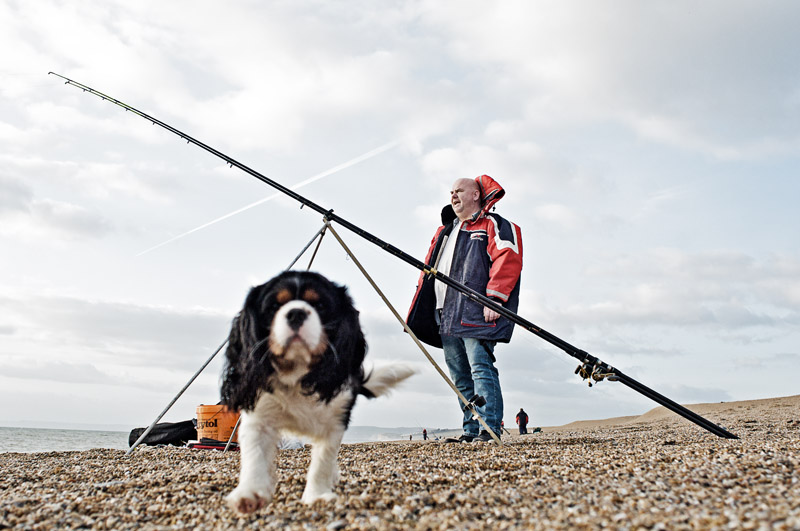 If you would like to improve your photography, use your camera better or have someone in your family who wants to improve their technique, then I run photographic tuition throughout the year. See my website at www.gavinparsons.co.uk for details

SUBSCRIBE
Is that a break in the weather I see? Oh Yes!! Finally a chance to get out fishing on Sunday