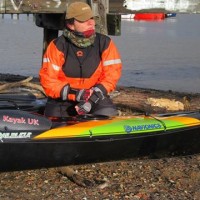 First thoughts of a fishing Kayak start to finish

After an embarrassing episode whilst out fishing in my Kaskazi Marlin ..where it pains me to recount the tale but I had to give a stonking 10lb cod to Peter and ask him to bring in for me, as it wouldn’t fit into the Marlin, 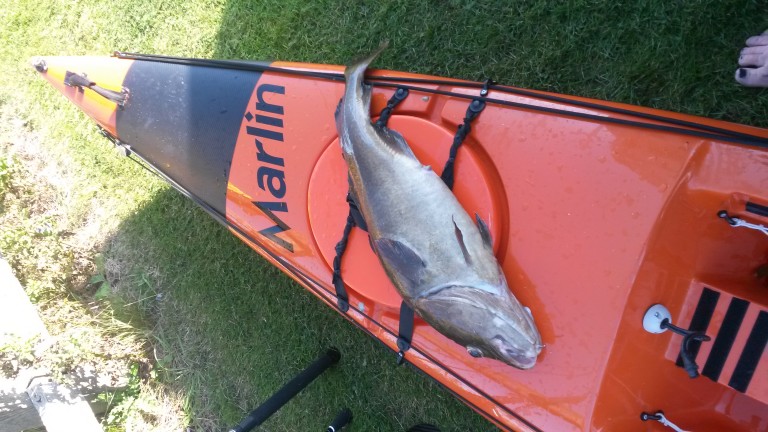 The end of my Marlin

The decision was made… my beloved kayak had to go, so up for sale she went, the proceeds going towards a brand new Kaskazi Dorado 2. I knew this was the way forward as Peter has had Dorados for a year or so firstly a second hand D1, then as a  present for getting the all clear from his cancer last year  I surprised him with a all black D2, the only one ever made, so product picked, now just the small matter of which colour. 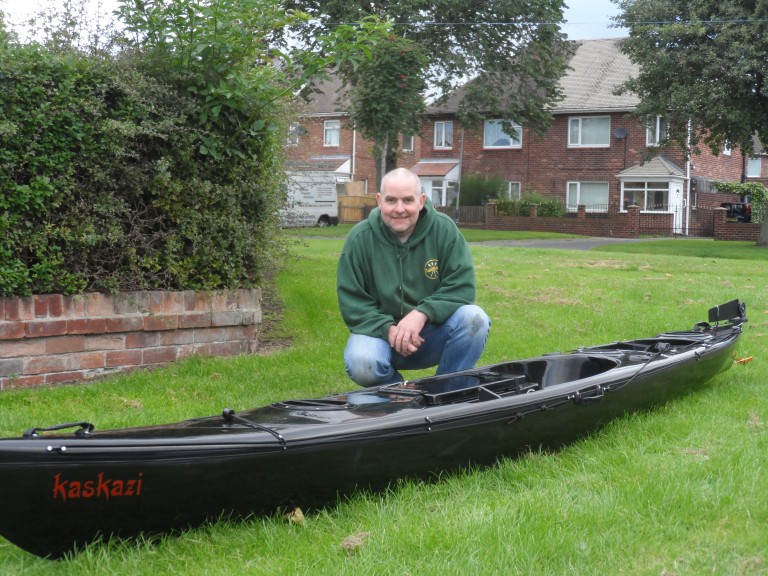 Not wanting a basic colour set up or run of the mill looking kayak we spent days trolling through google images looking for ideas, knowing we would be limited with what Arthur Fincham in South Africa could achieve with fiber glass and the moulds they use, then taking inspiration from one of my favorite films we seen this photo. 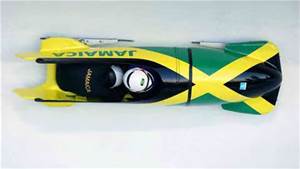 For those that haven’t seen the film ‘ Cool Running’s ‘ its a story of based on the Jamaican Bobsleigh team, though the film is largely fiction compared to the real life events its still a lovely feel good film, which depicts the underdog not giving up, through their tenacity and persistence they excelled and gained acceptance as equals. So now we had a design how could we turn this into working on a kayak. Enter 16 year old daughter Becky and her ICT skills, after giving her a brief this is what we sent off to Arthur in South Africa, then a few emails later we settle on the final picture that Arthur agreed could be achieved,

I was over the moon that it was possible,..So this was it the final draft, all agreed, Now the long wait……x

We had asked Arthur to keep a photographic log on the progress and stages of the build as this is the part nobody actually see’s and I think its important not only is she mine but a whole new process to the fiber glassing was to be used, the guys at Kaskazi Kayaks went off for some extra training and not any old training but attended a racing yacht manufacturer to learn how achieve a light weight but strong craft, the results I can confirm are outstanding she weighs in at 26.5 Kg as apposed to 30 Kg of Peters also not much more than the Marlin, this means I can lift her on and off the Discovery myself..to be able to see the process and craftsmanship as this kayak is rather special, 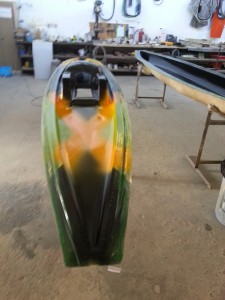 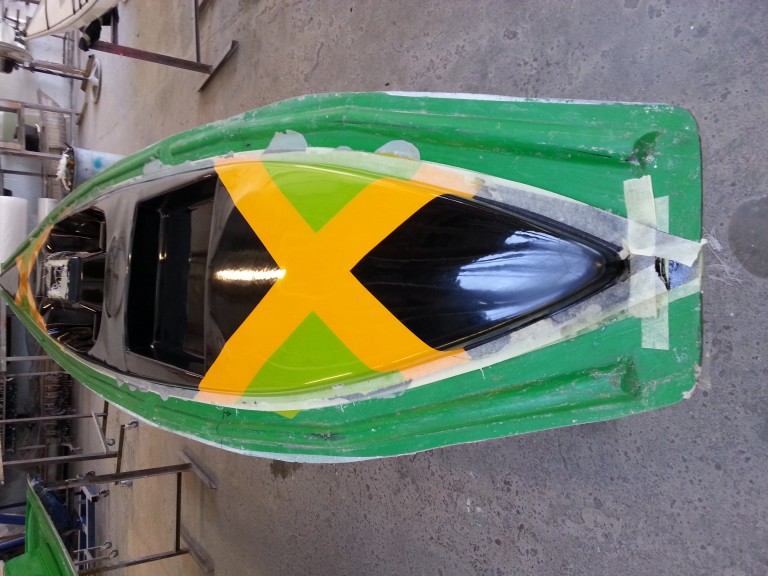 Out of the Mould 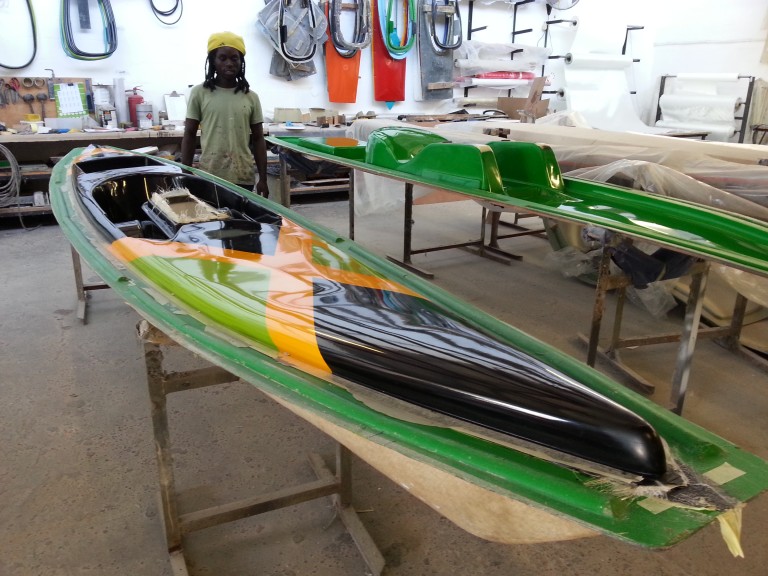 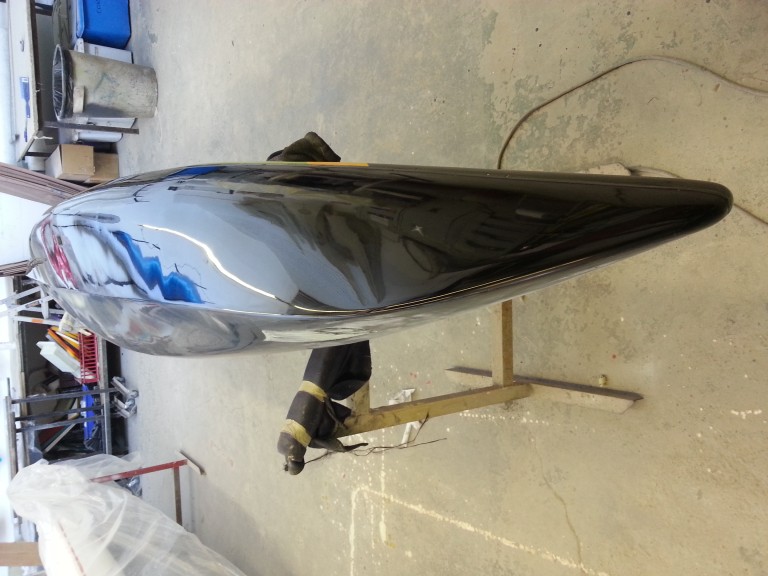 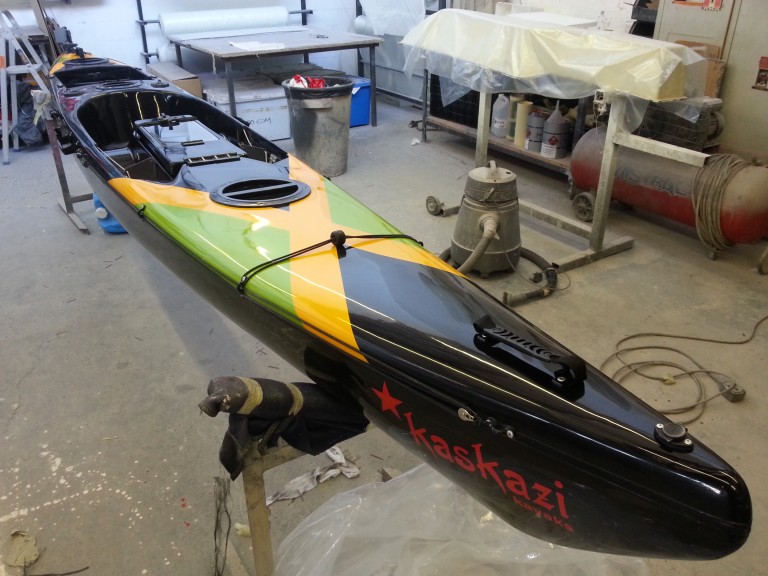 The problem with ordering a kayak in the winter is there aren’t as many container ships head up this way so there was a slightly longer wait than you would normally have when ordering a Kaskazi, but then she managed to jump a ride in a container with a RIB heading to the UK. Unfortunately we were unable to track her once she left South Africa, but it wasn’t long before Simon was en route to pick her up and heading North on the A1, 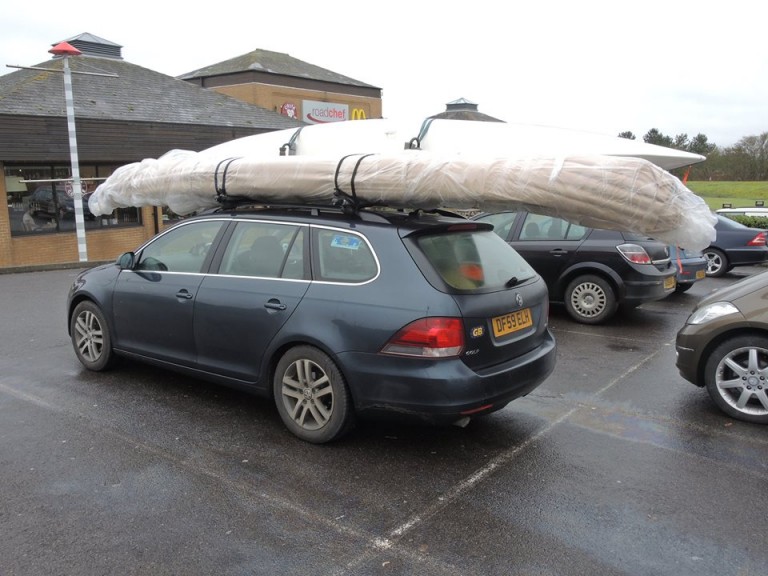 Its on Her way

even Storm Henry that was felling trees in his path couldn’t stop him. Once he had arrived at ours safely I did allow a 5 minute break for Simon to have a quick coffee and due to the winds and driving rain we carried her into the house for the unveiling. 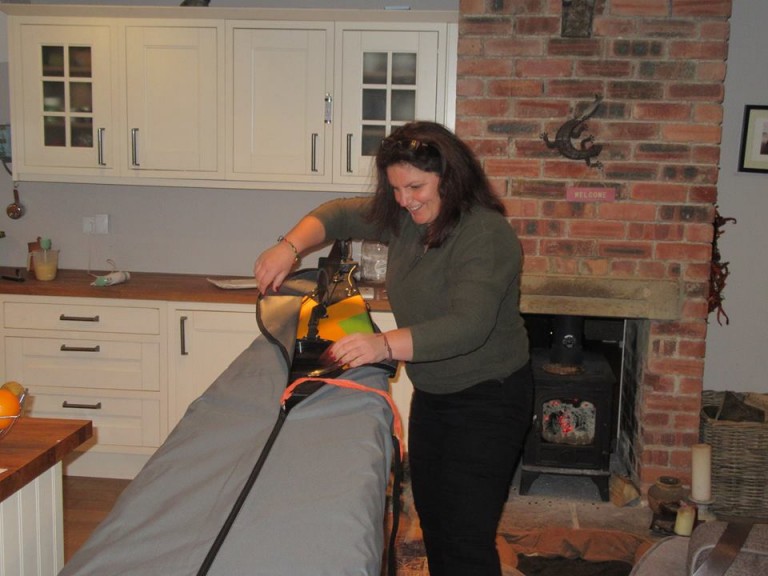 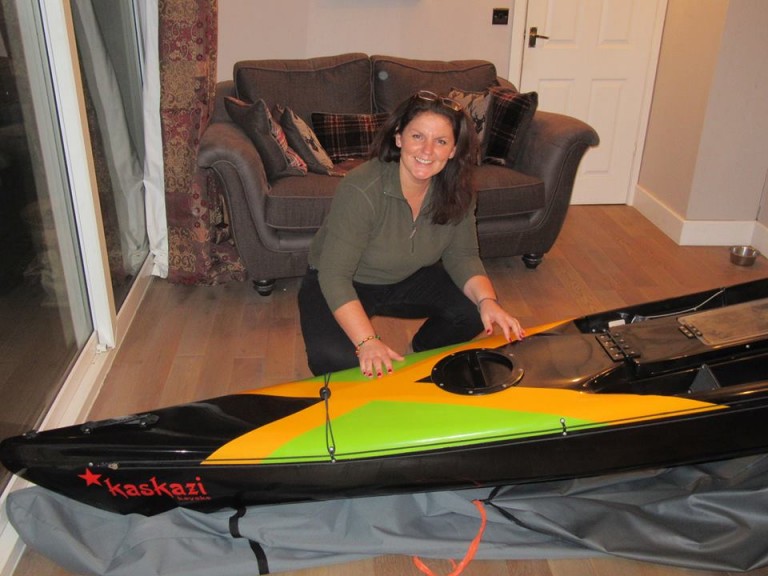 These day’s I think we all become accustomed  to the sole-less and faceless act of  ordering products on-line , so it is like a breath of fresh air and a nod back to the old days of bloody good customer service you receive when you purchase a Kaskazi Kayak, not only did Simon deliver the kayak to my door, but had marked the event of going to the effort of having Paul Fennel to make a Smiler lure to match the kayak, 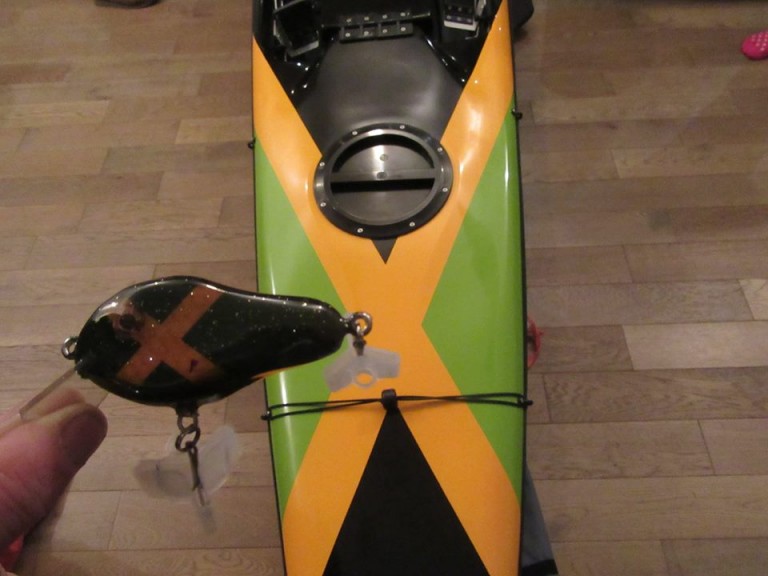 sadly we don’t get the personal touch like this anymore, it made the whole experience so much more special, thank you so very much gentlemen.

Poor weather in the Northeast had clipped our wings as far a quick paddle to the fishing marks, so a short test paddle off Newbiggin was all we could manage. once out in the sun she looked amazing and was turning some heads already. 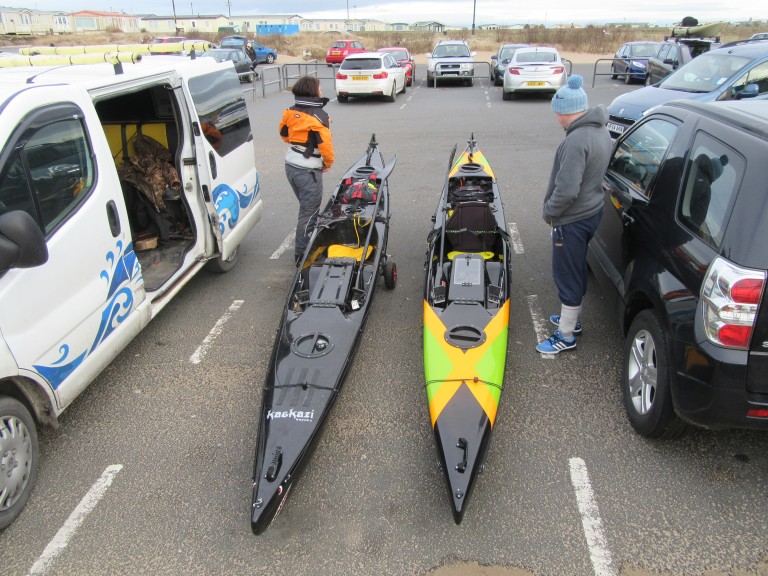 We launched into a quiet harbor then paddled out to a bit of a breeze and chop, for those who own a Kaskazi will know that it doesn’t take long to relies that your paddling something very special, they just feel so very secure and responsive, so yes that was me a very happy bunny. 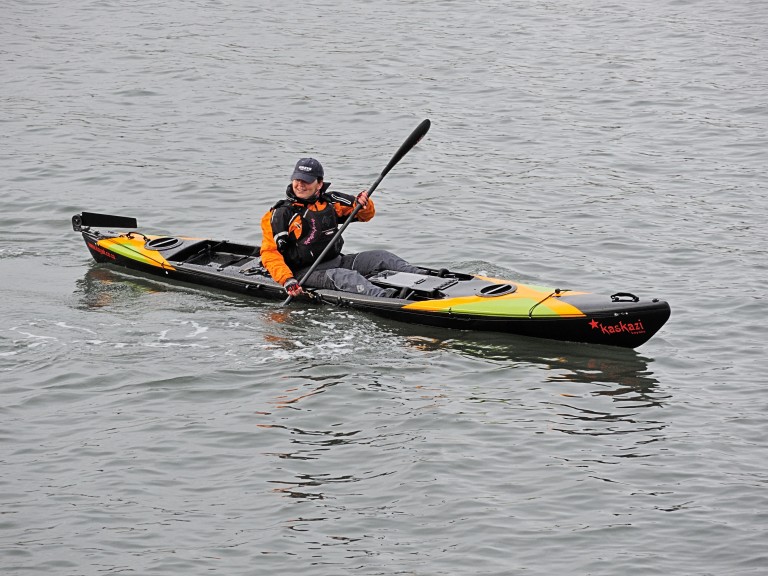 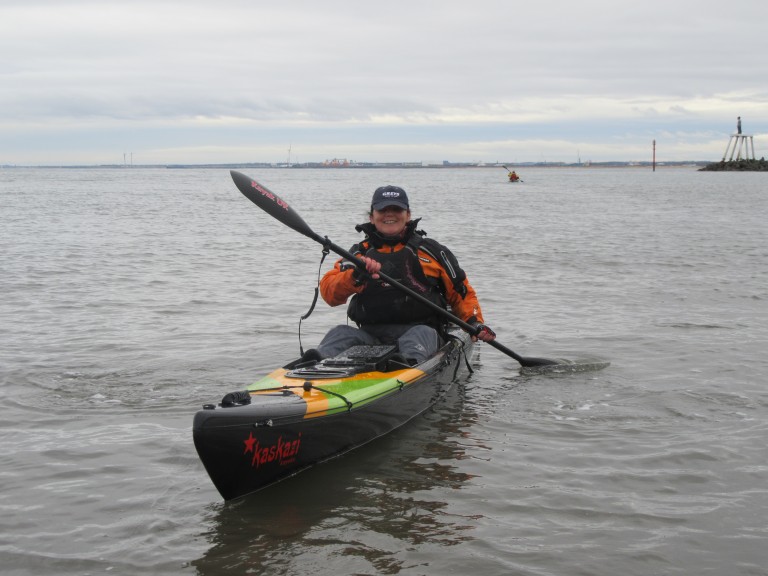 We then sat and started to think about the rigging, those that know me know I travel light when I fish, though I do like the nicer things in life as far as my gear goes, I’m not your classic tackle tart like some I know, so I want to achieve a un-cluttered deck and minimal accessories on show. So with the assistance of Railblaza attachments we started the rigging of Cool Running’s.