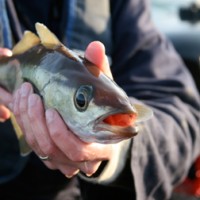 Returning from a Turbot session on the Shambles

Well what a great weekend we have just had.

As predicted the Plaice were not going to really oblige due to the big tides. The ones that were caught mainly came at range and on the slack periods. Several anglers managed half a dozen in a session, but most blanked. There was some nice ones amongst those that were caught.

Bass have started to show along Chesil Beach, with a nice 6lb fish being caught at Dragons Teeth at Abbotsbury. The Mackerel are starting to show for those prepared to put the effort in. They have been caught at numerous marks all along the beach.

Reports of at least half a dozen Smoothound have been caught on the Weymouth end of Chesil.

Lure fishermen have been busy targeting Wrasse over the weekend, with some nice catches behind the kelp beds around Portland Bill. 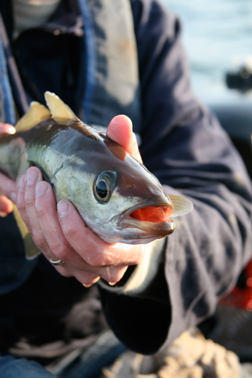 One of several nice Pollock from Portland Harbour

Private and charter boats had a great weekend with a lot of Turbot coming off the Shambles. A few Plaice are showing on the bank as well. I managed to get out with my friend in his boat. We fished the Hood entrance in Portland harbour and managed a dozen nice sized Pollock.  The biggest went a bit over 2lb but they all fought like mad. Great sport!

If you have any catch reports then feel free to email me with them sean@fishingtails.co.uk