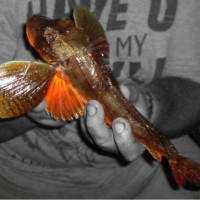 Late summer fishing in the Solent.

My last report saw my husband Rich catch up to just one fish behind in our annual fishing competition. On Saturday evening we returned to Stokes Bay in Gosport, Hampshire, to fish the rising tide. High tide was about 1.30am and the first baits were in the water by 9pm. It was a calm evening with very little wind and ever so warm, about 16C, we were in t-shirts for most of the evening and the steady stream of bites kept us busy and warm.

With a boat trip the following day meaning an early start, we planned to fish until just before high tide or until the bites died off, whichever came first. Baits were ragworm, with small pieces of mackerel and squid for tipping off. Rigs were simple 3-hook flappers, with size 2 hooks. Rich’s first cast resulted in a lovely dogfish. I know some people dislike them or think them a nuisance, but we think they are great, putting up a nice little fight and zipping about in the water on the way in to shore.  And Rich had a lot to thank this doggie for, as it meant he had now levelled the fishing score!  I think his smile says it all: 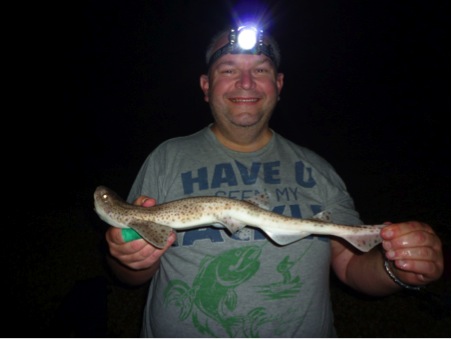 His elation was short lived however, as I reeled in a small whiting, taking the lead once again. Our annual competition is just for a bit of fun, getting us thinking of new ways to present baits, making rigs and learning new skills, however it does bring out our competitive sides. I look round after returning my whiting to find Rich resorting to ‘dirty tricks’ to try to retake the lead by sending out a 6-hook flapper that he had secretly constructed himself. “All’s fair in love and fishing“, he tells me!

Well for the moment, the tactic pays dividends as he reels in his second tub gurnard in as many sessions: 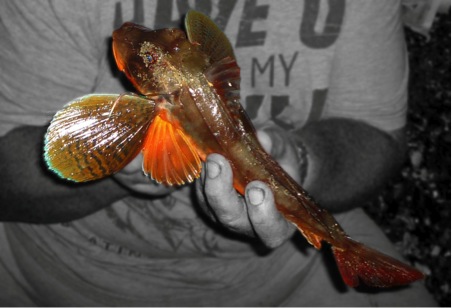 We carried on fishing with Rich excited that he was in the lead for the first time this year. Every time I landed another fish, he fought back by landing another one. We both had small whiting as well as ‘baby sharks’. By midnight we were getting tired and, with the scores all level, we decided to call it a night. Then, as Rich reeled in his last cast, he was rewarded with a duo of pouting and he retook the lead. It had been an exciting session, again with a mixed bag of species. You can usually rely on Stokes Bay to throw up all sorts. We ended the session with Rich the leader on 116 fish, and me on 114.

Our next fishing adventure was due to be the very next day, have a look at my boat trip report for details of how the day panned out.

SUBSCRIBE
September fish of the Month Cod on Chesil special