Fishing Tails > All Articles > Reports > Chesil Beach > Another quiet weekend
Could the fishing start to pick up this weekend? How important is the choice of colour when Lure fishing? 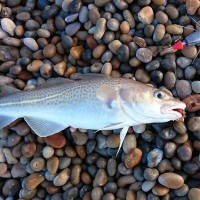 Well thats another weekend passed without much being caught. The PLaice were even scarcer that I thought they might be. But they are starting to show to the East, so they will be with us in a couple of weeks. I still think that the next set of spring tides will be when we start to see them.

Wrasse fishing we pretty good with a few lure fanatics targeting some nice Ballan Wrasse from the east side of Portland Bill. The biggest weighed in at just under 4lb. I hope to have a try for them later in the week, if I have the time, as I am hoping to get out for some Trout fishing. I will leave you with a picture of one I had last year. 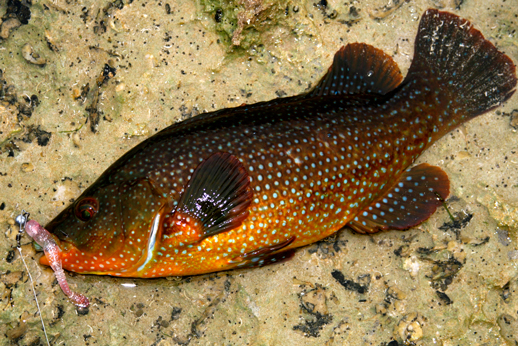 One of my friends spent all day fishing West Bexington on Saturday in the hope of  a Plaice of two. All he managed were a couple of small Whiting. He decided to give Ferrybridge a go on Sunday and ended up with some Dogfish, Pollock and Codling.

I have noticed a small but steady increase in the water temperature over the past week. It has risen to 8°c. now. Once it hits 9°c. thats when things will start to liven up. With each day getting longer, and a few sunny days forecast, it wont be long.

For those interested in lure fishing, I have an interesting article about lure colours that I will put up tomorrow.

Chesil Beach forecast: We are still on some big tides for the next couple of days, so the chance of getting an early Plaice is still there. As it was proved are some Codling. There seems to be plenty of Dogfish on the beach, especially at night. If you do head to West Bexington or one of the other Western Beaches don’t forget to try in close with small lugworm baits for Dabs.

Portland Harbour: I had a look to see if I could spot the first of the Mullet returning this weekend. Unfortunately they have not come back yet.

SUBSCRIBE
Could the fishing start to pick up this weekend? How important is the choice of colour when Lure fishing?

6 Responses to "Another quiet weekend"