Fishing Tails > All Articles > Reports > Chesil Beach > A quiet week on the beach. Not for the Fishing Tails team!
Fishing on the Isle of Wight Technology overload 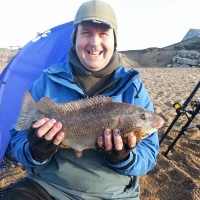 A quiet week on the beach. Not for the Fishing Tails team!

I was amazed by the lack of anglers on Chesil this weekend. Every time I drove past the beach was almost empty. I don’t know if you were all doing your Christmas shopping, or had just heard that the fishing was poor. I talked with the guys in the tackle shop and they told me that the fishing was not very good at the moment. I am not sure what they mean by not very good, as the Whiting and Plaice fishing has been hectic at times. I had several good sessions last week, both on bait and lures. If they mean that it’s poor because there are very few Cod showing, then they would be right, but winter fishing is not just about boring old Cod.

Chris Powell came down from South Wales with a couple of mates to fish overnight on Saturday, and they ended up with a real mixed bag, including an 11lb Conger, 4lb Wrasse, loads of Pout and Whiting and an unusual Coalfish.

Yes it has been five days, since I last posted, and no that is not going to be the pattern for the future. Far from it in fact! All of us have been extremely busy, working to make the site better and produce more articles for the coming weeks. I have been filming, guiding, fishing and concentrating on learning how to use all the hardware and software that I have invested in over the past few weeks. Adrian has been busy working in the background as usual. He is working on a more mobile device friendly look to the site, as well as trying to figure out how to best implement the multiple requests for improvements and additional features that I keep demanding from him. Though he did manage to escape from London and join me for a great lure fishing session mid week.

Our Solent contributor Loraine, was busy preparing for her first ever match yesterday, and I know she will be sharing that experience with us later in the week. Leo has been working nights, so has not been able to get out to much around the Poole area. He did get a chance to over the weekend, so we have some reports as to what is happening in that area.

Over the next week, I am gong to ask the team to give me their Christmas stocking filler wish list, to see if what they want for Christmas is the same as you. I am going to start of with Leo. I had to make him alter his, as his first choice was a 32ft South Coast Catamaran! So for more details of Leos wish list

First live broadcast: Tomorrow (Tuesday 10th December) we will be broadcasting our first live Google Hangout on air. I will be joined by Adrian the man behind the scenes of Fishing Tails. We are going to be discussing the new features that we will be introducing to the website, including how you can become involved and get yourself some free tackle. We will also be chatting about the differences between the Xorus Patchino and the Savage Gear Panic Prey. You will be able to ask us questions live, and I am sure one of us will be able to answer them. It is going to be at 1pm. I know that a lot of you will be at work then, but I really want to kick start this. Even if you miss it live you can view it later either through Youtube or Fishing Tails Google+ page. The link is the red G+ button at the top right hand side. Have a look at the link for details on how you can watch the broadcast and you can have a quick look at the invitation video I made earlier Fishing Tails live broadcast

SUBSCRIBE
Fishing on the Isle of Wight Technology overload