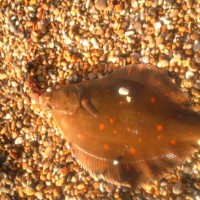 Like a lot of anglers fishing Chesil over the past week, I decided to try for an early Plaice. I headed for Cogden to find that the only other angler fishing the beach was Charlie Lane from Willand. Unbeleivably Charlie was on the mark that I normally fish, so we decided to set up a little way downtime from him.

The session started off pretty well, with a couple of Dogfish and Whiting coming out within 10 minutes. I could see that Charlie was also catching a few fish. This run continued for just over an hour, but unfortunately the wind changed direction and the bites became less frequent.

Charlie came over for a quick chat and told us that he had managed a couple of Plaice just before we arrived. 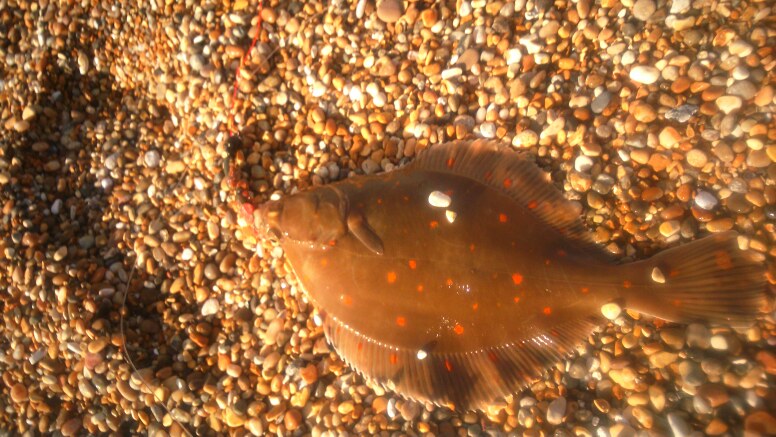 like us he had noticed that the bites had slowed down since the wind had changed direction and was now in our face rather than coming from behind us. The result was that our casting distance had been reduced by quite a bit and we were not able to get out to where those Plaice were feeding at distance. I think it might be time to get in contact with Colin Olver for a casting lesson to help me get a bit more distance.

I did manage to get out a couple of days ago for what is probably my last chance for a Pike on the river before it closes for the season. I was determined to try and get a Pike on a fly again. I was very disappointed when I turned up to the river to find the water still very coloured, but I did eventually manage to get this one Pike out. 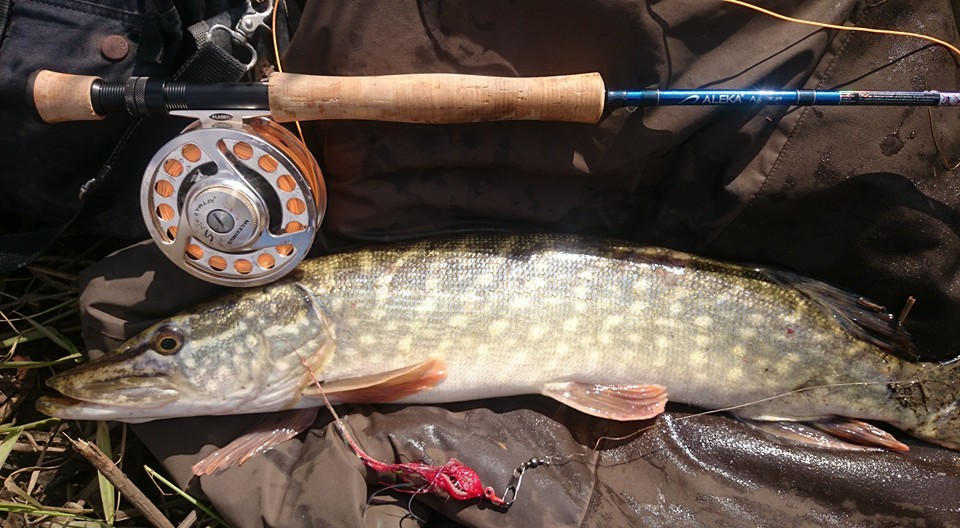 I hope you all enjoyed the different articles we have had this week. I know I was unable to find the time to write the weekend report on Monday, but I was busy fishing 🙂 We have lots more for you next week.

Unfortuntly we only had one entry for February’s fish recipe competition, but I think you will agree with me that Gary Mueller’s Crunchy vegetable and Bass spring roll is worth a prize anyway. Well done Gary, you win a half days guided fishing with me. Let’s get this months recipe competition up and running. If you want a chance to win a half days guiding with me, then send me in your fish or shellfish recipe to sean@fishingtails.co.uk with a couple of pictures. The winners each month will all have a chance to win the final prize at the end of the year, of a days River Cottage Shoreline course.

Chesil Beach forecast: There is no doubt that the Plaice have started to show and I am guessing that they are going to be the main target for most anglers fishing Chesil. The water is still pretty coloured due to the winds mid week, but it is clearing nicely and should be a lot better by Sunday. However I do think that the addition of beads on your rigs may help to attract the Plaice. The downside is that even a few beads will cut your casting distance down considerably. The best baits are normally Ragworm tipped with a sliver of Squid or Black Lug.

There are still the odd decent Cod to be had, especially at night. Dogfish and Pout will also feature in night catches.

Portland: there are a couple of opportunities to have a go for Pollock this weekend, whether high tide is within 2 hours of dawn and dusk. This is prime time for marks such as the Bill and Church Ope cove. The main potential spoiler could be lack of water clarity. This could also have an effect on the chance of an early Wrasse.