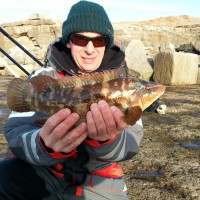 Having been on Chesil Beach and talked to quite a few people all along it the general opinion is that it is not fishing very well at all. A few Whiting are still being caught, but very few Cod, especially during the day. Evening sessions are producing plenty of Pout and Dogfish.

Yesterday I invited Mike Davis from Harnham Press in Salisbury to join me on a Wrasse and lure fishing session on Portland. Mike had kindly helped get my dilapidated MacBook back to life and allow me to continue doing my reports, so I thought it only right that I try and help him catch some fish. We certainly did that with some nice Wrasse, with the biggest going around 3 1/2lb. It certainly was pretty action packed and far better than boring ourselves to death on the beach. 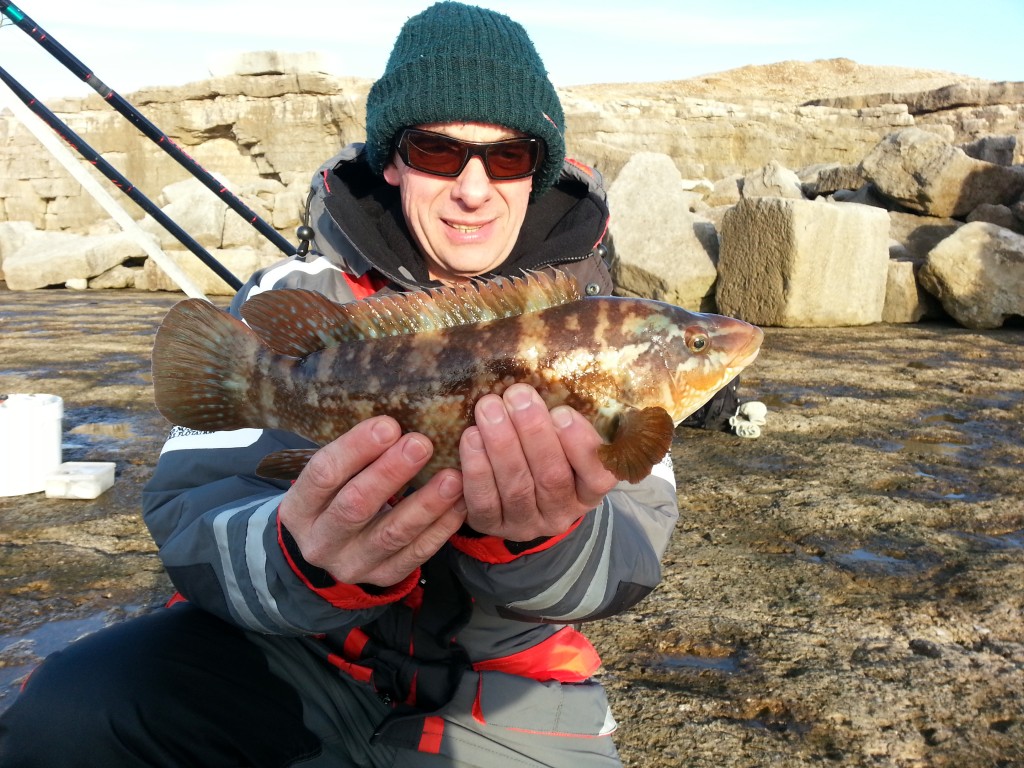 Mike with a lovely winter Wrasse

Chesil Beach: Starting to pick up again with waves averaging 1.5m. The water is pretty clear at the moment.

Portland: A bit of a swell starting to build making it a little bit uncomfortable on the lower ledges. Water is clear

Chesil Beach forecast: The spring tides are starting to build this may well set the fish feeding again. It might also tempt a Cod or two to put in an appearance. With the water being quite clear at the moment evening sessions are going to be more productive. Expect plenty of Dogfish, Pout and Whiting. Three hook flappers for the Whiting baited with Ragworm and tipped with Squid. FOr the Cod the best baits as usual are live Peeler and Hermit.

Portland: Some good Wrasse fishing to be had with both lures and bait. Hard back Velvet Swimmer Crab or Hermit Crab are great baits for the big Wrasse. The lure fishing for the Pollock yesterday was very poor. I expected quite a few fish at dusk as it coincided with high tide, but they didn’t want to play. Still worth another go this evening.

Portland Harbour: There are a few small school Bass hanging around Ferrybridge, but not a lot else with the exception of a couple of Flounders. As the tides build up during the week, I hope to see the fishing in the harbour improve.

Weymouth Bay: Rapidly dropping water temperatures are likely to bring in more Whiting and Flounder into Weymouth Bay. Preston and both piers will fish well for them. Squid are being caught on the Pleasure Pier at night.

Guiding: Due to the Bass fishing falling off I am only taking bookings for traditional bait fishing sessions for December. I will be targeting Cod, and Whiting from the beach and large Wrasse and Pollock from the shore. I am happy to fit in a few short Pollock and Wrasse lure sessions from the rocks, but these will be limited to 1/2 day or 2 to 3 hour sessions. These can be tailored to your requirements. Drop me an email for more details sean@fishingtails.co.uk