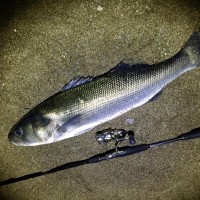 You never know when that big Bass will turn up

In my first article for Fishing Tails I want to tell you a bit about me and recall the tale of my personal best Bass, a fish that I caught recently. If you don’t know me my name is Paul Gordon and I fish around Plymouth. I am a Bass fanatic. Over the past couple of years I have built up a bit of a following through Facebook and my page Bassmans Bounty. Through this I have tried to share my  passion by filming and writing about my adventures and making people feel excited about fishing, with my own character and style on camera, which I hope leaves you longing for the next adventure. I hope you will enjoy reading about fishing in the Plymouth area in the future and I will leave you with this tale about a great session I had recently.

So, I headed down to one of my local marks armed with only a few left over lugworms and some fresh baby Cuttlefish purchased from Rex down wholesale fish merchants in Plymouth. The wind was strong westerly but also dry and mild. I arrived just as darkness fell and the neap tide was due in shortly after. I was really fishing the last of the run off and decided to sneak out a tiny worm bait on a 6-0 Kamasan uptide hook intended for a baby cuttle bait on the next cast! Seaview Angling Plymouth supplied the complete set up of a Rovex Plugger 20-50g rod teamed with a Shimano Exage 3,000SFD. The mainline was Yo-Zuri Hybrid 81b and the hook length was amnesia 15lb. The rig was a basic 3 way swivel paternoster with a metre long drop to the wait link, the sneaky 30cm hook length had 7 Tronix Pro floating beads jammed up at the business end by rig stops. I had been experimenting with 3 beads and had had some success, but found that the more worm used made the anti crab rig neutrally buoyant and those EXASPERATING PESKY BLEEPING CRABS could again strip my bait in less than 5 minutes! Using 7 beads I found, that in the shallows, it pops right up nicely… 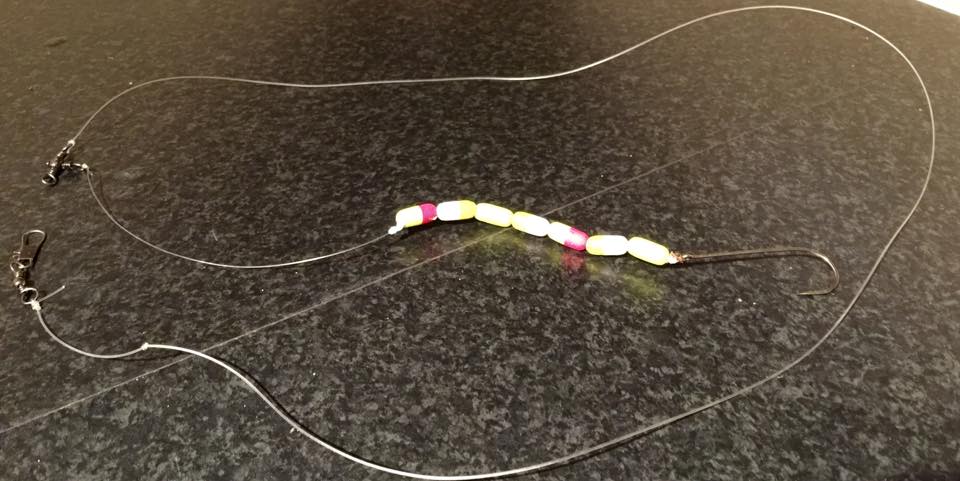 THE SCRAP… So, i’ve just cast out the second rod with baby cuttlefish bait on a pulley rig. I settled into a an expected 20 minute wait for the first flush of tide when… boom! The lure rod bends double and I’m into the biggest Bass of my angling life! The only thing I could do now was ride out the initial run then re-evaluate, however, due to the shallow river (maybe a foot and a half), the fish just kept running and running. Ever slowly making her way down towards the impending surf line hundreds of yards away! I instinctively realised it was time to start walking…and fast! The already depleted spool was dwindling fast – this was no 4-6lb upper schoolie, far from it.

As I was being dragged out to sea, I initially began to wonder if it’s a big Sea trout or Salmon coming out from the surf into the run off? The water was coloured which meant I couldn’t really see the fish; but I could hear it now and again. After a good 300yd walk, I managed to turn the fish a good 3 times with the reel screaming continuously. But each time she turned and ran. Things were getting more and more desperate with the impending surf line now only 50-100yds away, the old girl was making a bid for freedom and I was honestly never in control at any point considering the power of this thing I was attached to. It was time to make myself known to this leviathan and nervously on went the spotlight. I tightened up on her a bit and made my intentions clear! The response was a violent head shake followed by slack line – which should of ended the story but somehow when I picked up the line she was still on! Now the fight was more laboured and I pressured her to the surface. Way out in the pool was this amazing near metre long of silver, contrasting with the brown run off fresh water with my head light right on her! At this moment I ran ahead of her on the sand almost at the surf line whilst keeping some sort of tension on the fish. The change of angle and the fact that now I was downstream of her was the game changer. She was so spent by this time that I stopped winding against the drag and went for the risky finger on the spool job. Then I walked back cautiously away from the river with the Rovex fully bent in. A few hairy moments before I had felt the bump of her hitting the shore; I was 30-40yds away and could see a huge head in the distance. 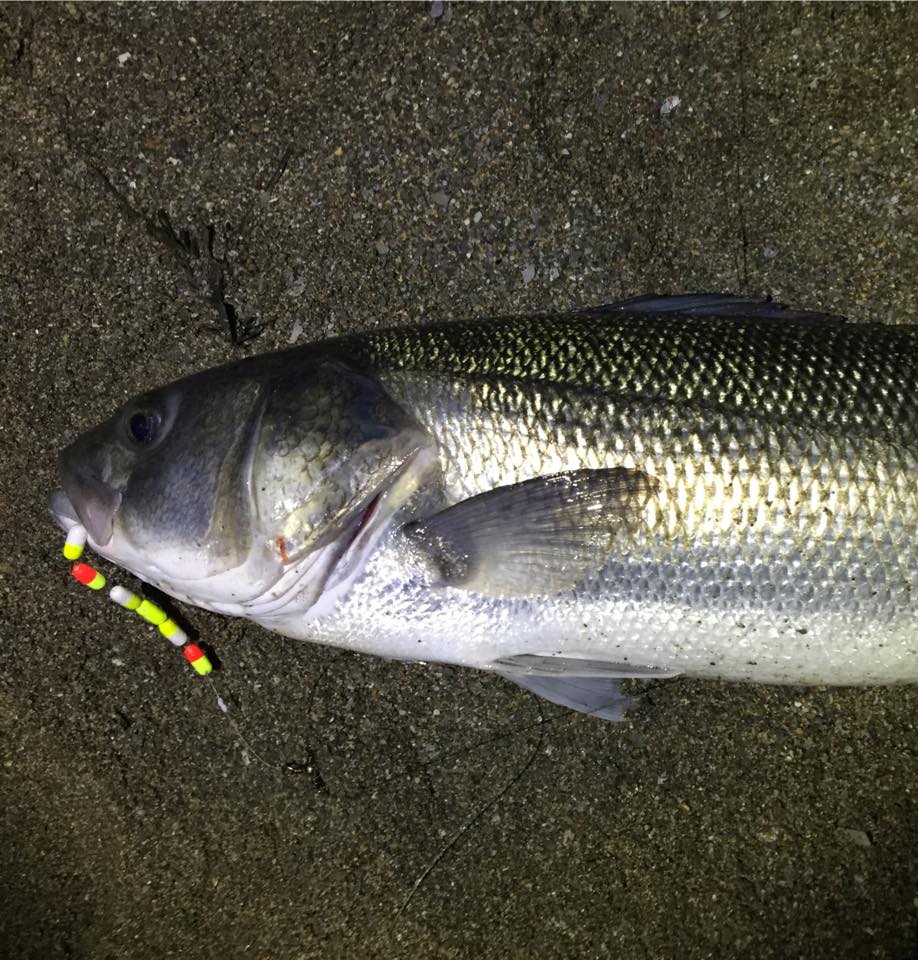 At this point I began to run while not picking up the line and arrived to see this magnificent fish lying there barely out of the water. The size of this thing just sent me into deeper shock! It’s fair to say I get excited when I catch a modest fish but the length and depth of this beast was immense – I mean really big against the sand in my headlight. This was a double and looked bigger than my inshore boat PB of 10.8 all day long! 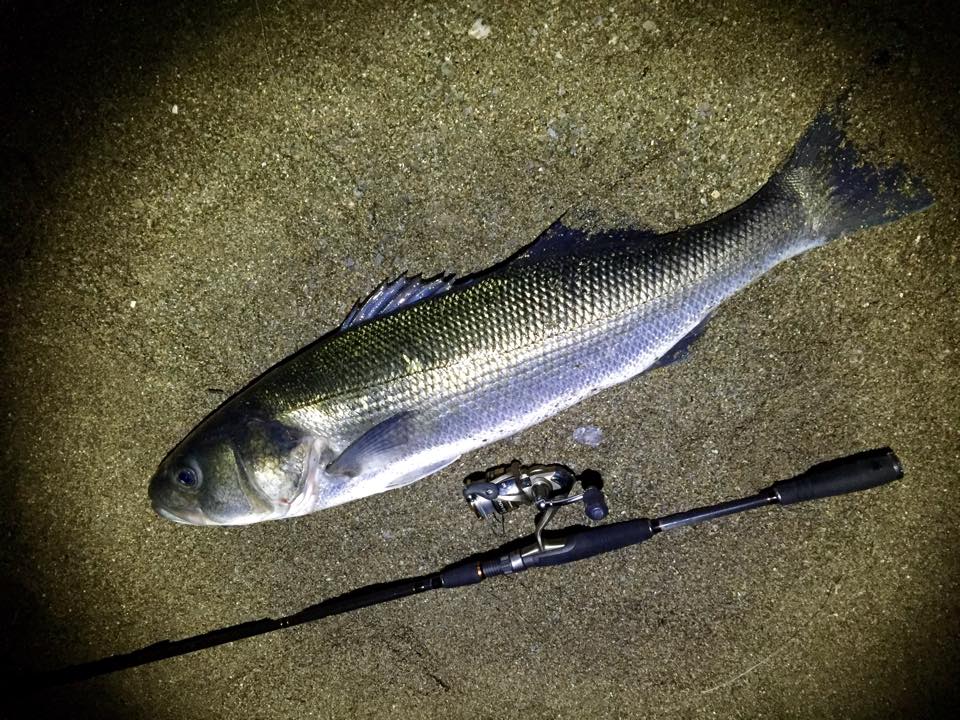 My thoughts now turn to the fish. Why is she not trying to get away? This is a complete first for me, all sizes of Bass are very capable of turning on there heels and saying see ya later! The fish was completely knackered from the fight and had swallowed the hook. She was bleeding badly. I picked up the line, slipped my hand into her gills and carried her running back to the unattended rod rest hundreds of yards back. From there, I took a quick phone vid whilst heavy breathing from the fight/run/shock. Next, and against reason, I put my hand in her huge mouth to remove the hook which also took patients and was painful for us both as the 6-0 was deep. Hook removed, she was back in the drink and being towed around in the shallows with my hand in her mouth, still bleeding she kicked a few times then went belly up on me. Another first when it comes to the spiky ones, I spent a harrowing ten minutes with this magnificent creature before realising her mouth was open all the time and it was all over. My ambition this Autumn was to catch a big one on camera, weigh it on camera, and then let it go on camera. I wanted to promote catch n release in our sport, as I have a responsibility…like all of us really. I was gutted it turned out this way but what a feeling to catch a Bass of that size! A fish of a lifetime on a tiny lure rod with a tiny reel and a tiny bait in a foot and a half of water. 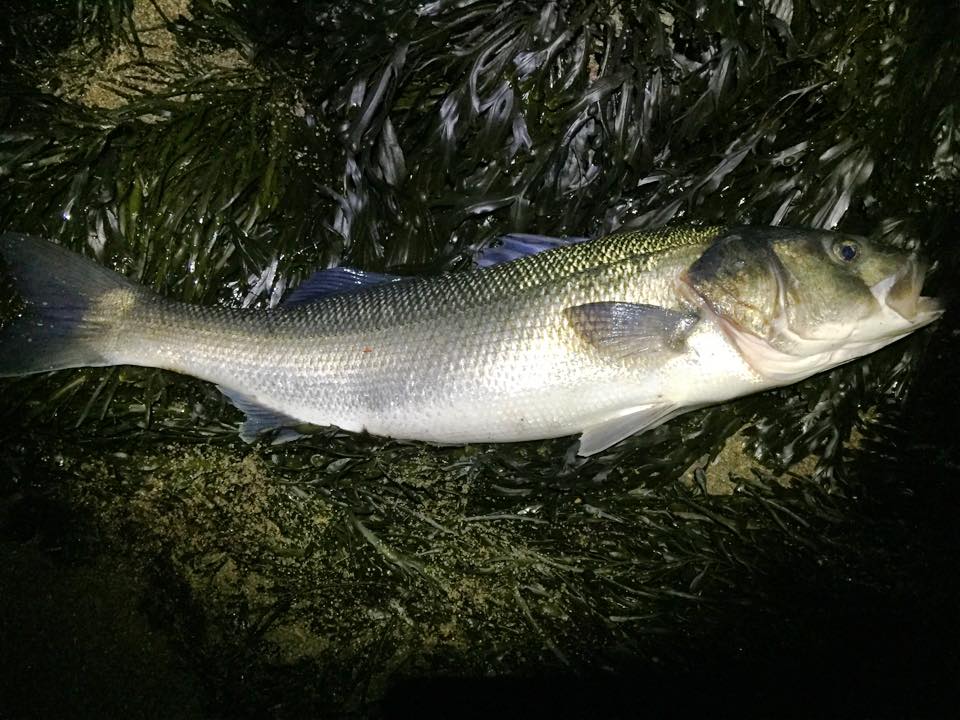 Here’s the spooky bit. That was probably my 12th trip targeting big Bass with big baits, inspired by others who have caught such giants recently. Blank after blank, constantly filming and hoping! As if to tempt fate, I left my trusty Go Pro at home on this day in history and look what happened! I feel very humbled and lucky to have had this surreal experience, I’ve fished this spot for over 30 years now. I’ll never forget this one… I went through every emotion after landing this magnificent creature, I will also admit to crying my eyes out after telling the misses on the way home that I had done it at last! My scales let me down on the beach so I arranged to meet my fishing buddy Ben Luscombe so we could weigh the beast, I remember opening the car boot and bens reaction, which was at first stunned silence, we took some pictures and made a video report of the capture. Amazing!! 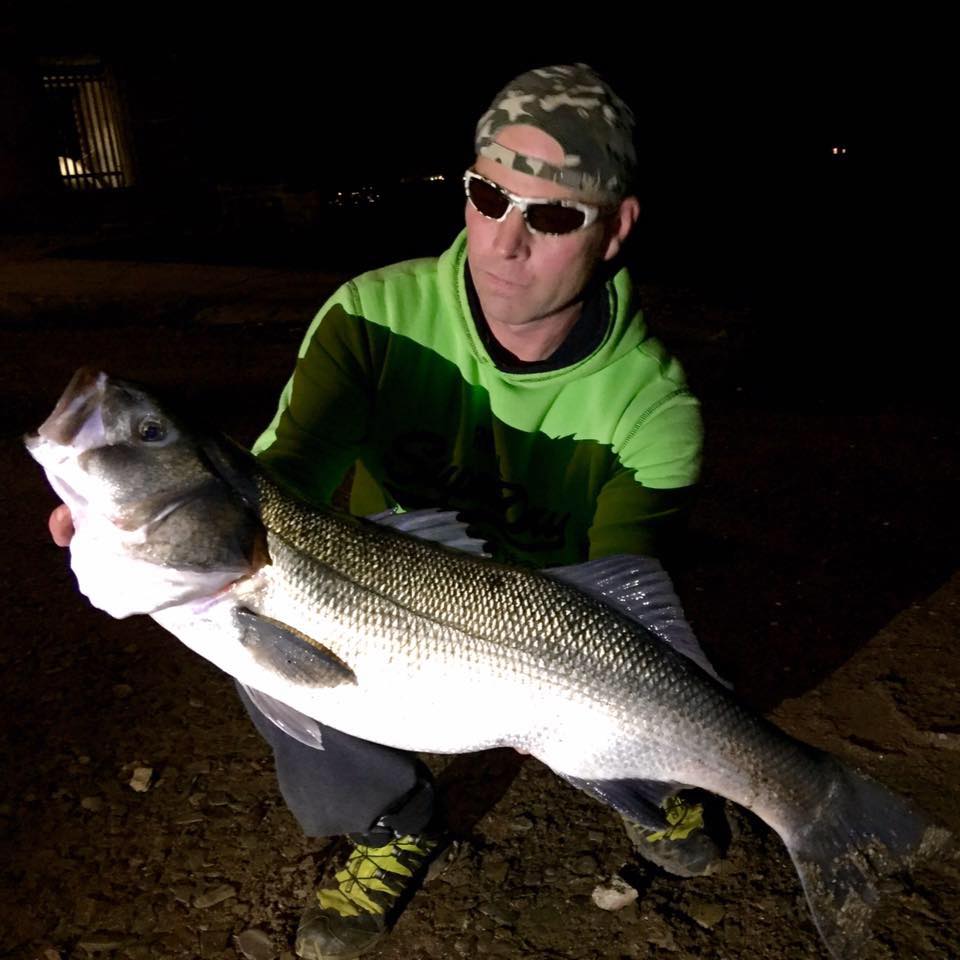