Fishing Tails > All Articles > Reports > Freshwater Fishing > Wind, Rain and a PB Perch.
Not much to report Where are the bait fish? 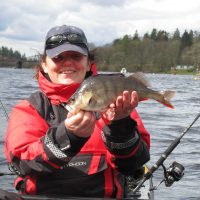 Wind, Rain and a PB Perch.

With no other subject talked about so much on the fishing pages and sites, it pains for me to start this article talking about it…yes you got it, the weather, it literally has had kayak fishing to a standstill for weeks now, with only a few of us managing to grab a hour here and there with not many sea fish to show for our efforts, so with my first weekend off duty in weeks it was decided to head for Scotland and one of my favorite places Loch Ken,

with the Loch being 9  miles long and has various ground from shallow margins, deep weed, and gravel bottom, it really is a kayak anglers paradise, the only fly in my ointment was a very heavy head cold I’d had for a couple of days, so with the van packed with all fishing gear, my new fixed spool reels, and a full box of man sized tissues off we went North bound.

Before heading off I’d had several conversation with my good friend Mark, of Mark Houghton custom lures and had stated that my intentions were to target Perch this weekend, but had been told that the perch would more than likely be in spawn, so with that information popping my bubble I had chosen lures aimed at Mr Pike instead. I have in the past caught perch but only very small specimens and seeing some absolute belters the past couple of weeks got me wanting a size of fish I’d be proud to show off, but it was not meant to be this weekend anyway.

Saturday morning saw our good friend Davy H join us with his newly purchased Stealth Pro-fisher 425 with a very dodgy paint job, this was going to be the first paddle for him, so note self have camera on video, as by this time the wind had picked up causing a good chop on the Loch, so once I had stuffed my pockets with hankies, and had already decided to travel light on this trip which for me means 2 light rods and a small box with lures/forceps we launched by the bridge and headed for the river opposite with being out of the wind and the sun shining warmly it felt good to be on the water again taking a bit to get back into the swing of things. Having paddled as far as we could up the river which gives way to a lovely pond with the river running through it the last few feet in very shallow water over rock which the Kaskazi Dorado slipped over but the Davy had to carry the Stealth due to the rudder being under the kayak, I have in the past had a couple of good fish out of here, sadly not today, but with its quietness, overhanging trees and dappled sunlight it was just a pleasure to be here.

Back on the main Loch the wind had really picked up causing the drift to be to fast for casting into the shallows, more time was spent sitting in the reeds on the west bank than anywhere else I decided that maybe trolling the lures and using the rudder to steer in and out of the bays, and the paddle to slow the drift if needed. Choice of lures would be determined by the depth of the margins, Mark Houghton had already said the fish maybe in the shallow water, so one shallow diver in purple Ayu and on the other side an intermediate diver an AJ shad in fire-tiger, both of these lures I have used before and have been successful with, but I didn’t think they would be this successful so early in the season. Within minutes I had the first pike bending the rod…game on…

For the next 3 hours seen 6 good sized pike come in, a few lost at the side of the kayak but as i remove the middle treble from the lures I use to make unhooking easier and less damaging for the fish could be the reason for the losses, up to that point I’d had fun and the sport from the fish, so we didn’t get the photo…ho hum.

As mentioned I would be trying 2 new reels out this weekend, having searched for a reel that would suit me as a female angler as fishing with lures involves casting and retrieving so weight is an issue to save sore wrists by the end of the day, so I so pleased to say I’ve found what i was looking for, 2 small reels but with good all round capabilities as far as the clutches go, these are paired up with 7 foot light lure rods making a lovely balanced team, also something that i can use all day.

After stopping for a cuppa and lunch we bid good-bye to Davy and his Stealth not being a good fish day for him he headed home, so back on the water we went, heading north this time till we rounded the first bend and had the wind and by this time the rain full force head on to the point where we were down to snail pace, we turned and used the drift to troll again, once we had drifted past the bridge and moored boats I put out the second rod again using the AJ shad fire-tiger and within seconds of the lure going to work the rod bent back over with what felt like a nice fish, a minute or 2 later the smile on my face widened when a lovely sized Perch surfaced, being a good 2 lbs, to say I was over the moon,  at last had the fish that would allow me to say I fished for perch, I was ecstatic.

Speaking to two guys in a boat who had said they had struggled today with fish and the wind give me a little smug feeling that warmed me up a bit…haha. Then bless them they had to stand and watch Peter hook into a good fish that seen us blown to the far side of the Loch by the time we had him ready to come in to be unhooked, the wind had blown us into the reeds and with waves breaking over the side it got a little mad for a while, this was the best fish of the day and certainly the best fight watching try always including jumping like a trout to throw the hook. The last half mile of fishing seen me land 2 more small perch, which I could catch all day, they are such angry little fellas and yet so pretty, and one more pike who showed some scares from nearly been lunch some big girl. In total I had 7 pike and 3 perch, Peter 5 pike, not a day to be sniffed at I’d say, well happy, absolutely worn out and feel like I’d been 5 rounds with Tyson.

What a day, love my fresh water reels and rods felt very comfortable, the fish played nice, and were all bar 2 unhooked at the side of the kayak and swam off strong which i love to see, yes going down to one treble hook is losing me fish but that I class that as the payoff to causing as little damage to these fish as I can till my handling and experience improves.

SUBSCRIBE
Not much to report Where are the bait fish?

One Response to "Wind, Rain and a PB Perch."