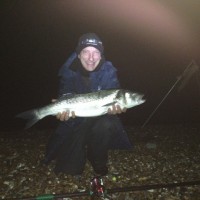 If you want to catch a Bass today, then you could do far worse than head for Preston Beach in Weymouth. It doesn’t have to be Preston Beach, as any Easterly facing beach is likely to produce Bass today. With the wind coming from the east it has created a nice bit of surf, which the Bass love at this time of year. Don’t expect too many big fish, but you should have plenty of sport with the smaller fish up to 4lb. Chesil produced a few nice Bass over the weekend with one of the best that I heard of falling to Ian Clark. The 9lb Bass took a Mackerel head only 5yds out. 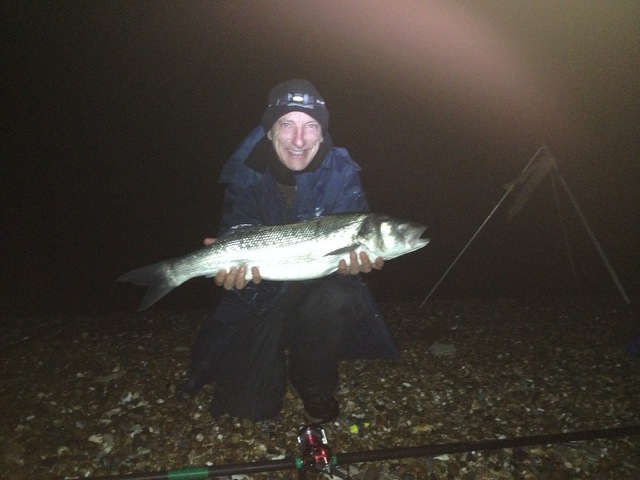 I have been out all weekend on the boat in search of Bass. To be honest it was not one of my best set of tides for catching Bass, as most boats seemed to struggle to catch many. I did however manage to catch two Tope on live Sandeel. The largest weighed about 25lb. Unfortunately I didn’t manage to get any pictures.

One of my friends came down from Gloucester to fish Portland and Chesil last weekend. He managed a lovely Ballan Wrasse of 5lb 2oz from Portland, before heading down to Chesil and losing a 25lb + Conger in the surf 🙁 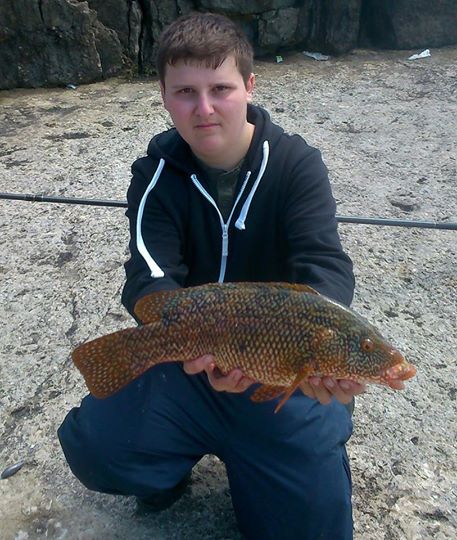 Chesil Beach: Calm with a slight swell and clear water.

Portland: 1m swell and clear water on the west side. The east side is choppier.

Chesil Beach forecast: A reasonable tide and an easterly wind coming from behind you, means you should be able to target Plaice at Abbotsbury. They have stayed out of range for most people recently, but a decent caster should be able to reach them today. I am hearing that there are a few Gurnard and Dabs being caught closer in at West Bexington.

At the Portland end of the beach Gurnard and Bream are showing in better numbers than they did last week. A number of Conger have been caught after dark from Chesil Cove.

You should be able to pick up Mackerel all along the beach, as well as Dogfish and Pout after dark. I have not heard of any Rays being caught this week, but I would expect a few to turn up. I am not sure where the Smoothound have all gone, as they seem a bit thin on the ground.

Portland: It would seem that the Pollock have returned again. Some nicec fish have been taken on lures from Chesil Cove and Church Ope. As usual the Bill produces some nice fish at dawn and dusk. The swell may well affect Wrasse fishing today, as they never seem very keen to feed for the first day when the weather changes.

Portland Harbour: Plenty of small Bass in the harbour, but little sign of any larger ones. A few Garfish and Wrasse have been caught around Ferrybridge.

Weymouth Bay: Both piers are fishing really well at the moment, with Mackerel, Garfish and Pollock on good numbers on the float. There are lots of Small Wrasse and Bream straight down the side of the walls.