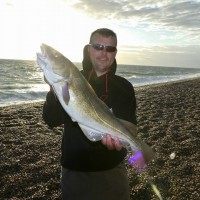 This is going to be a good week

Whats the best conditions for Cod and Bass fishing? The conditions that we will experience over the next few days are almost perfect. We have decent sized tides, that are not too big, and weather that will be blowing hard one day, then backing off to leave windows of opportunity. It is those breaks in the weather that I love at this time of year. We know that the Bass are around in good numbers and that the Cod just don’t seem to have moved far from the shore all year. They will move in to feast in the rough water that the strong South Westerly winds will produce. One thing that has been common over the past few weeks, is that you need to have fresh bait. Lugworm has proved by far to be the best bait at the moment, but fresh Mackerel has also proved deadly as Gary Mitchell proved, when he had a lovely Cod and Bass over the weekend from Chesil. The Bass fell to a fresh Pout fillet.

Chesil produced a good variety of fish over the weekend, which included a lot of Cod, a good number of Bream and Smoothound. Sandy Whitton managed to find some Gurnard, which seem to have disappeared for a bit. It is good to see the fishing is much better again. 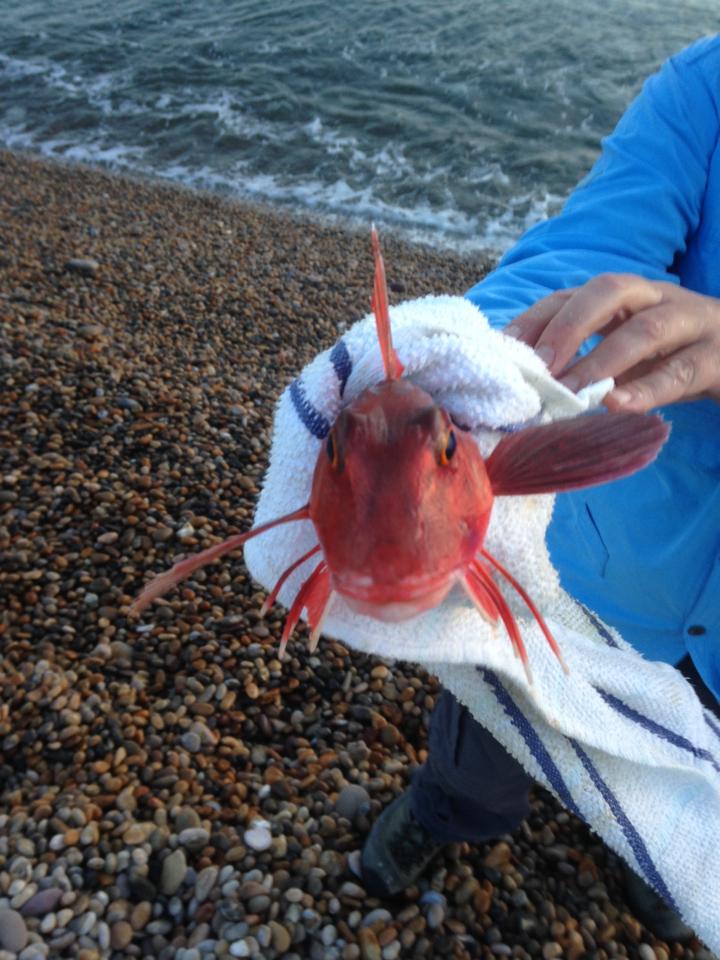 I have had quite a few reports from anglers fishing in Chesil Cove telling me that they have been catching large numbers of Plaice on the sand patches in between the rocks in the Cove. One angler that I can trust with reports, claimed to have caught more than 20 in one session. I know that the Plaice do move down to the Cove in September, so it may well be worth giving the Cove a go. Especially as there have been a number of John Dory caught in the same area. They shoal up in the Cove during September before moving on. The John Dory can be caught using small slivers of Squid or Mackerel, much the same way as you would target Bream. The only difference is that the John Dory’s are normally about 1-2m up from the bottom, so hook snoods need to be positioned fairly high up on a long trace. You can also catch them on lures, such as the Megabass Zonk 120, or the smaller 70 version.

We have a treat tomorrow, as we have a great lure making article from Allan Yates. If you ever wanted to have a go at making your own soft plastic lures, you wont want to miss his article.

Portland:Rough with swells in excess of 2m and lightly coloured water

Chesil Beach forecast: It will all be about timing this week. Part of the time Chesil will be unfishable and others, the window of opportunity will be open. When it is open and the wind an sea state drop enough for it to be safe, I will be out in search of Cod and Bass. I will try and keep the site updated as much as I can, as the conditions change. I will also be putting up regular updates on Facebook. There is a Facebook link on the top of the page.

You will need to be able to cast around 100yds in normal conditions to be able to fish the beach for most of the week. The surf line will extend out to at least 20yds, so you will need a minimum of a 60yd cast to make sure your line is not sitting in the roughest of the surf line. That may not sound like a long cast, but when you are using a big bait and hitting it into a head wind, that is a good cast.

There will be days (possibly Wednesday) when things are a bit calmer. Thats when you will be able to tackle Bream and the Plaice I mentioned about earlier, with smaller baits.

Portland: The fishing around Portland will be tough with coloured water and a heavy swell. Bass and Bull Huss like these conditions, but finding a safe place to fish will be a bit of a problem. You could try the high ledges around Cheyne, as they will also offer shelter from the South Westerly wind. Church Ope Cove is always worth a try during September. It can get weeded up after a prolonged blow.

Portland Harbour: The Bass fishing was not quite as good as I had hoped it would be in the harbour over the weekend, A few small Bass were caught, but none of the better ones I had a week ago.