The welfare of our fisheries

I was recently sent a message from Mick Guyll, asking if I would post his message on the site. I would like to point out now that whilst I think Mike has some good points, I don’t agree with all of them, especially regarding the licensing of pleasure anglers. However I think it is a good that he is so passionate about the welfare of our fisheries, so I welcome debate and comments on the subject.

Evening chaps. Probably preaching to the converted here but does anybody know any contact details for the bodies concerned with the preservation and welfare of our fisheries? I currently work in the western part of France, st nazaire to be precise. I have been here two years and fished pretty much every other weekend primarily for bass. On every outing we have been faced with netters, sometimes so close in they are exposed at low water. The upshot is that I could probably count the number of mentionable fish we have caught on two hands, discounting garfish which seem to be in abundance (due to the ability it has to swim through the mesh I am guessing. )

The French authorities seem to have recognised the problem in that a massive part of their income has now gone in that spear fishermen and anglers alike have now hung up their tools of choice due to the lack of stocks. Apart from the nets, according to a French paper article I recently read there seem to be enormous amounts of nitrates in local waters, I believe these have been washed down the loire estuary resulting in a massive algal bloom that has depleted the oxygen levels inshore and again added to the problem of no fish. There are however an abundance of conger eel here, every night we have been out with the whole squid we haven’t failed in attracting them up to 30lbs. All good and well but I hold congers in the same regard as I do crack offs and birds nests. Are congers somehow immune to depleted oxygen levels?? Couple all this with the average French mans love of raping the low water line for everything that moves and a lot that doesn’t and you have a pretty poor situation. There are bass here but as quoted in a French angling magazine, “if you want to catch a bass we suggest you buy a boat”.

My fear is that we are only 500 miles as the crow flies. I have witnessed people taking tens of undersized bass in the uk, not children but grown adults, I have seen anglers discarding dogfish on a beach and because it was not the intended quarry they are bludgeoned to death and left for the flies. Countries like Australia have strictly enforced laws governing legal size limits and catch numbers. I have seen commercial and sport fishermen alike catching unusable numbers of bass just because they were there and they could.

Pear trawlers operating the south western approaches are responsible for not the odd 1 or two hundred bass but literally 4 to 5 tons of bass in a trawl. Sadly we as fisherman do seem to fall into a certain category that I shall call greedy. Not all, there are many of us who lovingly care for the environment, putting back most of our catch. All that care pales into insignificance when 1 person kills and keeps more than his fair share.

I like to think we still have a fairly healthy fishery in the UK. I was fortunate enough to land an 8lb bass last November from the shore on spinning gear. 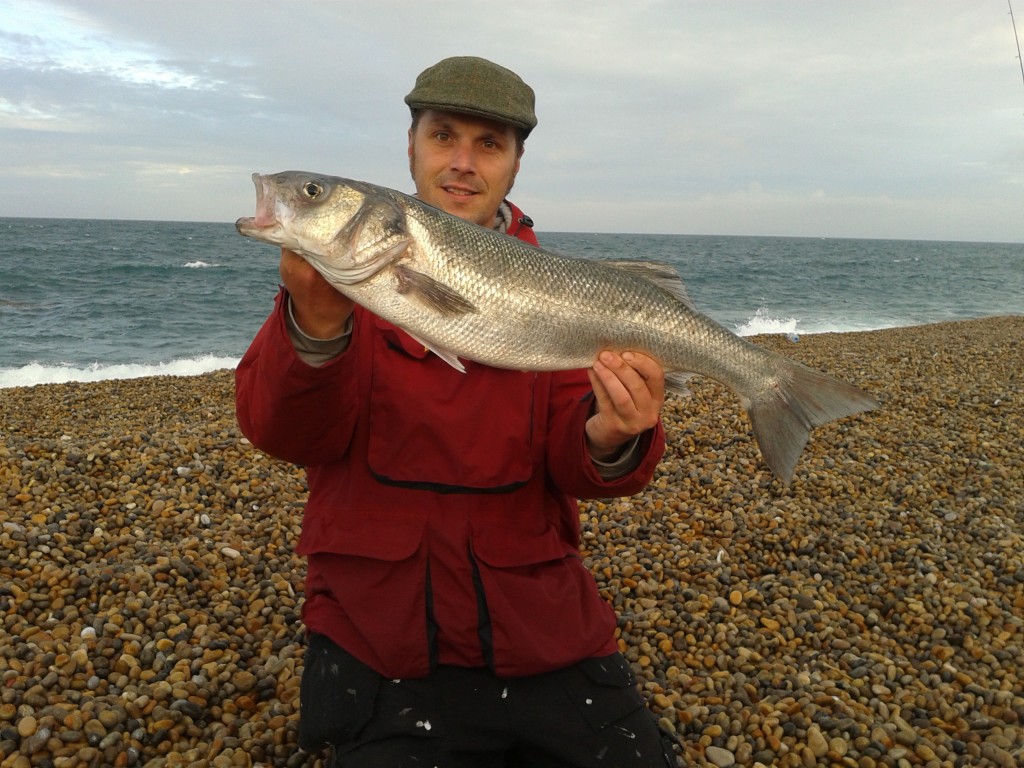 I say lucky but when I think back that was the only decent fish in two years really, they are there but we are having to work harder and longer for a glimpse of them. When I think back 10-15 years I am positive there has been a big drop in the numbers of all fish around our coastline. That said even though we can still catch fish I am sure you will all agree it’s getting harder year in year out. The upshot of my rant is that if some action isn’t forthcoming in the way of licences for leisure anglers with strict rules on the license giving size limits per species then we well may be headed in the same direction as the shores of Western France. The beaches here are beautiful and really scream bass, you get pretty despondent when the reality sets in that it’s all but empty.

A bit of trivia in that the French invented lrf (light rock fishing) ask yourself why would anyone want to buy a special, really light rod and reel combination to target baby wrasse and blennys? Simple, because they have nothing left to fish for here. It seems we are jumping on the LRF bandwagon too, surely that’s not fishing? Surely the thought of going out and hitting that lunker cod, bass, small eyed is what spurs us all into doing it? It’s about time the politicians listened, harsh steps need to be taken now before our fishery becomes a devoid wasteland like it has here in France. The commercial set up is a minefield. With trawlers operating from foreign ports to Hoover up all what we have left, mackerel being dysoned up and tinned in the time it takes to roll a smoke. Large Bass being targeted for those with more money than sense who then have it as some kind of morbid trophy baked in sea salt and served spectacularly in the middle of a table full of merchant bankers. I ask you how much would it cost to eat a panda steak? Not even sure it’s edible but I am quite sure it would cost a small fortune. Why? Because they are endangered. Surely our seas are full of endangered species well not full as the case is, that said why can we still purchase bass and cod quite reasonably at the supermarket? Surely they should be fetching higher prices? So much so that it should be so expensive that cod and chips becomes a once a 2 month treat, not something you can purchase with loose change in your pocket. The extra cost of purchase would negate the necessity for the commercial boys to go out so much. This in turn would see less fish caught and the fishermen still earning their keep. It would need policing strictly but I am sure this could be a start to us seeing a revival of our on the brink fishery.

If they brought in rules whereby a 40 foot boat for example was only allowed to land say £300,000 of fish in a year and that equated to 10 tons that would mean they get £30.00 per kilo. Expensive yes, if we got rid of the middle men and they sold direct to the fishmongers/supermarkets we could still enjoy fish at about £35.00 per kilo. Everyone’s happy. If those in parliament saw fit to bring back subsidised red diesel again that would also be something that would elevate the fisherman’s profits enabling him to have more ‘in port’ time and again lessening the burden on our fisheries. I am no politician, I am however an avid fisherman who has just become the father to a future fisherman. I really believe that if action isn’t taken now then there will be no fish for me to teach him to catch. That surely is unforgivable. The scientists throw their 3 pennies in now and then, sometimes for the good and sometimes for the bad. We are the guys at the coal face and we see the damage first hand. Because we don’t have letters after our names surely doesn’t mean we should be silent, we have a voice? Who do we ear that voice to is my question. Mike guyll

I have had a few reponses to this post one which was a bit too comprehensive to include in the normal comments column, so I have included Fraser Munro’s comment below. Once again his thoughts do not necessarily mirror my own and I am happy to keep this post going:

In response to Mike Guyll’s comments

First let me commend Mike on his enthusiasm and thank Sean for giving him a platform.

My comments are intended to add to the debate and in no way cause Mike grief.

I understand that the bodies currently responsible for regulating our fisheries are Department for Environment, Food and Rural Affairs (Defra) and local Sea Fisheries Committees. They set size limits for fish, issue licences etc. It should be noted that they deal with the regulation of commercial fishing and their regulations only apply to commercial fishermen. This is not exactly the same as looking after the welfare of our fisheries but it is about as close as we are likely to get. Their websites make interesting reading.

I have not done any serious research into the state of our fisheries but do offer the following observations; the tonnage of fish landed commercially is huge, I doubt that any reliable data is available for pleasure fishermen (do you believe all the fisherman’s stories you hear?) but I doubt that all the fishermen on Chesil in a year get anywhere close to the catch of one pair of trawlers.

I have see various estimates of the amount of money spent by anglers per fish caught (in particular bass) and by the time travel, accommodation, parking, boat hire, tackle purchased, bait bought etc is taken into account this can come to hundreds of pounds per fish. As angling is often quoted as the most popular participator sport in the country this represents a huge contribution to the economy and raises a great deal of tax revenue.

On the other hand I can see room for improvement and would like to suggest that one way forward would be for various fish to have the sort of ‘Sport fish’ status that America and Ireland have introduced. See also Bass Anglers Sportfishing Society (B.A.S.S.) and the National Mullet Club.

For example if, shall we say, wild wrasse, bass, mullet and tope were designated as ‘sport fish’ and not traded commercially then a great deal of pressure would be taken from stocks. Restaurants and fish lovers could still buy farmed bass etc (which are also a nice size for an individual portion) wrasse would no longer be slaughtered for pot baits and no one would try to make mullet an affordable replacement for bass. This would be comparatively easy to enforce and revenue from anglers would continue to benefit society.

As this is something that I knocked out during my lunch break it is not the best thought out of documents. Does anyone have firsthand experience of Irish and American bass management? What other ideas do people have?

6 Responses to "The welfare of our fisheries"